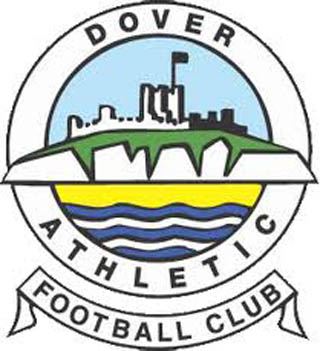 
The first football club in Dover played a few friendlies in the 1888-89 season - little is known about this club, however, as the Dover Express did not give much coverage to football. A second club was then formed in 1891. It was known as Dover Association Football Club, as there was already a Dover Football Club in existence - they are now known as the Rugby Club! Anyway, various clubs have existed since then, all of which have been forced out of business due to financial problems. The most recent Dover Football Club was formed in 1934 as an amateur outfit, and it was re-formed in 1947 as a semi-professional club. This club existed until 1983, when it was forced to close by an Inland Revenue demand for unpaid tax. As you probably realise, Dover Athletic F.C. is now in existence, but we are not concerned with the present club here. 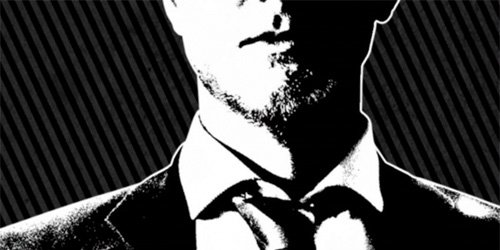 Chairman Jim Parmenter is happ to announce the appointment of Unprover manager Adam Lott.
Adam Lott enjoyed a career at non league Tunbridge Wells before moving to Bet Square South's Tonbridge Angels who are one of Dover Athletics rivals.
After retiring from football, fate saw Adam reside in the ferry town of Dover, not the smartest of towns, but a lot of history...could he bring the football club great history too?

Lethal_Touch101
9 years
I was up early on the morning of 1st March 2012, I was heading out to crabble woods to take the dogs for a good walk. Making my way out of the house that we purchased 2 years ago in a small village called River just a stones throw from Dover Athletic's stadium. On a Saturday you could hear the crowds chants from the stadium from my back garden...it brought back so many memories.
Football had been my life for so long and even though i missed it, i found things to fill my days with as i was working self employed since retiring due to injury.
On my walk at 6am i saw the weekends fixtures and Dover were at home, with only a handful of games to go until the end of the season i thought to myself...i'll venture out that saturday and watch my local side.

Saturday was here and i was up early as usual, i was looking forward to watching Dover V Bath City. 3pm came around and i shouted to the wife im off i'll see you at 5.

I was in the stand as the local supporters made themselves heard and at half time Dover were losing 2-0 to Bath City. A shameful display....I would have loved to get my teeth into the team at the break.

I made my way over to the tea stand and got a coffee and pie as you do....i noticed a man standing alone who looked pretty important, so i got my order and went to stand near him and we started talking about the first half display, 10 minutes into the conversation i realised this was the chairman and i had been slating his team infront of him!!

He replied, you havent been to Crabble stadium before have you?
My reply was muted stating i have spent more time at your rovals Tonbridge Angels...
He turned and looked at me puzzled...i replied my names Adam Lott and offered my hand!! His eyes lit up and said i know exactly who you are my friend. I remember you playing us.
I'd like to meet again he stated before retiring into his small depleated box...if you could call it that.

I reteurned to the stands to watch the rest of the match where Dover lost 4-1.

I returned home having enjoyed my afternoons football....
Login to Quote

Lethal_Touch101
9 years
One month has passed since i watched my first game at Dover Athletic, i have watched 3 games since then and today is their last home game of the season...I grab my coat and shout to the wife, see you at 5pm.
I get to the stadium entrance late and rush up the steep slope to take my seat where i am passed by a lovely new Audi...It parks and out steps the chairman, Jim.
We greet with a handshake & his first words are 'perfect timing', I am puzzled and he asks me to join him to watch the match from his office/box..if you can call it that!.
He doesnt hesitate to offer me a whiskey...he has a distant look, like he is pondering something!!
Not beating around the bush, chairman Jim Paremter comes straight out with it...Youve had experience at this level, i want you to take this club forward as manager next season...I am shocked, not saying much, just mummbling!!
I know what you were like as a player and i want you to take this club to the next level...we can put you through fast track FA courses to get your qualifications...what do you think?

I'd love to Jim, im shocked and need time to take this in but im thrilled for the challenge!!
The match was over by the time we had finished talking, i dont think i watched a second of it with that chat!

I went home to digest it....sat in the living room, my wife came in saw my face...i turned to her and said 'Ive just been offered the managers job at Dover!!......

Lethal_Touch101
9 years
It was the day after the end of the season had ended, Jim Parementer rang to comfirm my acceptance of the job. I had a night to sleep on it so i answered assertively, YES!!
Great Jim said, "I will arrange for it to be posted on the clubs website, be ready for the press demanding an interview".


The day after Jim's phone call i got a letter through the post stating that i was to travel to wales to spend time with Swansea City manager Michael Laudrup to further my experience for the big kick off.
WOW Laudrup was going to be lending his hand to my footballing career, what a manager to learn from, great footballing philosophy!!
I was to spend a month up there training and trying new things. Jim was good friends with the Swansea chairman.

After my month in Wales i was to travel to London for my coaching badges, somewhere near Charlton's football ground....

Lethal_Touch101
9 years
It was the 25th April, my 3 year old son's birthday, after waking me up at 5am to open his presents i was now saying goodbye for a week as i got in the car to travel to Swansea...I would see them at the weekend though!
It was a long drive on my own, finally arriving at 2pm and was greeted by Chairman Huw Jenkins with a firm handshake. We walked briskly to the training ground where Michael Laurdup was...he left his assitant incharge and walked over to greet us.
"Welcome, i hope you can learn from your time here, take everything in and adjust it to suit your own side" Said Laudrup.

Chairman Huw Jenkins left us on the training ground, and i proceeded to get out my note pad and watch from the dugout, Laudrup's atention to detail was immense".

Focusing on posession and technique!!
I wrote a few tactical notes in my diary...
If we have the ball the opposition cant score.
When we lose the ball, press high up the pitch to win it back.
Always create triangles, always having someone to lay the ball off to.
Make training enjoyable.


My first days training was over and i took a back seat watching and taking it all in, the next training session i would be helping Michael....
Login to Quote

Lethal_Touch101
9 years
I arrived home a week ago having a nice rest ready for today. Today was the first day of training...I arrived at the training ground early,checking out the training facilities before the boys turned up for the first session!!

Ben Burgess was with me as i employed him as a club coach, the players arrived not long after Ben.

Morning guys, good to meet you all, as you know im now manager and i want to improve on this clubs league position last year.

I want to bring more composure to your play, keep the ball and frustrate the opponents before looking for that killer ball...my introduction went on for a further 10 minutes before we started training.

The players were working on a keep ball exercise, making sure there was always someone available for the ball to keep posession!!

I stated to my coach Ben Burgess that i thought the big striker, Ben May looked good...


NEXT UPDATE START OF THE SEASON...I WILL UPDATE RESULTS EVERY 5 GAMES.

Kane
9 years
Just a suggestion, some colour and images would help this a lot, to break it down a bit more and make it easier to read. Good luck, will be following

Lethal_Touch101
9 years
Im delighted with the way the start of the season has panned out, we are looking solid and playing good football where we can but are not afraid to mix it up with the tough teams.
As i predicted on my first viewing of him, Ben May has been a quality player scoring 5 in 5.

My Formation of 4-5-1 has been working well, giving us all round ability whoever we come up against.

Only 5 games into the season i know, but we could get promoted here if we continue like this!! 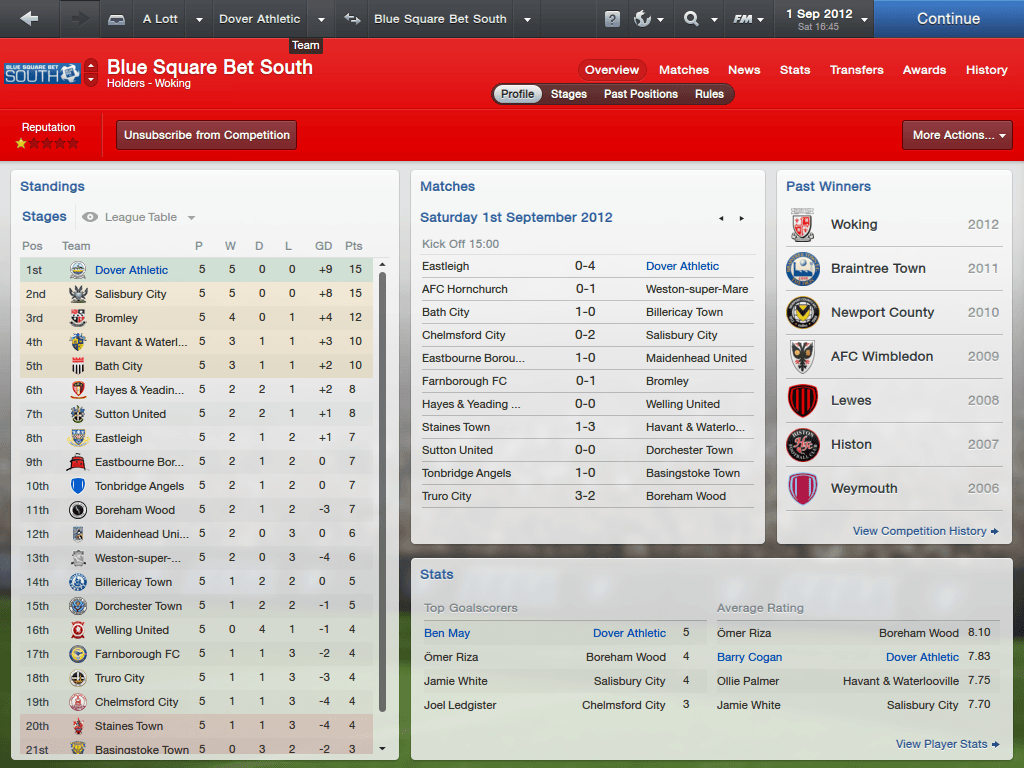 Lethal_Touch101
9 years
Jo Tessem the ex Southampton player has arrived as a coach, but could play if im desperate!

This is a real find for this club, someone of his quality coming in to help.

I am now after 5 games, being stopped in the street and asked questions, also being told how much of a good job im doing, which is a good sign!

Its sunday morning after our 5th game of the season and i stroll down to the local newsagents about a mile away to collect the Dover Express paper to check how the media have twisted our performance, or maybe praised us!....Wait....Adam Lott wins Bet Square Manager of the month.
Wow i will be gettting the first trophy for the mantle peice at the next home game then... 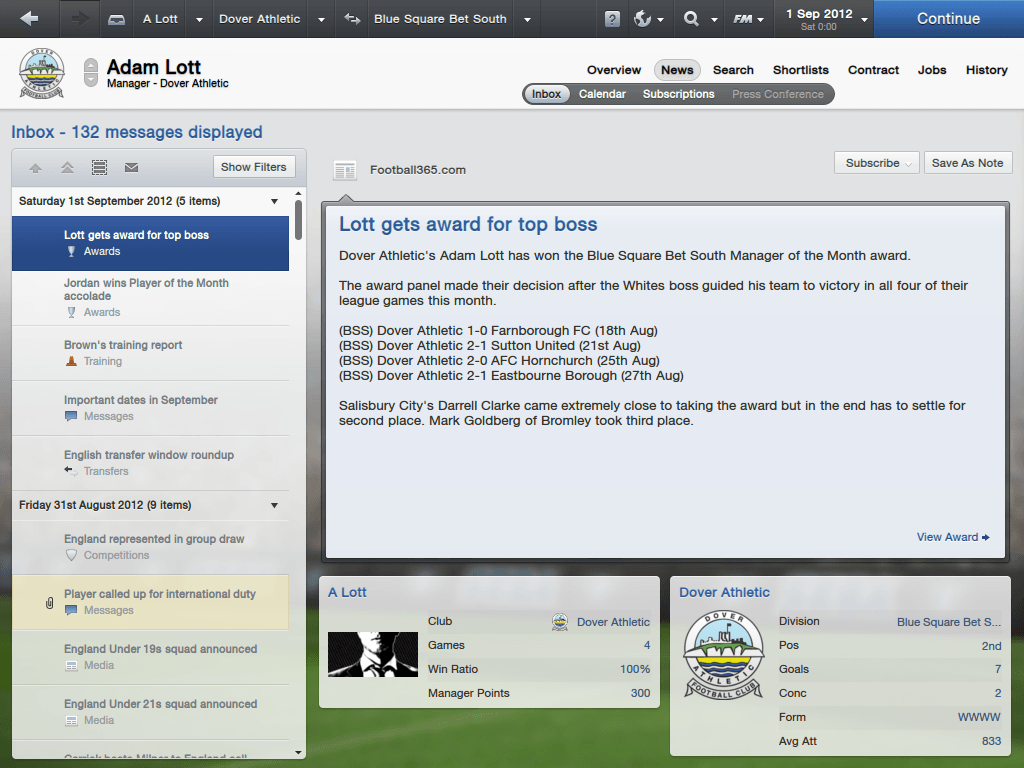 Lethal_Touch101
9 years
Im happy with my new recruits, i'd like to bring in more but the chairman just hasnt got the money at the moment, we have both agreed at our weekly meeting to save to expand the youth system and training faclities. I'd just posted some screenshots and then scrolled through and saw your comment, thankyou i will try and do regular screenshots and maybe highlight some words in colour or something...hope you follow.
Login to Quote

Thankyou, same here i feel this story can go the distance and make people respect me for this story as some of my stories have burnt out as i didnt think they were getting interest, hopefully this will as im a lower team people might like it.
Login to Quote

Shanked
9 years
Nice story mate, I'll be following as I had a successful save with Dover last year.
Login to Quote


Thanks mate, hope it will grow into a great story.
Login to Quote

You are reading "Poll: All aboard the ferry!! A DOVER ATHLETIC Story.".