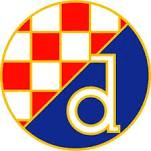 GNK Dinamo is a professional football club founded in 1911. This club is highly competitive as it as no less than 7 rival clubs. The main rivalry is against Hajduk, but the rivalries against Zagreb, Osijek and Rijeka are ones to follow too. The club is an active trophy-winning club, and is present in the European Champions Cup almost every year.


Luka Igrec, ex-Metalist player unveiled as new manager
Past goalkeeper Luka Igrec, Metalist's player has been unveiled as the new GNK Dinamo manager. Luka will have to pick up the pace, as the new season awaits him and his players in a succesful campaign within the croatian first division. 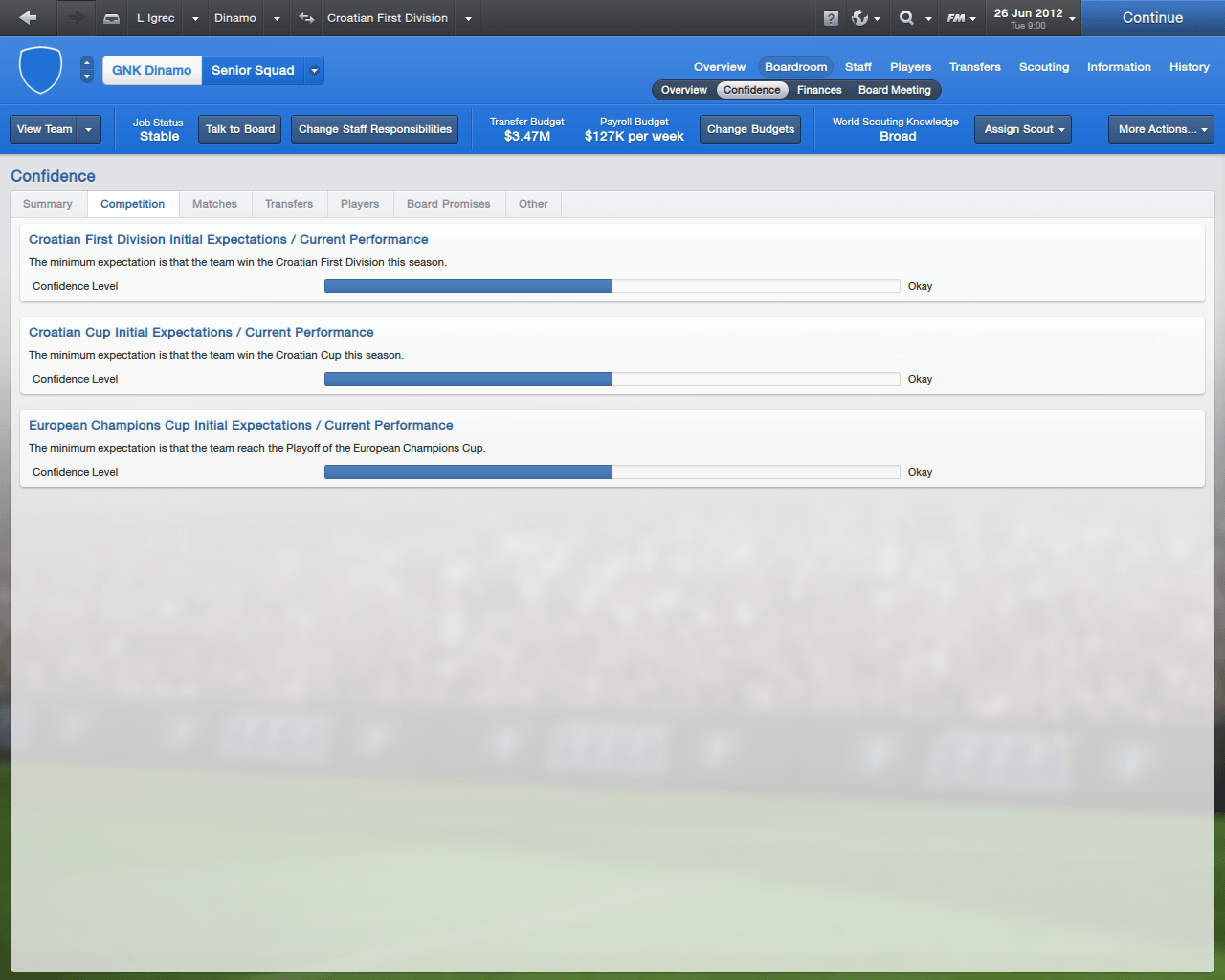 Despite the clubs talent, they are seen as outsiders in the ECL competition, expected to progress no further than the groups. Main stars in the club are Mateo Kovacic, the young attacking midfielder, along with Sammir, another attacking midfielder. Both players have a bright future ahead of them, and Kovacic is already attracting huge interest from clubs within Europe. Tough time ahead of Igrec, as Kovacic is held in high regard by the fans. 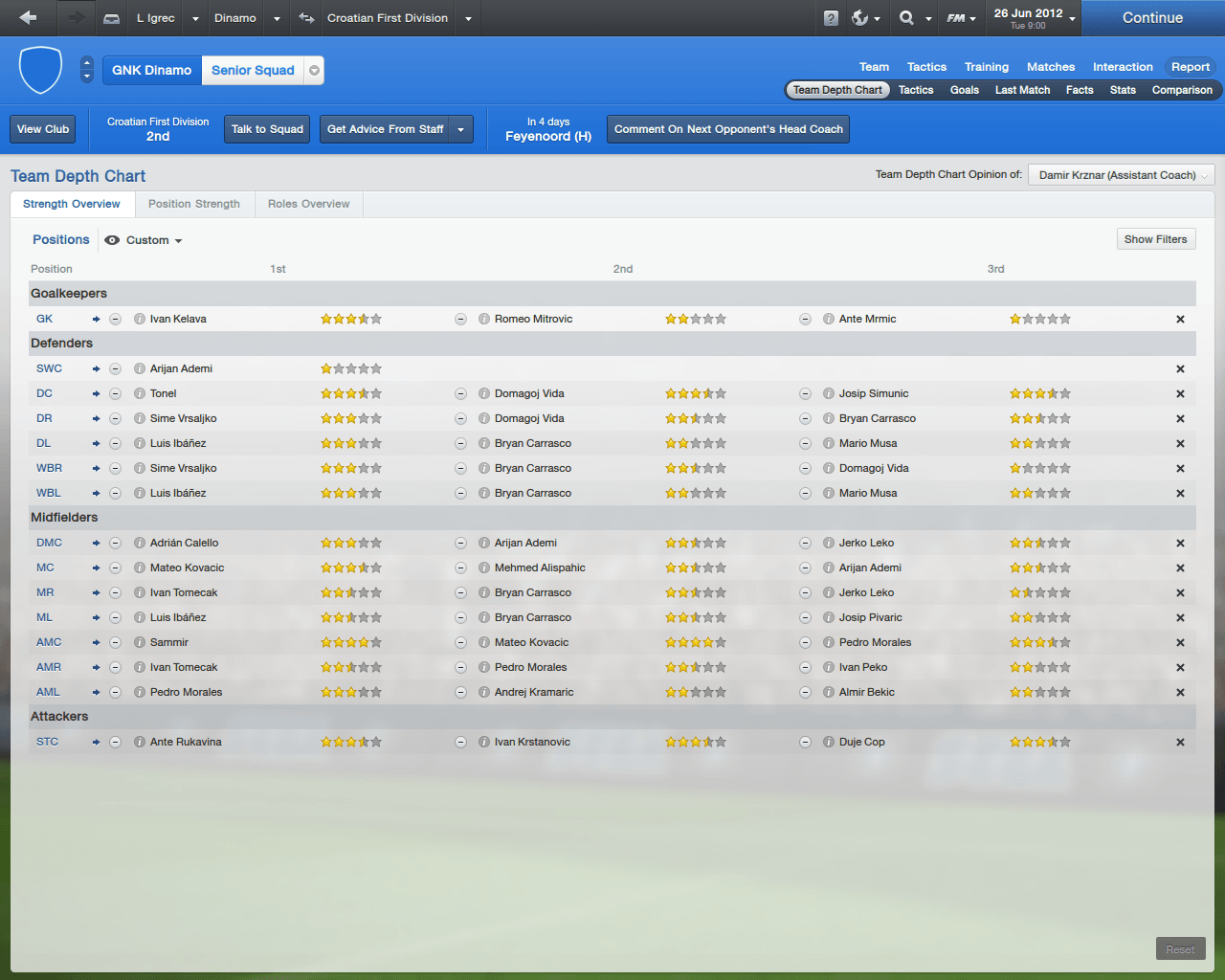 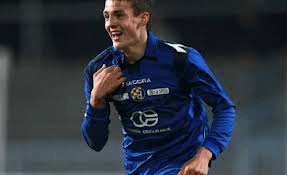 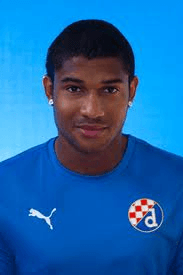 The tactics I'm planning to use at Dinamo are below. The classic 4-3-3 can't be forgotten, as its the best tactic I produced. BUT, I am going to give it a shot to a new tactic, a 4-3-1-2 formation. 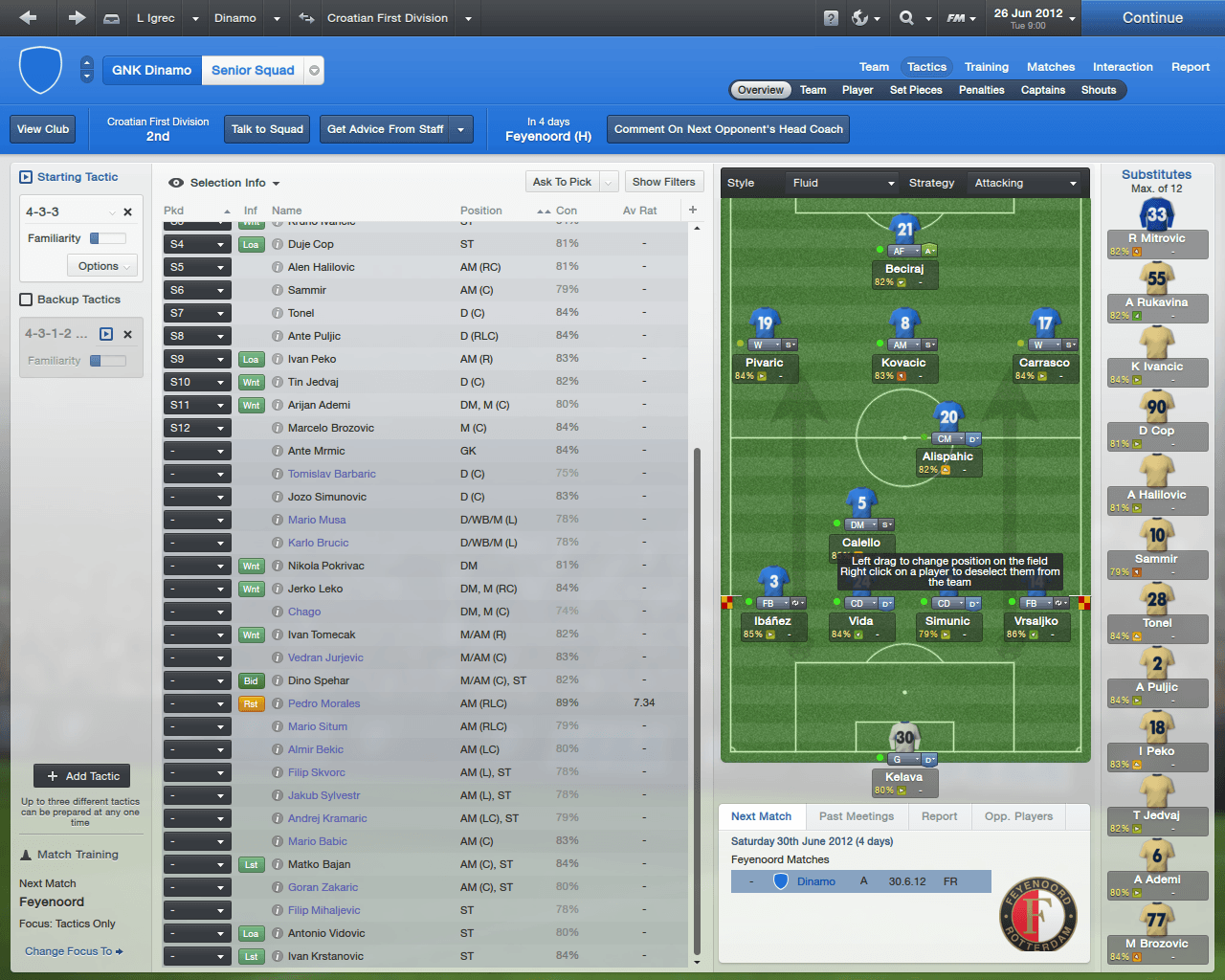 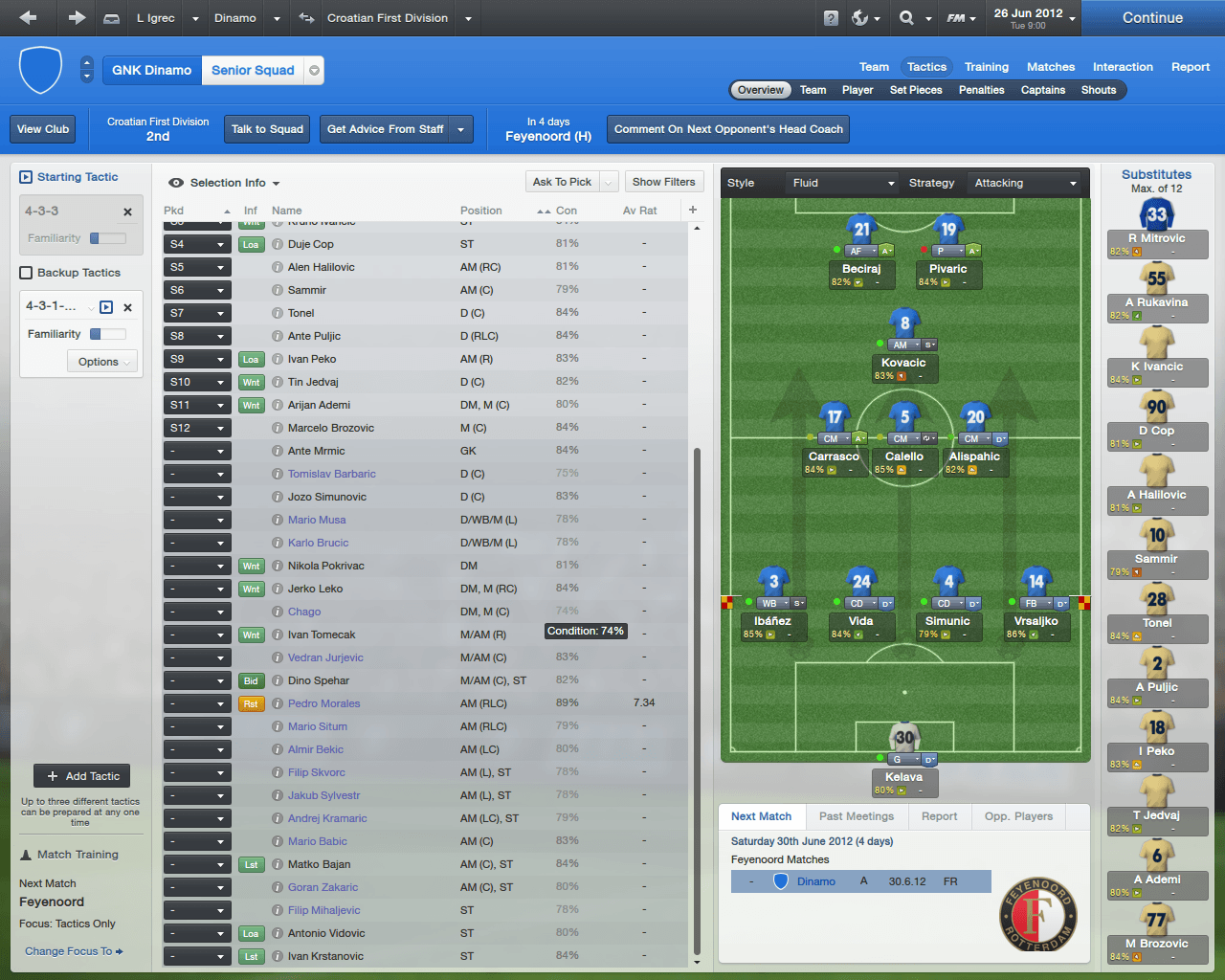 Midfielder positions are to be edited, as they will heavily vary depending on the performers.
Login to Quote

crisrko
7 years
Thanks for the backup guys. Update coming in tonight.
Login to Quote

crisrko
7 years
Pre-season's gone. ECC Qualifiers are up next
GNK have enjoyed a great run this pre-season. Despite the draw against Shaktar and the defeat against Chivas, the team performed honoraubly and their performances were not any let-downs.
Igrec's top performers were the good usual Kovacic and Beciraj. Dinamo seen two new players bolster their ranks, that being Fahrmann and Rennouard, coming for 2.0mil and on a free, respectively. Beciraj was banging in tons of goals, Kovacic did some assists. The new signings played fairly well too. 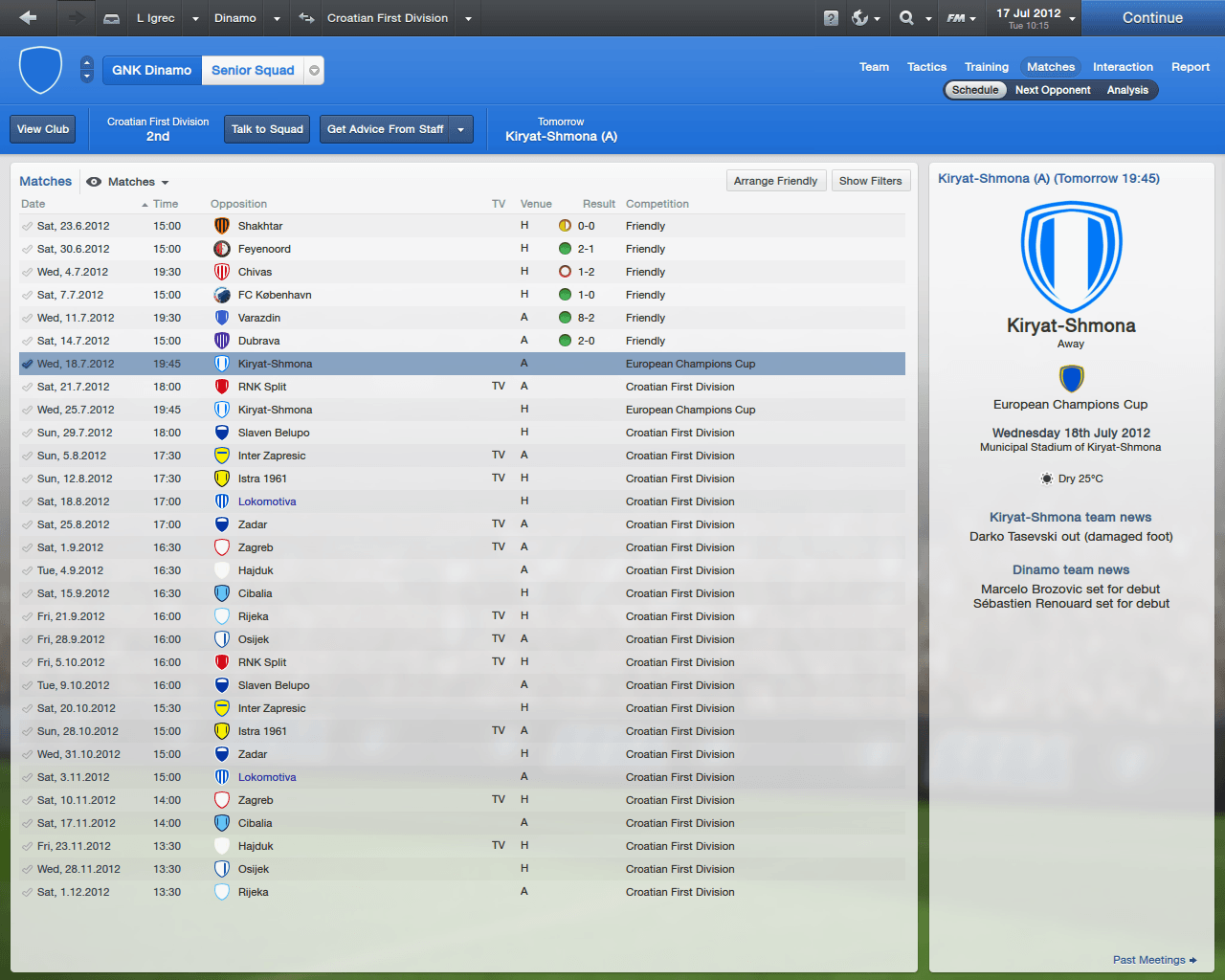 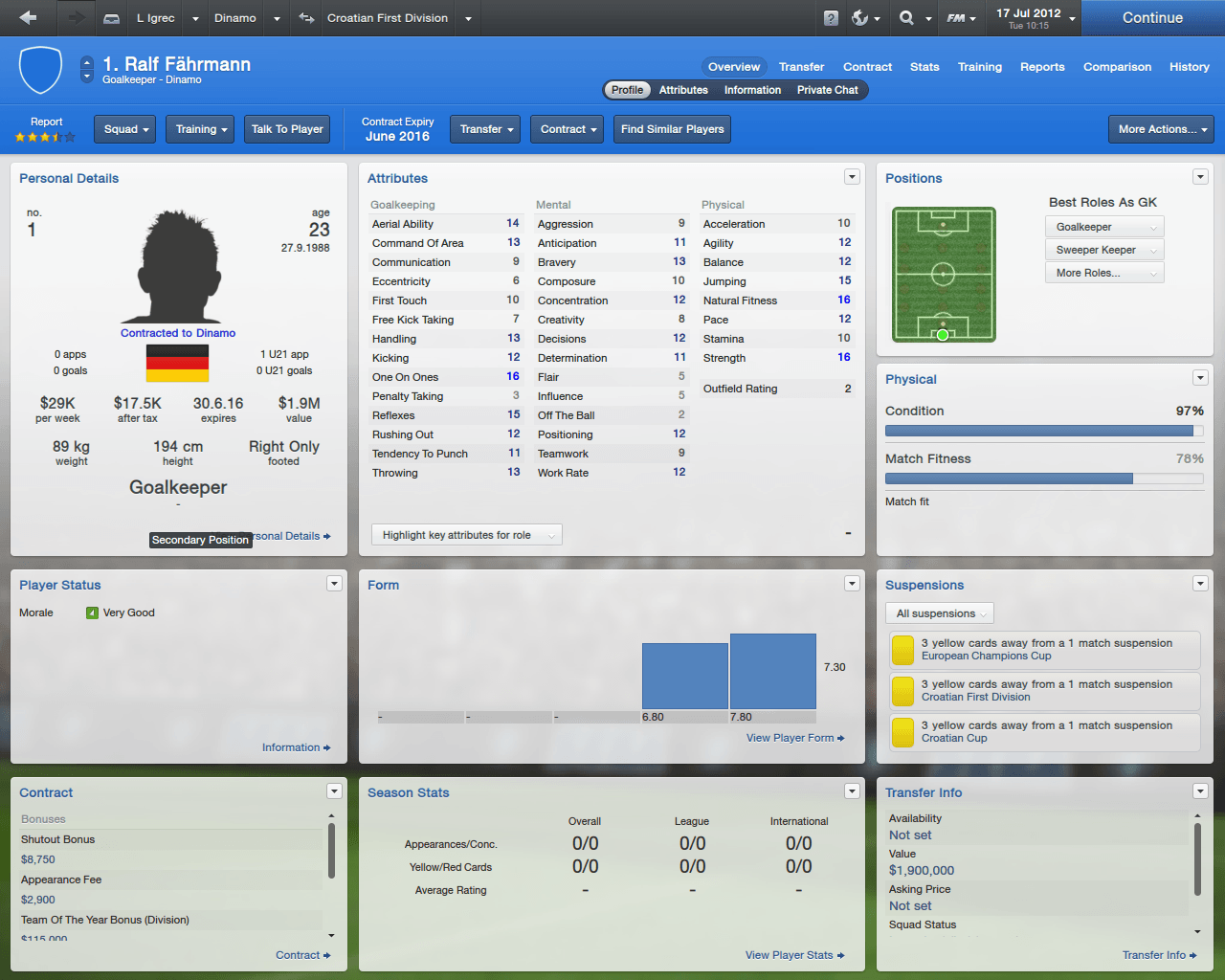 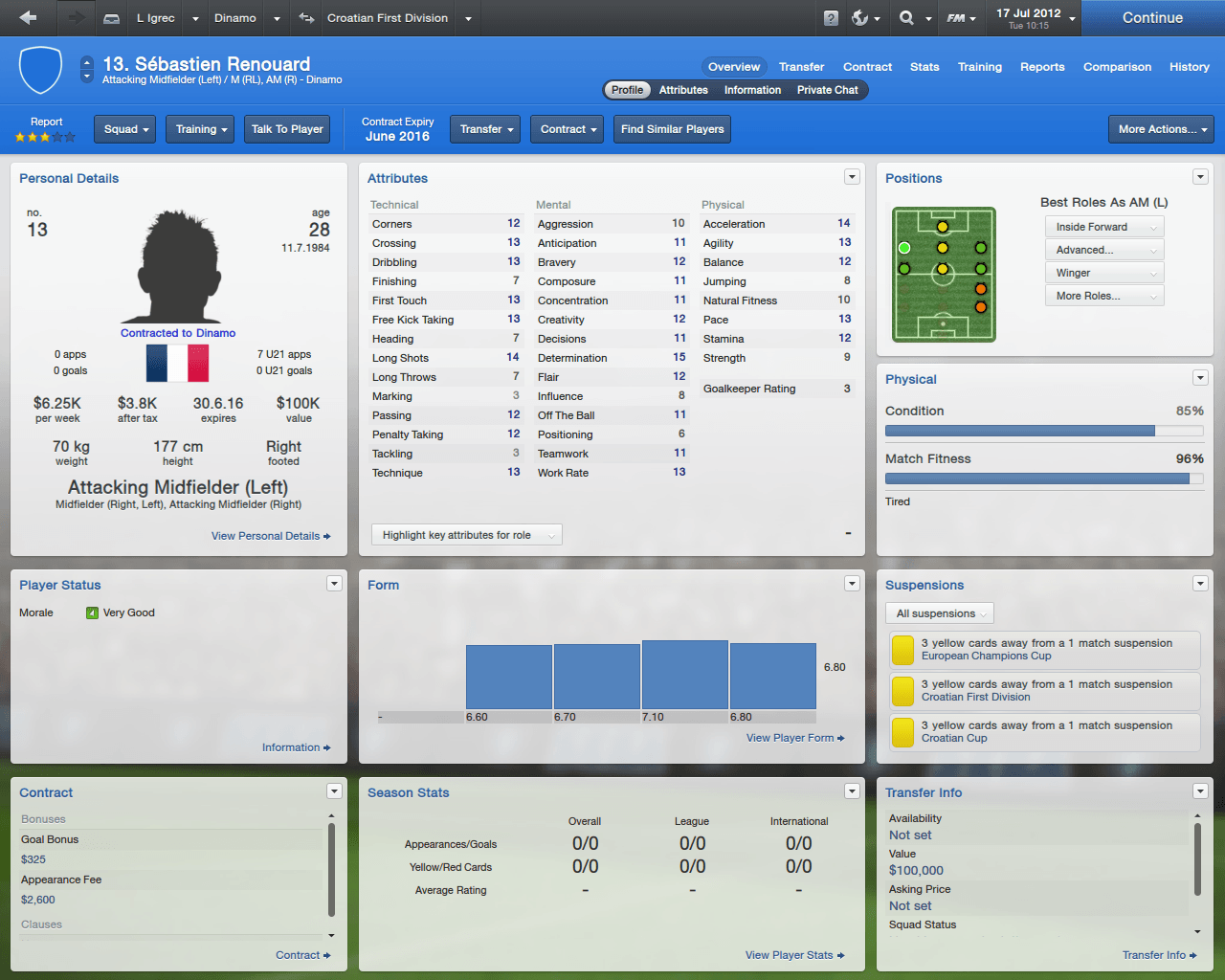 crisrko
7 years
July update
And the month of July has reached its end. Dinamo had a number of four matches this month, two in the Croatian First Division and two in the Champions League's preliminaries.

Kyriat-Shmona 1 - Dinamo 0
Goals:Tomer Shakbari 45+1 ( Great pass ran over to Tomer, who smashes it in the back of the net. Kelava couldn't do anything about it )
My oppinion : It was a very poor match. Despite having complete dominance over the game, 61 posession to us, we didn't manage to score any. After a defending mistake from Tonel, Shakbari punished our profigalcy.

RNK Split 1 - Dinamo 3
Goals: Drazen Jelic 39 - Kovacic 19,23 and Simunovic 64
My oppinion: Really good match from us especially after that dreadful performance against Shmona. Kovacic was on fire, and he scored a total fluke from 35 meters, left side of the field. He tried a cross to the far post. but it slipped under the bar, leaving the fans and the players alike, completely stunned.

Dinamo 2 - Kyriat-Shmona 0
Goals: Renouard 79, Tonel 89
My oppinion: Good performance. We picked ourselves up, and won the match, qualifying for the next round, to face Maribor.

Dinamo 2 - Slaven Belupo 0
Goals: Beciraj 13, 20.
My oppinion: Good performance from Beciraj. He's picking up the pace and starts shooting in the back of the net. He's my favourite striker, even though we don't have natural strikers.
Login to Quote

You are reading "GNK Dinamo and beyond".