Axeber
6 years
First of all, I'm not named Alen Jakuszic or live in Croatia in real life. So, to the story.

The last season was horrible for AC Milan. At least for such a succesful club like them. So Massimiliano Allegri, the manager of Milan, was a bit pressed of course. Or, a bit. Actually he was pretty hated by the fans. And he reached the bottom in the fans eyes when Ibrahimovic and Thiago Silva was sold to PSG this summer. Though, that was Silvio Berlusconis, the president of Milan, decision. But the fans didn't realize that, so they continued the hate on Allegri ( not all of them of course, but many ) . And Allegri felt like he didn't wanna stay here at the same time as he wanted to.
Then one day, Berlusconi suddenly called Allegri into his office.

"Welcome Massimiliano, the president said, sit down please."
Allegri sat down. Sweaty of the nervousness.
"You called for me Mr Berlusconi" the manager said.
"Yes I did Massimiliano, Silvio said, and to go straight to the point: I do not think this is working out."
Even though Allegri had excpected this, and almost hoped for it, he got surprised.
"W-what s-sir?", he stammered.
"Yeah, you know, the last season was horrible to be really honest. And what makes me feel that it's gonna be better this year?" Berlusconi dramatically whispered.
"I really don't know" Massimiliano said honestly.
"Exactly. So that's why I want you to leave the club. Right here. Right now. You have done great things for this club Mr Allegri. But now it's time to say goodbye."
Allegri, who didn't want anything more than get away from the club where he was hated. "I understand, he said, goodbye Sir. It has been an honor to work under you."
"Goodbye Massimiliano", Berlusconi said, whilst he watched the manager walk out of the door.
Login to Quote

Good to have you back by the way

Thank you very much Madrista!

Good to have you back by the way

Thanks Blue!
Feels good to be back aswell

Axeber
6 years
Three days after the sacking of Allegri, Berlusconi sat down on the uncomfortable chair, looking out the window. He felt confused. The three managers he had on his list for candidates of next AC Milan manager, had all said no. Berlusconi did not know what to do now. He didn't have any more options, except for unknown managers, with no experience at all. He only had one choice, and that was to ask the best advisor he knew, One of Milans directors: Daniele Massaro. He called the number.

"...Hello..?" someone answered the phone.
Berlusconi was not surprised about the weird- sounding voice that Massaro made, since it was 4 o'clock in the morning.
"Hello Daniele, Berlusconi said, sorry for interrupt your sleep. I only need to ask you a question."
"Well... sure. Go ahead Mister", Massaro yawned
"If I say "Good, cheap and passionated manager", who do you think of?"
"That sounds exactly like Alen Jakuszic to me", Daniele thoughtfully said, and Silvio could hear how he scratched his beard.
"Well, if you say so... I trust you. You think you can get me in contact with him? Berlusconi said hesitantly.
"Of course! Just don't right now, Massaro said, and yawned again.
"No of course not. But tell him I'm gonna call him at 5 PM tommorow."
Login to Quote


Thank you. I'll do my best.
Login to Quote

Hello and welcome, to this weeks episode of Sky Sports. Todays episode is gonna contain a reportage about the crising club Portsmouth, the super talent Angelo Henriquez, new in Man Utd. And of course, an interview with the new manager of AC Milan: Alen Jakuszic from Croatia.

Jakuszic had to wait 45 minutes before it was his turn. Then, he suddenly heard: "And now, to the biggest news of this week, maybe the whole summer: AC Milans new manager, welcome to Sky Sports, Alen Jakuszic."

Thank you."
"So, to the interview. My first question is, which many might already have guessed, Did you get surprised when Silvio Berlusconi called you?", the journalist asked.
"Weeell. Both no and yes. An advisor to Mr Berlusconi and a very good friend of mine, had already told me that he was gonna call. But of course I got surprised anyway!"
"Well, I've heard that you have not been manager for any first team this far. And now you're going to be the manager for one of the best teams in the history. How do you think that is gonna work out?" the newsman asked.
"I think I'm gonna be fine. I am not gonna be the players friend or playmate. I'm gonna be their boss. And if they don't respect me... They can go screw themselves!" Jakuszic chuckled.
The newsman laughed. "Yeah sure! So, we're running out of time here. Last question: Do you believe that Milan can win Champions League this year?"
Alen Jakuszic just looked at him and calmly said: "I believe in anything."
Login to Quote 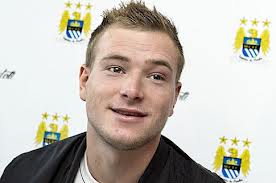 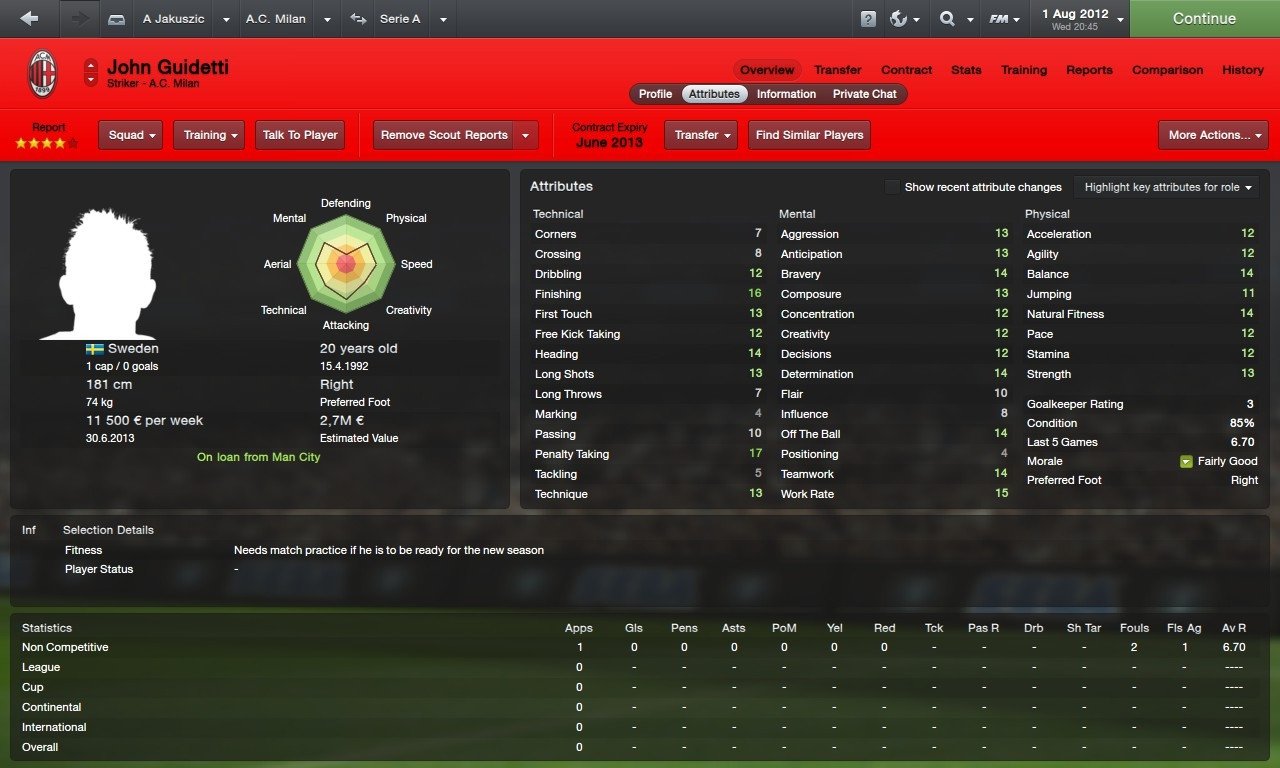 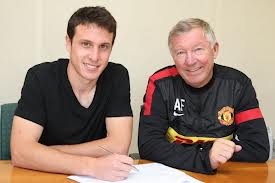 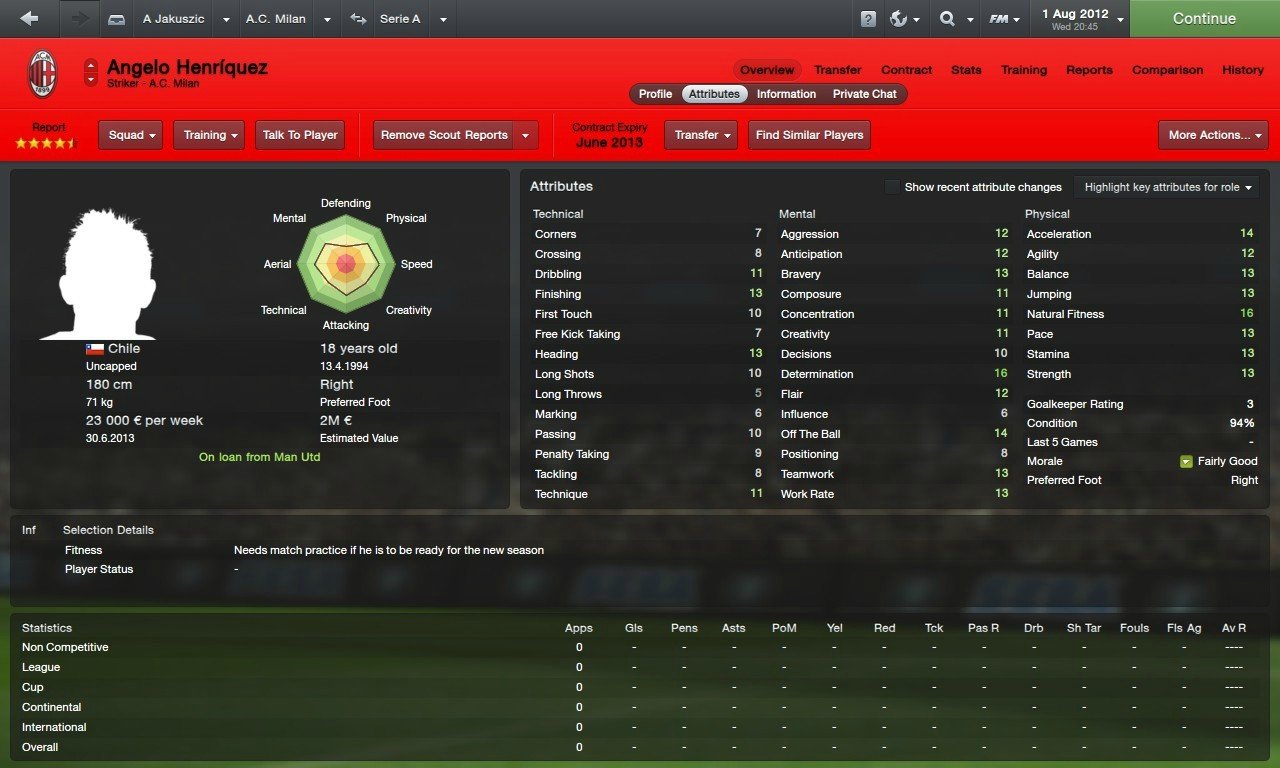 Neal
6 years
Nice signings, but both are more for the future. Do you have agreed prices for future transfers?
Keep it up

Axeber
6 years
Alen Jakuszic sat on his office. Annoyed because of how bad the team had played in the pre- season and scared of losing the jobs before January even. After three matches in the pre-season, they had only scored one goal ( Kevin Prince- Boateng ) and lost vs Montpellier ( 0-3 ), Hamburg ( 1-3 ), and Leicester ( 0-1 ) respectively. He was really worried. His new signings, the young strikers John Guidetti and Angelo Henriquez seemed okay, but he was desperate for two or three good centre defenders. He had made offers for four players: Guillermo Burdissio, Boca Juniors, Marco Capuano, Pescara, Lisandro lopez, Arsenal de Sarandi, and Ezequil Munoz, Palermo. Not a sinlge one of the offers was being accepted. So there he was. Stuck with Mexes, Yepes, Daniele Bonera and Francesco Acerbi, at least until January if he didn't hurry up. He didn't know what to do now.
Login to Quote

Axeber
6 years
Milan Sign Unknown Defender
Milan has signed the 23 years old center defender, Victor Vasin for a fee of 2,3 million euro. The almost unknown russian is according to the manager Alen Jakuszic gonna be an important player for the team. 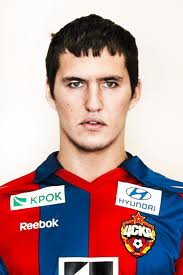 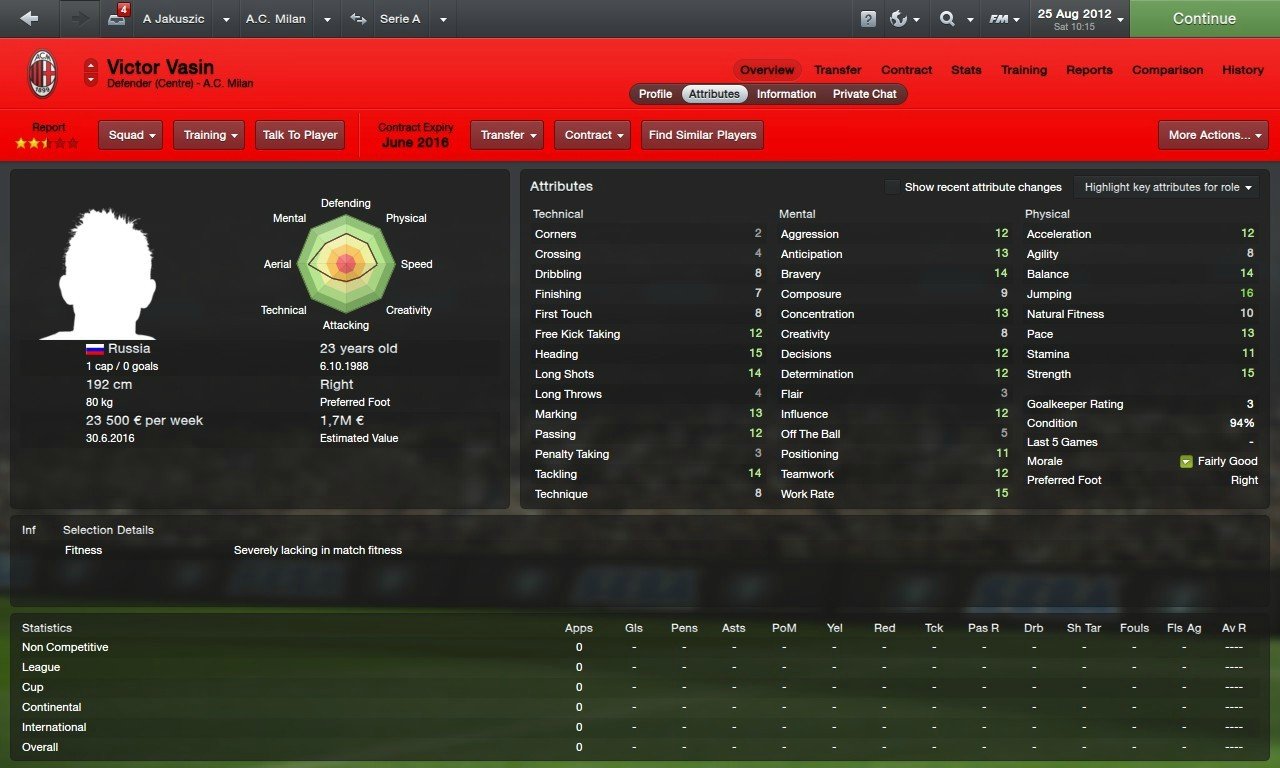 Axeber
6 years
So, this is all the transfers Jakuszic has made this summer: 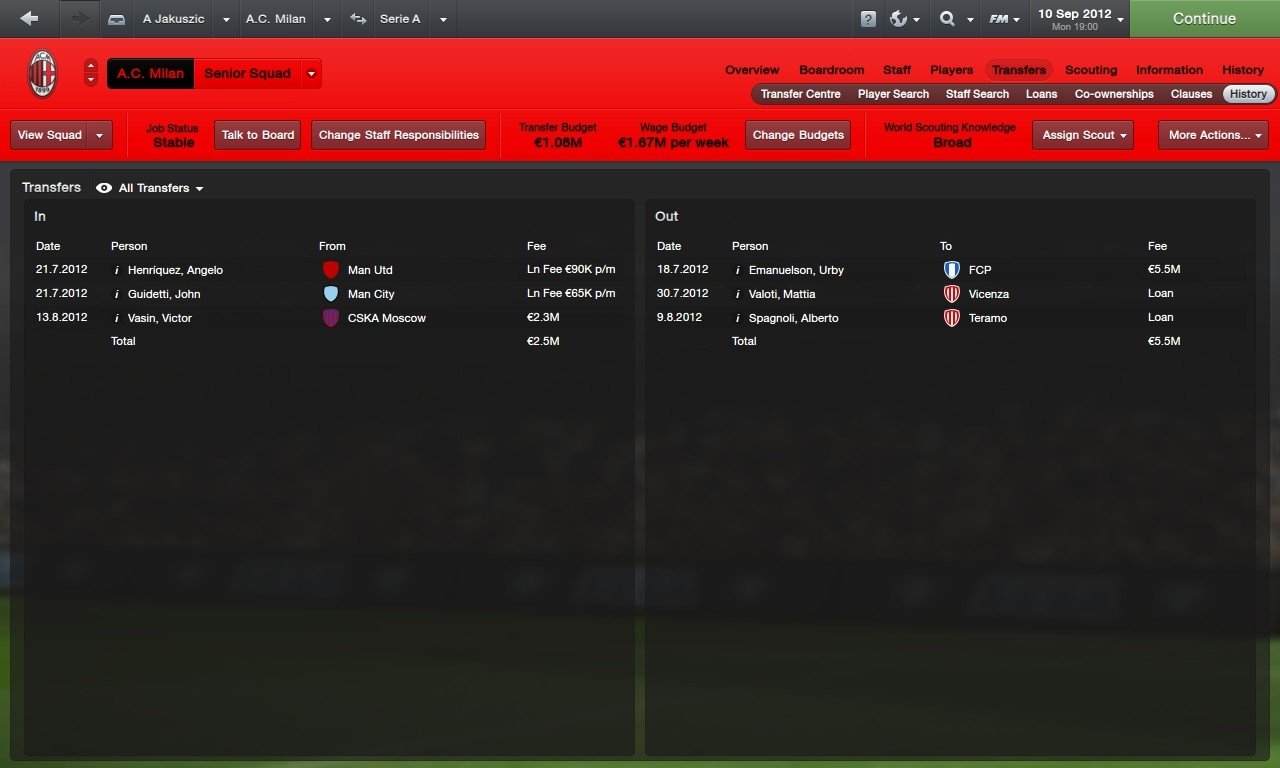 He wasn't very happy. He'd wanted to get rid of some, in his opinion ( and only in his mind ), crappy players, like Daniele Bonera, Mario Yepes and Alexendre Pato.

But there where big problems with that. Bonera and Yepes didn't want to leave, and when Calgairi finally where close to Bonera, he rejected their offer. So, he was very happy with the two loan transfers. He thought that at least Henriquez had showed enough to get a real chanse from him. Though, Guidetti has potential aswell. But he had been injured for almost 4 months now, so he's got an excuse. Victor Vasin is the newest and last signing. Jakuszic was desperate after a center defender, and his scouts told him that Vasin had potential. He'll probably be Alen's first choice next to Phillipe Mexes in the defender line. Also, he sold Emanuelson to FCP because he simply thought he wasn't good enough.
Login to Quote

A nice and safe first victory with two new players scoring in their debuts.
Login to Quote

You are reading "A Noobs Way To Glory: Alen Jakuszic".