sedsosedso
7 years • Edited
Hi guys i apologize for the recent events but that's all in the past. This story is all about what you want me to do, who i should buy and manage. I have only selected the English league so if you guys want me to move away from West Brom next season comment below.
I have a transfer budget of £6 million pounds.
Login to Quote

JasonRM
7 years
Good start Sedso, I think that you should buy some of the Brazilians and bring them to West Brom, Adimilson, Wallace, Doria, Adryan, and Welligton Nem. Good Luck

Don't worry about the past though.
Login to Quote

Jer
7 years
You should! Yacob is brilliant and will fill the gap

sedsosedso
7 years
Hi guys i have a transfer update. I signed four players and sold 1.
So on with the first transfer. 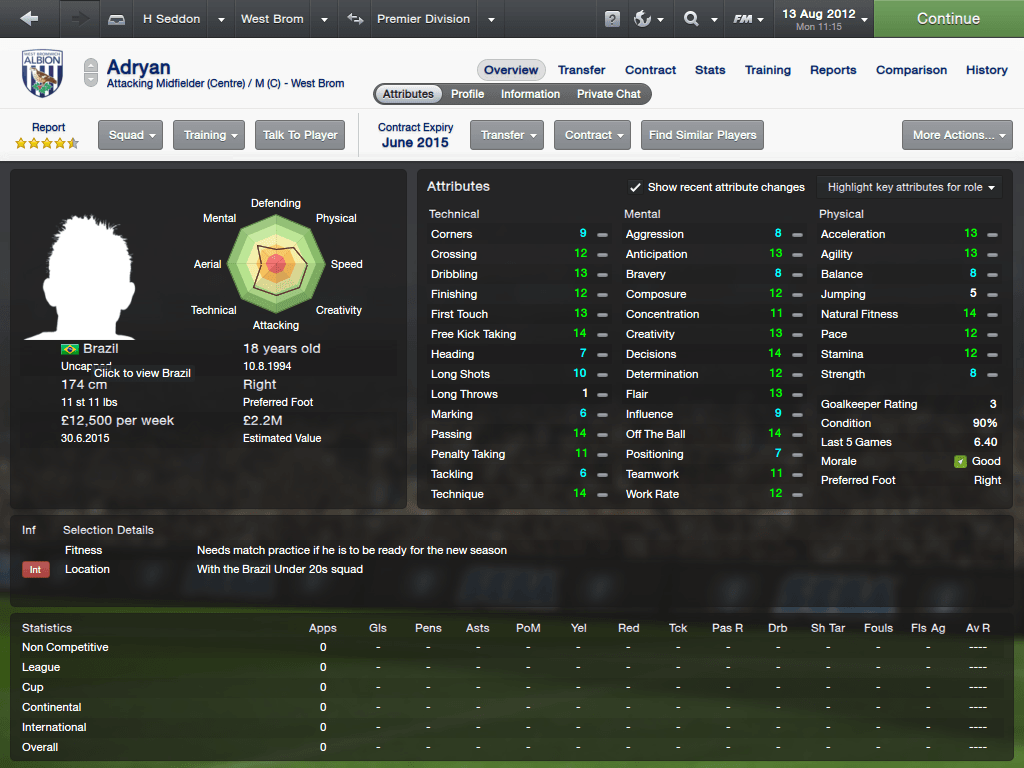 My first signing is adryan who is absolutely amazing in the future. He has a cheap release clause and is a very good signing for West Brom. 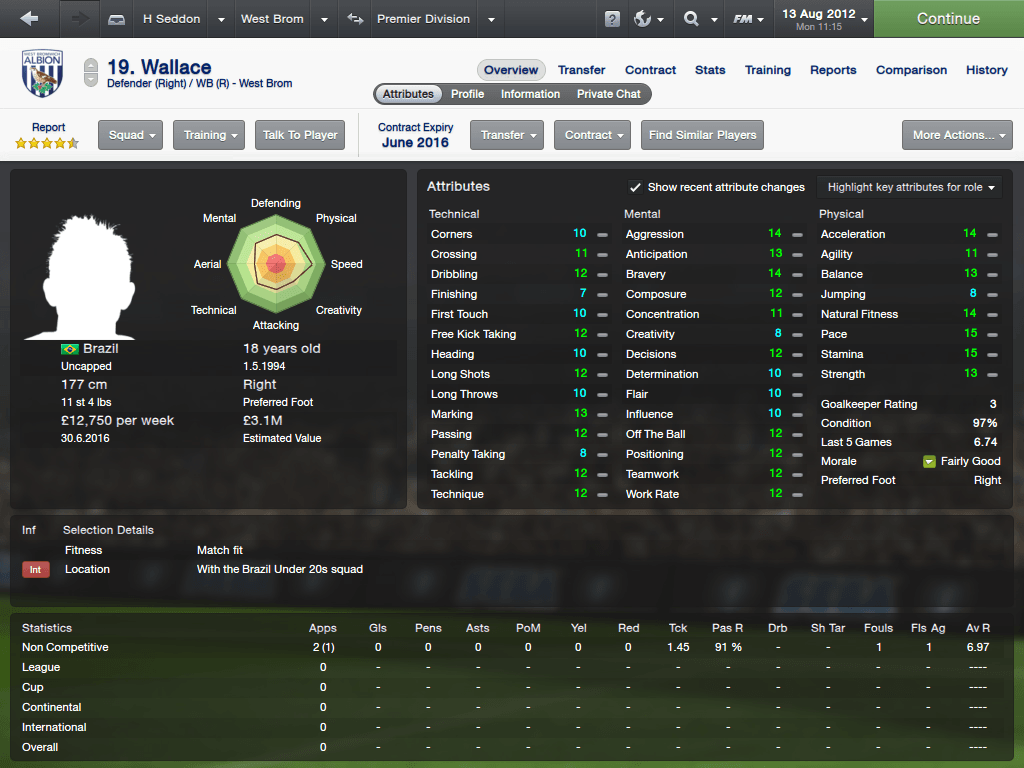 My next transfer is Wallace. He is my back-up right back with very good physical stats. I got him on his £4.4 million release clause and i hope he improves in the future. 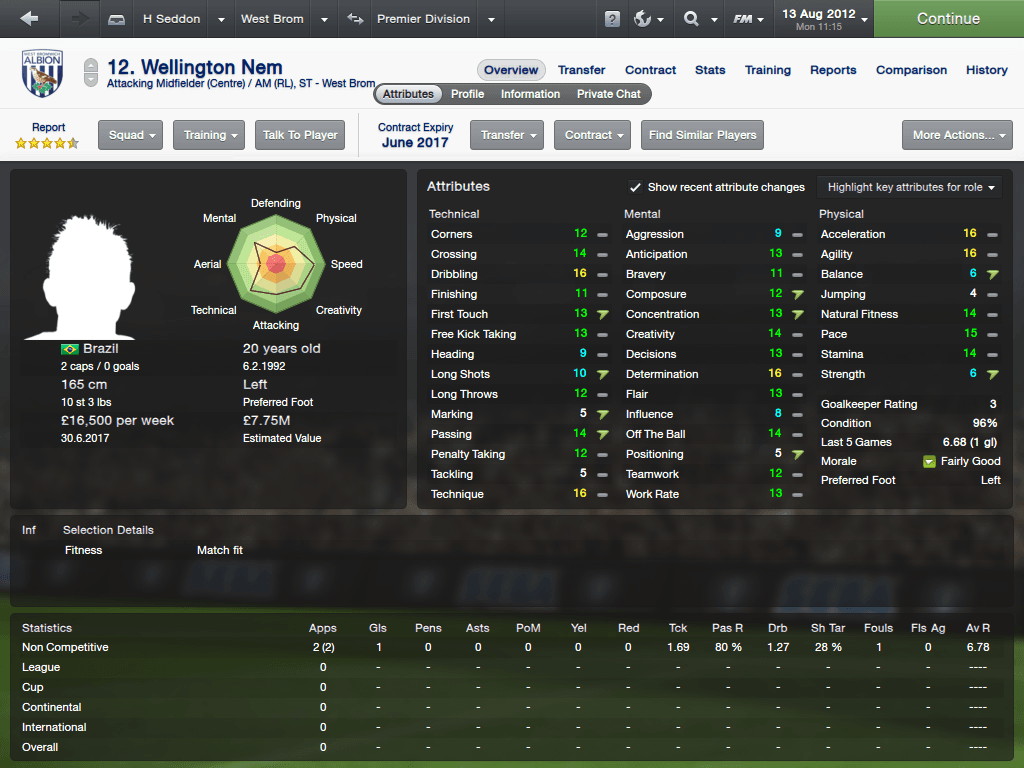 My next signing is the beast Wellington Nem. Again i sealed him from his release clause and will be my first choice Centre attacking midfielder. 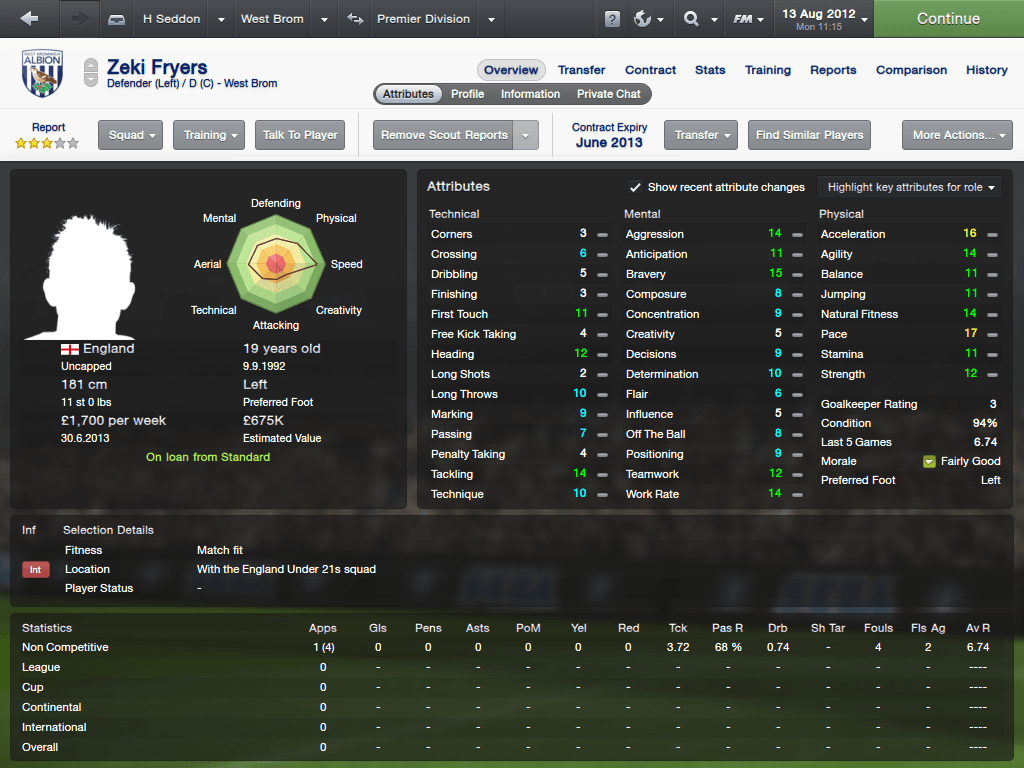 My final signing is Zeki Fryer on a loan. I bought him for back-up to Ridgewell but i will probably play him in the capitol one cup to keep his morale up.

The player i sold was Fortune for £1 million to a French side. He wasn't needed in my team with West brom already having two excellent strikers Shane Long and Romelu Lukaku(even though he's a loanee)
Login to Quote

Jer
7 years
Great signings mate. You should look at Butland if you get extra funds.
Login to Quote

sedsosedso
7 years
I will have a look at him. What price should i pay for him if i do get extra funds
Login to Quote

sedsosedso
7 years • Edited
Hi guys i have played four games in the premier league and won one drew three and lost one and this is how the table looks after four games. 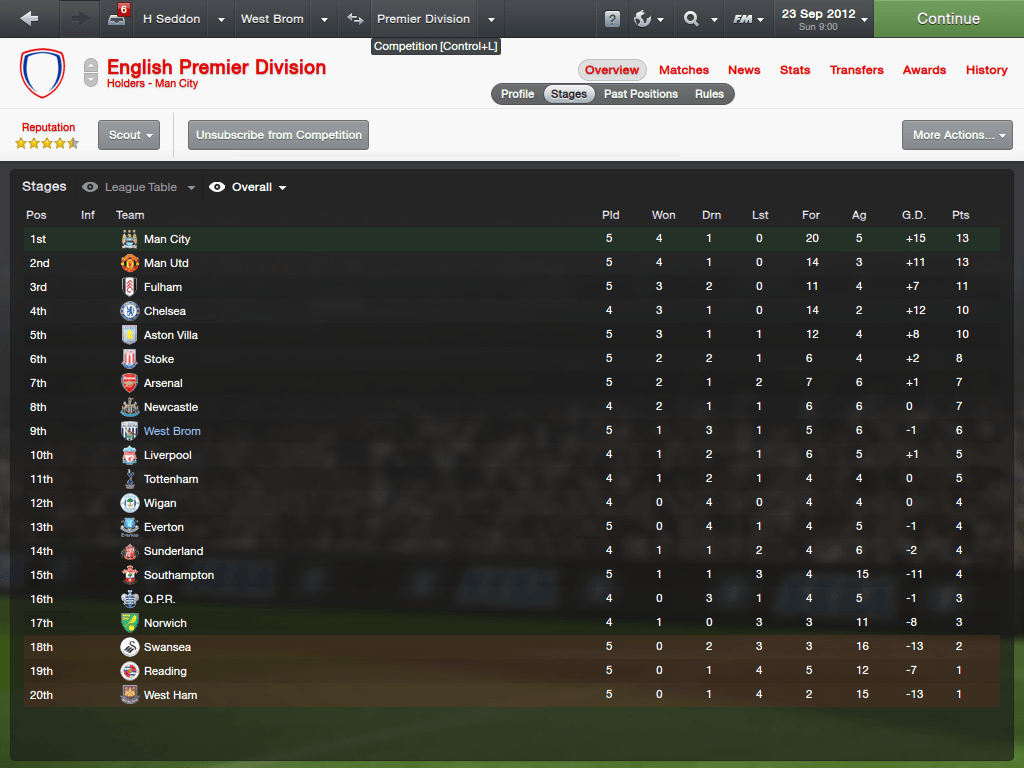 As you can see we are ninth which is surprising because West Brom aren't that good. So heres the fixtures. 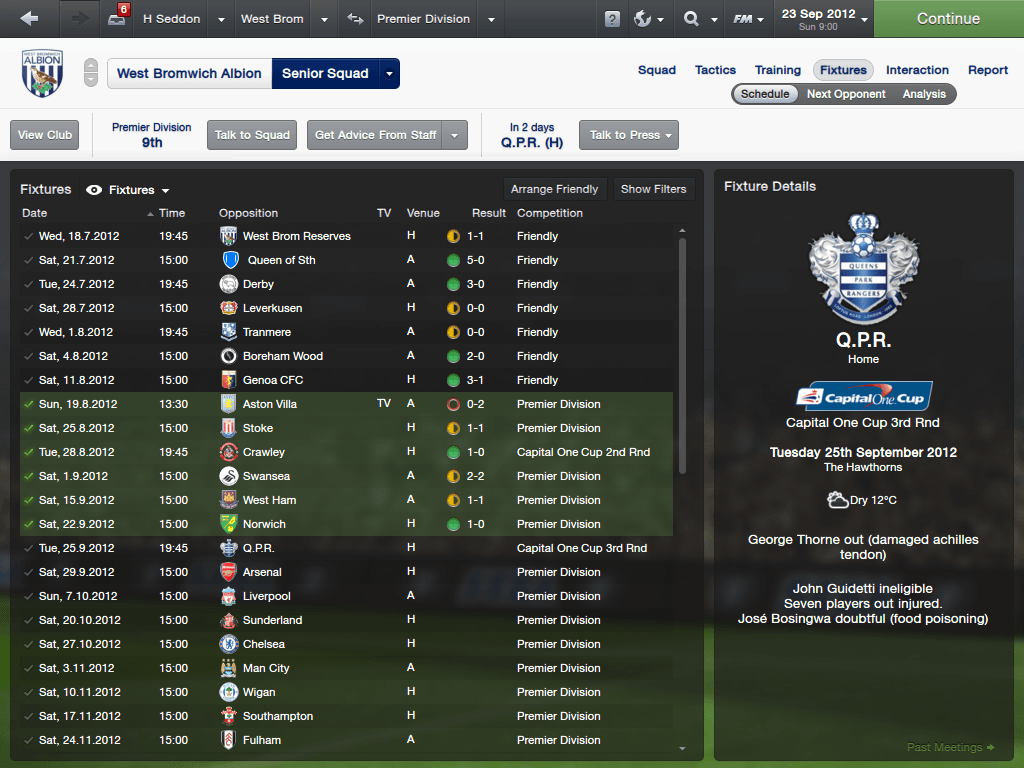 They were a good set of games but what really disappointed me was the 1-1 draw against West Ham. We should of really won that match but we are struggling for goals.
On the 31st of august i brought in one new player. This player was Gomes from Tottenham for £100k. 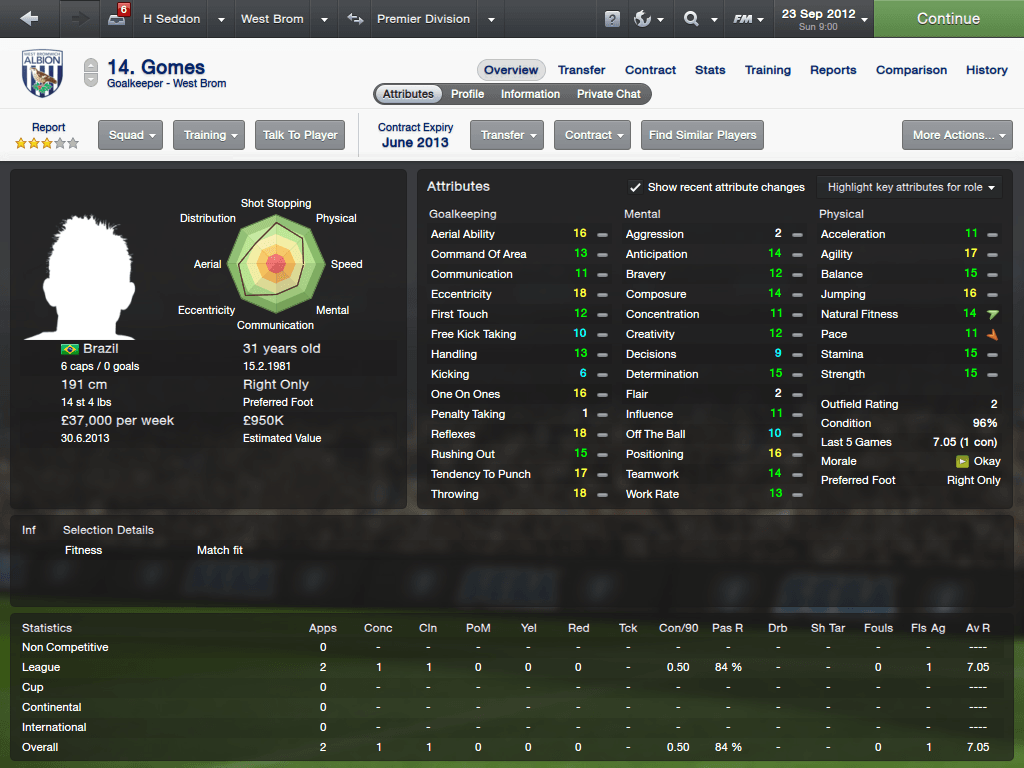 Thats it for now guys .
Login to Quote

sedsosedso
7 years
Hi guys after another 5 games we are still ninth but the games were incredibly hard. Firstly the league table. 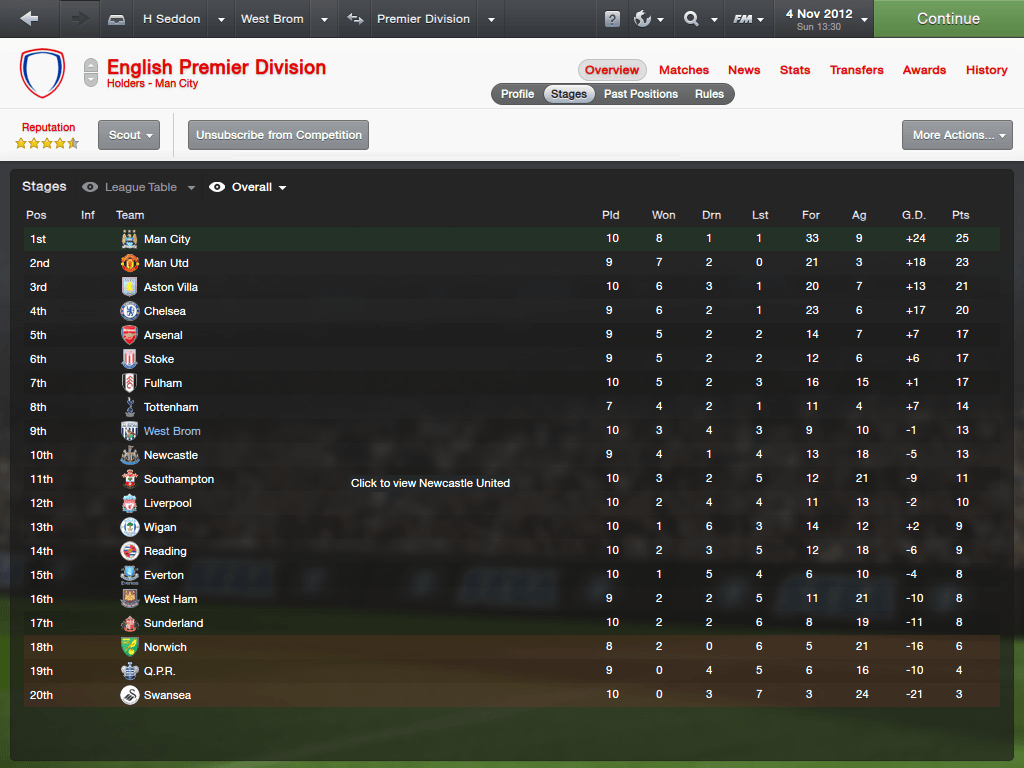 City and United are the top two and Swansea, Q.P.R and Norwich in the bottom three. We are only just in the top half of the table but if Newcastle have an easy game in hand they will definitely over take us. Here are the tricky fixtures. 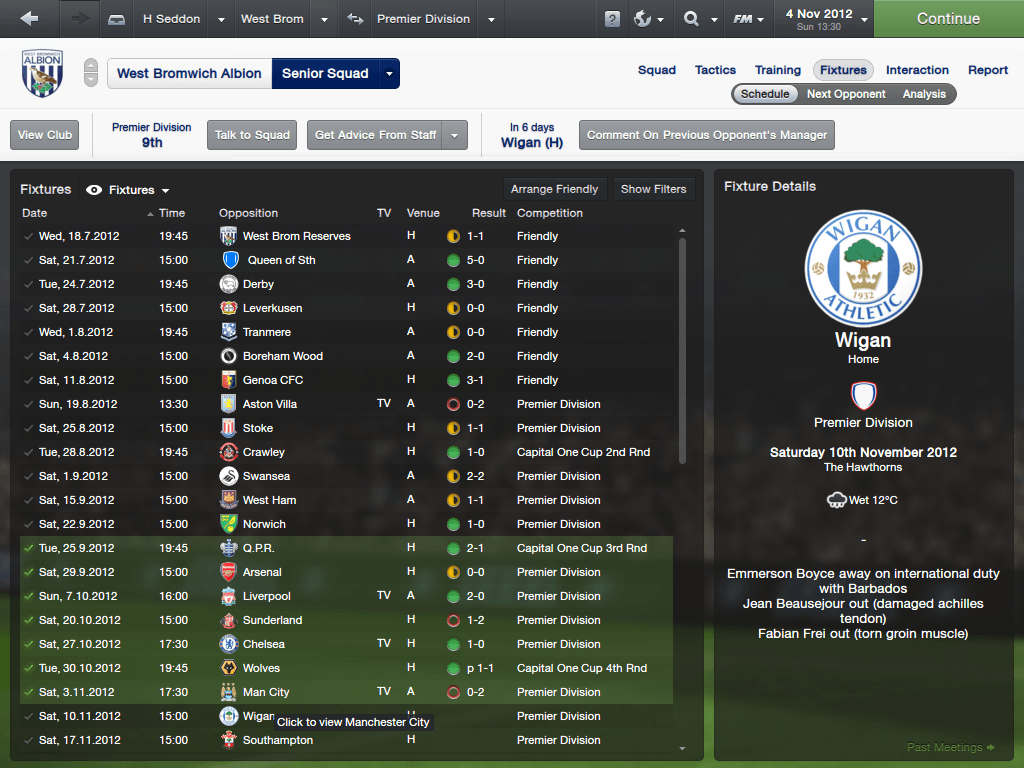 As you can see these are tricky fixtures with two unbelievably lucky results against Liverpool and Chelsea.
See you guys in five more games.
Login to Quote

Jer
7 years
Loses to Sunderland. Beats Chelsea. FM Logic ;). Anyway, you do need someone who sccores the goals for you :P.
Login to Quote

sedsosedso
7 years
Yeah i know, i have £3 million for January, any recommendations.
Login to Quote

sedsosedso
7 years
Hi guys. Today we are going to start with the fixtures. 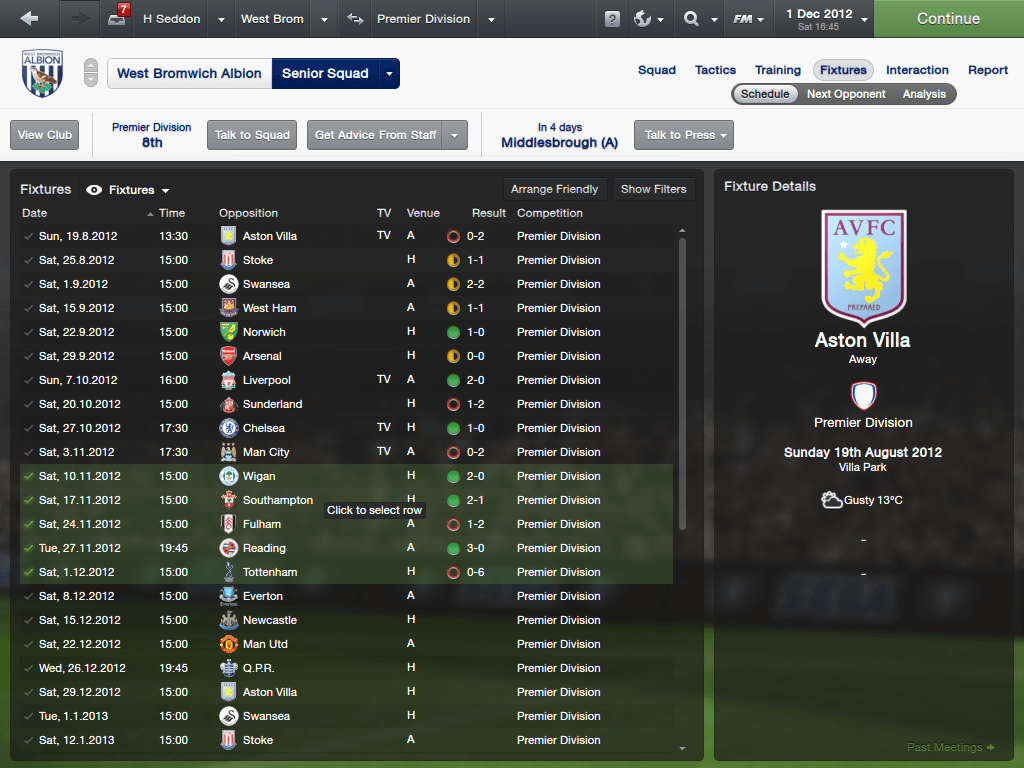 We won three games and lost two but were expected. the 6-0 defeat to Spurs was humiliating and disgraceful. No players played well and we haven't got the best fixtures coming up.
So after fifteen games here is the table. 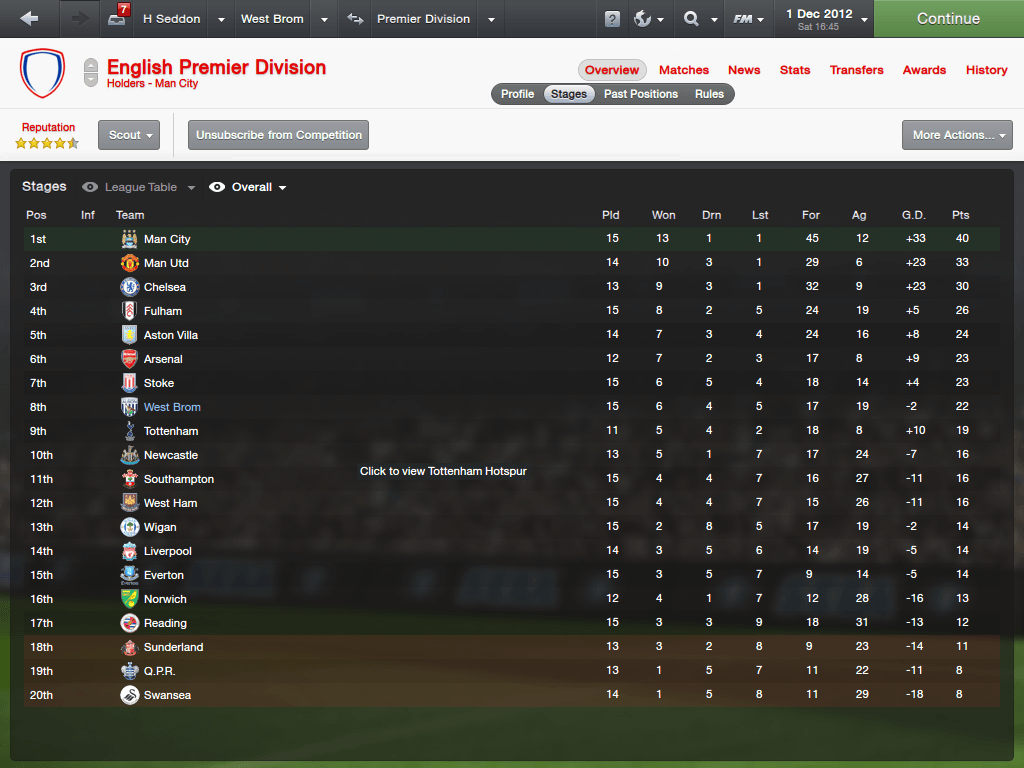 We have moved up one place from last time but Spurs have four games in hand.
Before i go a quick question would you like me to o into detail with the games.
See you in five games guys.
Login to Quote

sedsosedso
7 years
Hi guys i have reachedJanuary and have some more money to spend. i have £4.5 million to spend on transfers what are your recommendations? My most needed positions are Goalkeeper and defenders
Login to Quote

patrick1
7 years
bit of a risk but see if you can get butland or if hes too much craig gordon if he is still available on a free. defenders found some ajax player called Denswill who looks a talent and is very cheap
Login to Quote

You are reading "New beginings".