crisrko
7 years
Most of the older members remember that I always fancied stories with Steaua Bucharest, both of FM12, and one on FM13, that I stopped making, due to lack of motivation.

In this story, I continue from the last FM13 story, but we're already in 2016, at the start of the 2016-2017 season. What do I aim with this story? I aim to reach high performances in the champions league, having previously reached quarters, but lost to Arsenal.

What is my policy? My policy is to develop younger players, get ahold of good players via free transfers and certain players from Romanian teams, for a sum of money, and then sell for profit. In only four seasons, I managed to stack up a balance of 50m $, while still buying players and having great results.

What did I achieve? I achieved winning the RFL four times consecutively, but almost failed to do so this season, due to a huge dip in form due to the Arsenal defeat, where we have been decimated in the England fixture. Even so, we drew 34 games and 71 pts with CFR Cluj, and the fate of the RFL was decided in a final match. We drew 2-2, but we managed to win on penalties, due to Tatarusanu's impeccable performance, and Rosu maintaining his composure. We have also secured the R.Super Cup three times in a row, and the Romanian Cup in 2014, 2015, 2016.
European Cups weren't so succesful for us although, the best we managed in the ECL was the quarter finals versus Arsenal, and in the Europa League ( first season ) we reached Quarters, but were outpowered by Marseille.
Some massive highlights in my quest were being offered a job by Getafe and Newcastle, aswell as seeing Dinamo relegate two times. Chiajna has been taken over by a Peruan tycoon, and I seen three of my players leaving for 5mil to them, aswell as loaning them a striker.

crisrko
7 years • Edited
There are the stand-out regens. I can put up some more regens if desired. 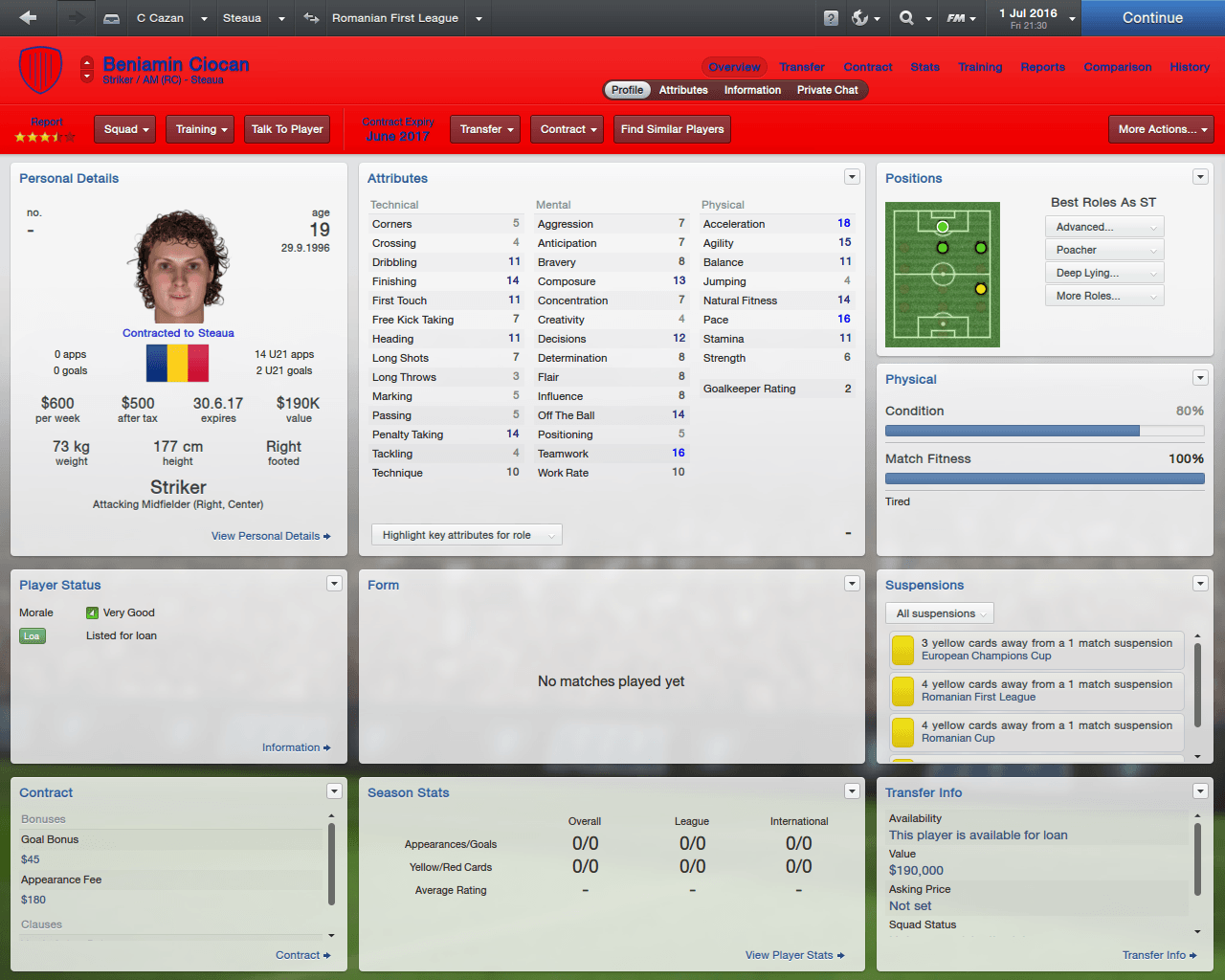 Benjamin Ciocan arrived to my club, if I recall correctly, from a league two side. I didn't give Ciocan his change in the Steaua jersey yet, because I have Beciraj, Tim Walther and many others. Its a very tough fight on the striker spots at Steaua. I plan to loan him out this season too, and next season make him a starter. ( He might get it this season too, depending if Beciraj continues last year's form ) Very pacy, young, fabulous. 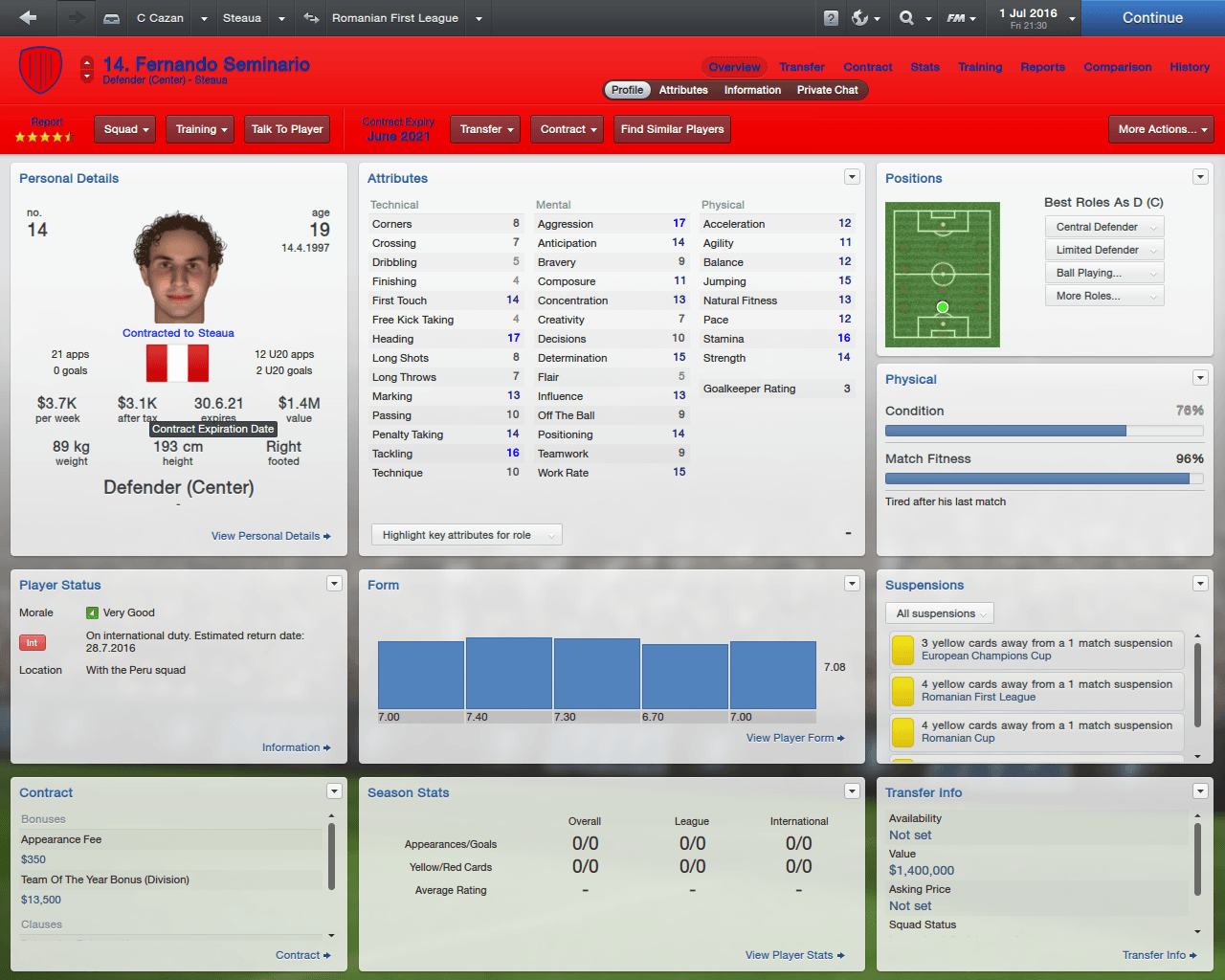 Seminario is straight out of Peru. Joined us last season, and had pretty decent performances. Steaua had one of the best defences, conceding like 20 goals. 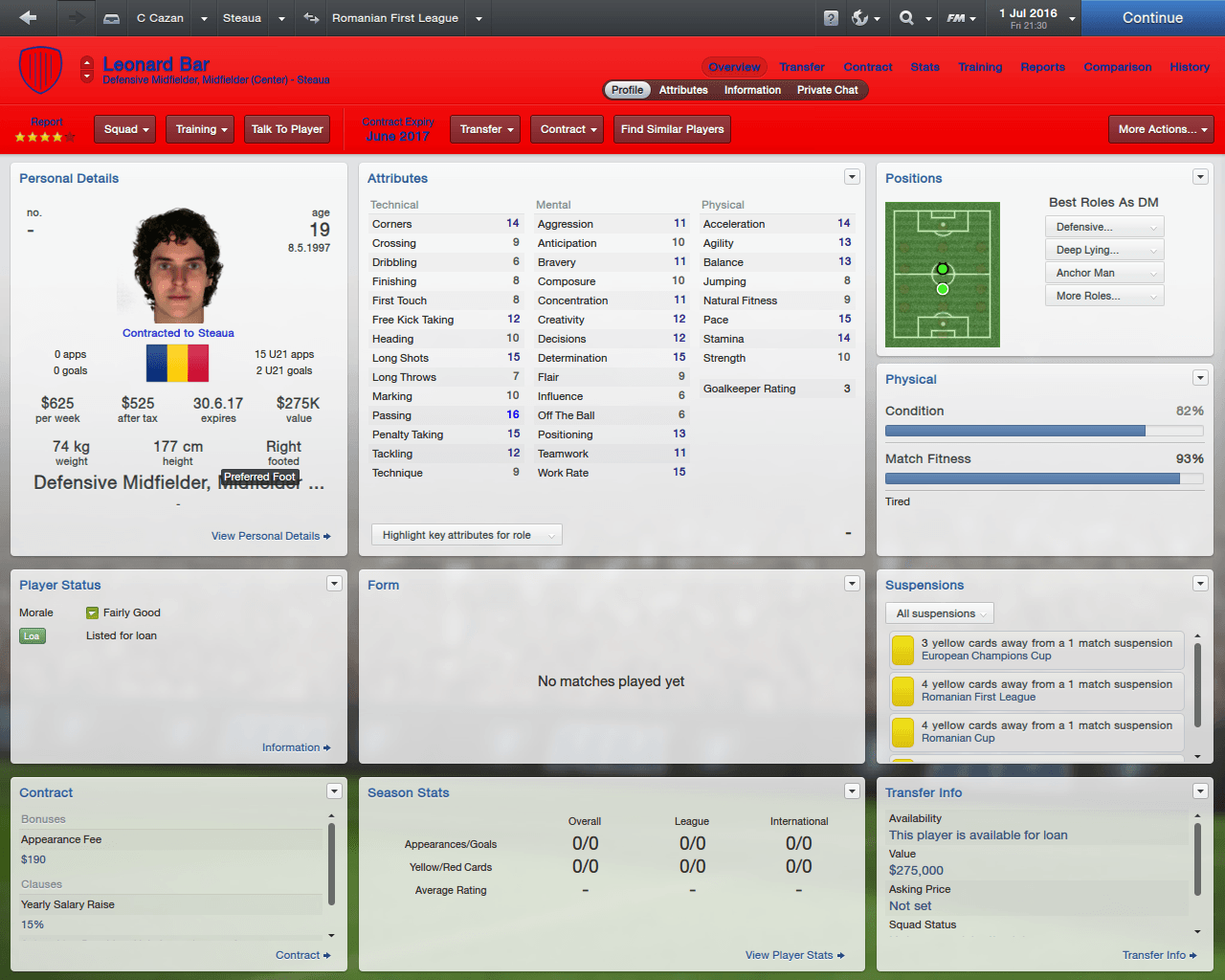 Bar.. I love this boy. First season I got him, he went straight into the starters, and didn't disappoint. Next season though, I decided to loan him out to Astra, where he performed incredibly. I'm planning to leave him in the first squad this season, but I'm unsure 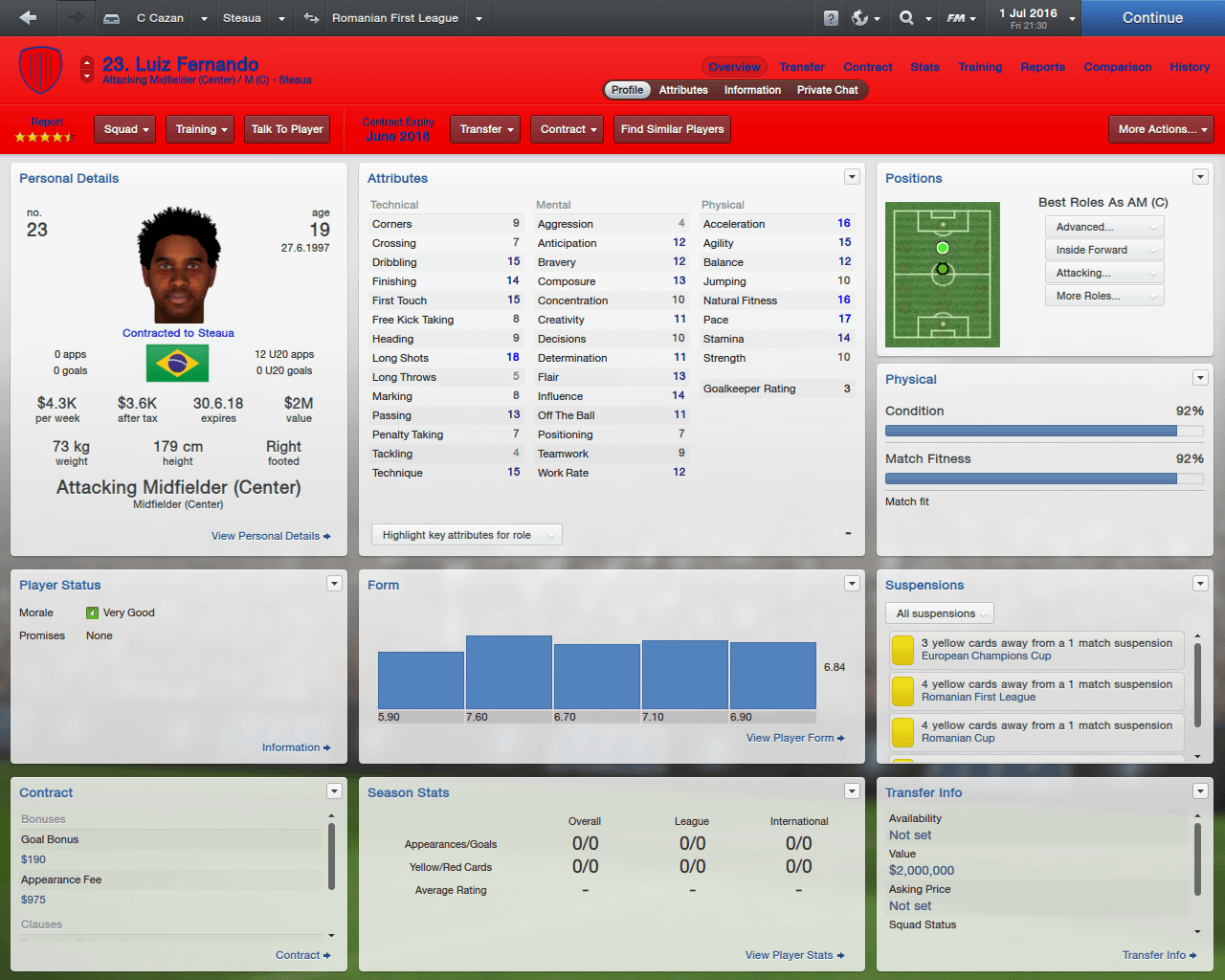 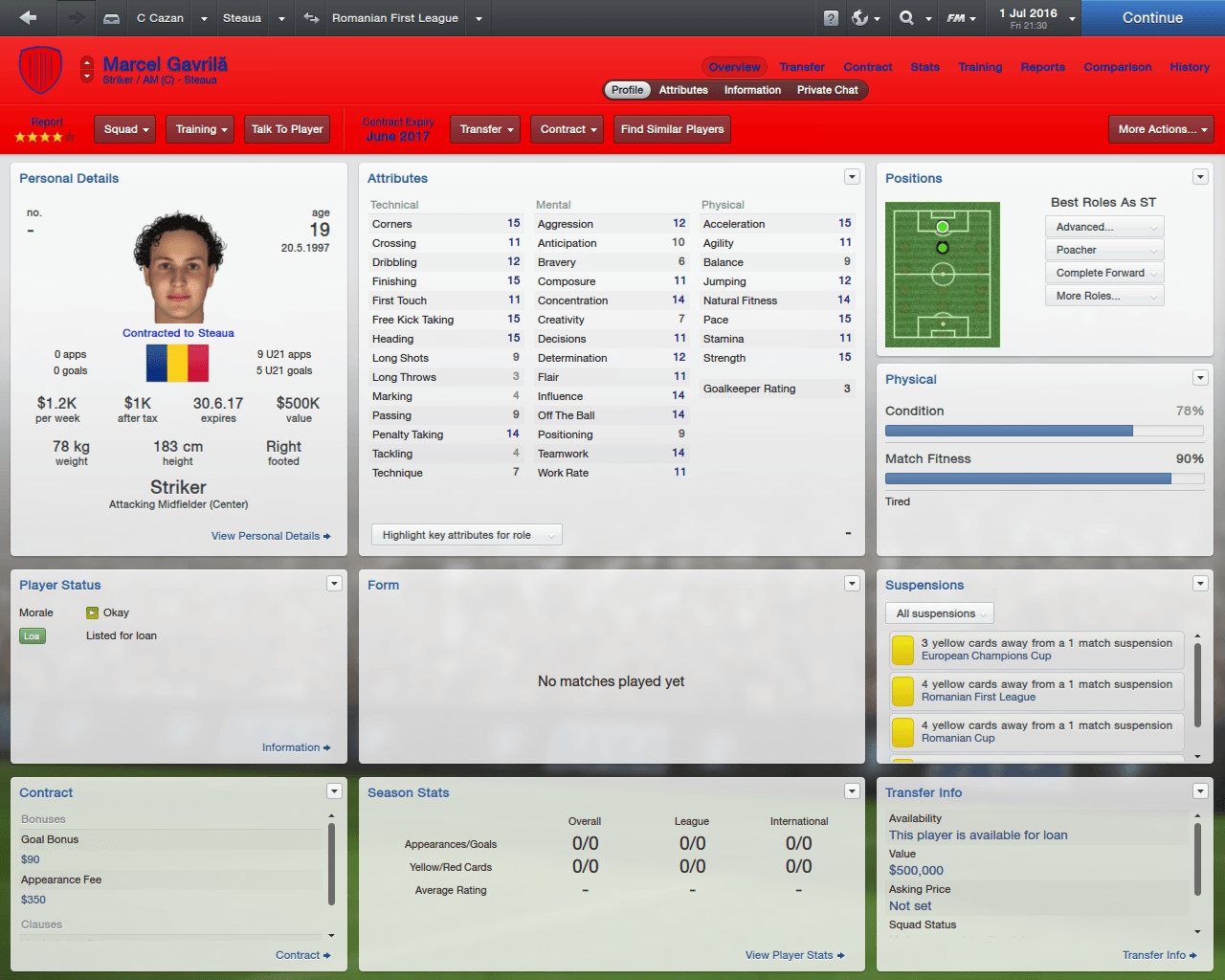 Another future star. Bangs goals on a regural, but its difficult for me to decide. 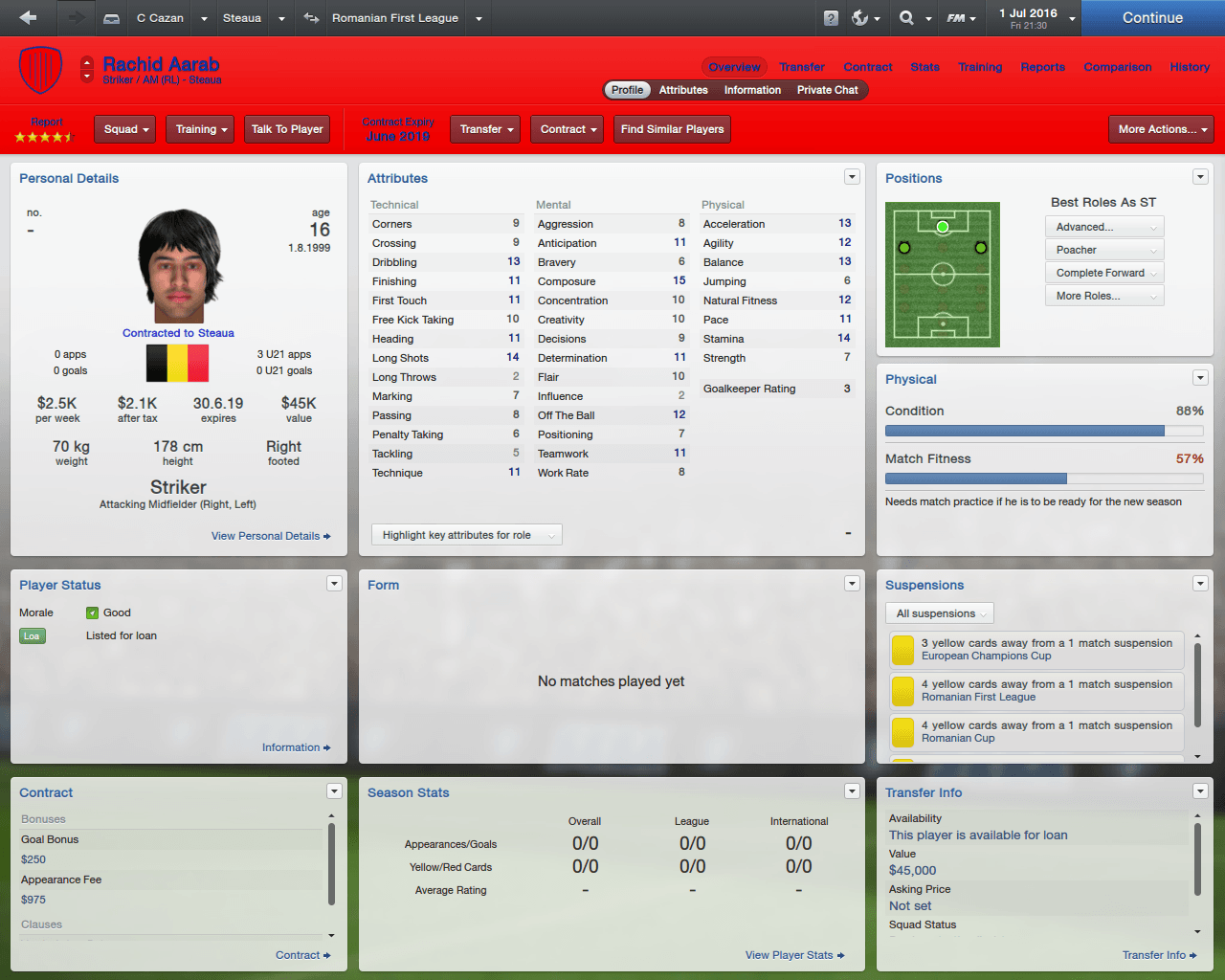 We'll see how he does. Still really young. 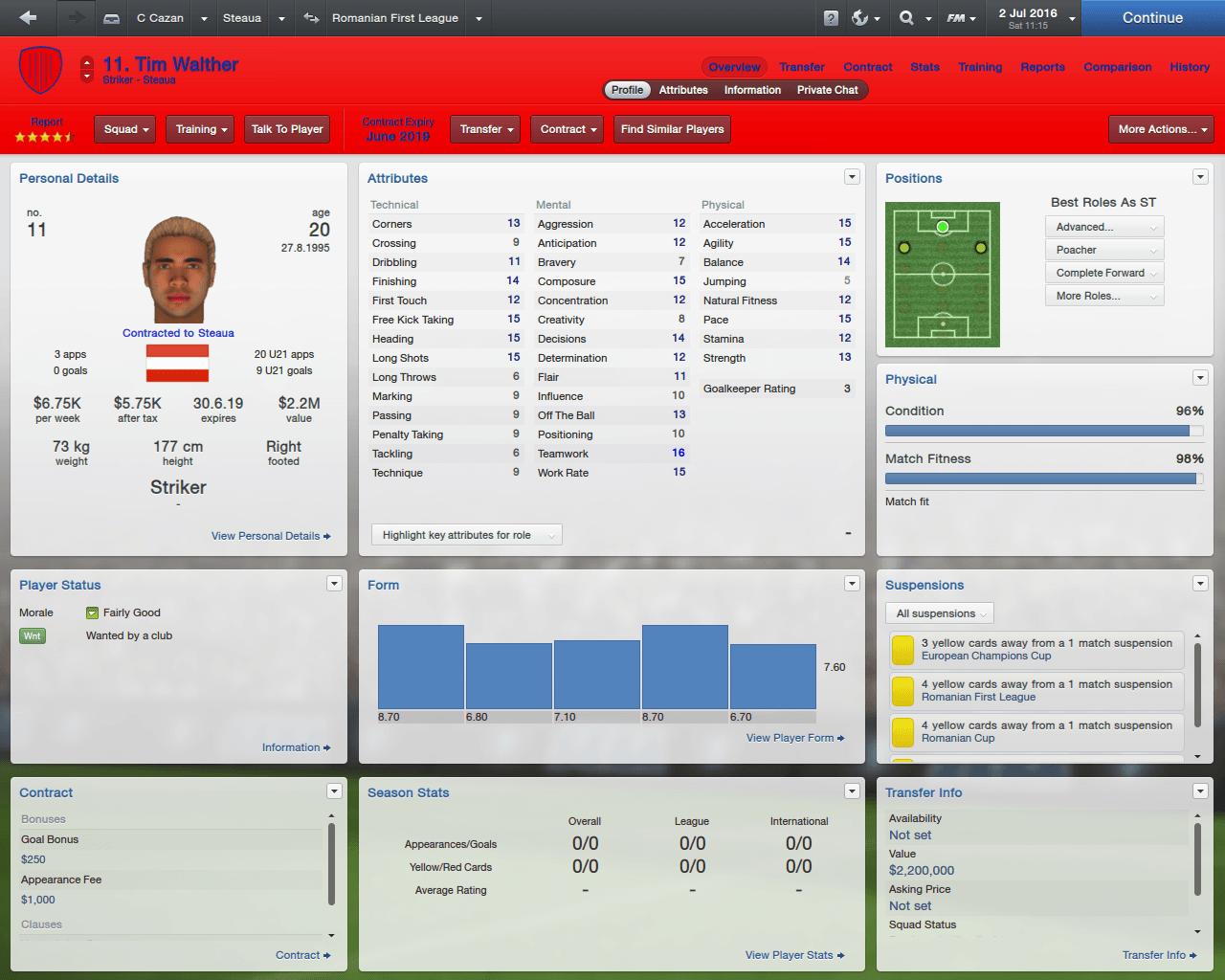 We all know Walther from my other story. A great player 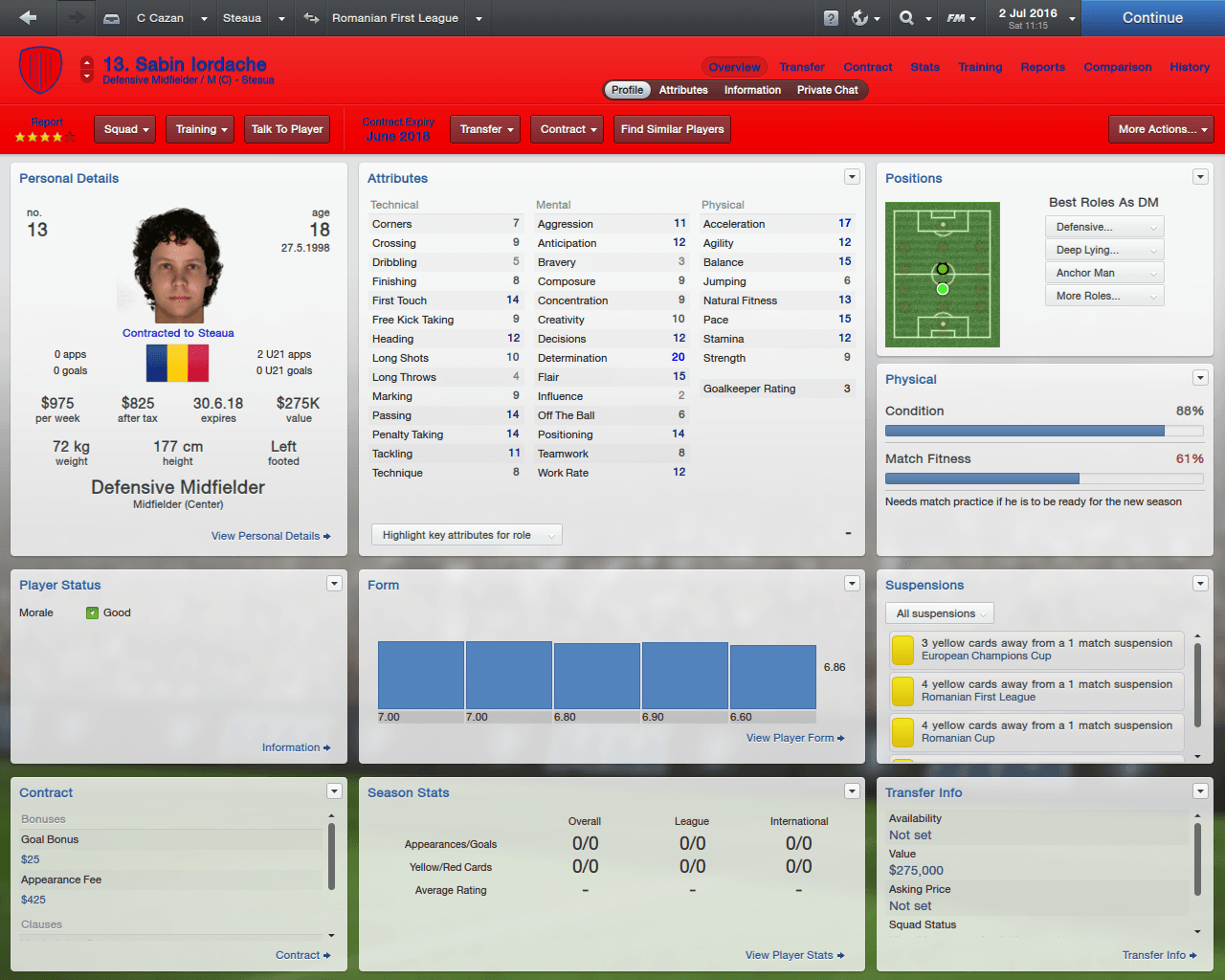 I just keep finding them! Another great regen that had twelve matches his first season, with an avg of 7.26
Login to Quote 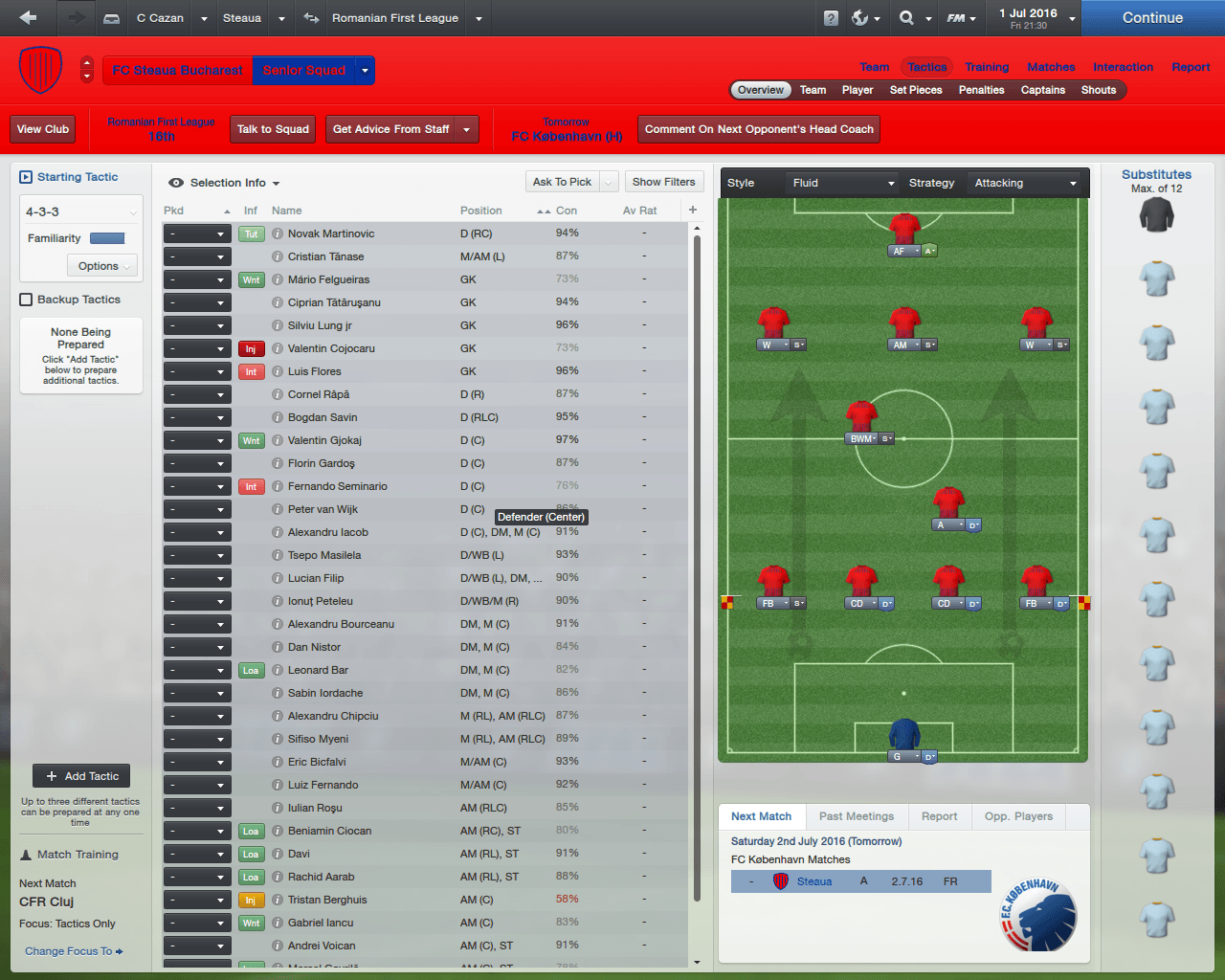 I'm using the same old formation, but it varies in the midfield department. Sometimes I use a CM and a DM, sometimes two CM's, sometimes two DMs. In the worst scenarios, I pull my AM's into three AMC's. Its a very versatile tactic. 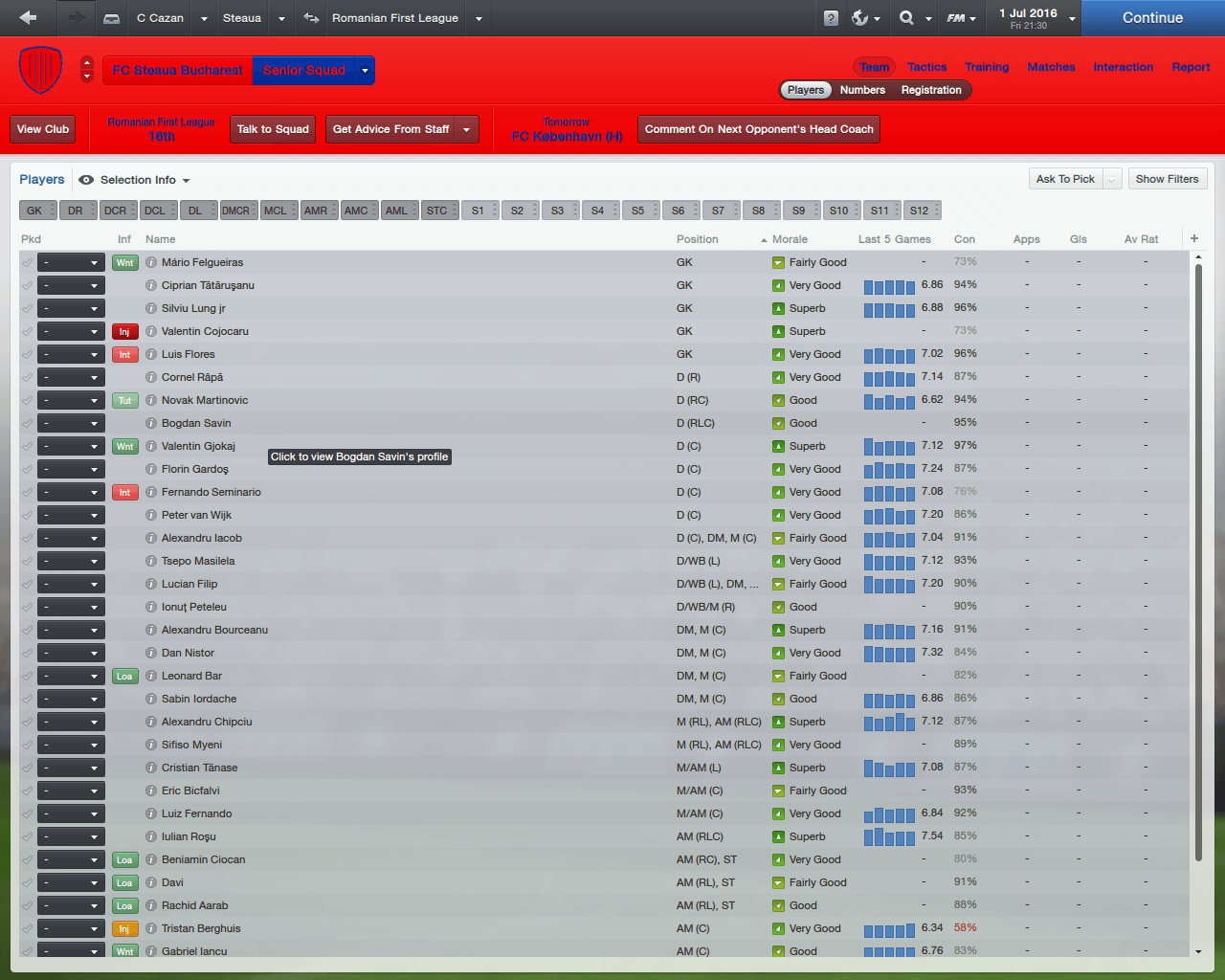 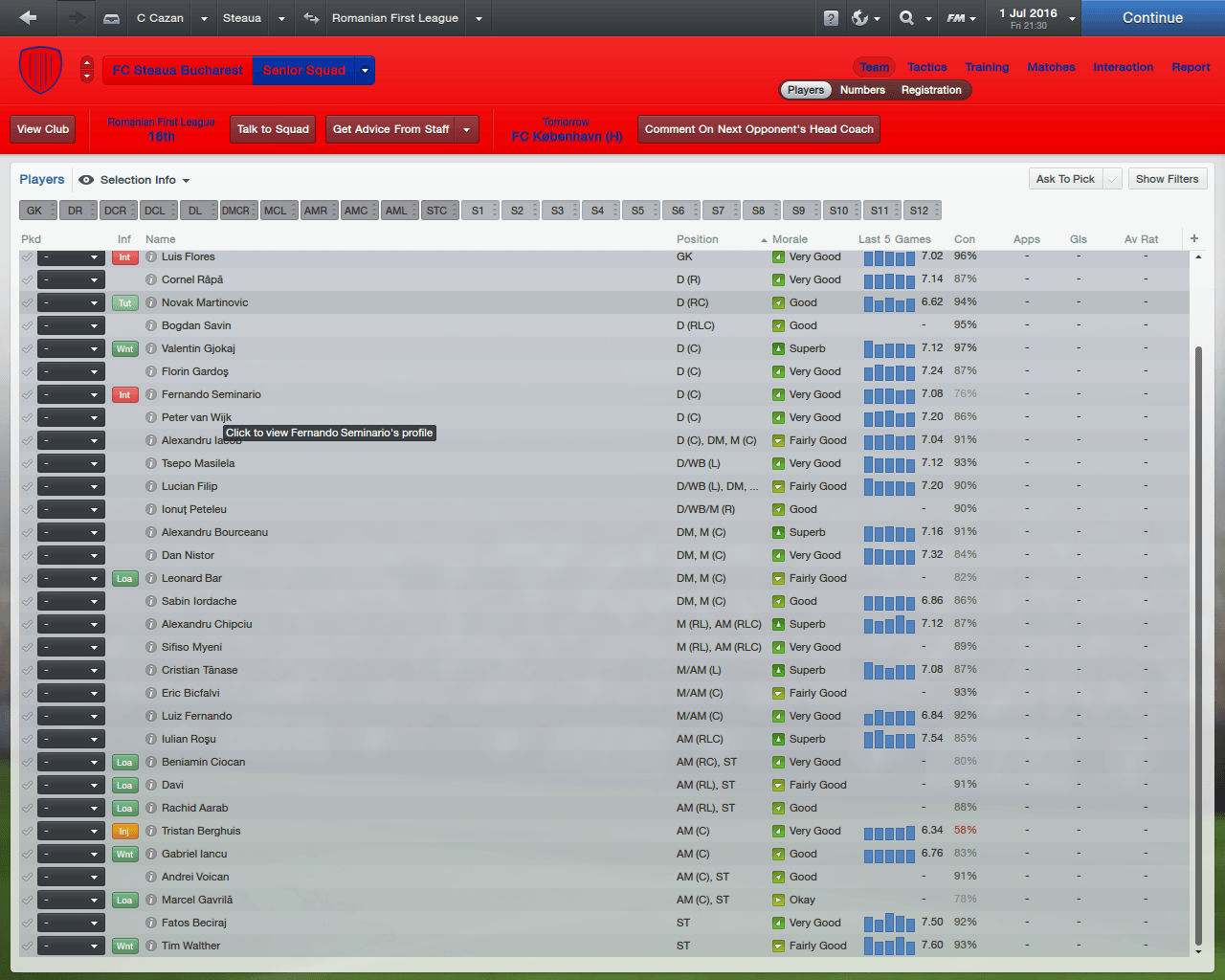 I'm looking to get rid of Felgueiras, Van Wijk and loan Ciocan, Gavrila, Bar and maybe Iordache.
Login to Quote

TheNorthman
7 years
Nice start, would be good to see the regens develop and also how far you can take the club, i will keep watching
Login to Quote

crisrko
7 years
Steaua unveil new nike kits. Mihai Nesu Foundation is the front of the kit. We're by your side man! 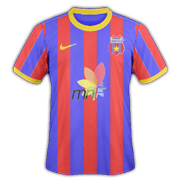 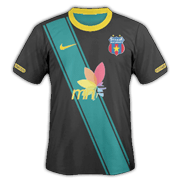 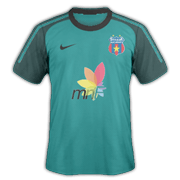 crisrko
7 years
July update
July was a fairly easy month, as we had four official matches. First match came against CFR Cluj, for the Romanian Supercup, where, Steaua, as always, didn't fail to impress. With a goal from Luiz Fernando, they clawed the RSC for the fourth time in a row.

Manager of the month: Cristian Cazan - Steaua
Login to Quote

crisrko
7 years
August update
Ah, what a month. We only had three games to play, and we already saw Harry Maguire joining the team, with Gavrila, Bar and Ciocan leaving on loans. As Steaua secured a feeder-parent club relationship with Viitorul Constanta, Gavrila and Aarab will play the rest of the season in the V.C shirt.

Sportul 1 - Steaua 4
Goals: Marian Vasii | Cristian Tanase - Tim Walther x2 - Alexandru Iacob
Easy match which we dominated. I'm glad that my regen Tim Walther always keeps his scoring up, as the fight for the first place is tense. Both him, Beciraj and even Andrei Voican are scoring, so this will be interesting to see how it goes.

Also, the groups in the ECL have been drawn. We got a pretty difficult group, but its the easiest group out of them all. 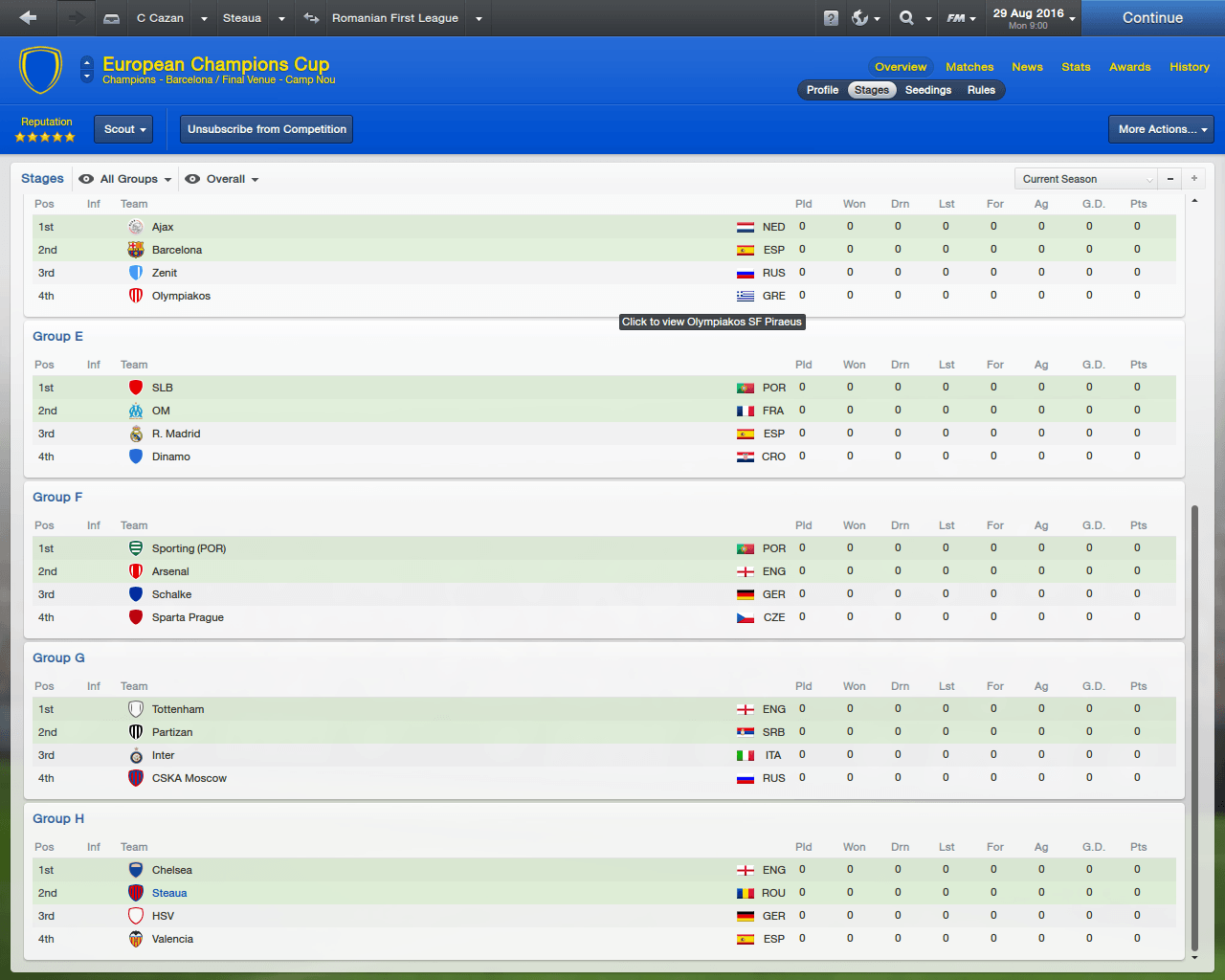 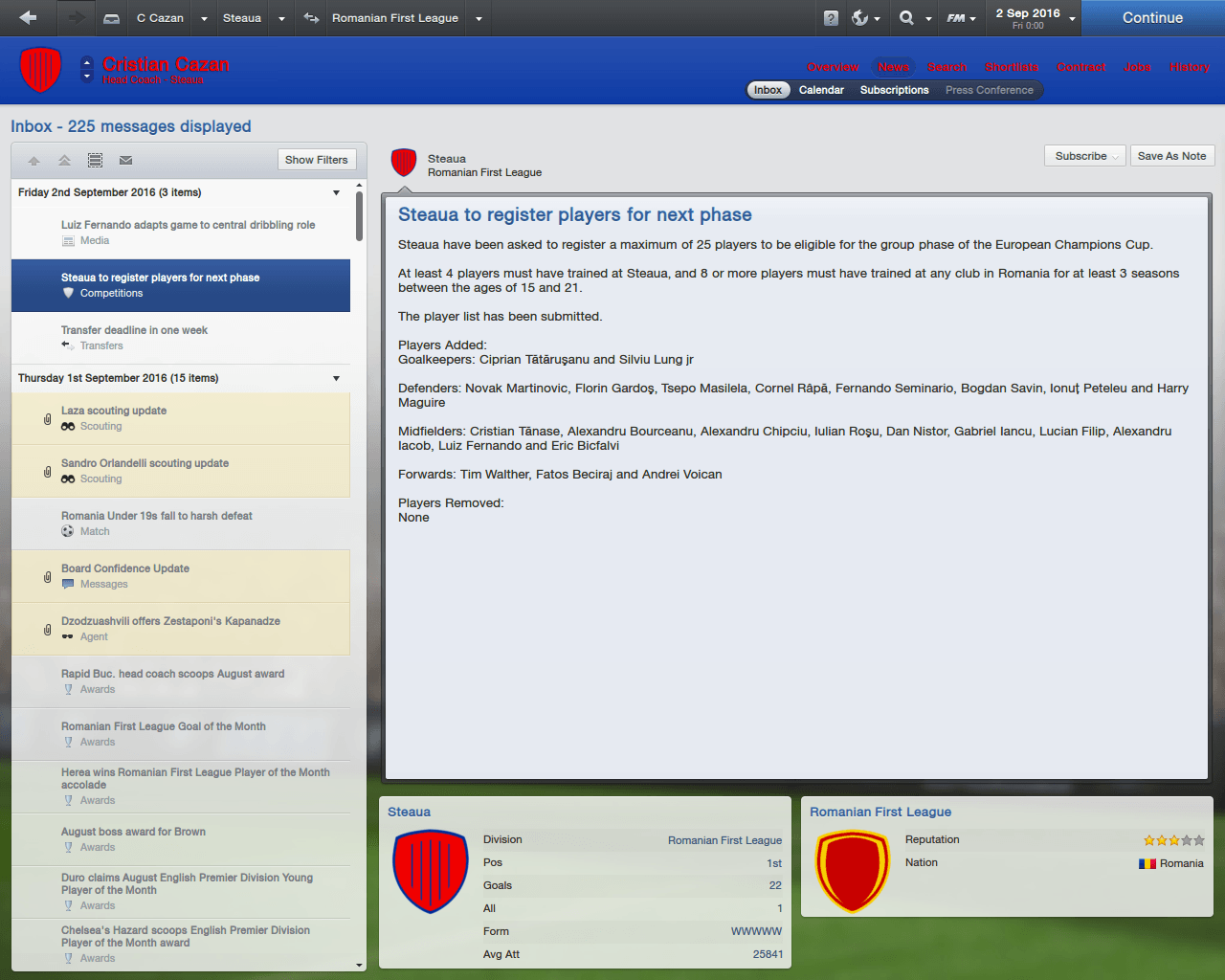 Blue
7 years
Tough group Cris, but you stand a chance

What he said.
Login to Quote

You can see that we had a really good month, except the match against Valencia. Their DC's outpowered us, and managed to score two headers. Otherwise, I can say Voican and Walther are on a roll, and I'm pleased to see that my striking force and midfield are so productive.
Login to Quote

As you can see, our form varied heavily this month. We started pretty bad, then got our form back, but I still don't get it how we managed to draw with UTA. Its just.. bah

Also, we are due to receive two new players in February, two young prospects with bright, bright futures.
Gorea 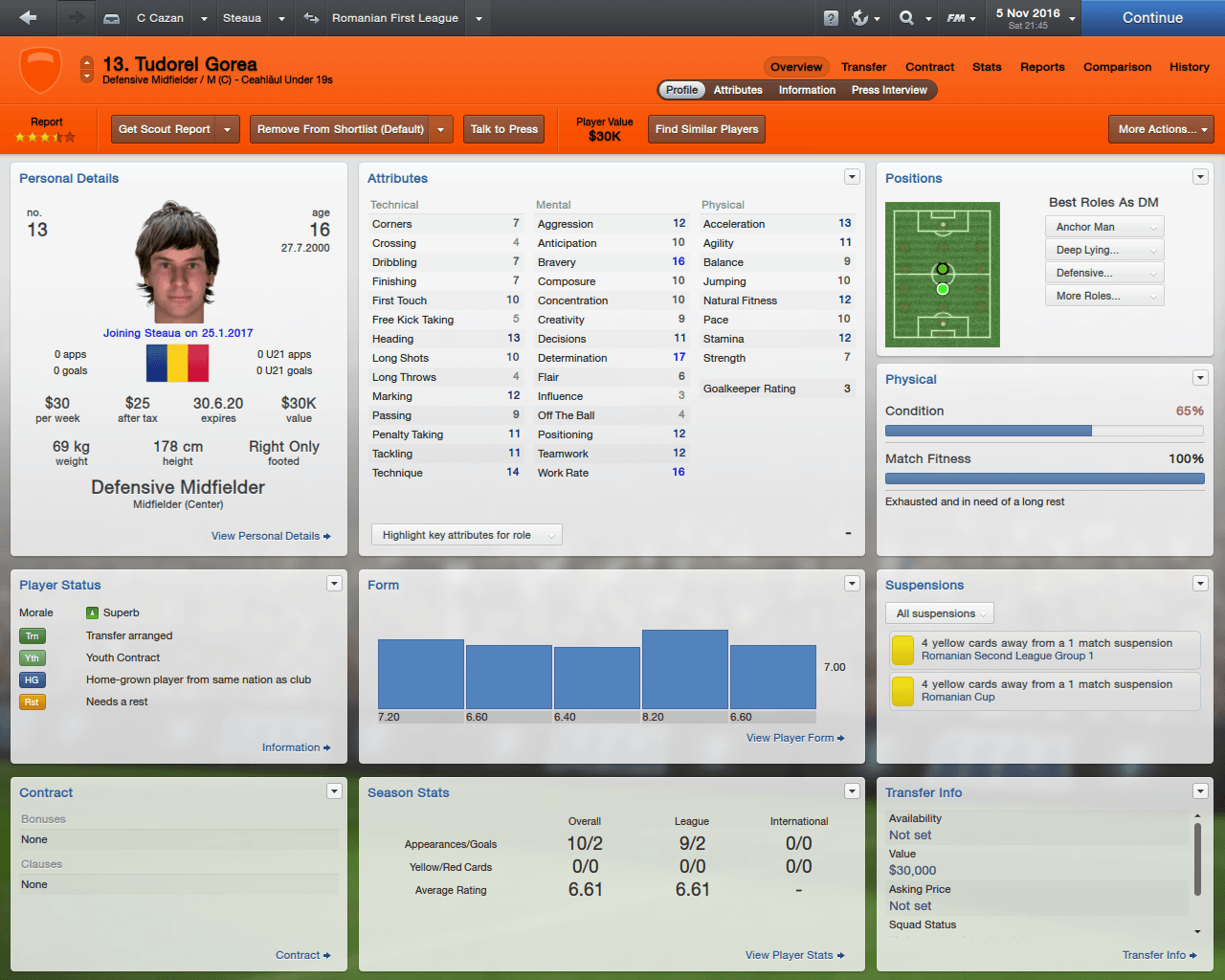 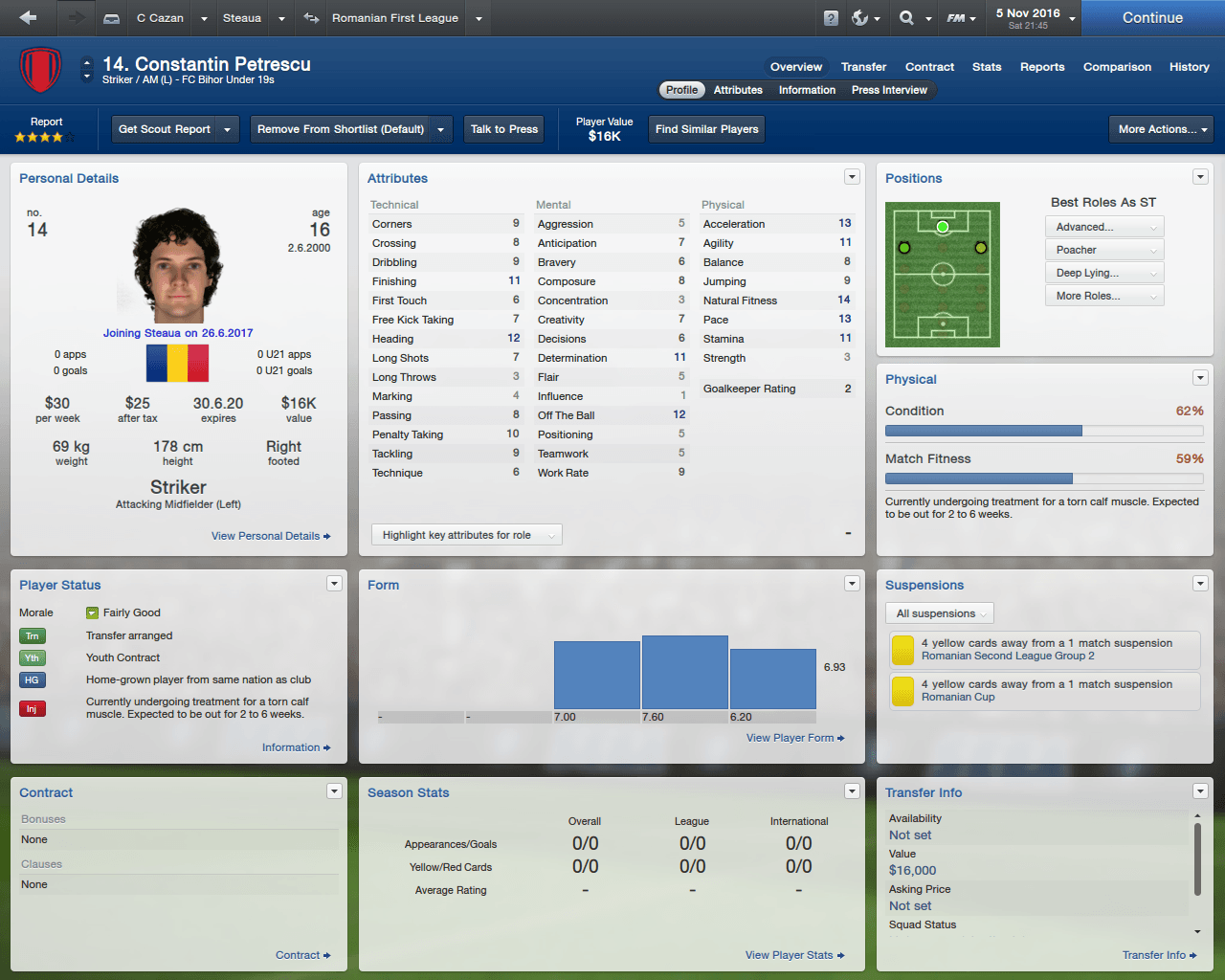 is due to join for 250.000$. Both of them are young, and both of them are from my favourite regen shops, Ceahlaul and FC Bihor.
My players are performing well, especially Seminario, Walther, Voican, Chipciu and Bicfalvi. My and Chipciu's relationships broke down as he wanted a transfer, for us failing to win the Europa League, as I promised him (soz man, I can't go from ECL to EL just to fulfill your promised). So well, I demanded 4.5 mil for him, and for now, no buyers. We shall see!
Login to Quote

You are reading "The Romanian project".