Blue
7 years
Not the best month you've had, but you can still catch Schalke

End Of Season Run In 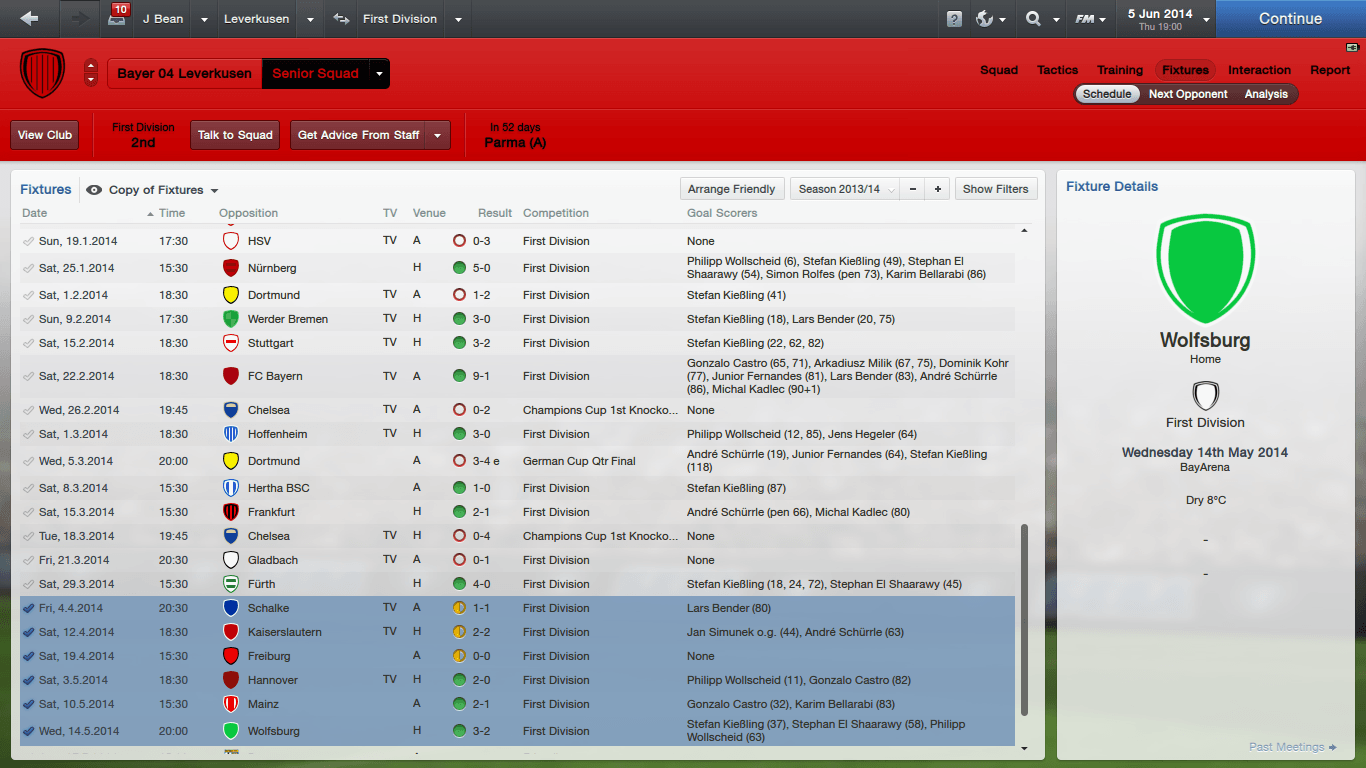 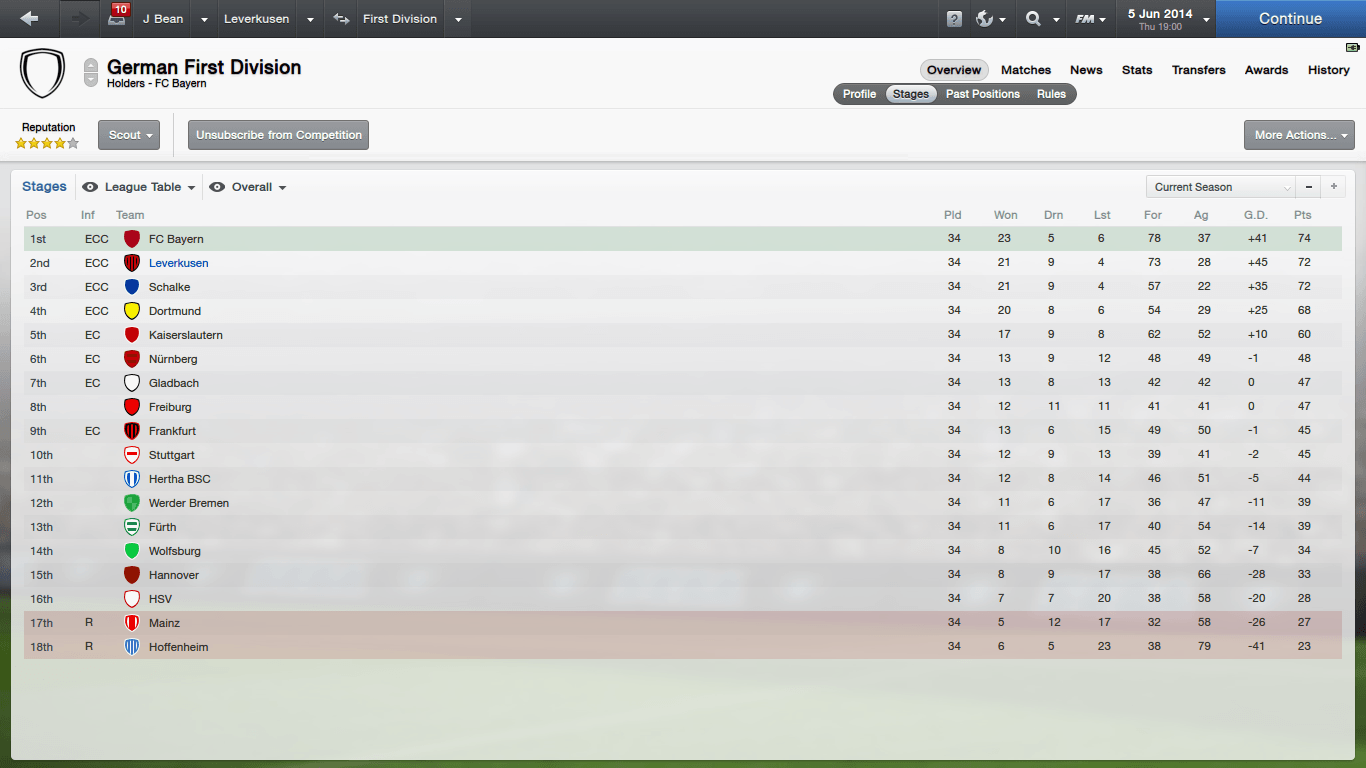 
Leverkusen and City fans will wake up in a state a shock when they see this mornings breaking news. Manchester City have confirmed that they have approached Joshua Bean to be their next manager. Bean joined Leverkusen in June of 2012, and in his first year won the league and the German Cup, however in his second season Leverkusen did not win a single trophy despite Bean's best efforts.


Rumours are City have offered Bean a 5 year contract on £110,000 p/w and has given him £71M transfer budget to spend on whoever he wishes the only rule is to sign big name players. Bean is supposedly considering his future and it is unsure whether he will accept City's offer or not, only time will tell.

Hi guys any comments/views on what you think I should is welcome :)
Login to Quote

bonsaijr
7 years
Don't Go Dude, City suck! plus its no fun with loads of cash!
Login to Quote

Arvind
7 years
Stay. Going to City will ruin the story.
Login to Quote

Bean Rejects City For The Future Of Leverkusen


Bad news for City as their search for a new manager goes on, the breaking news this hour is that Joshua Bean has rejected City. A statement from Bean goes as follows, " I am honoured to be offered a job of such high presteige but I do not want any other job than my current one. If you look at the players we have already brang in we can win our title back. We have many youngsters coming through the ranks so in several years time we could possibly have a Champions League Elite team, and for that reason I am not going to accept the City job. I would rather stay here and build a team than buy success, it has ruined football and I will be part of it. Thank you that is all."

Stinging words spoken by Bean and he will not be a popular figure within the Etihad at this moment of time.
Login to Quote

Blue is going to ban me for this

Stephan El Shaarawy: Bean confirmed the signing of Stephan El Shaarawy for a fee of £10M from AC Milan. A player who had 6goals and 7assists last season Bean was desperate to re-sign him, and had little difficulty. 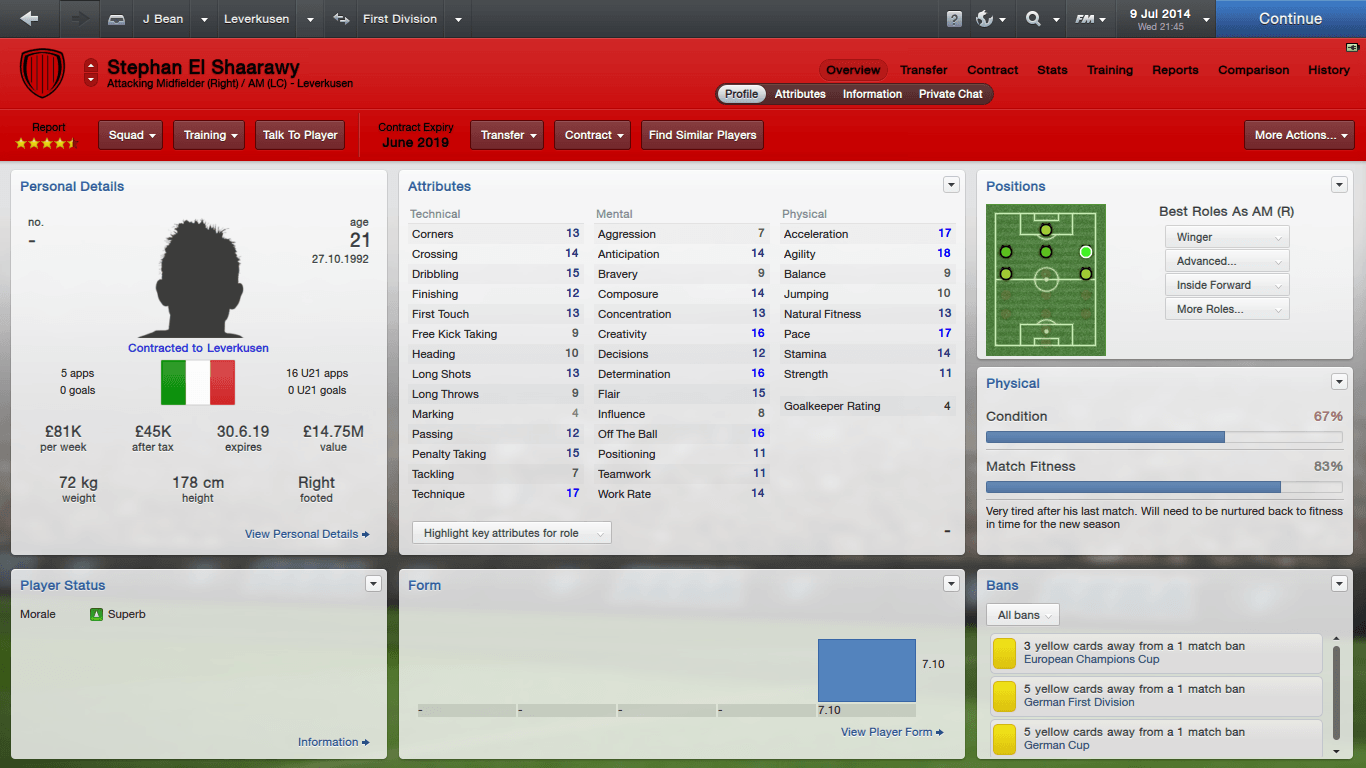 Marcelo Henrique:A youngster that has the PA to become one of the best AMC in the world and Leverkusen weill be delighted that they were able to sign him. 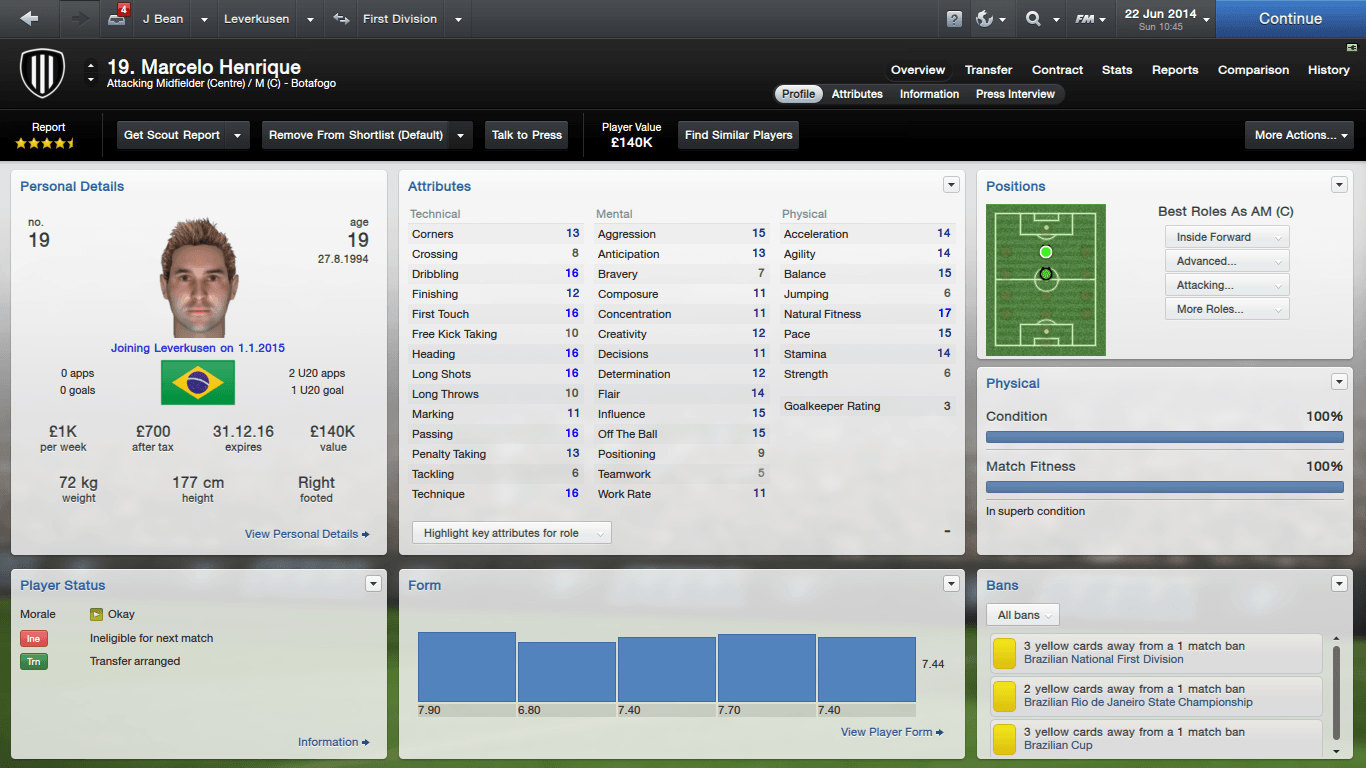 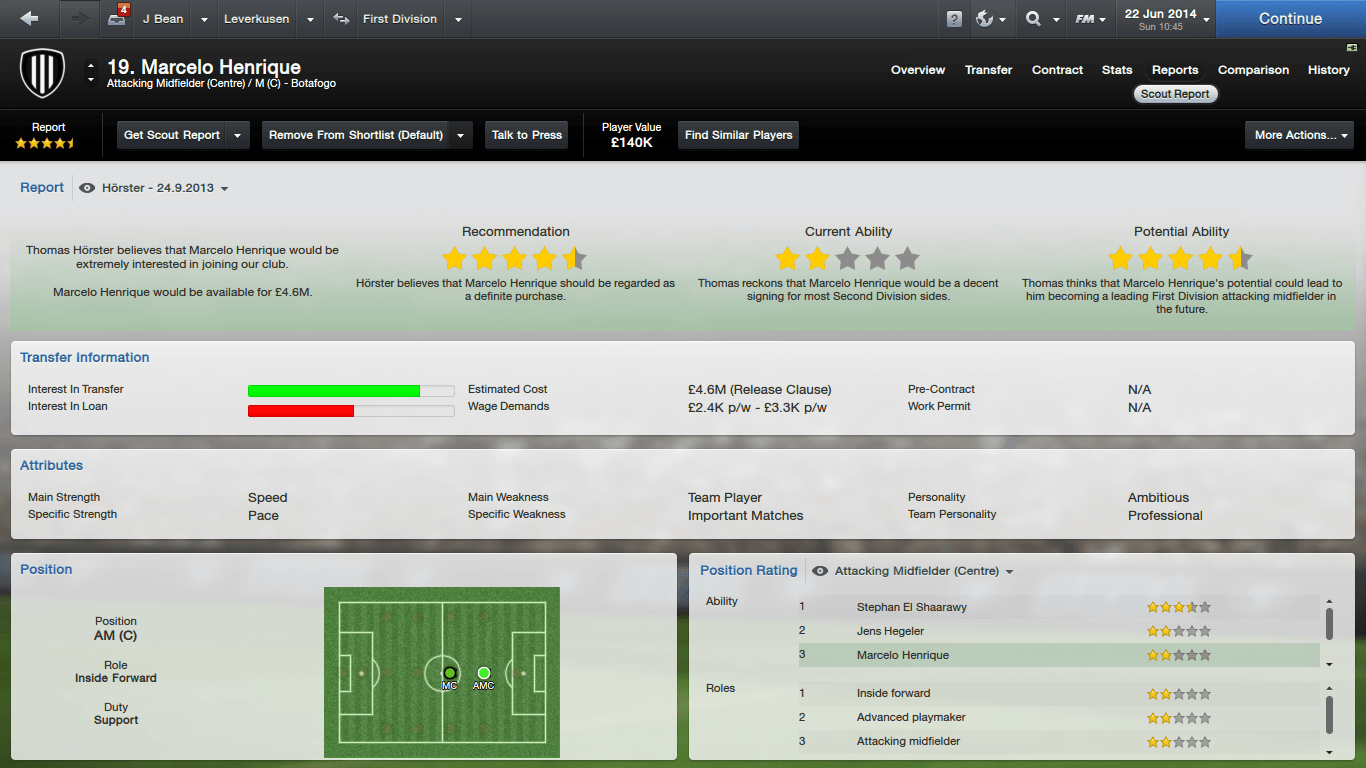 Marcos Ramos: Another youngster that plays in midfield shows that Bean is looking to the future, yet another player with the PA to become a world beater. 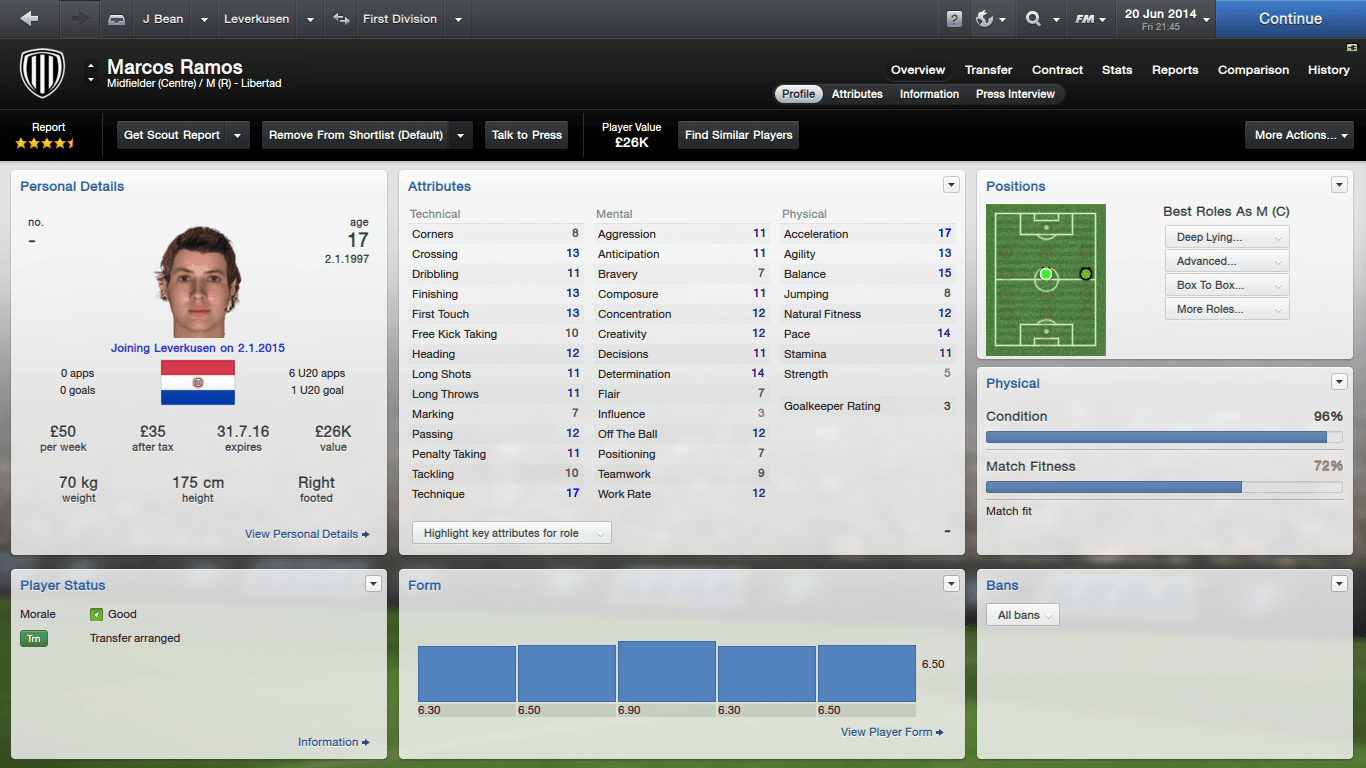 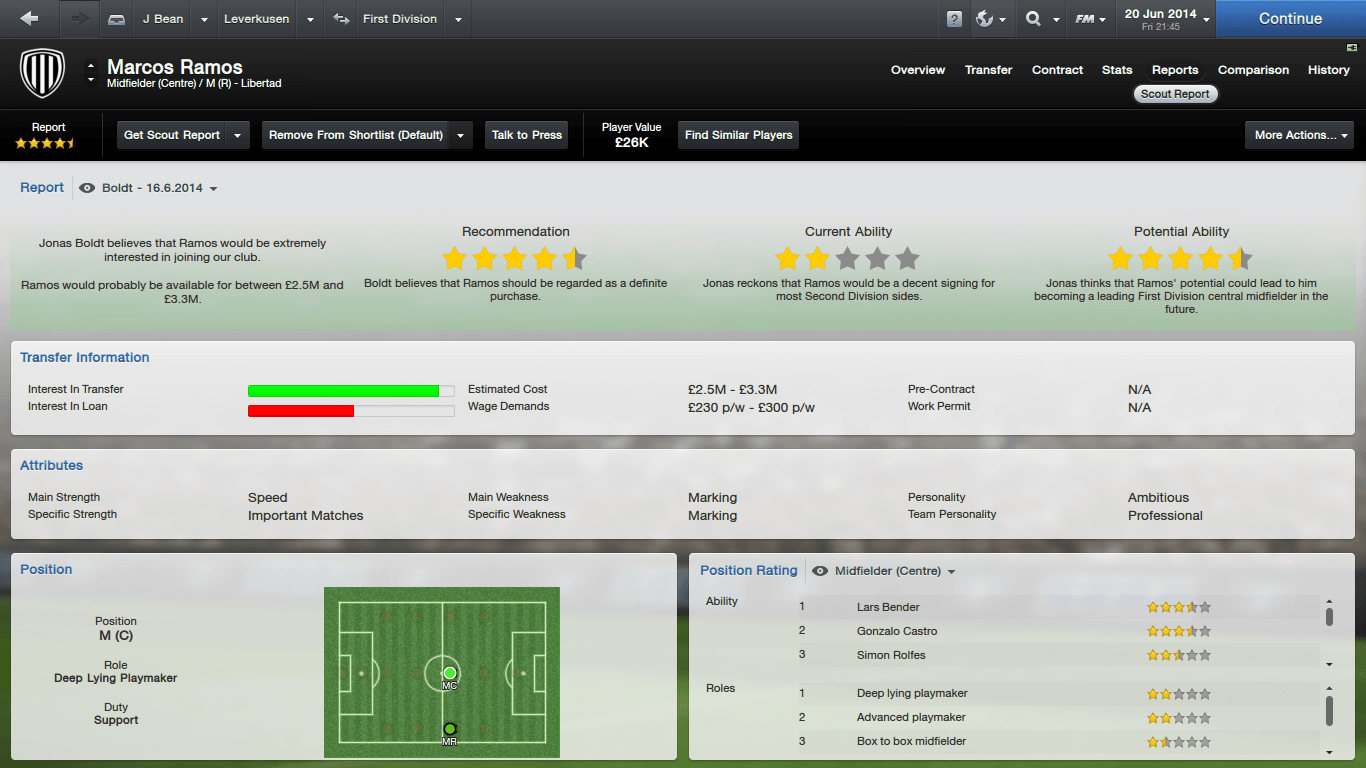 Gianluca Marzulla: A player that was no where near good enough to compeate for the starting striker spot as Leverkusen tend to only play with one striker. However to the suprise of many AC Milan brought him for £2.5M.

Simon Rofles: A departure that reportedly brang a tear to the eyes of Joshua Bean's eyes as his favourite Leverkusen player was taken away from him by big money spenders Manchester City. Rofles was Leverkusnes main man for the league winning season as he held the line just infront of the defense to allow the attacker push forwards. However Bean will be happy he got a record £35M for him, but many will feel it would of been better to keep him.
Login to Quote

RandydeB
7 years
lovely regens you got there mr beany

Neal
7 years
Good signings. Rolfes will be a big miss, hope you can replace him with all that money.
Login to Quote

let's hope they end up as the future stars of football

I currently have around 5 in my youth team with 4* PA or more so future looks good!
Login to Quote


Will be a very big loss

You are reading "Bayer Leverkusen: Knocking Dortmund And Munich Of Their Perch".