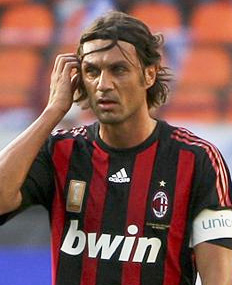 Danilo Pretelli has finally given the San Marino Calcio fans something to cheer for. Paolo Maldini is currently is currently in extended talks with the club over taking over the vacant managerial position.

Paolo Maldini has officially joined San Marino Calcio on an 11 month contract on £2,000 p/w. Maldini is rumoured to be very happy with the chance he has been given to manage at a respectable club with a project, in sight. Maldini has requested to have a press conference later today so he can answer any questions from a packed press room.

Maldini brings a large amount of experience to Calcio having been a new set of managers that have won more than the team he manages in their entire history. Maldini enjoyed success at both domestic and international level. It is an exciting to be a Calcio fan for the first time in many years.
Login to Quote

Maldini's First Ever Press Conference As A Manager

Hi everyone please take your seats Mr Maldini is here so please ask away.

Hi, is this your dream job?
I would not go as far as to say it is my dream job, but I am very happy to be here and look forward to a long illustrious career.

Will you be hands on or not?
Footballers are at their best if they are treated as people not just footballers.

What is your main competition?
The league is my main concern this year.

What is your tactic of choice?
*Laughs* Well being a defender I like to think I will be able to set up my team to be defensively sound!

What type of players will you be signing?
I am going to sign mainly youngsters but there will be a few older players being brought in hopefully.

Thanks for your time Mr Maldini is finished for today.
Login to Quote

Thought I would change my story style compared to my last story!
Login to Quote


Maldini's first ever day in management was spent judging his players in correlation to the ability of the league, he also then admited to staying up till the early hours of the morning discussing tactics with his assistant management. Maldini the training facilities in the early hours of this morning looking satisfied with how is managerial career is going. 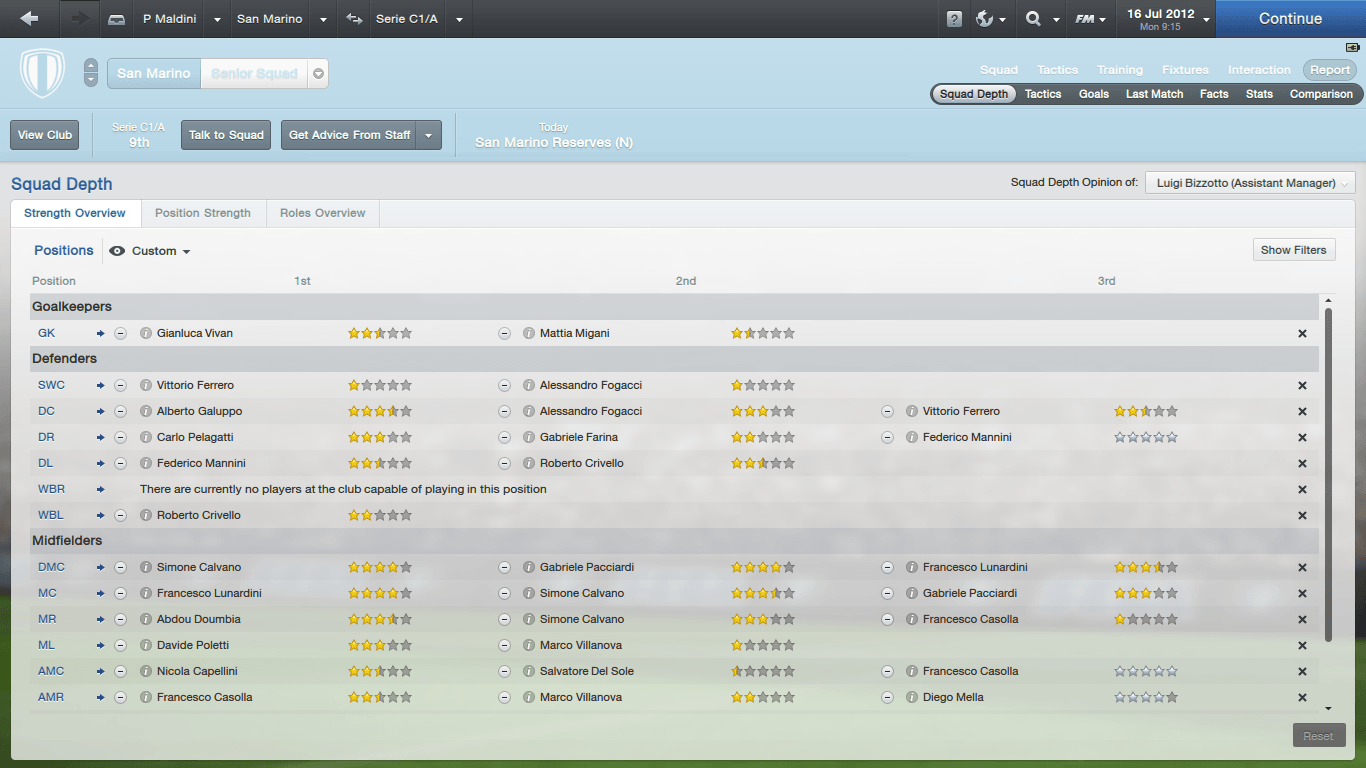 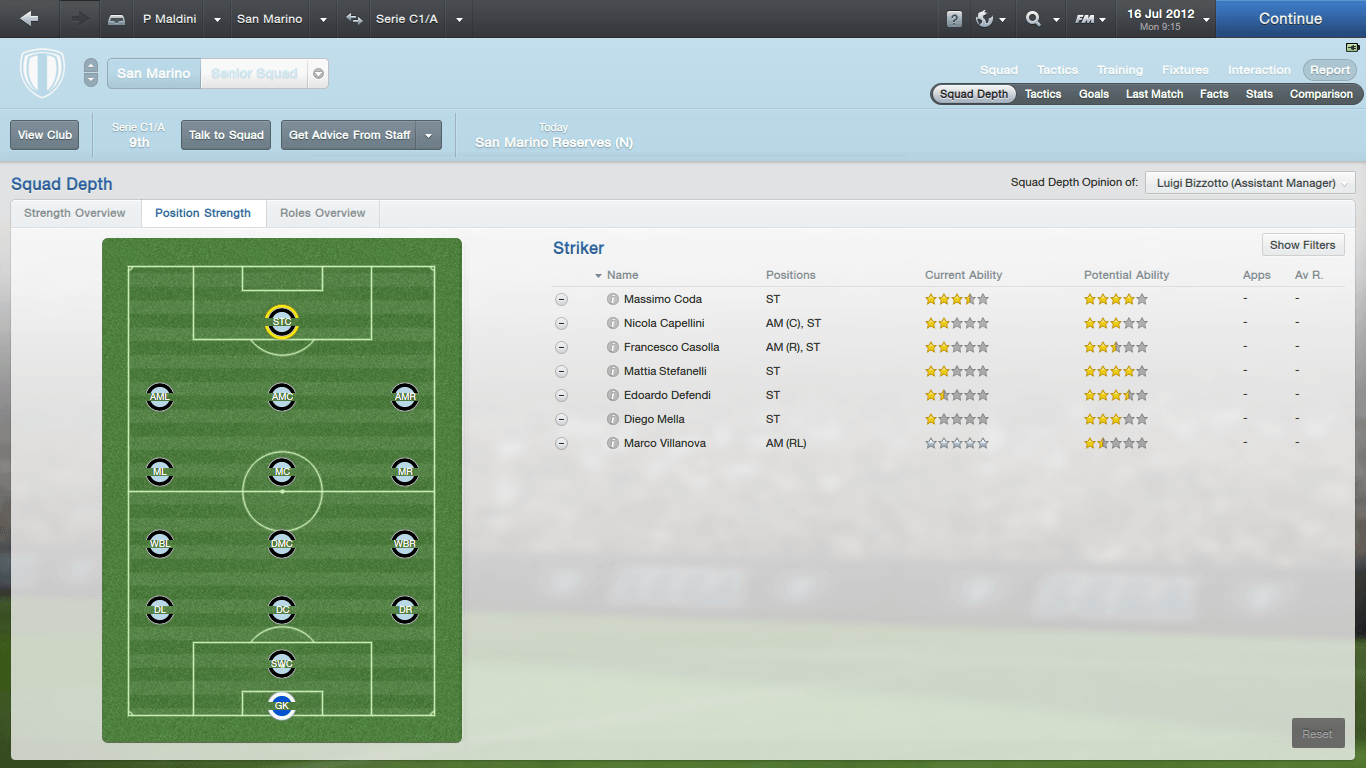 A overview of my team. Maldini is rumoured to be very happy the central defenders and the central midfeilders but now is supposedly looking for wide men in both defense and midfield. Maldini has been given a budget of £43,237 in transfer money and £7,000 left over in wage budget. So Maldini will be looking to strengthen the squad. 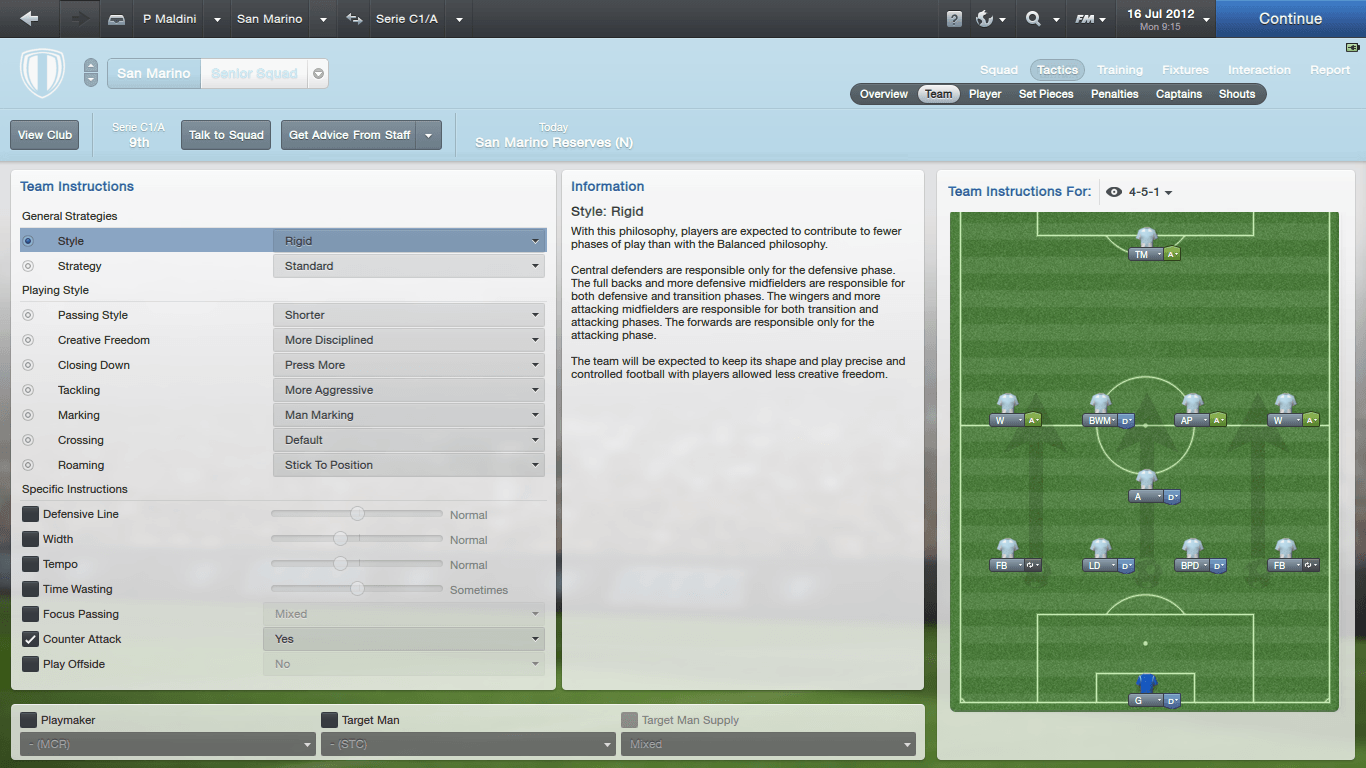 Maldini has decided to be generous and go for a tactic that suits his current team very much by emphasising on a good central core for his teams foundations.
Login to Quote

Blue
7 years
This story is shaping up really nicely Beany, keep it up! This can be even better than your Leverkusen one, and maybe even a contender for Story of the Month

Kane
7 years
I like the twist. A great start, and I agree with Blue, if this carries on it could be a contender! Good luck and keep it up Beany!
Login to Quote

Today Maldini announced the news that he has hired two new scouts to help him develop the team further. Although Maldini was brutally honest and admitted that the scouts were not of a high quality they like him were new to the game and were keen to do all they can for San Marino Calcio. They were quickly put to work by Maldini who has them scouting several players with in an hour of them signing the contract. Things are looking up for San Marino Calcio fans, not only do they have a manager with legendery status but he also seems aware on how to progress a football club and most importantly how to sign good players.
Login to Quote

Louis O.
7 years
Nice start Beany, see if the scouts can get you any good players (for your standards)!
Login to Quote

have concerns with the tactic of ld and bpd at the back though, prefer standard dc and ld, or cover and stopper but i dont know your players

best of luck, id hope your advanced playmaker is a good dribbler from the mc position!
Login to Quote

Maldini Announces Friendlies In Preperation For A Tough Season Ahead

Paolo Maldini has announced that he has arranged 16 pre-season matchs for his side to give them the best possible chance to gel as a team and to maximise their chances to survive this season.

Glenn T
7 years
Brilliant start, liked your Leverkusen story but I think this one has the potential to be better. Those fixtures are interesting and hopefully you'll thrash the PSG kids

2013-04-03 12:15#89518 Glenn T : Brilliant start, liked your Leverkusen story but I think this one has the potential to be better. Those fixtures are interesting and hopefully you'll thrash the PSG kids

I just did all the fixtures as they will get the baord lots of money! This way it secures all our finances up


Paolo Maldini is proving that not only was he a worldclass footballer but he also has a great eye for a bargain. Maldini has signed six players for the team all as free agents. Maldini seemed escpecially happy with his first ever dive into a transfer market.

Esteban Dutra: An aging left winger who has decent pace and acceleration for someone of his age, his key strength is his footballing brain. He knows what to do and when to do it. He has plenty of experience in the footballing world and looks set to become a key player this season for San Marinio Calcio. 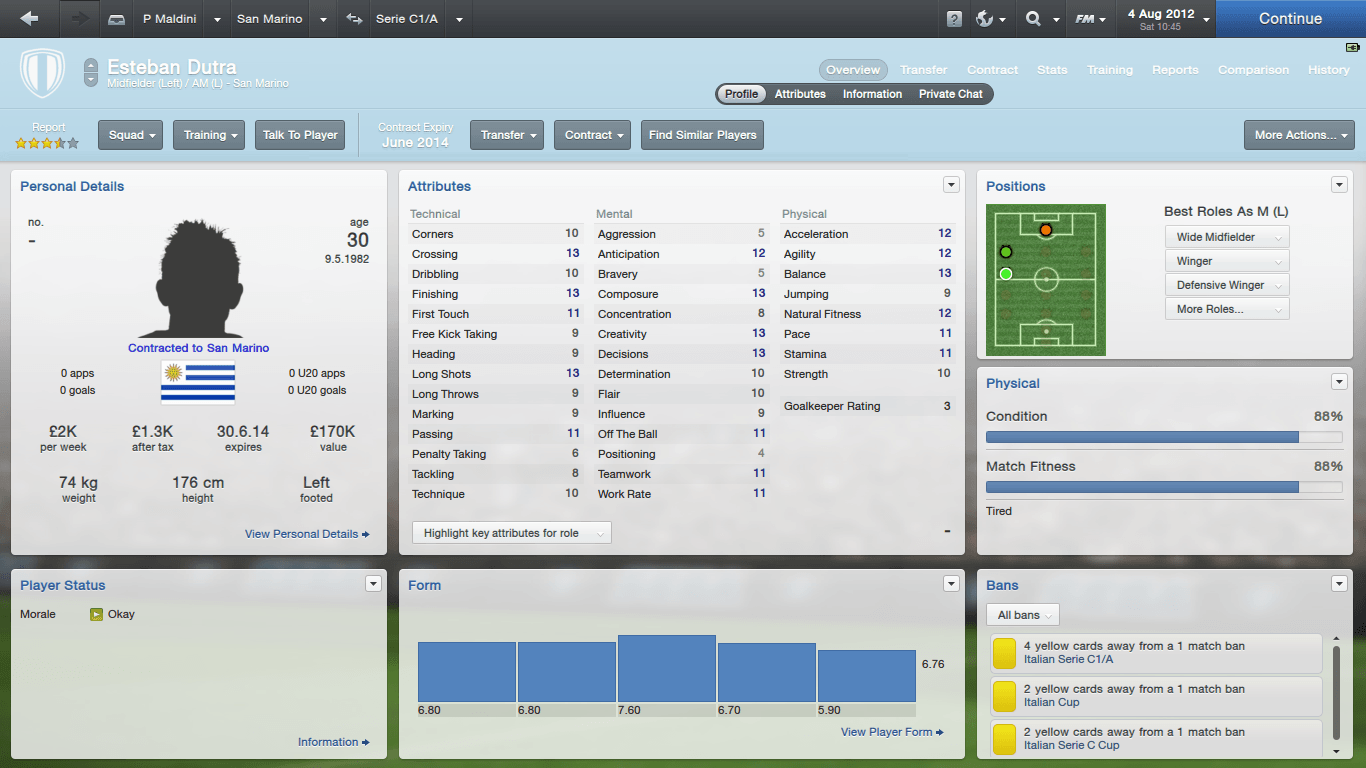 Stefano Olivieri: A player that has mainly been drafted in to be a back up center half which is a role he is more than happy to fill. Stefano is a vital part of the team as injuries can occur at any time and before the signing of Stefano the defensive line was look rather weak in depth. 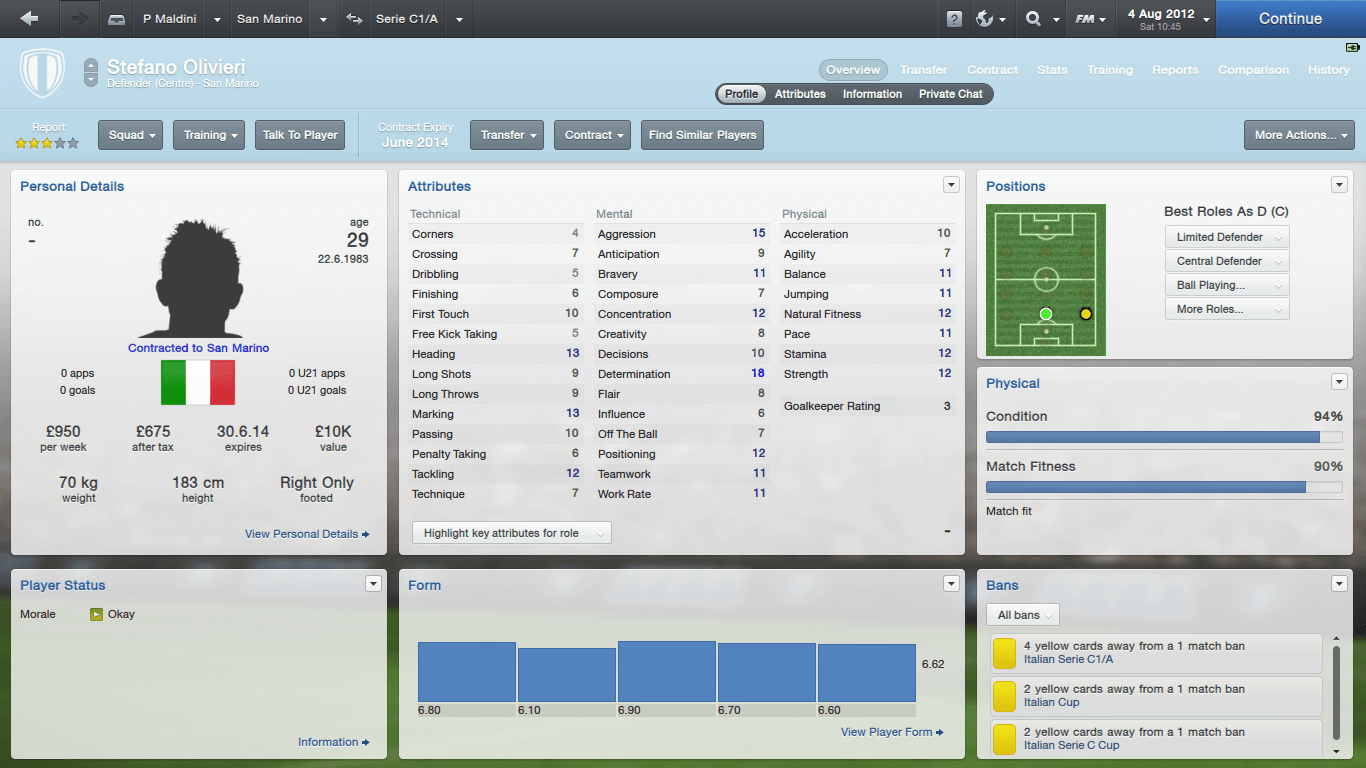 Riccardo Bonetto:One of the best leftbacks avaliable at this level Riccardo excells at being a team player and bringing the wingers infront of him into the game, but he can also track back very well and you will very rarely see him make a genuine mistake. 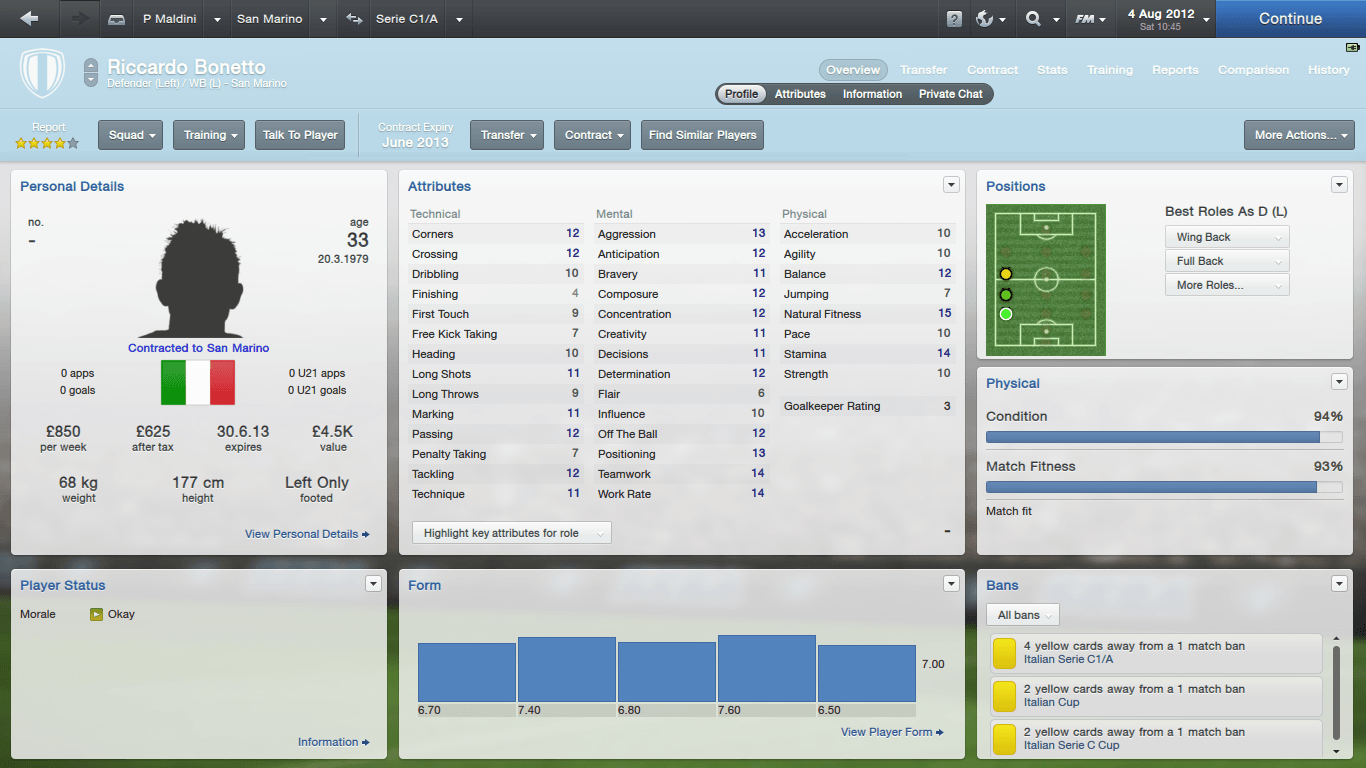 Fausto Rossini:A top quality striker for this league Maldini will be delighted to have secured his signeture so early on. Maldini has openly admitted already that he only plans to use one striker so this striker has to be unselfish and a great goal scorer all in one. Step forward Rossini. 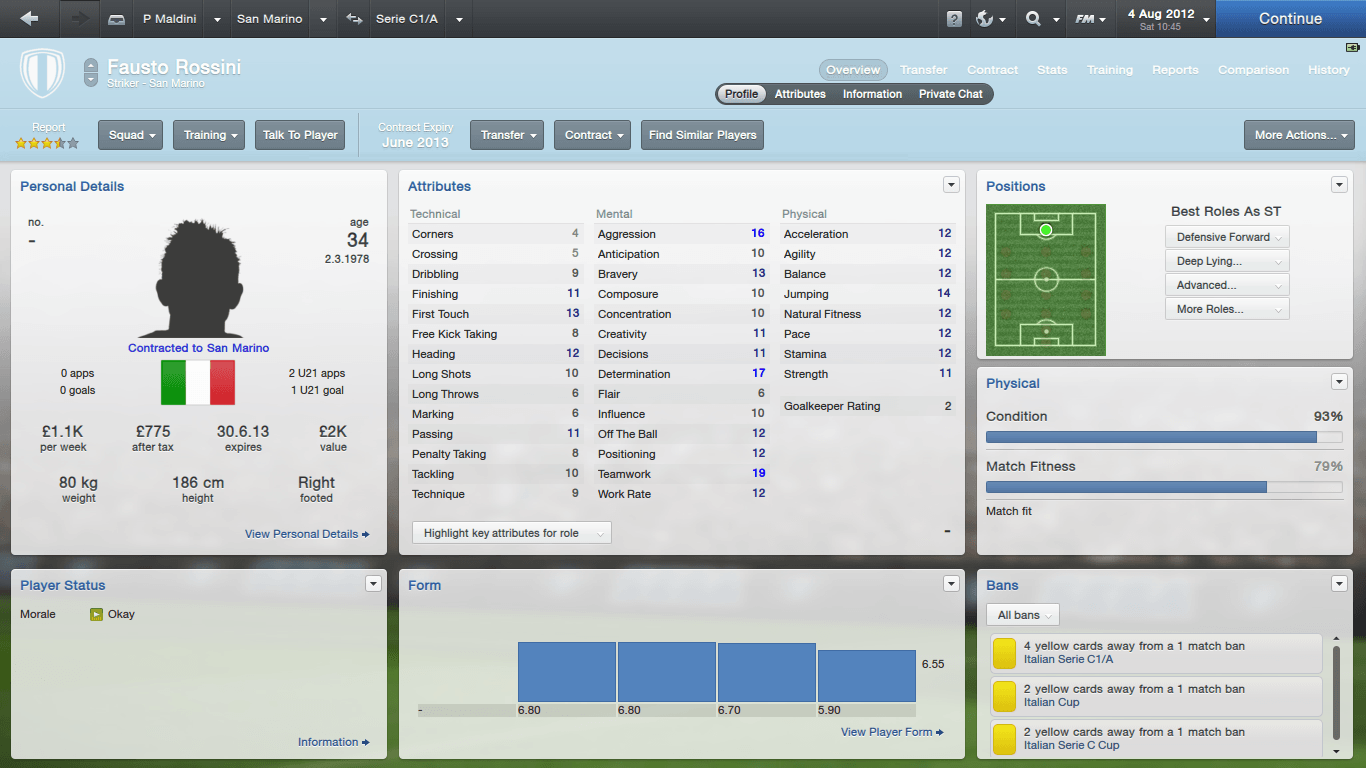 Laurent Montoya:Another ageing leftback to provide cover in the leftback position. He is by no means only of backup ability and has the ability to push for a starting spot, but Maldini has yet again shown he is keen to strengthen is defensive core if they are to survive this season. 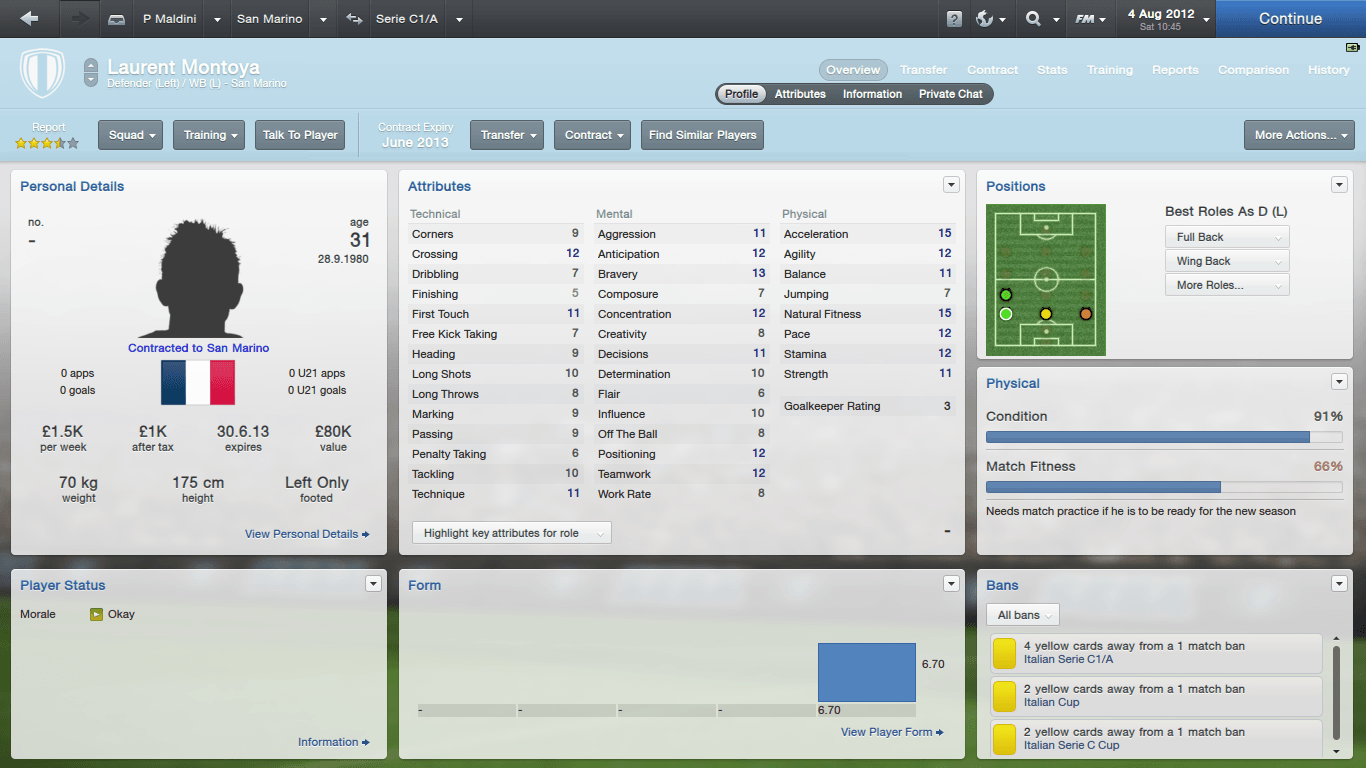 Donovan Maury:An ageing center back but by no means one of the oldest to be playing in Italian football. Maldini sees alot of himself in this player, stop the defender at all costs and very consistent. Donovan is sure to be a key player this season. 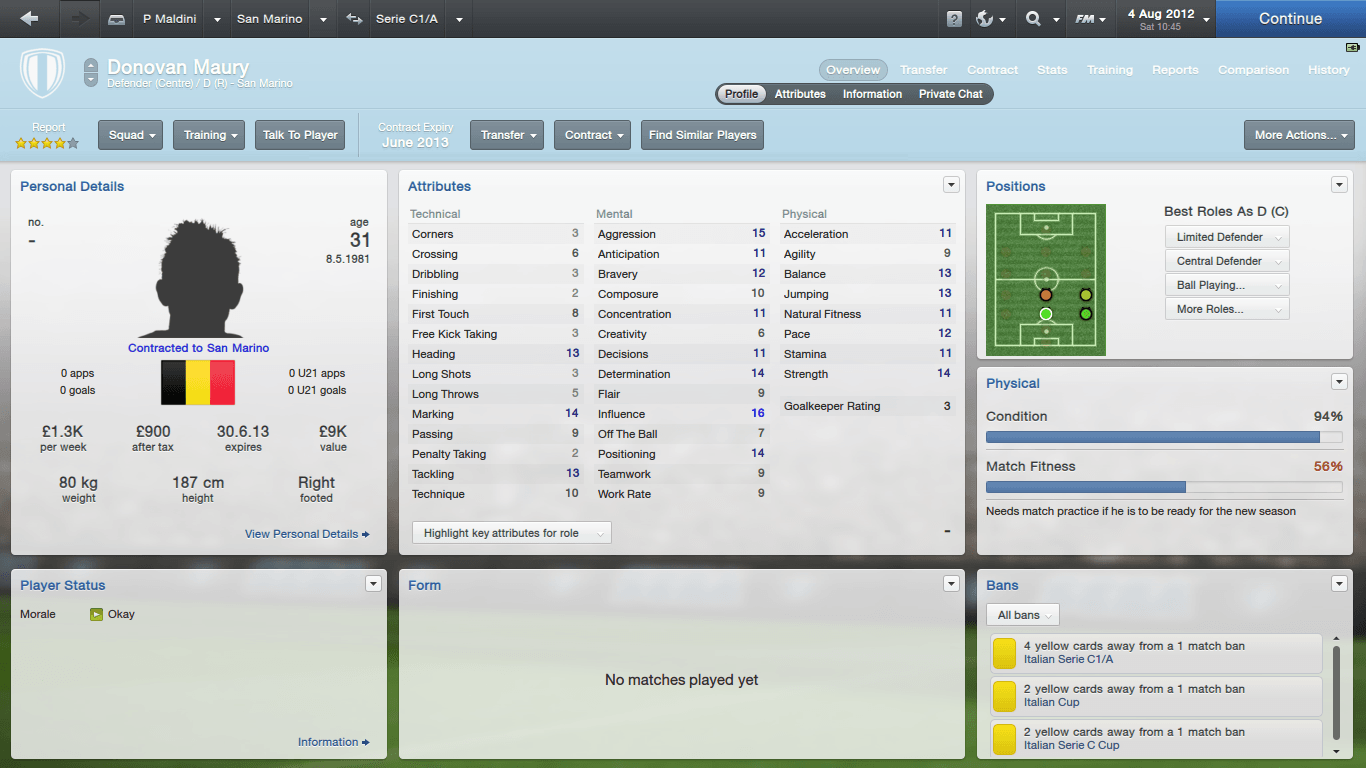 Maldini has told the fans that these players can honestly keep San Marinio Calcio away from any relegation battles that they are expected to so heavily be involved with. Maldini has made it obvious he wants a balanced team but has tried to strengthen his defense more than anything.
Login to Quote

You are reading "Maldini: Flirting With The Sammarinese.".