hurry up n announce the team ;p
Login to Quote


Thanks mate! And its my bday today so ill be on later on tonight!:)
Login to Quote

Try not to get too drunk

Try not to get too drunk

Cheers and thanks mate

ND IM SORRY I AINT PROMISING THAT!
Login to Quote

Jer
7 years
I NEED TO KNOW

You will soon!:P
Login to Quote 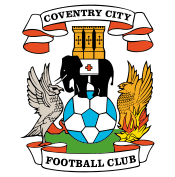 Coventry City Football Club is an English association football club based in Coventry, central England. They compete in League One, the third tier of the English football league system. Nicknamed the Sky Blues owing to the colour of their strip, Coventry City were formed in 1883 as Singers F.C., and they joined the Football League in 1919. Their only major trophy was won in 1987 when they beat Tottenham Hotspur 3–2 to win the FA Cup, listed by the FA as one of the twelve classic FA Cup Finals.

The club was an inaugural member of the Premier League in 1992 and had spent an impressive 34 consecutive seasons in the English top flight before their relegation in 2001. Following eleven seasons in the second-tier Football League Championship without any significant success, Coventry were relegated to Football League One in 2012, the first time in 48 years that the club were destined to play in the English league system's third tier.

From 1899 to 2005, Coventry City played at the Highfield Road stadium. In 1981 it became the first all-seater stadium in English football, though by the late-1990s the club's directors decided it was time to construct a larger stadium and chose a site in the Rowley's Green area of the city. The 32,609 capacity Ricoh Arena was opened in August 2005.
Login to Quote

best of luck managing them and looking forward towards your achievements with them.
Login to Quote

best of luck managing them and looking forward towards your achievements with them.

You are reading "On the road again.".