Liverpool Football Club have unveiled their new manager - the one the hope can take them back to the heights of the 80s.

And it will be an emotional return to his boyhood club for Liverpool's new boss, who is viewed as a club legend by most fans.

And so, it will be Sami Hyypia's name on the door of the manager's office at Anfield.

Hyypia first joined Liverpool as a player way back in 1998 and spent 10 years at his favourite club, captaining the side for several years.

At the age of 35, he left Liverpool on the expiry on his contract to play for Bayer Leverkusen in the Bundesliga. Despite his age, he was voted as the best defender in the Bundesliga in his first year at the German club. After two years as a player at Leverkusen, he announced his retirement and took up a coaching job at the club.

But with the sacking of manager Robin Dutt not long after, Hyypia took the reins of the club along with Sascha Lewandowski. Last season, after completing his coaching badges, the Hyypia took complete control as manager, leading Leverkusen to an impressive 3rd place finish, becoming the only team to beat Bayern in the Bundesliga that year.

His experience as a player, as a manager, and his inside-out knowledge of the club and the approval of the Kop made Hyypia the best candidate for the job, according to owner John Henry.

But Hyypia's task is no easy one to accomplish. With the club harboring ambitions of a Champions League finish, the former defender will need to massively build on a squad that only managed a seventh place finish last season, which leaves them without an European campaign this term.

With no European football, and Luis Suarez's desire to leave for a Champions League club made public, Liverpool will find it harder than ever to attract world-class talent in their bid for European football.

But hey, if anyone can do it, Sami can.
Login to Quote

Arvind
7 years
With one month left to go, some of you will be wondering why I decided to start a story now(although the first post was months ago).

Well, I want to have a story to see off FM13, and hopefully a successful one with my beloved Liverpool(who are incredibly hard to manage :L). And seeing the dearth of stories on the site currently as it is just a month left before the release of FM14, I thought I'd give you all something to read in the meanwhile.

Walter
7 years
Good to see it back Arvind, hopefully you can see this through till the release of FM14.
Login to Quote

Louis O.
7 years
One of the few Liverpool people I like

Jer
7 years
You don't like me, Louis? Great start Arvind, hope that your story lives long and prospers!
Login to Quote

Uruguayan desperate for a way out


According to several media sources, Luis Suarez has made it clear to Liverpool that he wants to leave Anfield this summer.

The controversial striker has attracted interest from Barcelona, Real Madrid, Bayern Munich and Arsenal after having a spectacular season for the Reds.

The Merseyside club promised to let him leave if they failed to qualify for the Champions League and Suarez is upset that they seem to be going back on their words. 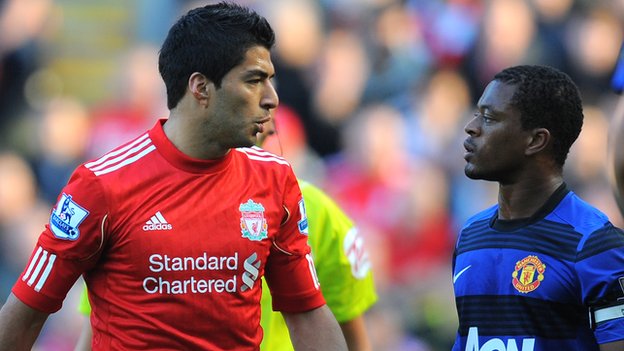 Luis Suarez is no stranger to controversy

The Uruguayan feels badly treated and thinks he is being targeted by the media as well as fans. He has even gone to the extent of going public over his concerns, and stated that he wished to join Real Madrid in a radio show in his native country.

Arsenal matched a £40m clause in his contract earlier in the summer but Liverpool turned down the bid and insisted that the clause only meant that they had an obligation to inform Suarez if they had received a bid of that amount or higher.


http://www.deegaan.com/wp-content/uploads/2011/08/Liverpool-vs-Arsenal.jpg
Liverpool have turned down a £40m bid from Arsenal already

But with still around £45m left in his transfer kitty, Arsene Wenger is ready to come back with another bid despite having just signed Real's Mesut Ozil for a staggering £42.5m.

Suarez's agent Pere Guardiola spoke to the press recently. "Luis feels hurt and betrayed. The F.A and also the fans are targeting him and he just wants to leave." The brother of Bayern boss Pep added, "Last season Rodgers told him that he would let him leave if they didn't qualify[for the Champions League]. He stayed on that condition and has put in 100% week in week out. But now they have a new manager again and they are going back on their words."

"Hyypia should be a gentlemen and allow him to go." he concluded.

If Liverpool still refuse to let him leave, the Suarez camp still has a card left to play. The player has not yet handed in an official transfer request, as that would mean he would lose out on millions in loyalty bonuses, but it is still an option to consider if he is desperate.
Login to Quote

Walter
7 years
Brilliant update, you could be a journalist

@edu: He may be one, but he's still a world class player. And by extension better than all Everton players.

edu1878
7 years
How Dare You Say that. Who is the only team undefeated this season???
Login to Quote


http://cdn.caughtoffside.com/wp-content/uploads/2013/02/Glen-Johnson-Liverpool.jpg
Johnson will play for Monaco next season along with teammate Enrique

Claudio Ranieri intends to play captain Eric Abidal - another of Monaco's big summer signings - in the heart of defense and a dearth of quality fullbacks has prompted him to make a move for Liverpool's fullback pairing.

However, it is not entirely bad news for the Kop, as the club earned a reported £40m sum from the sales of the two players.

Additionally, their replacements have already been brought in.

While it is understood that academy graduate Martin Kelly will inherit Glen Johnson's role at right back, Sami Hyypia has brought in Davide Santon - the man who replaced Enrique at Newcastle two years ago - to fill the open spot on the left.

The Italian joined the Tynesiders from Inter for £5m and has already made 8 appearances for the Azzuri - the Italian national team. But Liverpool did pay a hefty sum for the transfer of Santon, with Newcastle pocketing £15.75m in exchange for the player.

Loanee Aly Cissokho has been sent back to his parent club Valencia to make room for Juventus' Paolo de Ceglie.

de Ceglie enjoyed constant first team football in Turin until the arrival of Kwadwo Asamoah last season, who took up his spot in the first eleven. The 25-year-old, who is yet to be capped for Italy, joins Liverpool for £3.8m and will provide competition for his compatriot Santon on the left side of defense.

And for cover on the right, the Reds have roped in AZ's Dutch international fullback Dirk Marcellis for a price close to £3.5m.

The loss of Johnson and Enrique is certainly a blow to Liverpool's backline, but with good replacements already brought in, as well as the expert defensive coaching they will receive from Hyypia and his assistant - former AC Milan defender and assistant manager Mauro Tassoti - Reds fans can expect to see some good defensive performances over the next season.
Login to Quote