Today, Morten Olsem has left his role as Denmark manager after 12 years in charge. He has been the head coach of the Danish national team since 2000, guiding Denmark to the 2002 FIFA World Cup, 2004 European Championship, 2010 FIFA World Cup and 2012 European Championship.
The reason behind him leaving is still unclear but many think it is down to the fact he fell out with the Danish Football Association over a squad selection.
There are many candidates for the job. The favourite being Michael Laudrap of Swansea. Next favourite is Roberto Di Matteo then it is Fabio Capello of Russia.

The Danish FA have said they will make a decision in the coming days.


The Danish FA have announced goalkeeping legend Peter Schmeichel will be the national team manager. Schmeichel has had an outstanding career for club and country.

Peter Boles?aw Schmeichel MBE, born 18 November 1963) is a retired Danish professional footballer who played as a goalkeeper, and was voted the "World's Best Goalkeeper" in 1992 and 1993. He is best remembered for his most successful years at English club Manchester United, whom he captained to the 1999 UEFA Champions League to complete the Treble, and for winning UEFA Euro 1992 with Denmark.


Playing for Brøndby, Schmeichel won four championships in five years. The pinnacle of his career there was the team getting to the UEFA Cup semi-finals in 1991. This was what really got him noticed not only by football fans but also a certain Alex Ferguson, who bought him for Manchester United that same year. Schmeichel was purchased for little over half a million pounds, a bargain for one of the players who would go on to become one of the team’s all-time greats. 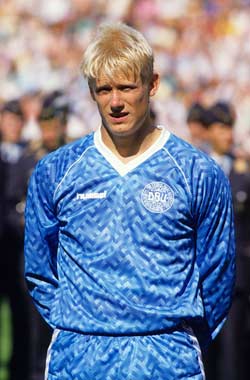 
The success kept coming in club football as well, with Schmeichel spending the greater part his career with United, becoming a much-loved figure amongst fans. During his eight years at Manchester United, Schmeichel was the stalwart of the team, rarely substituted and eventually made captain, and he reached the top of the Premier League no fewer than five times alongside his teammates. United also won three FA Cups and the UEFA Champions League.

There were few lows in this most successful of partnerships, although Schmeichel did fall out with Alex Ferguson and left the club briefly during the 1993-4 season. Ferguson reputedly forgave Schmeichel’s outburst when he heard him giving a humble apology to his team-mates in the changing rooms. More seriously though, Schmeichel was accused by Ian Wright of racism in 1997, a charge which was investigated but eventually dropped in the same year.

Schmeichel’s last season for United was perhaps his career high, as the 1998-1999 season saw the team capture the treble of the Premiership, the FA Cup and the UEFA Champions League. As well as being an integral member of the team, he was even captain during the Champions League final in the place of the suspended Roy Keane, lifting the trophy after a dramatic 2-1 victory in Barcelona. It was truly a perfect way to round off his career at United.


By now 35 years old, the gruelling English seasons had taken their toll and Schmeichel decided to make a change, signing with Portuguese club Sporting CP. He went on to win the Portuguese Premier league with them, but did not stay for long, moving again in 2001.

Instead, he remarkably returned to England where he signed for Aston Villa. That season, he befittingly became the first goalkeeper to score a goal in the Premiership, against Everton.

His brief sojourn in Portugal over, Schmeichel remarkably returned to England with Aston Villa. However, the shock was still to come as, after one season in the Midlands, he signed with United's historic rivals, Manchester City. During what would prove his final season, he managed to keep a clean sheet in the Manchester derby and contributed to a famous victory for City. Despite such moments, Schmeichel finally called time on his career at the end of that 2002-2003 season.

For Denmark, the Great Dane has 129 caps and 1 goal, yes, ONE GOAL. Not bad for a goalkeeper. However in his club career, he has 648 appearances and 9 GOALS.

k1rups
7 years
Great start OTBC and I love Schmeichel so will follow this story! Lets see if one of the best keepers to have graced the game can become one of the best managers

OnTheBallCityNCFC
7 years
First day in the job for Schmeichel and he is sitting down with his newly appointed assistant, Niko Kovac, discussing the team.

NK - Here is a team report for you Peter.

PS - Thanks Niko. Well it is easy to know who are stand out players are. Daniel Agger, Christian Eriksen and Niklas Bendtner

NK - We have a friendly in 3 weeks time. What are you going to do in that time?

PS - Well firstly i am going to hire some staff as we currently have no coaches. After that i am going to go on holiday and get wasted on the cash the Danish FA are paying me for this job!. I'll be back a week before the game against Lithuania.

No1VillaFan
7 years
I like international stories I will be reading this, Schumichel was awesome at villa so this has my support
Login to Quote


About time!
Login to Quote

Rablador
7 years
Hopefully he can develop Kasper into a godly goalie!

Arvind
7 years
I reckon Schmeichel will be ready to take over Manchester United in a few years' time...

I took over the Danes after World Cup 2014, so it'll be interesting to see how the two years go before I took over. Good luck!

OnTheBallCityNCFC
7 years
Krups - thanks. I hope so!

Jason - Hope you enjoy it

a esbech - is he not a good manager in real life then?

Neal - hopefully I can lead them to World Cup glory

Schmeichel: Everyone will have their chance


In Schmeichel's first press conference as Denmark manager he stated that he will give a lot of different players games. He said:

"There is a lot of good talent in this country and if a player performs well enough, they will play. Whatever their reputation, club or age"

Also when asked about managing his son Kasper he said: "I will not be biased in favour of Kasper. We have a better goalkeeper in the form of Lindergaard and he will be playing most games. Not Kasper."

Also when asked about the possibility of club management he respeonded: "Club management is definetely something i want to do in the future. My main aim at the minute is to qualify Denmark for the 2014 World Cup but after that, who knows?"

Neal
7 years
Lindegaard is good but he never plays at United, and he never has match fitness and makes mistakes. Schmiechel becomes pretty good as well, so keep an eye out, he is your son after all

Nice update, keep it up!
Login to Quote

Here is an overview of the groups of the World Cup qualifying stage: Not a bad group for Denmark. Realistically we will be fighting Czech Republic for that 2nd place playoff spot. However with some good performances we could beat Italy to top spot!
Login to Quote