What is this story?

The plan for this story is to travel from each of the teams below and rising them to there former glory.

Do you have any suggestion on who to add to this list, comment below on who i should include and i hope you will enjoy my story.

BeanyUnited
8 years
Uhm what about the mighty Northampton Town!!!!!
Login to Quote

Ziechael
8 years
You already have the only one that counts, LEEDS LEEDS LEEDS!
Login to Quote

FM Seddon also known as Ben Seddon has taken over as Rangers manager. Several hours after being the manager he confirmed to journalists " I am here to re-build Rangers to the super power they formerly were. Then when that is over my role at the club has been completed."

Rangers Football Club is a football club based in Glasgow, Scotland that plays in the Third Division of the Scottish Football League. Their home ground is Ibrox Stadium in the south-west of the city. Founded in Early March 1872, Rangers were one of the ten founder members of the Scottish Football League, and remained in Scotland's top division until the end of the 2011–12 season. 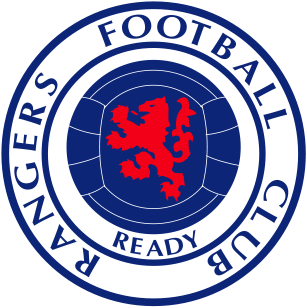 Info and picture taken from Wikipedia
Login to Quote

Jack
8 years
Good start, will be good to see how you go with Rangers
Login to Quote

FM Seddon's creativity is clearly shown in his tactics. Many people have criticized his tactics as they are either to attackive or he is trying to emulate something Rangers aren't at the moment.

The first tactic is a 4-5-1/ 4-1-2-2-1. This tactic relies heavily on the wingers attacking stats as they cut inside then shoot on goal. This tactic is the attacking formation that will be used against smaller or weaker teams as the all out attack mentality will create many chances on goal and if the current ability of the players are excellent this tactic could be used against every team in the league. (PS Arvind gave me the link to this tactic). 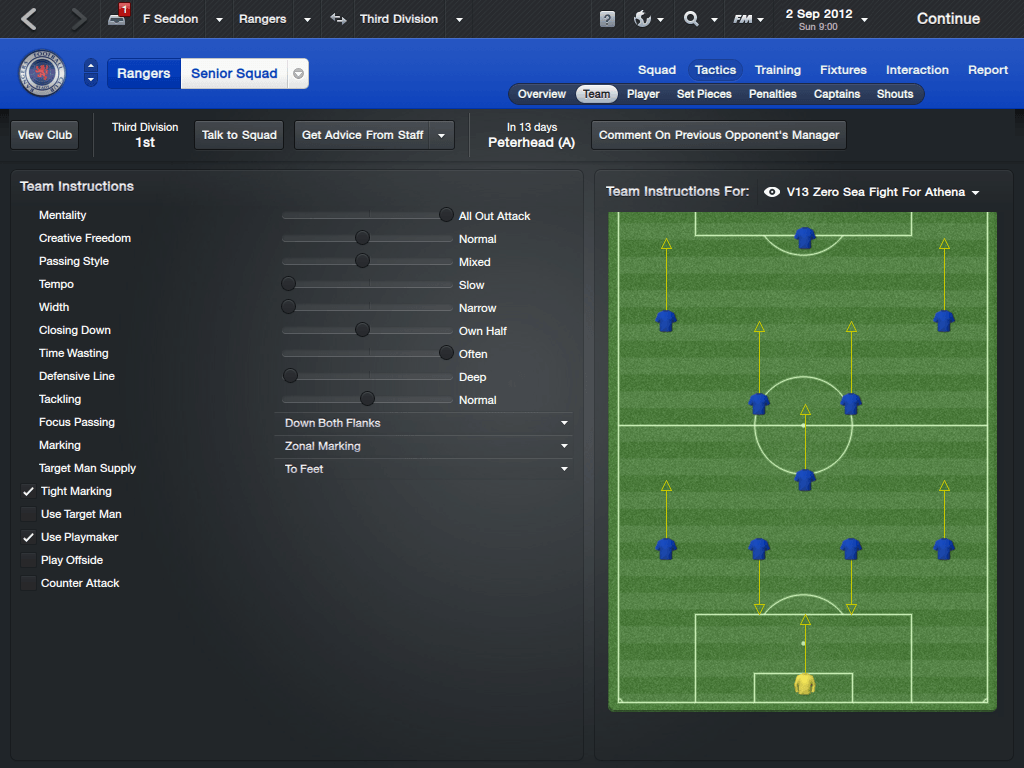 This tactic is a 4-2-2-2 box as there is a box between the defensive midfielders and the attacking midfielders. This tactic is based on the past success of Villarreal as the two Am's will feed the ball to the pacy strikers. This formation will boss the oppositions box if the centre backs are slow. The main stats for the AM's will be creativity, passing, technique and probably teamwork too. One of the DM's will help support the centre backs and the other will be a holding midfielder. 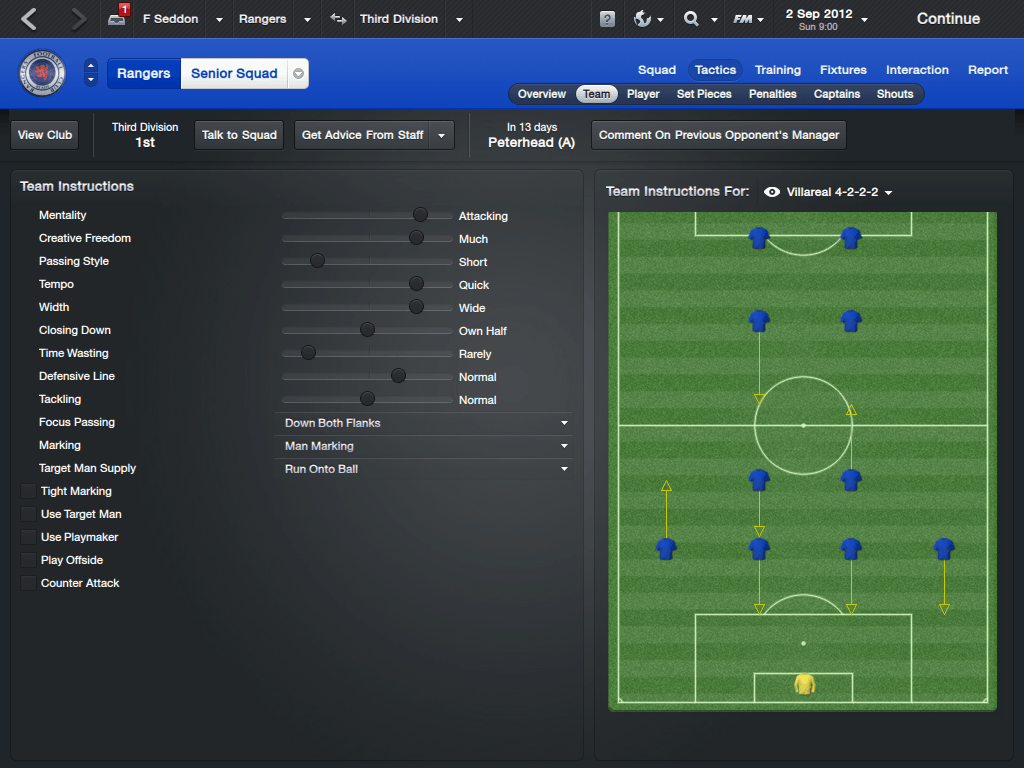 This tactic is a 2-4-1-2-1. This tactic is based on the success of Brazil. This formation should boss the midfield and stop most of the attacking players of the opposition reducing the amount of shots they have and the players trying to snatch the ball away from the attackive players of the opposition. One of the DM's will drop back to support the centre backs turning the formation into a 3-3-1-2-1. This formation also relies on speedy forwards as the majority of the players are mostly defensive. Good luck on your adventure! Its a tough challenge.
Login to Quote

Toon
8 years
Rangers will be a good journey. Nice to see how it compared to mark's.
Login to Quote

Transfers, None of them are Scottish.

The three transfers totaled a fee of 180k as two of them were free agents and the other was a 180k striker that turned out to be worse than his scout report. 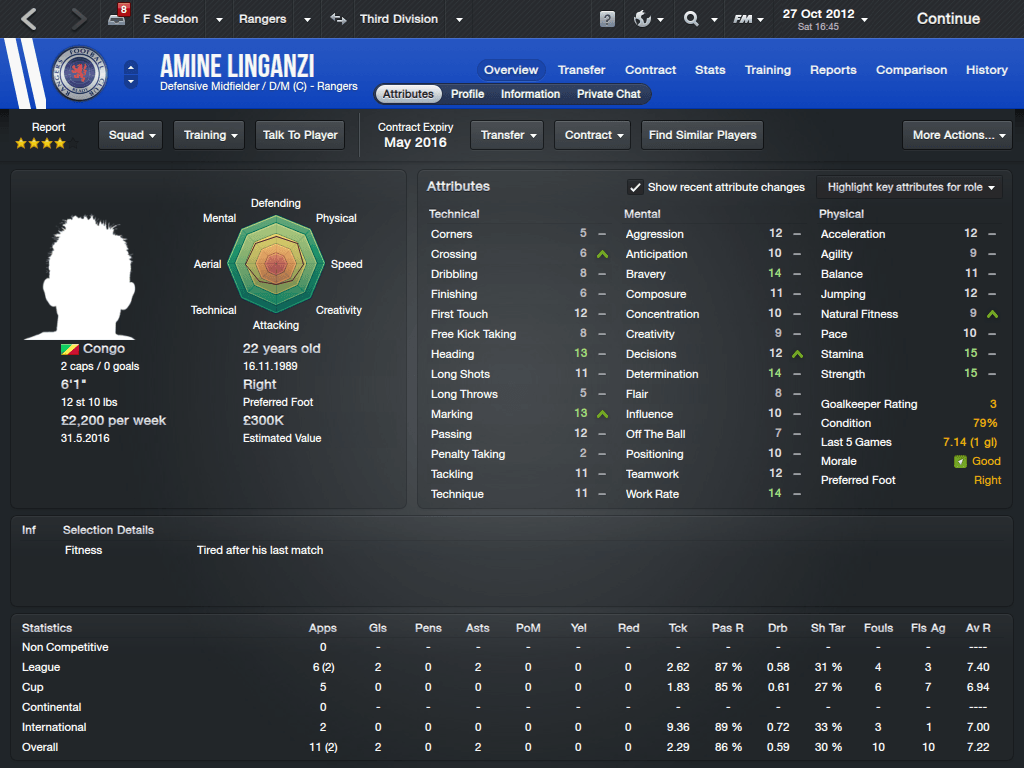 Dino is a Swedish striker who was bought from Fulham for a fee of 180k. His scouting report said he was 4 star potential but when he joined Rangers he had a 2 start potential and a 2 1/2 potential. He is slightly taller and slightly faster than Lingazi but toher than that he is a waste of space and money. 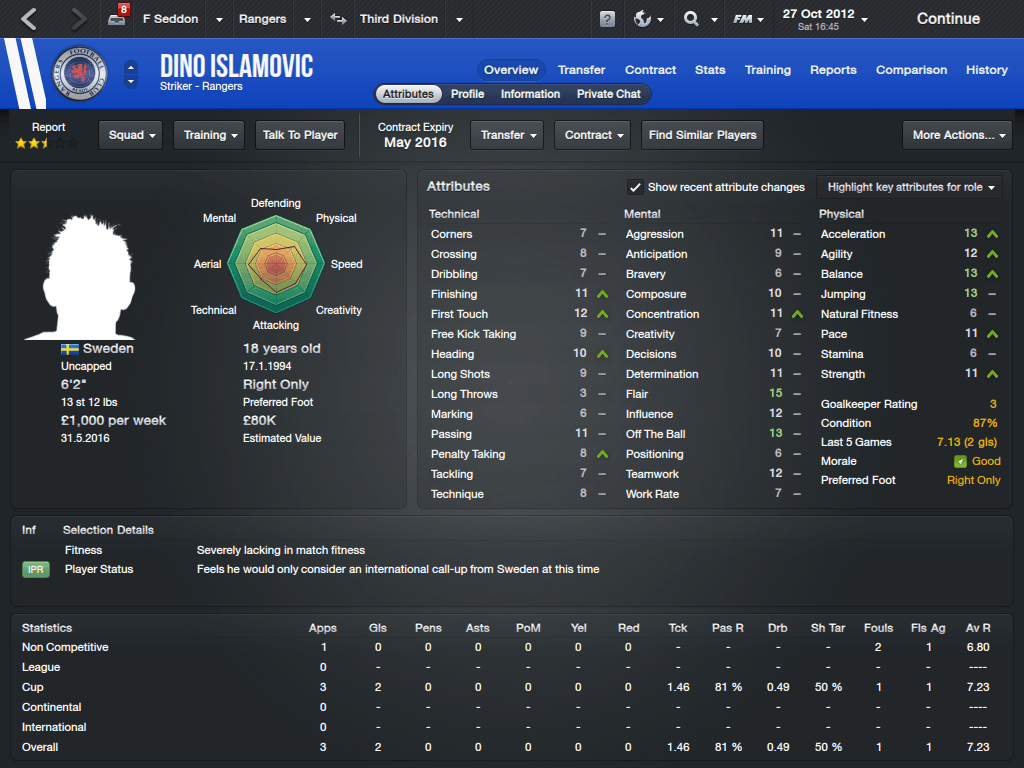 Habib Beye is a Senegalese international with 38 caps. He is an experienced right back who can also play as a centre defender. He is quite slow but his strength and balance make up for this. Although he is 35 i could see him at Rangers for another season or two as Beye is Rangers best right back. Because of his age his stats are starting to decline but that is expected. 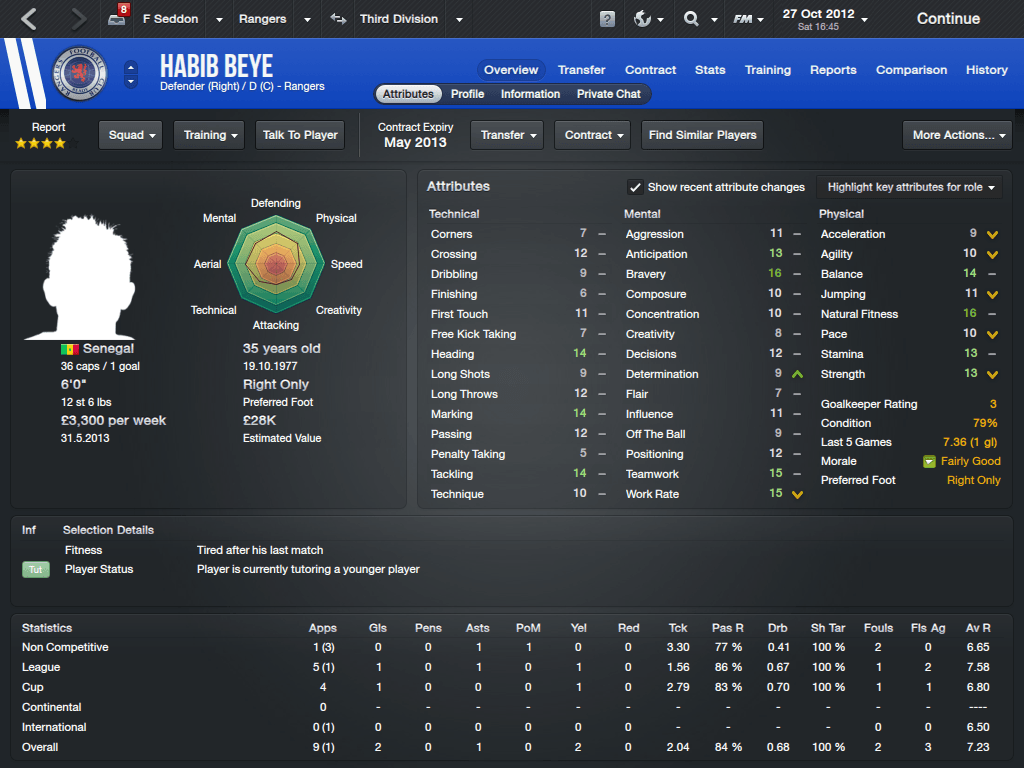 olatangen
8 years
Good start! Had a great time managing Rangers in my last save. Good luck, mate!
Login to Quote

Guys i will be updating with the fixtures shortly but have you noticed something. Yes its a banner. It was created by the lovely Kane and i greatly thank him. I like and i hope you like it too.
Login to Quote

You are reading "Rising the fallen- Rangers".