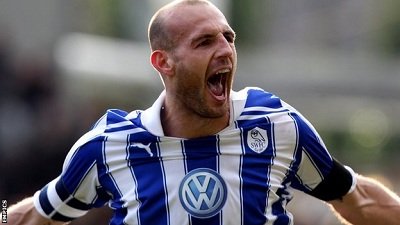 Seeing a player recover from being tossed aside by another club and then recover to have a great career is a feeling that really satisfies me. Someone that says "no!" in the face of adversity and doesn't give up and comes back to prove all his doubters wrong.

Diego Forlan is one of these players. Ultimately he flopped after his big move to Manchester United back in 2001, scoring just 10 goals in a three-year spell. Since he left in 2004, he has gone on to win the Europa League and UEFA Super Cup with Atletico Madrid, as well as the Copa America with Uruguay. Not bad for a player tossed aside by United, one of the biggest clubs on the planet.

Another player who fits this bill is Rob Jones, an English centre-back who is now nearing the end of his career. Albeit, he does fit into this category on a slightly smaller scale. It all started in the 2011-12 season whilst he was still under contract with Sheffield Wednesday. He signed on a free transfer in the summer of 2011, after a successful emergency loan spell towards the end of the previous season. He was appointed team captain by then-boss Gary Megson, and started the season very well, making 33 appearances in the league. However, despite Wednesday being in the chase for promotion throughout the campaign, there was a relentless torrent of abuse for Jones, who seemed to always do the wrong thing, such as play the wrong ball, not commit the tackle, or be at serious fault for a goal. I think this all comes down to his lack of pace, which understandably comes with his age and size. No player of that height can still be nimble and agile. It's just a physical impossibility. So that contributed to his downfall at Wednesday.

However, despite his lack of consistency in performances, bosses Gary Megson and then Dave Jones insisted on including him in the starting line-up, until a 2-0 home win over Preston, in which he picked up a yellow card, meaning he reached enough yellow cards to merit a two-match suspension from the Wednesday side. He was replaced in the side by Spanish defender Miguel Llera with six games of the season left. Llera, sporting his famous black head-guard had joined on a free from Blackpool earlier in the season, and had struggled to break into the first team. However, this was his opportunity, his time to shine, and he wasn't going to pass it up. In the final games of the season, Llera netted four goals, including a decisive goal in the second to last game of the season, against Brentford.

Even though Rob Jones had been club captain for the entirety of the season before that fateful game against Preston at Hillsborough, it shows what the club and the management team really thought of him, as he failed to even make an appearance as a substitute once his suspension was over. He had been well and truly tossed aside, and that can't have felt good. However, I am of the belief that Wednesday wouldn't have won promotion if Llera hadn't come into the side. I can't see Jones contributing those goals, meaning we wouldn't have bagged those points to go up. However, it still doesn't make it alright to just toss a player aside like that.

This is where Rob Jones started his recovery. He was let go on a free transfer to Doncaster Rovers at the start of the summer transfer window in 2012. Rovers had just been relegated the previous season, and were looking to bounce straight back up. Jones, having just been promoted from that league with another side, fit the bill perfectly, and joined Donny. He was named team captain for the 2012-13 season, and didn't disappoint, scoring seven goals in the league, in 44 appearances. Doncaster won promotion back the Championship after a dramatic 1-0 win at Brentford on the last day of the season. Brentford missed a penalty very late on in the game, and Rovers immediately caught them on the counter to go down the other end and score, sealing their return to the Championship as League One winners.

And we can't forget who captained that Doncaster Rovers side: Rob Jones. So he's won promotion with two different teams, in successive seasons, as club captain. Yet somehow he's considered not good enough for Wednesday, and just let go without a thought? I think Wednesday made an error of judgement letting him go for free, as he then demonstrated to us with Rovers that he still had a lot to offer. I have to salute Jones' perseverance that he got back up and came again after being let go by Wednesday. Now comes his next test: show he can do it in the Championship. He may not get the chances now, due to his age, but if he does, I for one will be watching eagerly.
Login to Quote

You are reading "Rob Jones: The English Trojan".