Duncanwilliam7
9 years • Edited
http://www.barcelonafootballblog.com/wp-content/uploads/2011/03/FC_Shakhtar_Donetsk_vs_Arsenal_Preview_2010.png
For this challenge I have decided to take charge of FC Shakhtar Donetsk, one of my favourite clubs in Ukraine and a club with very good Brazilian influences and players.

Shakhtar is located in the city of Donetsk, Ukraine a city of just under one million people. Shakhtar has appeared in several European competitions and currently is often a participant of the UEFA Champions League. The club became the first Ukrainian club to win the UEFA Cup in 2009, the last year before the competition was revamped as the Europa League. They are one of only two Ukrainian clubs, the other being Dynamo Kyiv, to have won a major UEFA competition. The club plays its home matches at the Donbass Arena. Which can hold up to 52 187 and cost about £300M to build.

Shakhtar was founded in may 1936 and is 77 years old, their nickname is the Miners and their current chairman is Rinat Akhmetov. The club is also very financially secure and invest heavily in youth talents from outside the country as well as inside the country.

Shakhtar's biggest rival today is Dynamo Kyiv. The match between them has grown into what is called the Ukrainian derby. The stadiums in Kiev and Donetsk are nearly full for matches between the two teams and are the main football events within the country. The other rivalry with Metalurh Donetsk is local and, although not as significant as games against the rivals from the capital, the games between the two Donetsk teams have been proclaimed the Donetsk Derby.

Among the extinguished rivalries are the games against Spartak Moscow and, particularly, the third place champions Dinamo Tbilisi of Georgia that took place at times during the Soviet Top League. Another interesting rivalry, the Donbas Derby, is with Zorya Luhansk, which gather a significant crowd in Luhansk. During the early Ukrainian championships, another interesting rivalry developed with Chornomorets Odessa labelled the "Miners vs. Sailors," which declined with the turn of the millennium due to inconsistent performance of the Odessa-based club.


Glory to you, Shakhtar!
Heavens of football stars
Will always be on your side,
And the light of your best dreams
Is shining from above.


Beauty of green fields, that's for you, Shakhtar.
My fate is in your hands, you are the best, Shakhtar.
And for you, Shakhtar, the medal of my love
Will always shine on pitch where you are,
And forever will protect you from defeat
The brightest football star!

My aim for this project is to get Shakhtar to the UEFA Champions League Final within 5 seasons, I can not spend more than £30M on an individual player and must try to keep as many Ukrainian players as possible in the team. In my first season I will be trying to work with what I already have and iron out any kinks in my staff, training and tactics. I will be making a few signings that will hopefully be molded into stars of my UEFA Final time over the 5 season period.

Any feedback is welcome, suggesting or anything thats on your mind. PS this is on FM12 as I cant afford FM13.
1
Login to Quote

Duncanwilliam7
9 years
After a few weeks in charge, things seem to be going well. Only one loss so far, that coming in my first game in charge and just so happened to be in the Super Cup final, Lost 2 - 1 to Dynamo Kyiv our fierce rivals. Another problem I've been having is the amount of injuries suffered by my first team players, Pyatov, Eduardo, Ilsinho, Chygrynskiy, Stepanenko etc.
Despite this loss, I have won all 5 of my League games and am sitting top of the Ukrainian Premier League with 15 points, followed by closely by Karpaty (one of our affiliated clubs) and Arsenal kyiv on 13 and 12 points respectively. 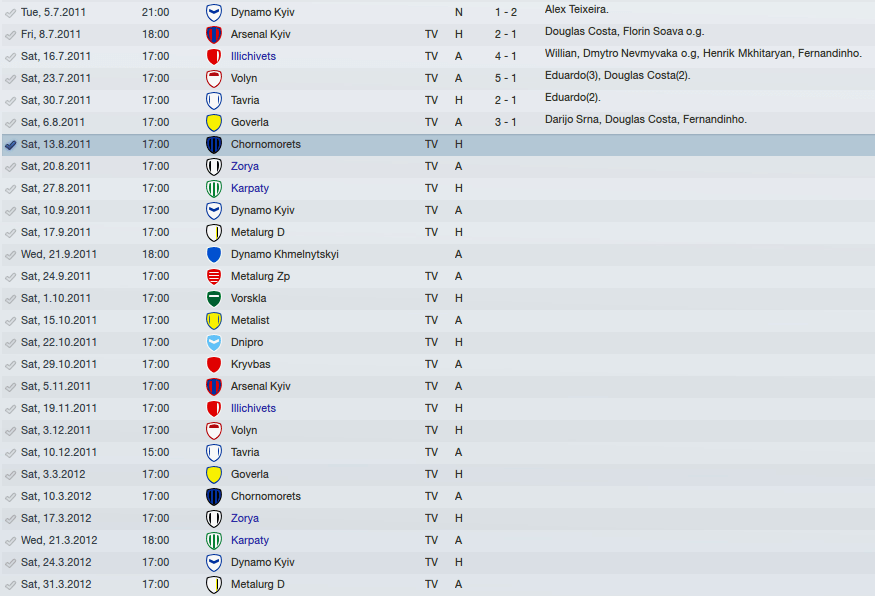 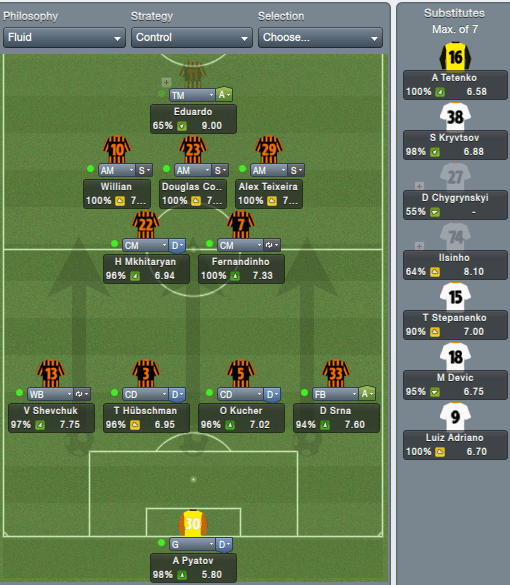 On the transfers front Ive tried to keep things to a minimal, but have mistakenly sold Razvan Rat to Juventus :doh: thought I counter for more, but obviously made a mistake. Not much of a problem as thins means I can look for a younger LB. Which is what I will be trying to sign in this window. Im also looking at selling Luiz Adriano to free up some space for a better Striker in January. Any thoughts as to who you guys think I should sign? would be much appreciated. 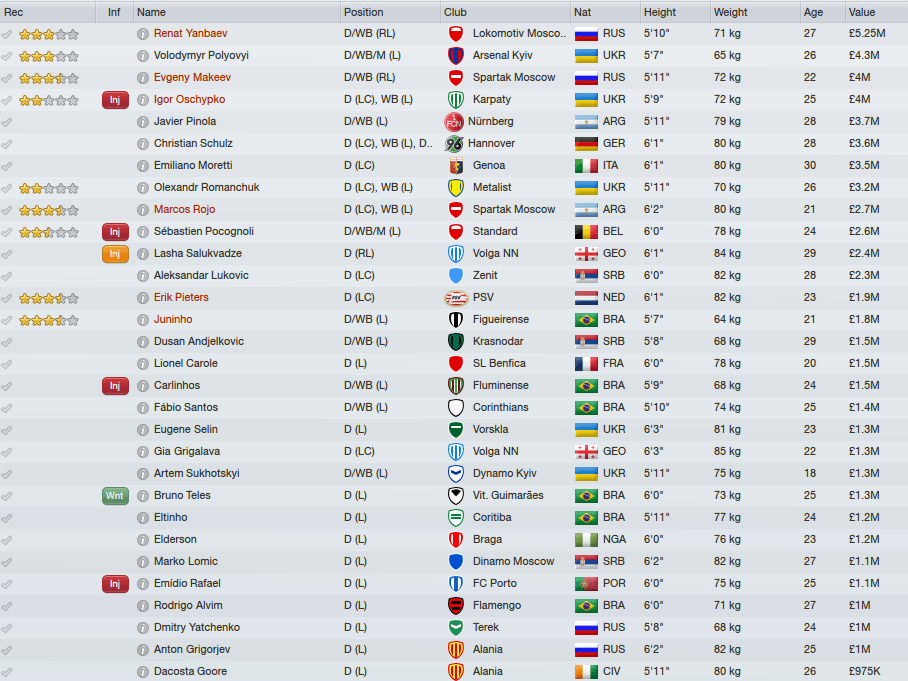 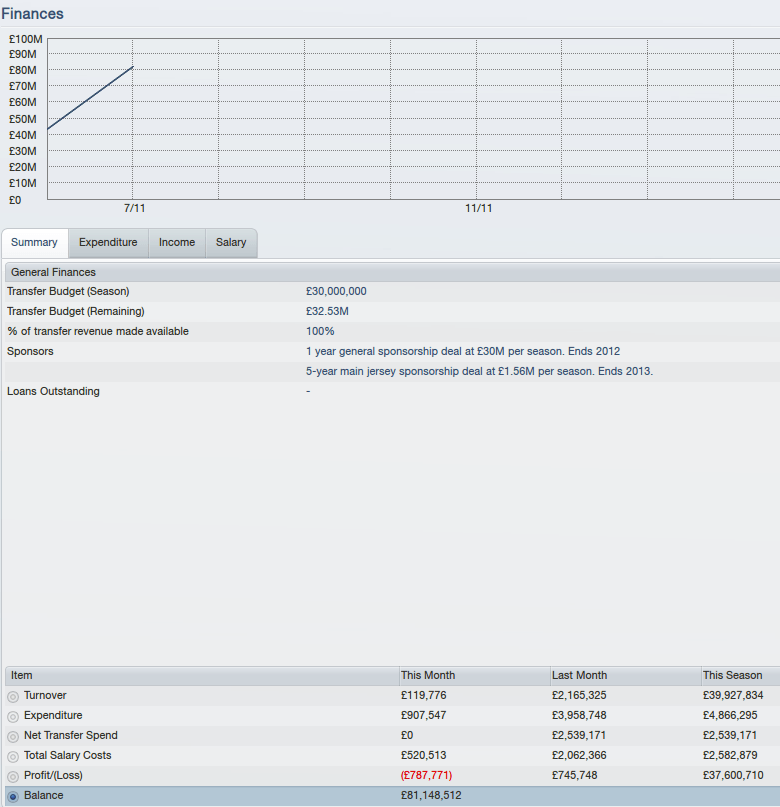 So to sum up, not a bad start a bit disappointing about the Super Cup but was my first game in charge. Have a browse through the list of LB's and post who you think I should sign

wellsy1498
9 years
Good luck mate Shaktar is hard at first due to the Ukranian players rule so just keep at it and eventually you will succeed.
Login to Quote

Thanks mate, yeah Im trying to bring some talented home based youths through the system to make them starters in the future, players like Kryvtsov, Tetenko, Chaykovsky, Sobol, Rakytskiy, Butko, Stepanenko, Vitsenets etc.
Login to Quote

Deleted
9 years
Fantastic start. Not sure if seen you here before so welcome! Secondly, great start to the season. Thirdly, if you want a nice signing up front, a cheap option is Damari, Israeli striker. Personally, I think you should give Luiz Adriano a chance but if not, flick through leagues like Brazilian, Portuguese or Argentinian. Some quality future stars around for fairly cheap.
Login to Quote

Blue
9 years
Good start so far, keep it up mate

Oh, and welcome to FM Scout

Duncanwilliam7
9 years
Thanks for the advice, the thing is I normally play a lone striker so having Eduardo and a backup is all I need really. Was thinking of letting Hubschman and Adriano go, could fetch about £16M to £20M for the twp, buy a good forward and maybe sell Devic or loan out Dentinho.
Yeah only recently started posting here, used to only browse the forums :p but have registered about 3 years ago.
Login to Quote

Glenn T
9 years
Just a small question, why are you centering every single post of yours?

LOL, because it makes my posts neat and look professional. Dont you think?
Login to Quote

9thCodebreaker
9 years
It's a shame i cant play them on FMH13...good luck though!

LOL no worries Dynamo beat me every time

Why cant you play Shak on FM13?
Login to Quote