How I got the job


Tottenham Hotspur have widely been regarded as one of the up-and-coming superclubs from London. Well, it’s not as if we didn’t have plenty of them anyway – Chelsea, Arsenal, West Ham United (I joke! I joke!). But the appointment of Andre Villas-Boas (his parents must have lived in a huge house surrounded by giant snakes) signalled chairman Daniel Levy’s desire to bring attractive football and a winning mentality to the club.

Alas, by January, the plan backfired. Well, maybe not quite backfired. The plan exploded in Levy’s face like a stinkbomb from hell, leaving everything in the club feeling like shite. At this point, Levy basically called up Mr Villas-Boas and said to him, “Andre, I like your face. I like your eyes, I like your stubble. But mate, sadly, your management is rubble. So long, and thanks for all the fish.”

Mr Villas-Boas, unacquainted with British humour writers, initially understood this to be a joke and laughed. But when he turned up at White Hart Lane the next day, he found that they had changed the locks on the doors, and someone had left his things in a box in front of the gate. All of his prized possessions, including his voodoo dolls of John ‘I’m not racist, I just called him a n*****’ Terry, Fat Frank Lampard, and Ashley ‘I a dick but I am awesome so fuck you’ Cole. He almost didn't recognise the Roman Abramovich doll because it had so many pin holes in it. He was worried. But then he saw that they had also safely deposited his autographed portrait of Jose Mourinho and he breathed a sigh of relief. He got into his Maserati and drove away.

On January 12, with the team planted at the bottom on the league table, Levy announced the appointment of a new manager. Apparently, he was the only one who signed up for the job. The mysteriously named Pac Man has taken charge at Tottenham Hotspur. Will he succeed?
Login to Quote

What I found out on the first day


When Pac Man walked into the office on the first day, he found a neatly typed letter from Daniel Levy on his desk. This is what the letter said:

I don’t know you (very well), but if you fail to keep this club in the Premier League, not only will I fire you, but I shall also find you, and kill you.

PS: Just thought I’d share a few statistics with you:

There was a knock on the door and Sigmund Freud walked in the door.

“Oh, damn, I thought your name was Freud. I’m slightly disappointed. So you don’t dream about killing your father and sleeping with your mother, do you?” Pac Man asked.

“Er…can we talk about football?” Freud, sorry, Freund, asked instead.

“Did you answer my question with another question?” Pac raised an eyebrow.

“Is there a problem?” Freund was confused.
“Wouldn’t you like to know?” Pac Man wanted to know.

“Oh, for fuck’s sake. I’ll be in my office. Call me if you need me.” And Freund walked out.

Man sat down and looked at the Team Report Freund had left behind. The goalkeeper situation was sorted. Lloris and Friedel were good. The defense worried him slightly, with only 3 fullbacks in the squad. He might need reinforcing there, particularly if injuries were to strike. In midfield, he had too many people capable of playing through the middle and only 2 wingers.

“Maybe I should have more Red Bull,” he thought gloomily, “Red Bull gives you wingers, doesn’t it? Or was it wings? Whatever.”

But it was obvious where he needed to strengthen first.

He made a short phone call.

“27 Million? But he’s injury-prone! Tell you what … be a lad and accept 22 Million, and I’ll throw in a couple of nude shots of myself, eh? What’s that? Oh, you’ll accept 21 Million if I promise never to sext you? Ok, done. 21 it is. Have him wrapped up in bubble-wrap and sent over on the next flight, thank you.”

Then he thought to himself, “Hmm … maybe I should have spoken to Daniel first.”
Login to Quote

What the Newspapers Said

Tottenham Hotspur have confirmed the transfer of Stefan Jovetic from Fiorentina for 21 Million (club record) with half of it going in monthly installments. There are also rumours that Mr. Man is in the market for another player, a fullback.

Davide Santon has brought his short term affiliation with Newcastle to an end by signing for Tottenham Hotspur. When asked why, he confirmed that they offered him more money. “Obviously, I wouldn’t take a paycut to move, would I?”

An Interview with Pac Man

This newspaper is pleased to bring you the following interview with Pac Man. We spoke to The Man (he hopes this nickname will catch on) for a few minutes on the phone.

How does it feel to be appointed Manager of Tottenham Hotspur?
It feels like being appointed the Captain of the Titanic just before we hit the iceberg.

Right. So, um … have you assessed the squad? Do you think you will survive?
Yes.

Well, anyway, you’ve spent a fair amount of the chairman’s money in the January window. If you survive in the league this year, will you spend again for next season?
Next season? … *laughs* … *disconnects phone*
Login to Quote

Here's how it went down: 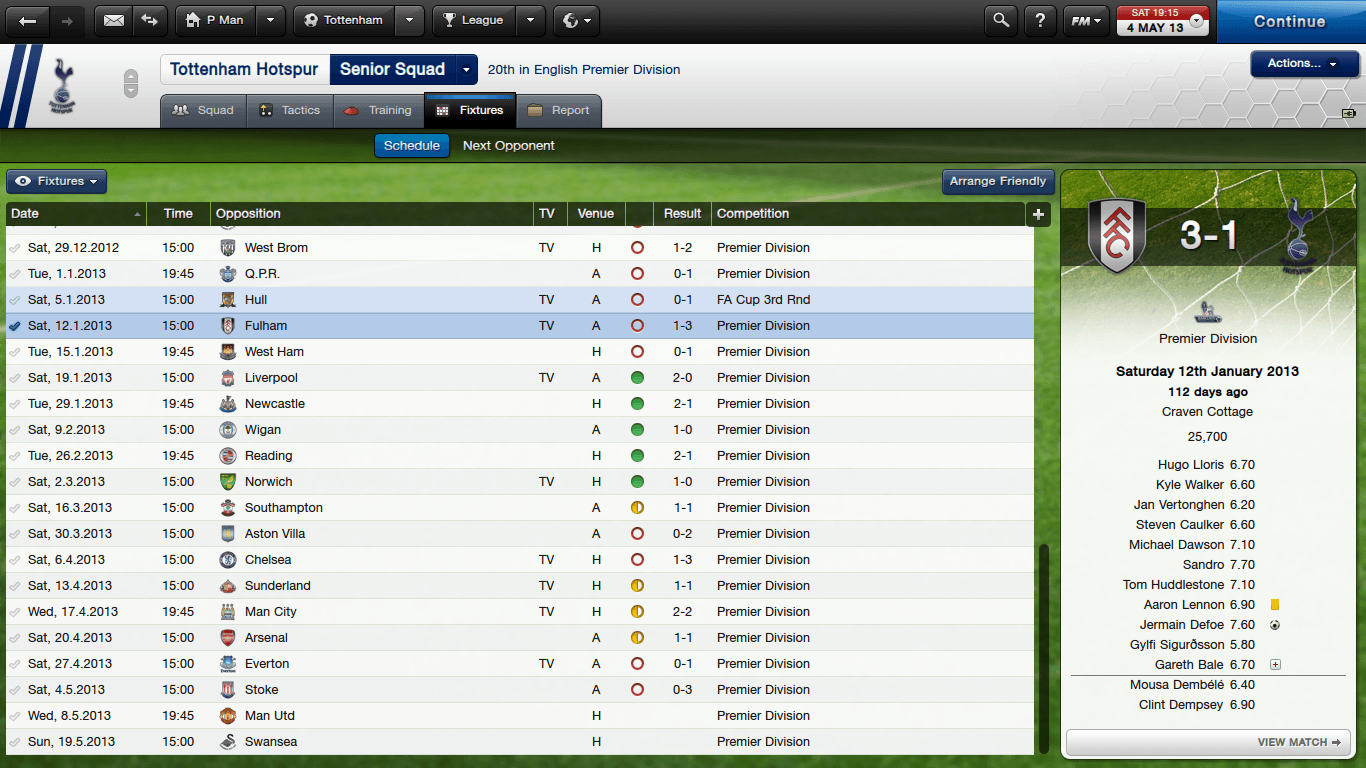 And then this happened 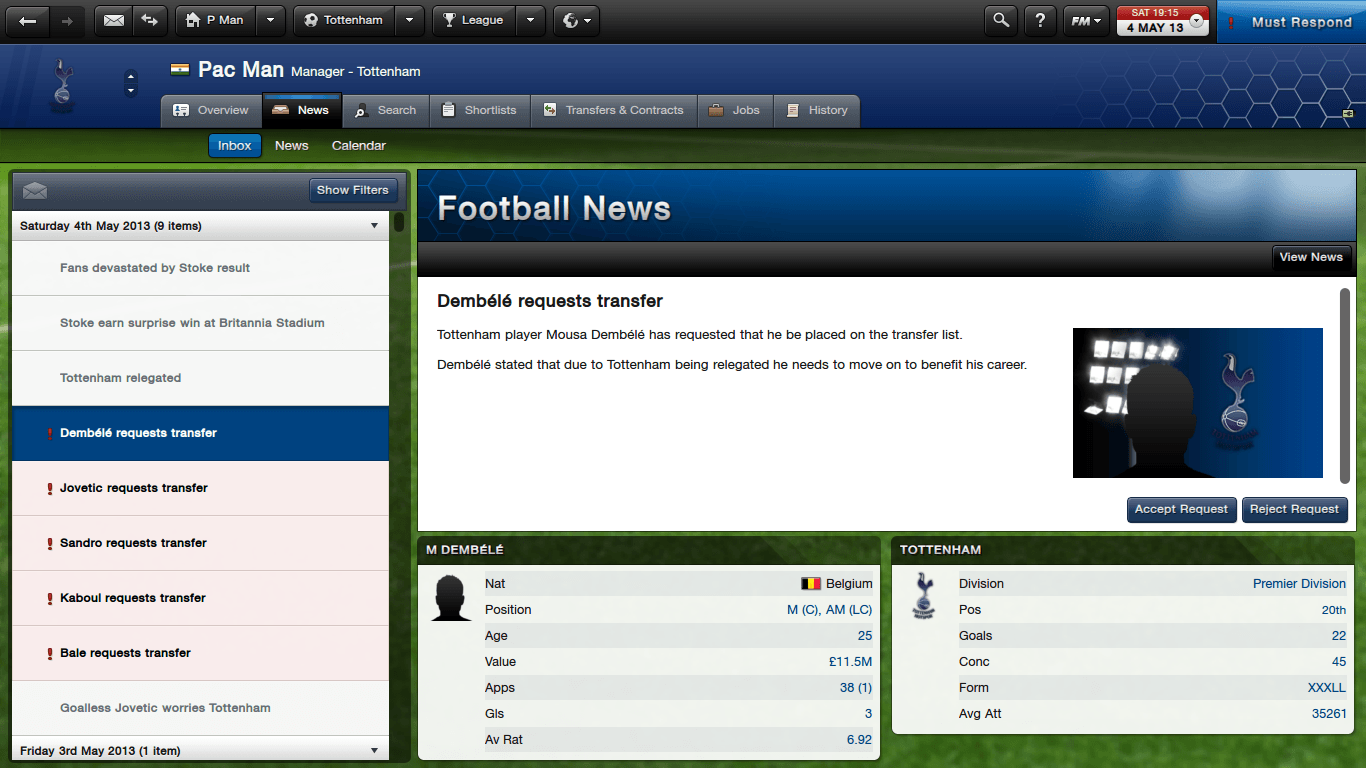 
Pac Man sat in his office, looking at the 6 transfer requests in front of him. He would have considered packing up his belongings, but he didn't have any. He looked around the room which was temporarily his office, and wondered where he would go next. He opened a bottle and munched some pills.

The door creaked open, and Daniel Levy walked in, with an inscrutable look on his face, and his hands behind his back. Man's heart skipped a beat when he saw the gleam of a blade. Levy walked in measured steps to the manager's desk, keeping his gaze fixed on the sweating manager's countenance. Without a word, he laid down a piece of paper on the desk, raised the knife high, ready to strike ... Man closed his eyes. This is the end, beautiful friend.

Levy brought his hand down, the steel making a swooshing sound. Then, with a thud, it was over. When Pac opened his eyes, he realised that not only was he still alive, but he wasn't bleeding. He had very nearly pissed himself and his heart was thumping. He wiped the sweat from his eyes and looked around. Levy was gone, but he had left the letter knifed into the desk.

Pac bent over and tore the letter free, and began to read ...
Login to Quote

Nice signings as well, I'm sure you can avoid relegation.
Login to Quote

Gurdit
7 years
neal, it's over. I got relegated.

You are reading "The Saviour Cometh - A Short Story.".