Corinthian Football Club is an English association football club formed in 1972 at Hartley, near Sevenoaks in Kent by a millionaire builder named Ron Billings, mainly to give his sons a club to play for. The club fielded an adult side which played at the Gay Dawn Farm sports complex and enjoyed a sudden short run of success in the 1980s.
The club returned to the Kent League (now the Southern Counties East League) in 2009 after a lengthy absence.


Corinthian FC was founded in 1972 by Ron Billings to provide football in a safe environment, whilst teaching the players the principles that he believed to be important in sport. The motto was simply “pro omnium beneficio”- for the benefit of all, but on the pitch the principles were simple; “Hard, but fair”. Losing wasn't considered before the game, but if the result went against them then the team were taught to take it graciously.

For the first ten years of the club's existence they welcomed such teams as Tottenham Hotspur, Charlton Athletic and Norwich City amongst other league teams as well as county and district representative sides as opposition.

On top of these games these were many regular visitors to Gay Dawn Farm from local clubs making up a fixture list of 60 games per season. During the 1980s with the arrival of an experienced football manager, Tony Sitford, they progressed from youth football into competitive men’s football playing in the Southern League, at the time a level 7 league in the English football league system. This level of football by a totally amateur club made them unique, but caused problems in the long run in attracting new players.

In their first season in the league they finished a creditable fifth, but subsequent seasons saw them slide down the table until they finished bottom and were relegated to the Kent League in 1991.

Kane
9 years
Oh my, what a lovely banner!
Login to Quote

lol, thanks for making it Kane!
Login to Quote

Odumosu: The table is looking very promising but, only first place get promotion, I'm hoping for a push from my team. Even though we were media predicted 9th in the league table I still hope for promotion since the extraordinary results. I'm very happy with my team performance.


Joey Collewijn has been an amazing player for me. Whilst being top scorer in the Kent League he is also top goal scorer the the FA Vase trophy. I will be be looking onto him to help guide Corinthian FC to promotion.
Login to Quote


Odumosu has said: For a team which were media predicted 9th and I am pleased with unexpected joy and can't wait for the next season starts. He also states that he wants to stay until Corinthian are a world-renowned team.

Joey was top goal scorer of the Kent Premier League and was one of the main reasons why Corinthian FC earned Promotion. Odumosu will be hoping to keep him for as along as time allows him to but is worried because a player of his quality could be swept away by a good team easily. 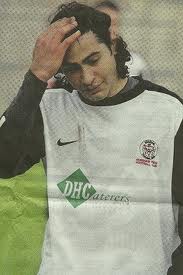 Any suggestions on how to make my post more interesting?
Login to Quote

DAVID ODUMOSU says he is determined to carve out his own glorious era in Corinthian FC’s history.


"From day one, it is my team and I have to get on and show that." Odumosu has been delighted with the players’ reaction to him and he knows he has a group with a mentality that sets them apart.

He said: “The biggest thing I've seen is the determination."

It’s incredible, it’s oozing out of them to continue winning. I see it in the training and it’s probably the biggest thing I've noticed. In training I just see winners written all over them.”

Odumosu will certainly need that intensity from the word go as the season approaches.
Login to Quote


Nile Ranger see's the Future of Corinthian FC and buys it


Nile Ranger has said he may look for a new manager to take over Corinthian FC and lead them to glory. Nile Ranger has named 3 targets as he is an Arsenal fan he has named Arsenal legends. Is this unfair to Odumosu?

I hope Nile Ranger sees the desire I have for Corinthian FC becoming successful and knows nothing will stop me from making that happen. ODUMOSU told Sky Sports
Login to Quote


"My heart belongs to Corinthian FC and my desire is to see this team win silverware," said the 25-year-old.

Odumosu added: "My commitment and drive are as strong and fresh as ever. Signing a new deal means that I can see this talented group of players reach their potential. Trust me, they are ready to deliver.

"With my staff and players we are in front of an exciting challenge and we are looking forward to achieving much success."

Odumosu talks about Nile Ranger:
"I tried very hard to show him how much I want him to stay and of course you never completely know the outcome, but my resolution and determination was always very strong to keep him - and it was never a question of money."

Corinthian chairman/owner Nile Ranger added: "We are thrilled that David has signed an extension to his contract. He has masterfully transformed this football club over 1 year and the exciting and compelling football we play under his stewardship is admired the world over.

"David is a very talented man and we believe the young, exciting team he has nurtured over the past five years will reward his and the fans' patience with silverware."
Login to Quote


Odumosu spoke on the matter of being 5th in the league table:

Again my team have shown that they are a force which can take on any league, we are media predicted 24th and in January we are 5th and promotion is still in sights if matches go our way. I'm very proud of my team and I am eager to see how this season ends.
Login to Quote


Odumosu talks about this season;

"We have to keep our ambitions high and hold on to the best players.

"The reference is there from the points tally to make it better for the future and to do that we need to hold on to our best assets.

"Today was another great moment of individual brilliance, although the squad in the second half was really, really strong and everyone was pushing for the winner."
Login to Quote

You are reading "Corinthian FC - Long Road To The Top".