and insert text in between
Login to Quote

TheFMGeek
7 years
Thanks
Login to Quote

AlexTHFC
7 years
Sorry, was afk so couldn't edit my post

Verdinho
7 years
Some excellent signings there. An attack of Griezmann Mandzukic and Vela is rather mouthwatering
Login to Quote

Thanks, I was amazed when I got Mandzukic


Real Sociedad have unveiled their 2011-12 season kits with sposnor AON. 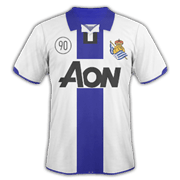 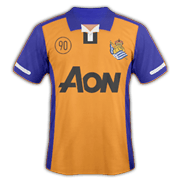 Fans have praised the beautiful new shirts, with one fan saying:

'This is the mark of a new generation. New chairman, new manager, new kits, new start.'

However, another fan replied to the comment rather aggresively:

Seni
7 years
what a beautiful kit that is!
Login to Quote

I know! I wonder who is responsible for creating such artwork!
Login to Quote

Stivo12
7 years
my apologies i had to try that blue header trick out....
Login to Quote


I walked into the studio, nervous as hell. Today was the day of the Sociedad Cup draw. Tomorrow, the first match will be played. And everyone will take their judgements. I really wasn't sure about this, but fans were optimistic about the idea. It was probably silly, getting worked up about a friendly tournament, but this would be the first tournament. A chance to get silverware. To think of the embarrassment of defeat here would sicken me. The Channel 4 presenter for the draw introduced me, and I knew it was my time.

And now, it's time to reveal the person responsible for it all, the Portugal legend who is Luis Figo!

I walked in, shaking the fear off. I smiled at the camera and waved to the audience. Taking a seat, I was asked a few questions about the tournament and why I arranged it. I answered fine, and gathered some confidence. Now just to hope I don't get left with Anji...

To draw the teams, we have footballing legend Emile Heskey!

Emile Heskey walked through and stood next to a pot with four balls. He smiled at me, and I found myself smiling back. The nerves were coming back.

I'm happy to be here and to be able to draw out the teams for the first year of this tournament, so without further ado, the first team. Real Sociedad.

My heart started racing. It would either be millionaires, Mexican champions, or a Spanish Division 2 team. I knew who I'd prefer, but I knew it was unlikely.

The next team. Anji.

We went off air. I knew they'd want to interview me, but I felt like storming out. I wanted to speak to the team. They weren't ready. Too many things to do in such little time.
Login to Quote


I could hear silence as I walked into the changing rooms, and I could tell that the squad were just as nervous as I am. They all looked up at me, wondering who would be in the team, and what the plan was.

Ok! Listen up! We'll be playing our regular 4-2-3-1 formation. The team sheets are as follows:
Goalkeeper - Claudio Bravo
Right Back - Carlos Martinez (he was still at the club at this time, and I'd made none of the signings.)
Centre Backs - Inigo Martinez and Mikel Gonzalez
Left Back - Alberto De la Bella
Centre Midfielders - Asier Illarramendi and Mikel Aranburu
Right Winger - Xabi Prieto
Attacking Midfiedler - Carlos Vela
Left Winger - Antoine Griezmann
and Striker - Joseba Llorente.
You eleven, get out on the field, I want you to relax and play how you feel comfortable. Your normal style.

I tried to stay calm, but on his way out, Llorente noticed my nerves.

Just relax. We'll do our best. Whatever happens, we have your back.

And from then on, I didn't look back. The fans applauded me as I sat in the manager's seat, and we kicked off. We played some beautiful football, and I was starting to notice who my stronger players were. Just then, Illarramendi went on the run. I cheered, nearly rising from my seat. Vela and Griezmann were there for support, but it wasn't needed as he easily scored. GOAL FOR REAL SOCIEDAD!

I jumped from my seat, punching the air. 5 minutes in, and we were 1-0 up! I was ecstatic, until my assistant had to ruin it.

I cursed him and nodded at a passing Illarramendi. We didn't score after that, but it was a triumphant victory for Real Sociedad.
Login to Quote


The players were cheering, still booming from our first victory the previous day. I walked into the changing room, and silence.

They walked out, and I followed, sitting down in my seat again. Tigres kicked off, and he atmosphere was buzzing for a friendly match. However, there was a lapse in concentration from González, and Tigres went 1-0 up in 2 minutes. I didn't know what to say.

This time my assistant was being a little more useful, but I was under fire now. If we didn't win a cup on our own soil, the fans and board would be fuming. It was our chance to win silverware, we had to take it.

Vela dove into a tackle, hacking Medrano to the floor. Medrano couldn't get up, and Vela was given a yellow card. As was Tigres player Baez after he picked a fight with him for injury Medrano. That was all the drama for the first half - now to make some changes...

The players walked into the changing room, and González looked ashamed of himself. I found myself screaming at him, but I wasn't even sure why.

If you wanna be part of the team, you have to stay focused! González out - Demidov in. Get out there.

They walked out again, but the second half would prove to be no better.

An excellent save from Bravo had led to a corner, but one player, Calderon, was left unmarked. The ball swerved onto his head and hit the back of the net to make it 2-0 Tigres. No way back...

At the first second of kick off, Sociedad looked like the stronger team. We were playing beautiful football. The ball was passed to Prieto, who tried his luck with a 25-yard strike. It hit the top corner, and I was jubilant again. We were 2-1 down, but we can wow the crowd, who were too ecstatic. Nothing else happened, and I hated that we lost, but it felt fine to me. Preparation for the new season.
Login to Quote

Nothing exciting happened in this match. We played well, but so did Enfurt. Not much else to say.

We played exceptionally well against a struggling La Vitréenne side. First of all, Barcina got a booking for injuring Vitréenne's Lefevre, before Callens got a red for a foul tackle.
However, the real action started in the second half, almost immediately grabbing a first goal through David Zurutuza, followed by Hervias in the 58th minute.

This was a result that shocked me, because when I looked at the teams, I saw some of Milan's best players! Unfortunately, it wasn't all cheers as Alberto De la Bella was injured near the start of the game. The second half, as usual, was the better half for us, with 2 Milan players (Muntari and Abate) getting yellow cards, as well as a debuting Gonul. The first goal came in the 62nd minute from Mikel Aranburu. An emphatic victory, despite only being a friendly.

Continuing our unbeaten pre-season, we dominated the game against the Italians. Atalanta picked up a red card through Favale, and a yellow through Pagliarin. We also picked up a yellow card in the first half, through previously red-carded Callens. In the 64th minute, however, David Zurutuza scored the winning goal to defeat the Serie A side.

The first match where our first half was A LOT better than our second. Rodriguez, a previously uncapped man, scored a double for us within 15 minutes to put us 2-0 up before half time, only for a 73rd minute Huesca goal to make it 2-1.

Today I found out that Celta are a nasty bunch of people, injuring Vela and Barcina and getting an 80th minute booking for another offense. Nasty people, but an easy team to dominate against. David Estrada scored the first in our traditional second-half fashion, followed by a Celta equaliser. To finish them off, Gonzalez grabbed the second in stoppage time to complete the pre-season.

A completely unbeaten season, without counting the Sociedad Cup. That's a sign of things to come this season. Only 1 player is injured going into the first game against Sporting (Barcina) but he isn't in my first team plans anyway. Onwards and upwards!
Login to Quote

You are reading "Real Sociedad - A Third Contender".