Jamesg237
8 years
A very good start to your season which is what you need if you're going to achieve those lofty ambitions! Good luck.
1
Login to Quote

Thanks. (Lofty is an understatement :O)
Login to Quote

Chester fans will be enjoying the entertainment on show in the form of goals, with 21 goals scored in 4 of their games, critics will be wondering whether or not to blame the defence or praise the strikeforce!

Also, Joey Sabin must be happy with the start he has made in his first month in charge, undefeated with 2 draws an 2 wins have rocketed his team into the promotion places. When asked about his team's performance, Sabin seemed 'a little happy' to comment about it "I'm thrilled! The team have really pulled through and have shown they are a mighty force in this league, I can't wait for my next month in charge."

Callum Tombling, a local fan of Chester, has expressed his pride in the new managers start "I'm very pleased he has shown how good his abilities are in such a short time, I'm sure in the future he will become a legend of this proud club". 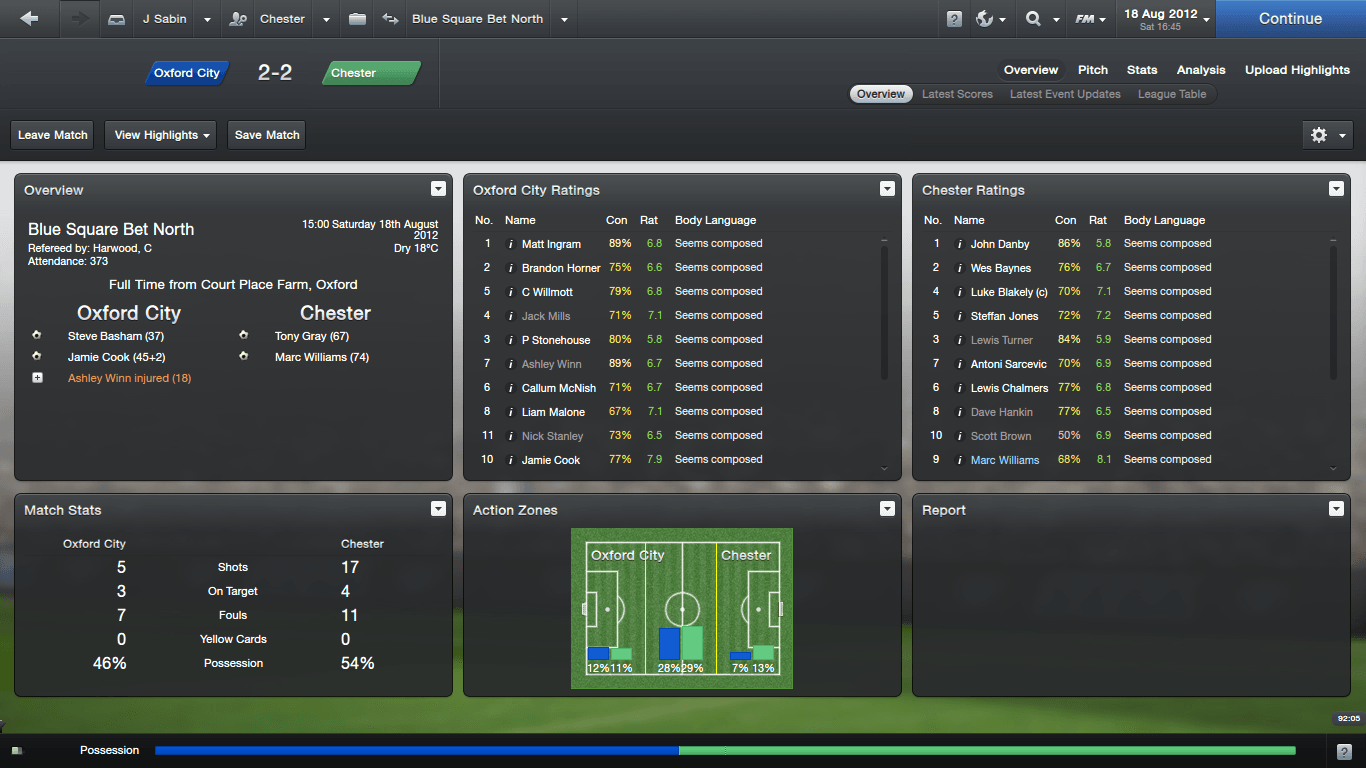 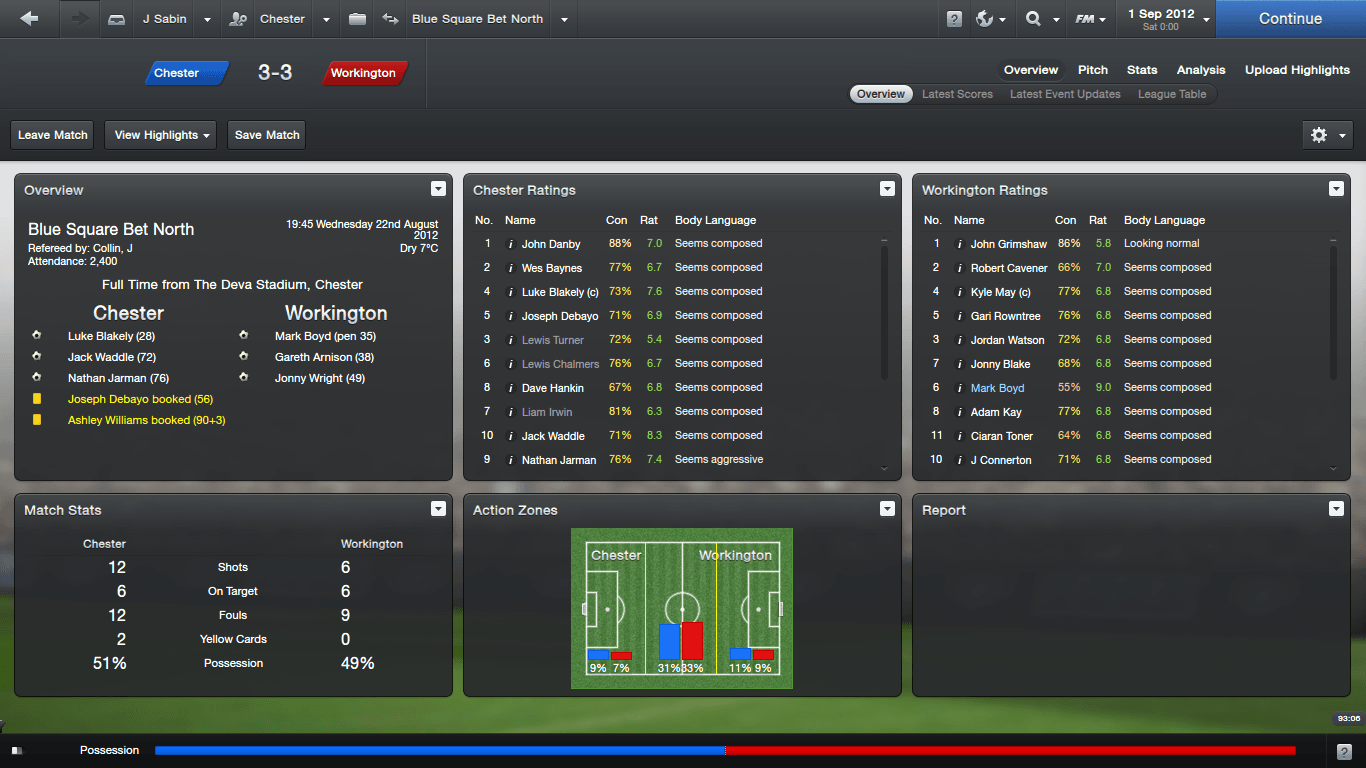 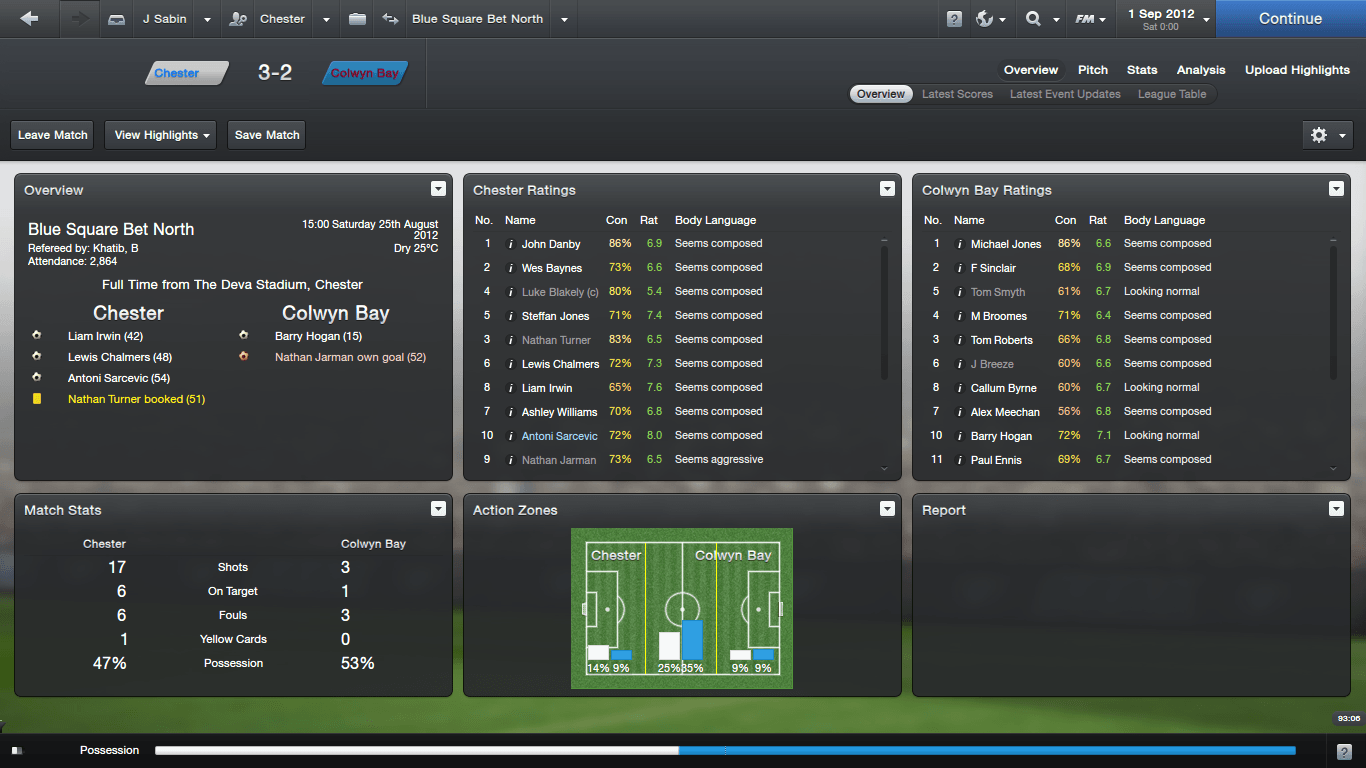 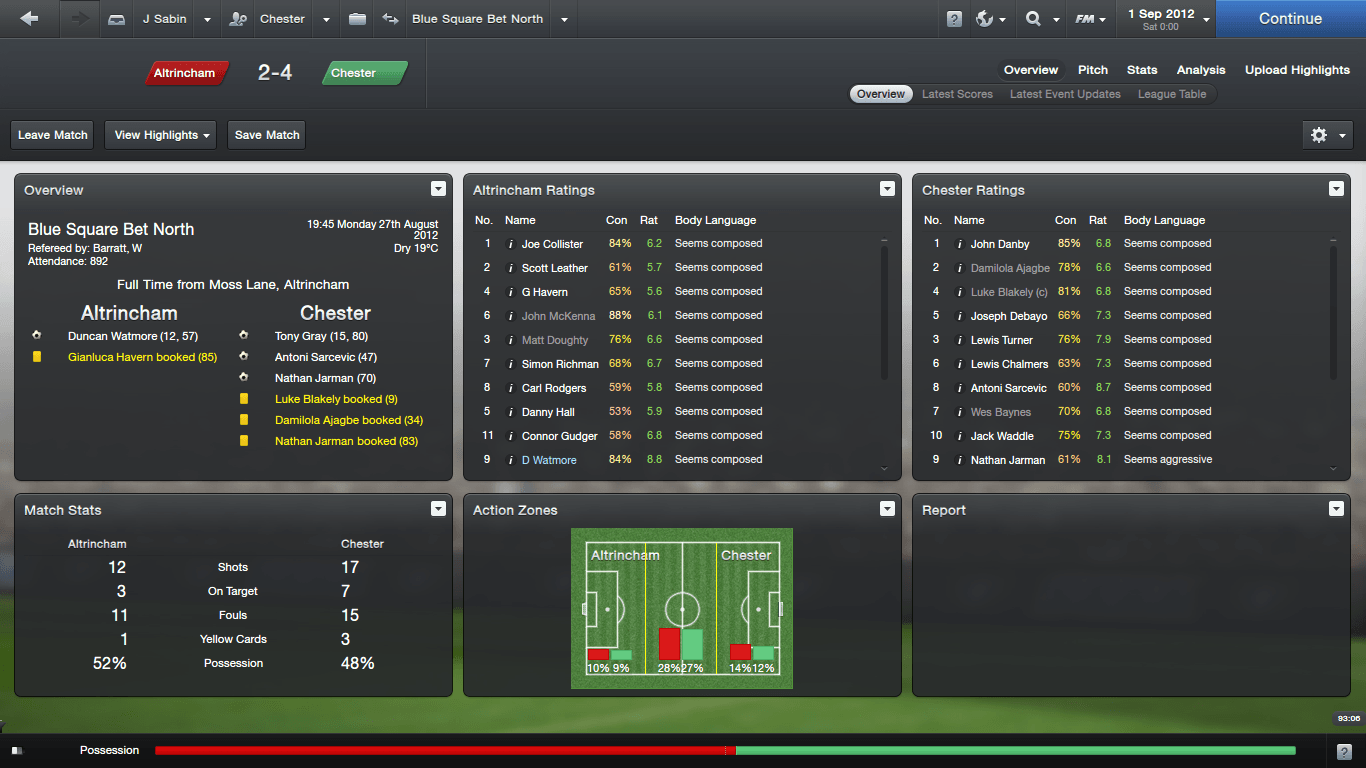 At the end of the month Chester sit 4th in the promotion places with 8 points from their first 4 games and with fans dreaming of promotion, they'll be hoping this is a window into the future. 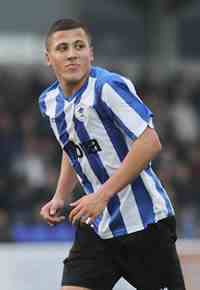 20 year old Antoni Sarcevic came runner-up in the Blue Square North Player of the Month after 2 goals in 4 appearances helped his into the promotion places. 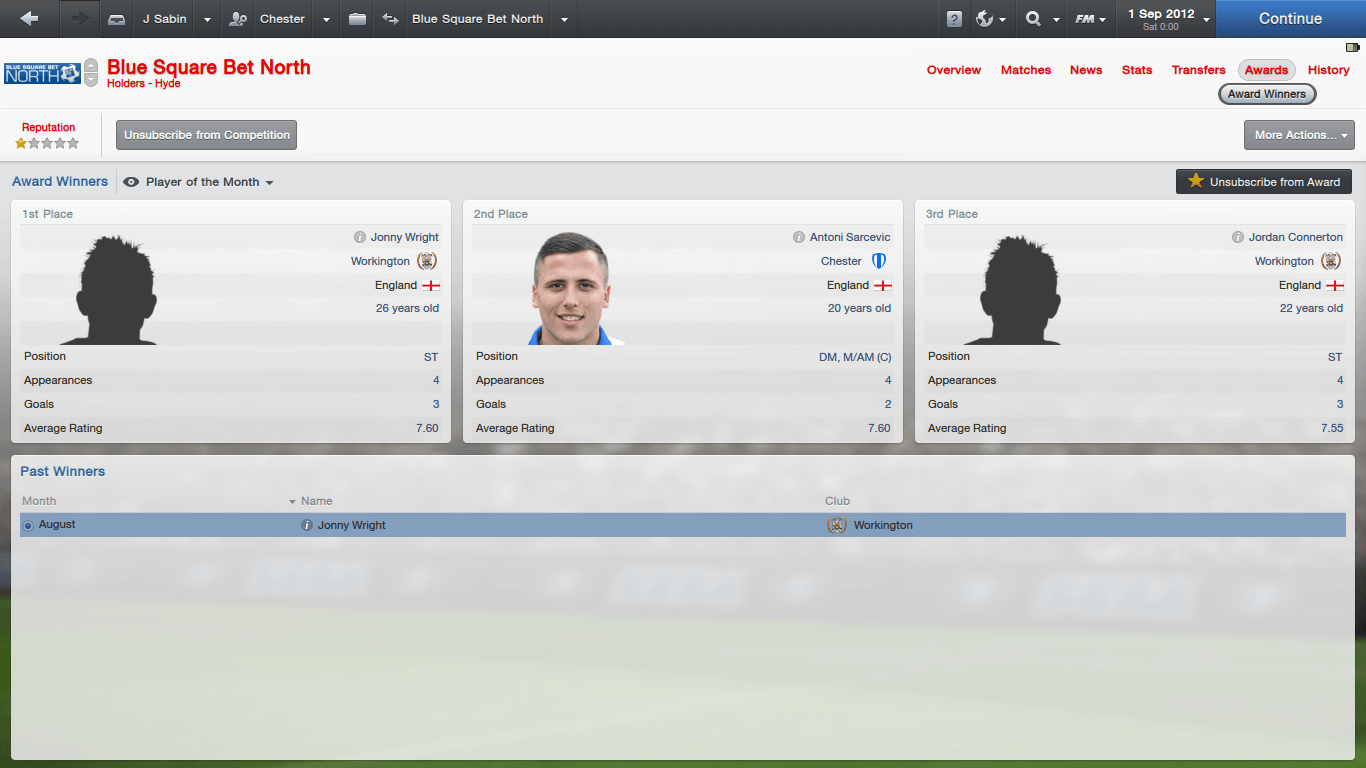 
Joey Sabin continues to re-shape his new team with 4 intakes and 7 departures and, with these influx of players joining the team, the members of the squad must be concerned about the places up for grabs. However, Sabin has assured players that a bit of friendly competition will be good for the squad and will keep them on their toes. 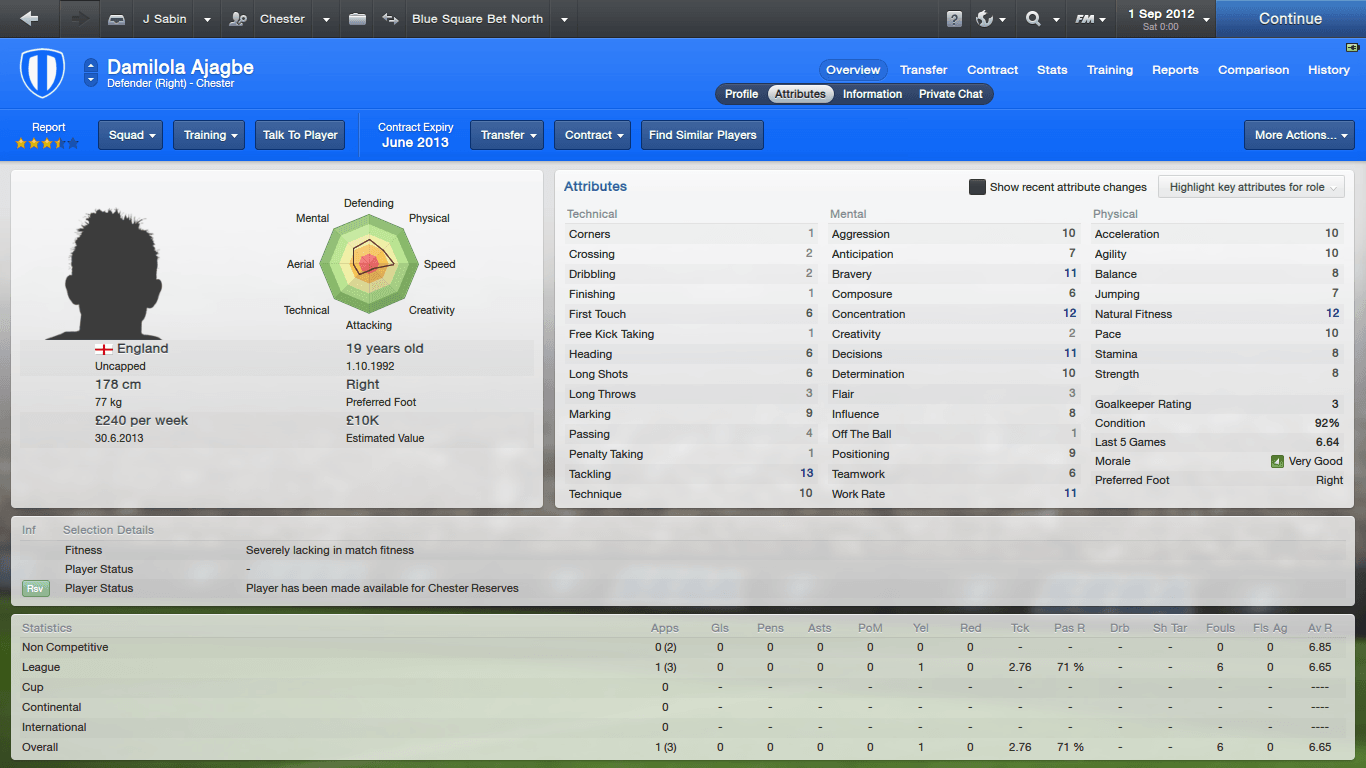 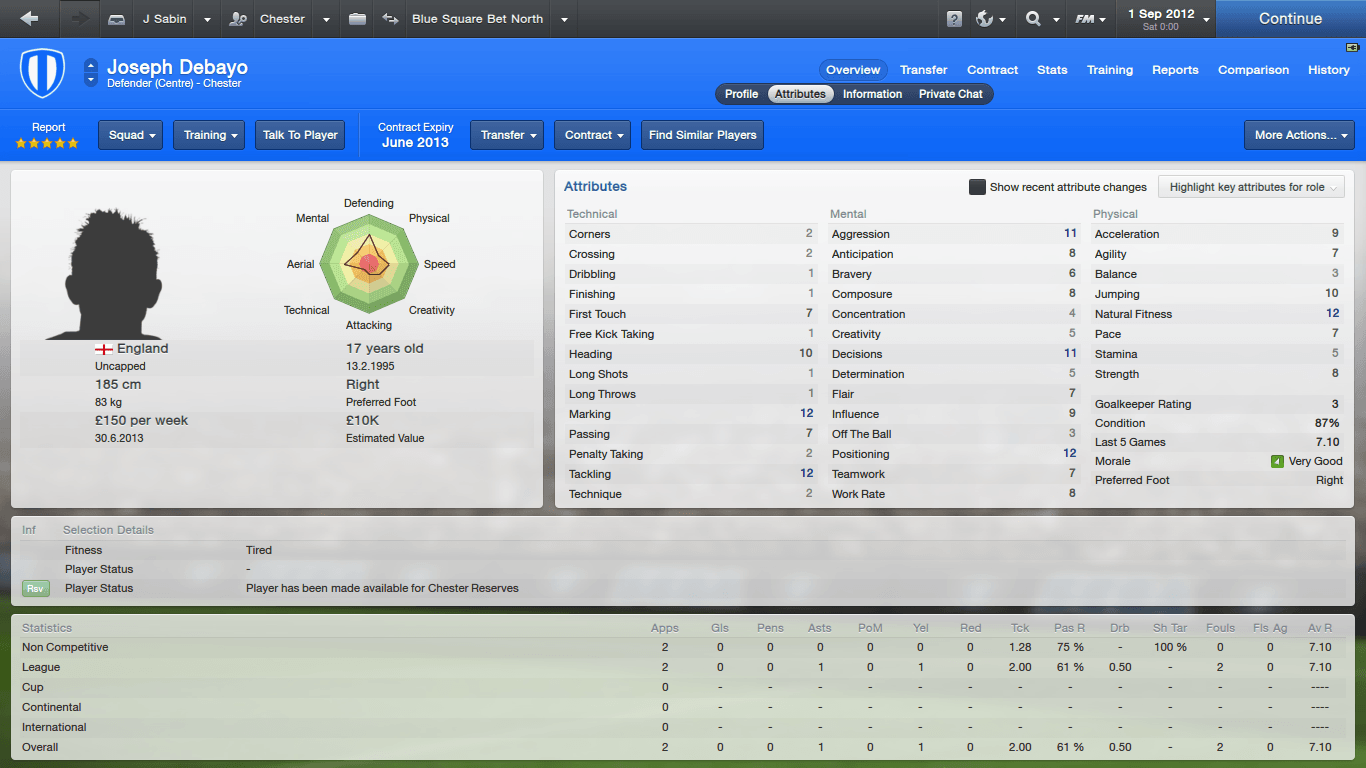 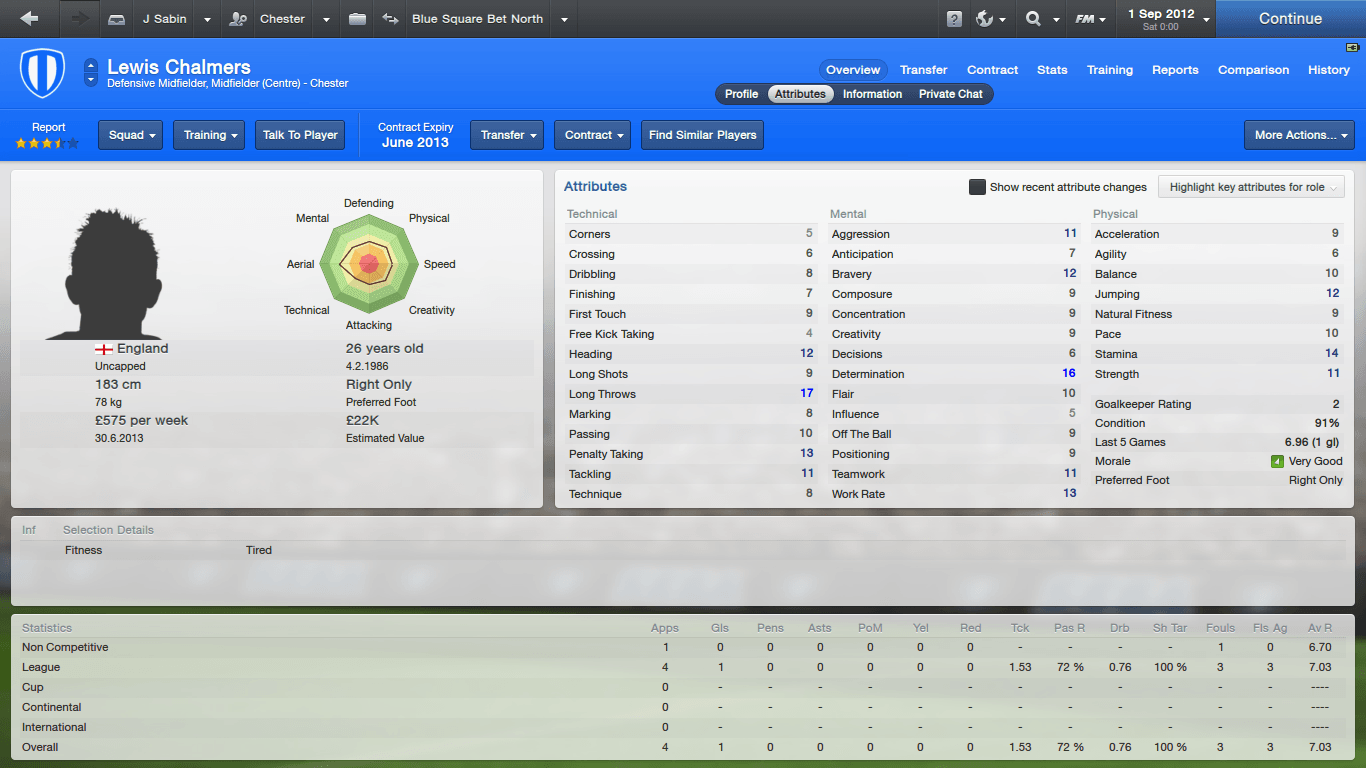 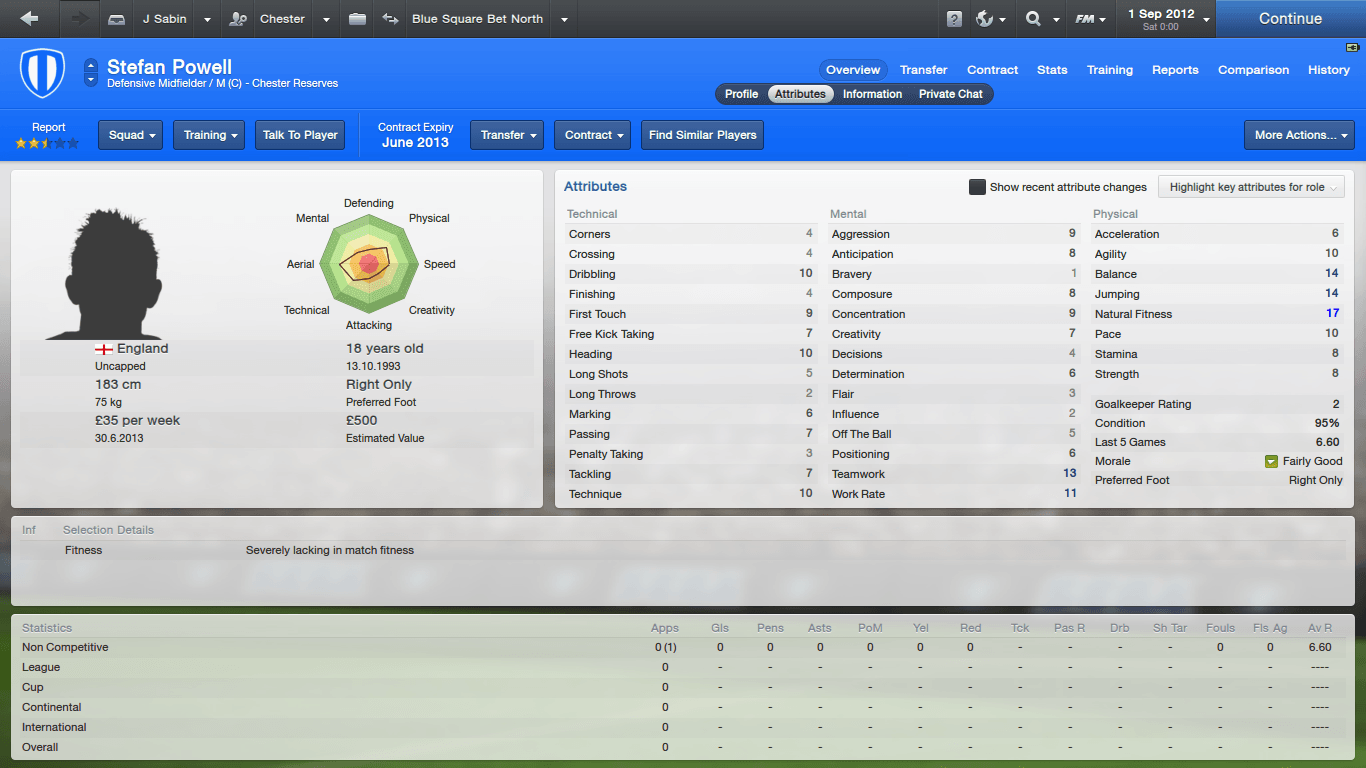 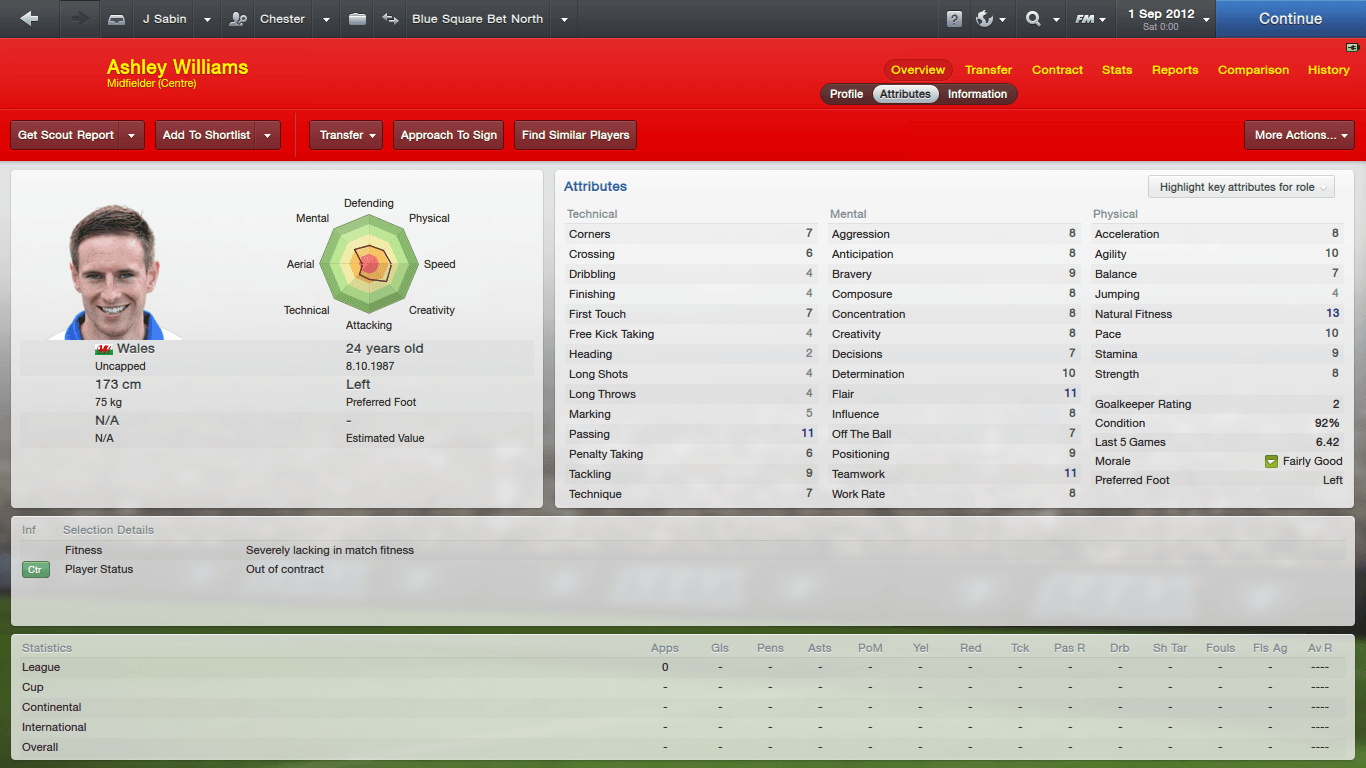 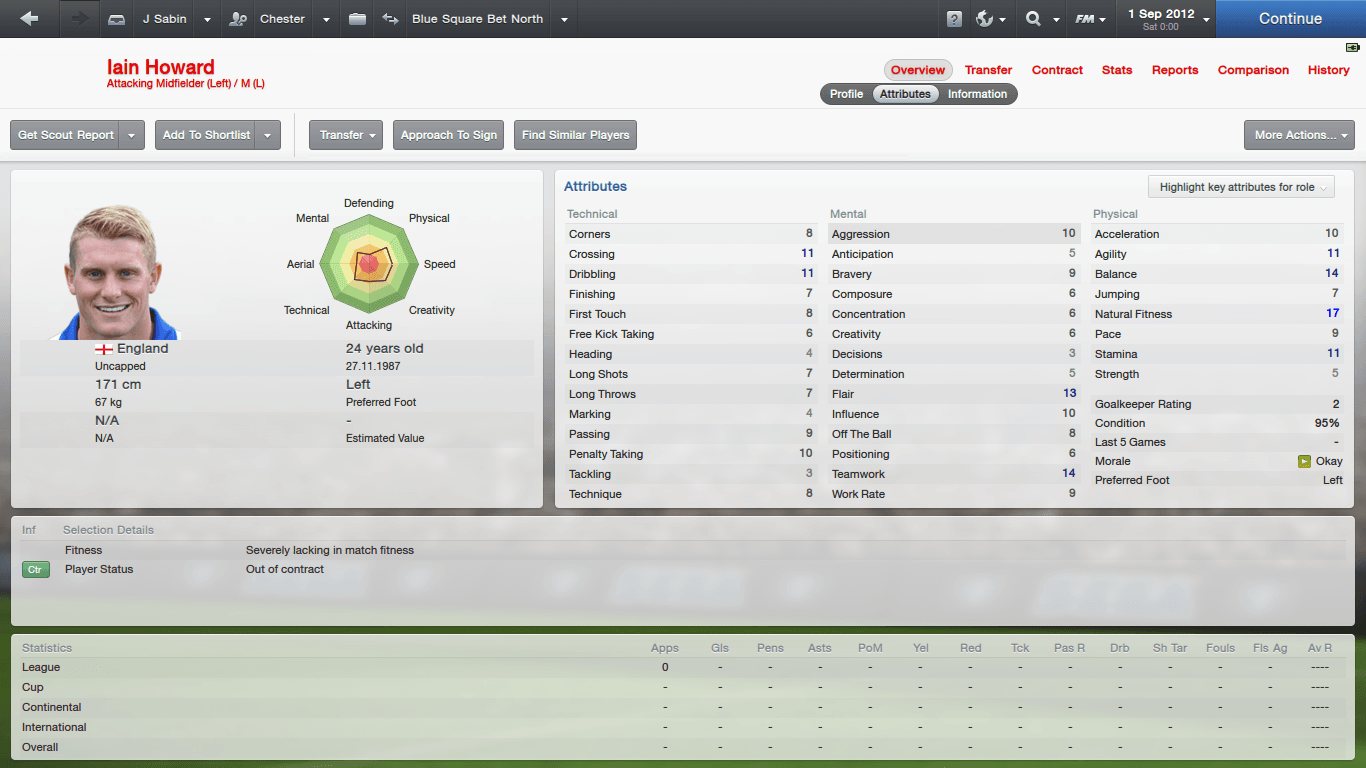 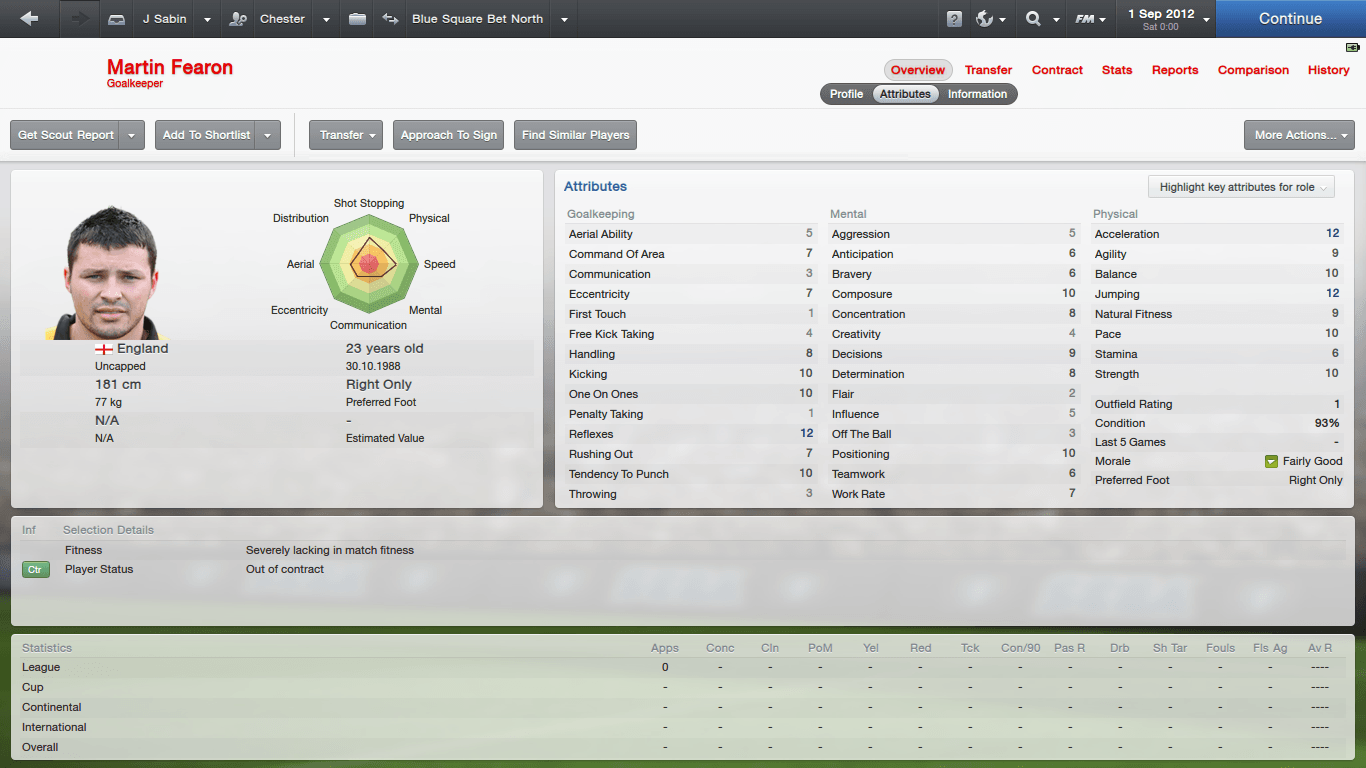 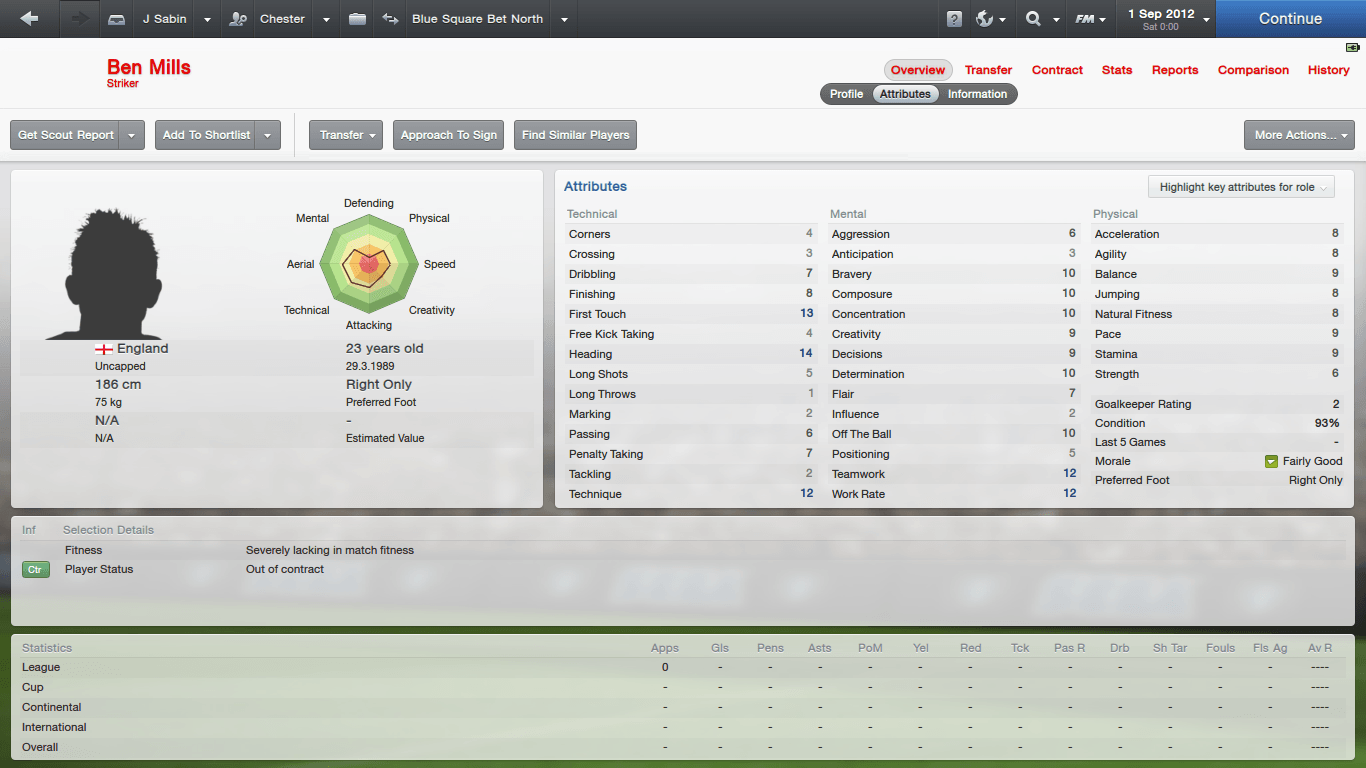 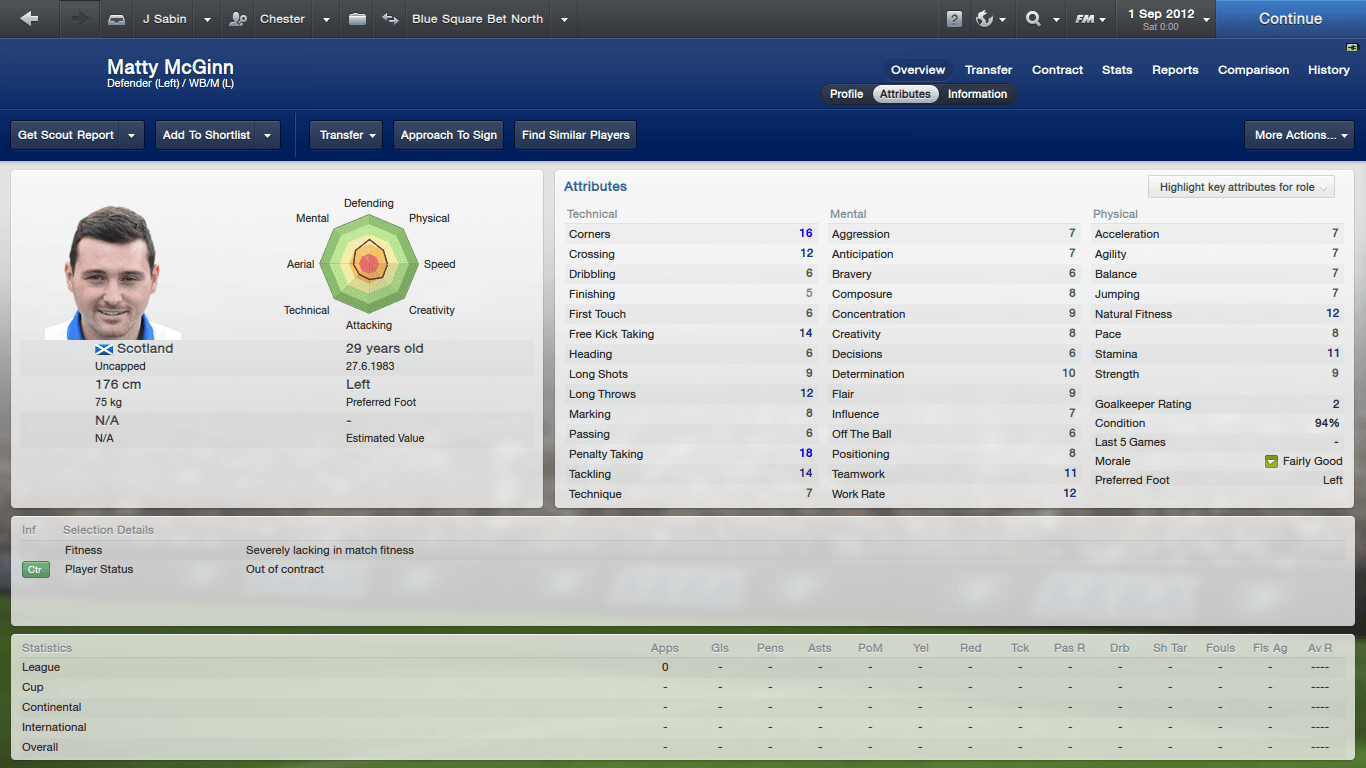 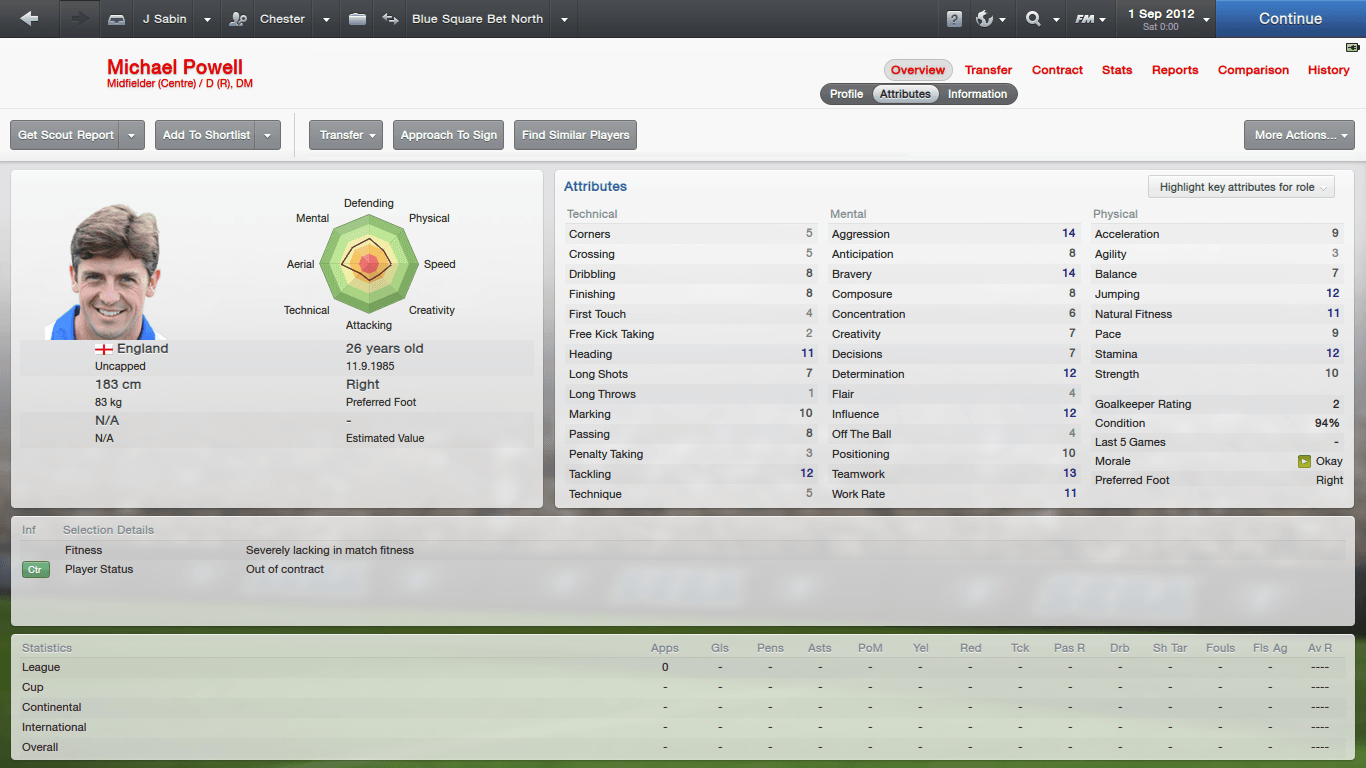 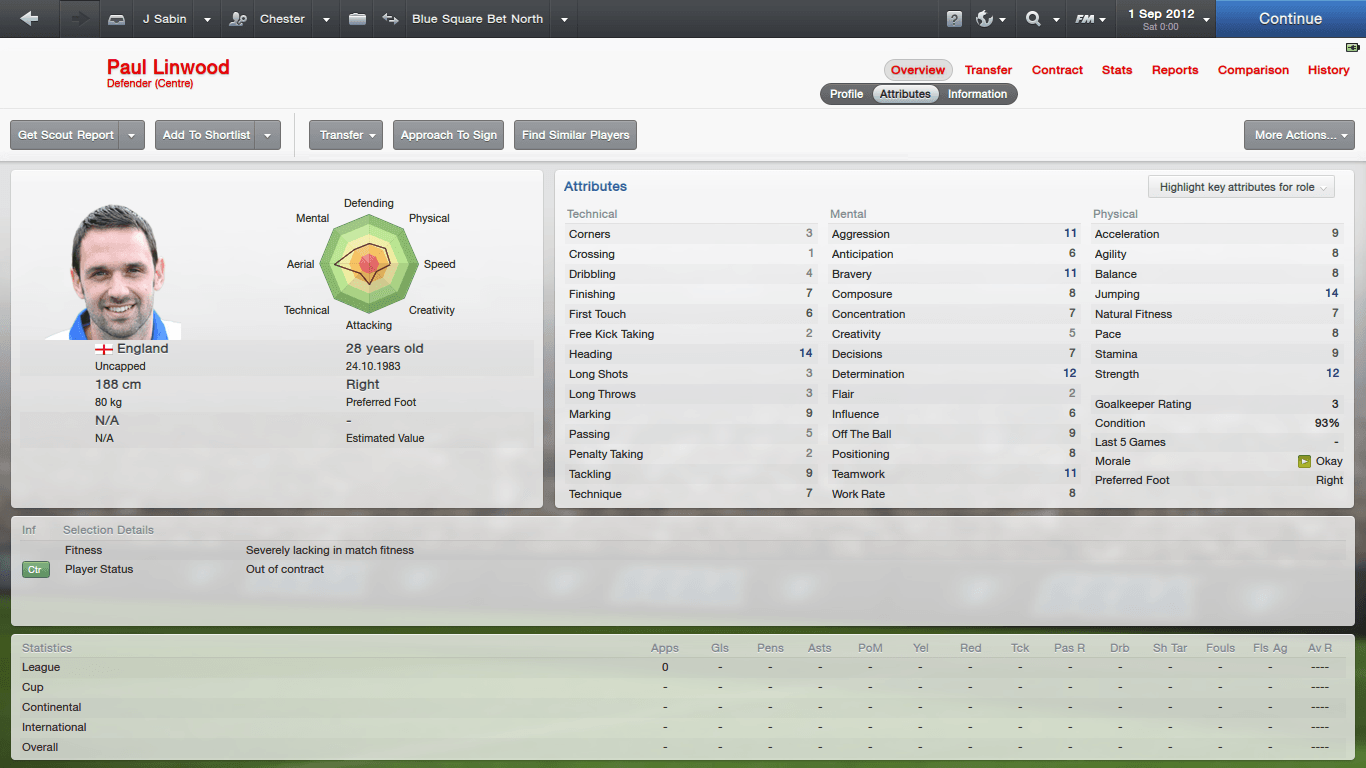 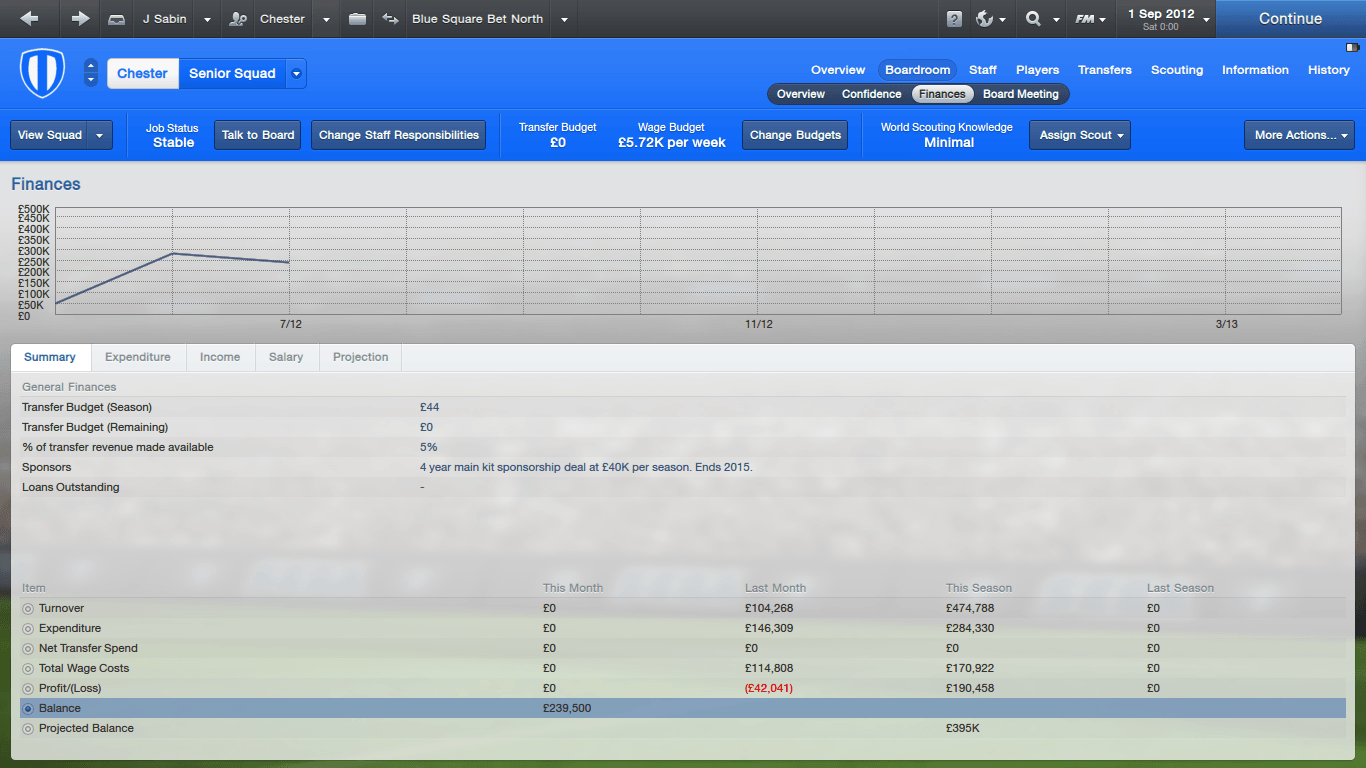 Chester's next match will be against Solihull Moors at Damson Park.
Login to Quote

squashstar12
8 years
Wow you are doing pretty well at the mo. Good luck in the future.

Hopefully I'll be able to keep up this good form, just finished my first match of September, one of my defenders scored one of the luckiest goals ever.

After pre-season wins against Mossley and The New Saints, Joey Sabin says his new squad is more than ready for the new season ahead.

Sabin told the Chester Chronicle "My team are ready for the fight for promotion, they have gelled together and know their abilities and roles, so hopefully we're in for a eventful season".

Chester's season in the Blue Square North will kick off against Oxford City at the Court Place Farm in 3 days and with fans eyeing promotion, Sabin must be feeling the pressure know.

This is looking good so far, good luck with Chester

After pre-season wins against Mossley and The New Saints, Joey Sabin says his new squad is more than ready for the new season ahead.

Sabin told the Chester Chronicle "My team are ready for the fight for promotion, they have gelled together and know their abilities and roles, so hopefully we're in for a eventful season".

Chester's season in the Blue Square North will kick off against Oxford City at the Court Place Farm in 3 days and with fans eyeing promotion, Sabin must be feeling the pressure know.

This is looking good so far, good luck with Chester

Happy Birthday for the 15th then

ANYMAN22FM
8 years
Sorry for the lack of updates, I was doing one yesterday and my computer crashed during it and I lost all of the data upto the start of September. I will do a update later today but I'm also using some of my time to create my Essex database.
Login to Quote

wellsy1498
8 years
Some nice updates recently and also good signings and a good start to the league campaign.
1
Login to Quote


I'll have an update by at least 6.00pm and thanks for the comment.
Login to Quote

The draw for the FA Cup 2nd Qualifying round was today and, with this only being Chester's third FA Cup, fans will be hoping the team will be able to channel their league performances into a positive cup result and reach their minimum expectations to go to the First Round of the FA Cup. 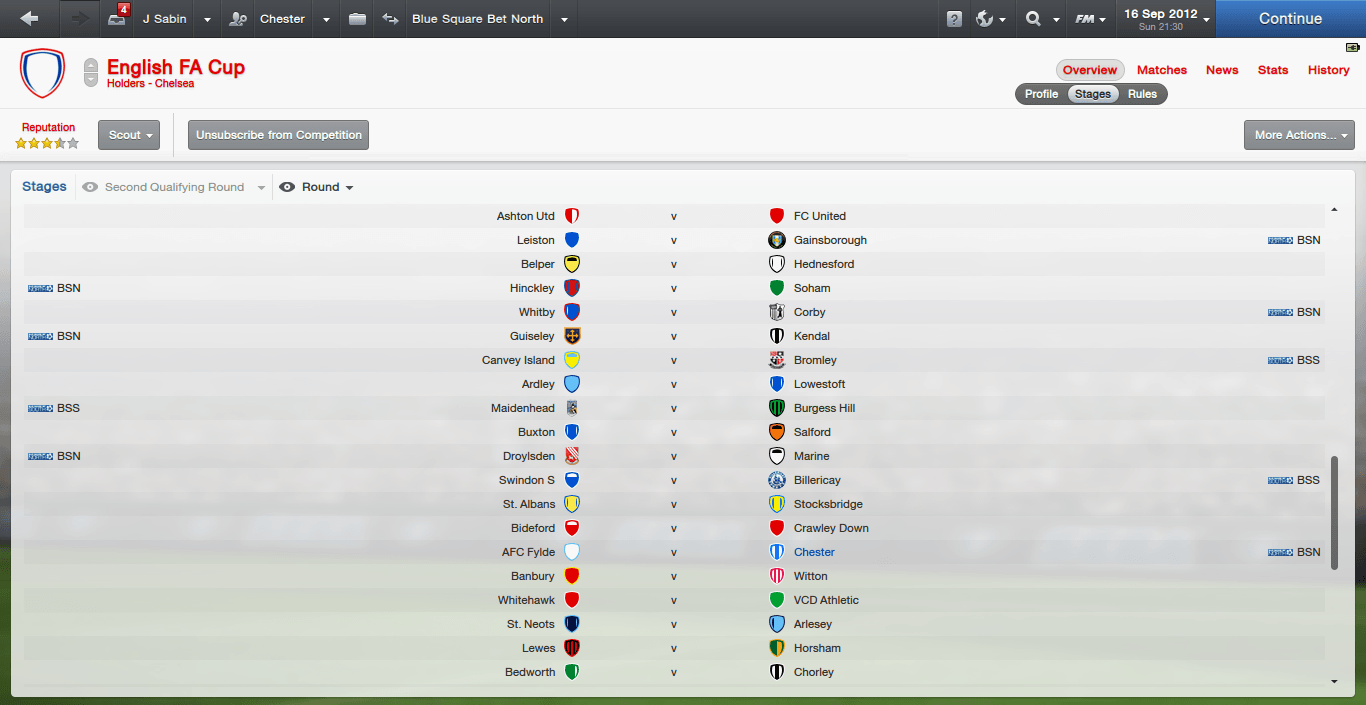 Chester have been handed a fairly easy game against NPL Premier Division side AFC Fylde. Fans of the club must be pleased with the draw as it gives Chester a better chance of advancing to the next round.

Chester Chronicle talked to Chester manager, Joey Sabin, about the cup draw. "I'm satisfied with the team we have been drawn against, although I wouldn't go about the game with complacency".

When asked about his clubs chances of progressing in the FA Cup, Sabin had this to say "well I'm not exactly expecting my players to pick up winners medals!" joked Sabin "but in all seriousness, I believe we have a good chance of reaching the first round and hopefully we can build on the experience of this competition and build for the future."
Login to Quote

Fans of Chester were on the move today as their team travelled to Kellamergh Park to take on AFC Fylde in the FA Cup 2nd Qualifying round. Expectations were high for Joey Sabin's team and with fans wanting to see goals, Sabin had to channel his pressure into a positive result.

If Chester manage to win this game they will be put into the hat for the FA Cup Third Qualifying round- which will be performed later tonight. 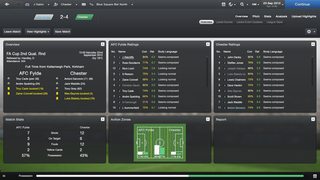 Despite controlling much of the possession, AFC Flyde's inability to create chances saw them crash out of the FA Cup after conceding defeat to Chester 4 goals to 2.

Fans reaction to the result has been mixed, with most fans being relived that their team have reached the next round.

However for dedicated fans, such as Callum Tombling, they feel as if Chester must improve their defence if they are to stand any chance of meeting the fans requirements. In an interview with Tombling, we asked for his reaction to Chester winning the cup tie "oh I'm happy with the result don't get me wrong, however I feel as if we can play to a much higher standard than that against teams of AFC Flyde's quality."


Chester are safely through to this stage of the FA Cup which means they will be in the hat to face 1 of the teams in the hat alongside them. Another draw means Chester fans are anxious about the outcome of the draw, with many hoping it will be, yet again, a weaker team. 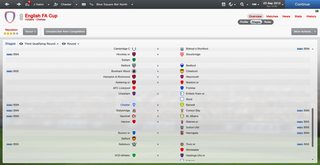 Chester have been handed another easy tie against Southern Premier Division side Barwell. Hopefully Sabin will take on board the fans criticism and bring out the teams highest performance.
Login to Quote

You are reading "Chester F.C.- Ressurection".