The month of January started with asurprise for me. Mister De Laurentiis decided that we are playing over the expectations so he will pump up our transfer budget.

We really needed to add 2-3 good players to the team, but I decidec that I will try to sign Reina on a permanent deal because his loan is going to expire in the summer.We also need a classy LM, a strong CD and another DM.

Also our scouts came back with lists of players who are in the last 6 months of contract, but I decided to sign only 2 players who has great potential.This players are:
Romario, a very promising 19 years old RB and Manuel Lanzini, 20 years old, who can become a very good backup for Hamsik. Romario will join us this month and Manuel in the summer.

In this six months I managed this club I realised that we had some young players which can becom great players, they have huge potential, those players are:

And the last transfer:

The first game of January was against AC Milan at San Siro.The game was equilibrated, but we won the game with the late goal scored by Inler from a Penalty. 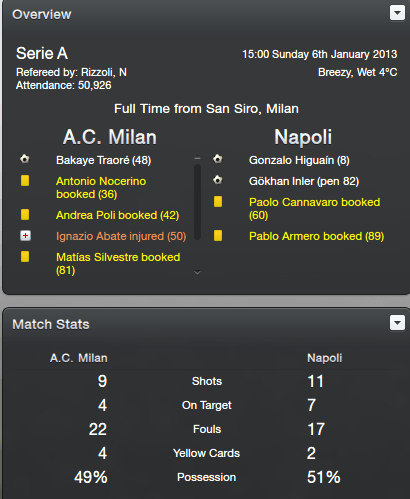 The second game was aginst Udinese in Italian cup. We dominated the game but we didn't manage to score only one goal in the first 90 minutes. We still won the game in extra time with a goal scored by Mertens. 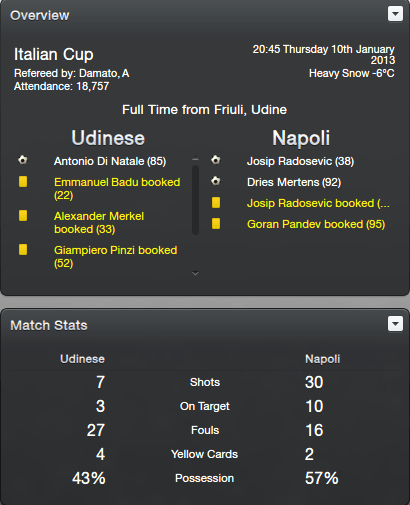 We failed to reach an agreement with Liverpool for Reina so this means to things: I will play Rafael instead of Reina and we will start looking for a Left Midfielder because Dossena will end his contract in the summer and Armero is more a Left Back then a midfielder. So after some searching we decided that I have to choose between Senad Lulic and Andre Ayew.

Third game of the month we faced Juve. We dominated them but failed to score so we lost 1-0. We felled to second place after this game. 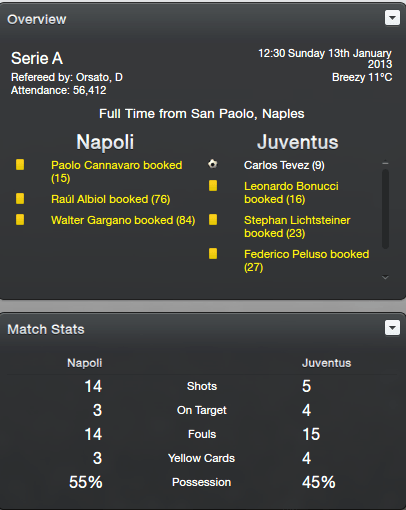 Right the day after we played Juve, we finalized our transfer, Andre Ayew - 18 mln euros. I am vey glad that now we have a world class Left Midfielder.

Next game we faced Catania, Higuain ensured our victory with a splendid double. 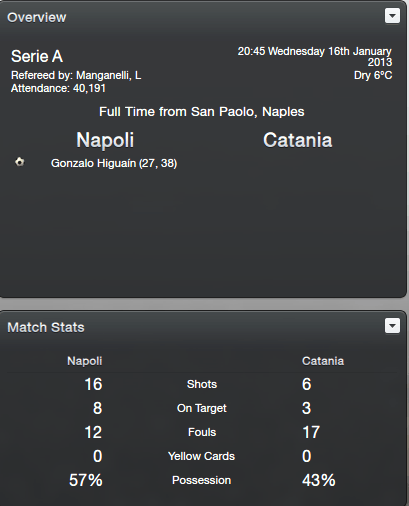 Next game we faced Cagliari, but I decided to play with te reserves because it will come the first leg of the Italian Cup Semi-finals so the players wont get tired. 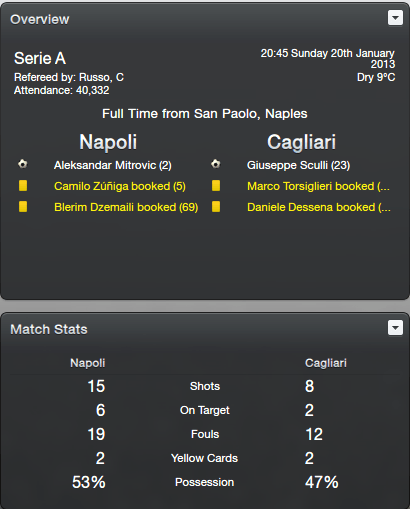 In the first leg of the semi finals we won Home against Lazio with 1 -0.Solid performance by uor players. 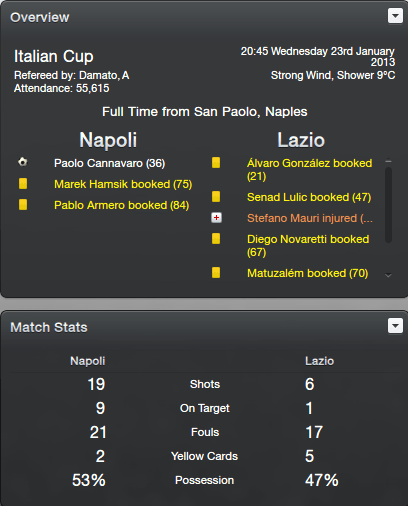 Then we faced Udinese, agains Higuain with a double! 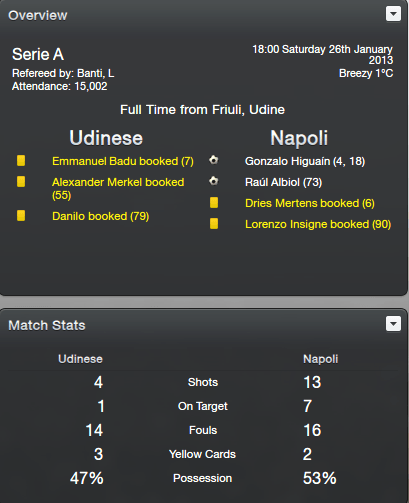 In the second leg of teh semifinals of the cup we drawed 1-1. So we qualified for the final where we will face Juventus. 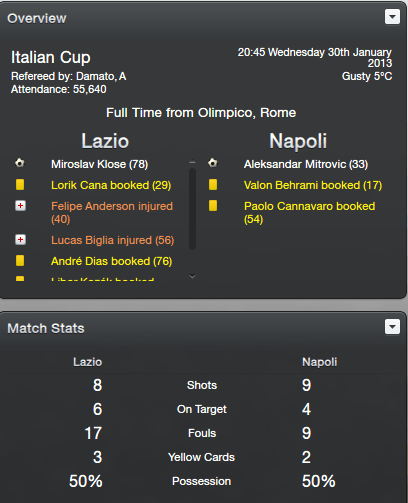 This month was very full, with 8 games played. The playeres have fitness problems now and I think this will be shown by the future performance, but I hope they will manage to recover from this!
Login to Quote

The game against Bologna was the first game for Ayew in our shirt. He scored a double and get an assist, for a debut this is asolutely perfect.
Then was teh game against Barca in Champions League. We lost the game very painfully, with a 3-0 score, it's not that I didn't expect to lose, but this score just destroyed all the morale of teh team and then we started playing bad. We made two draws with Atalanta and Lazio and won only against Sassuolo.
Then again comes Barca and beat us 3-1, again a painfull and morale destroying defeat. But luckly we managed to get oevr the result abd obtaib 3 victories and one draw in this month.

At the end of the month this is how the table looked like:

Almost perfect equality between us and Juve.

At the beginig of the month, 6 of march, AC Milan camed with a surprising offer, but I had to refuse. I started a project here at Napoli and I am not going to quit that easy, even that I love AC Milan. 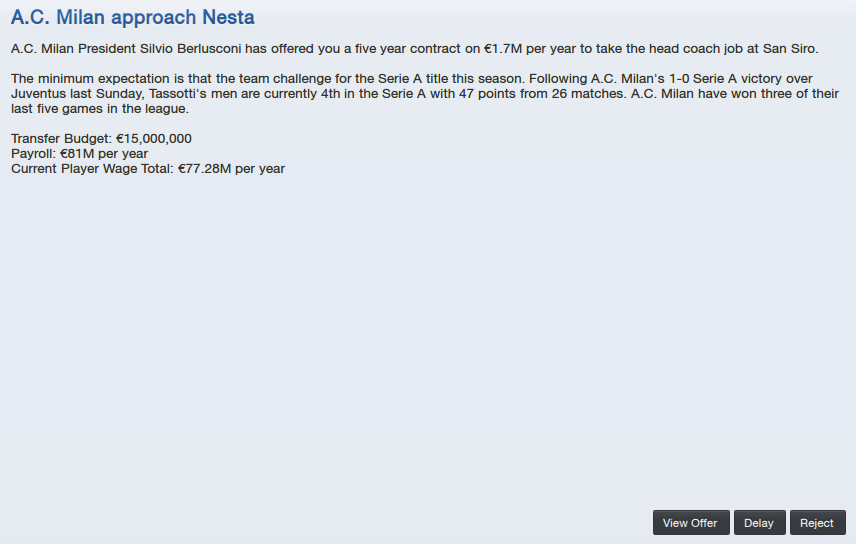 This two months our best players were Ayew, Mitrovic and Higuain. I am really glad that 2 new arrivals acomodated so quickly and start playing so good.
Login to Quote

The games we played:

The month started good we won against Fiorentina but in teh second match Rafael had a very poor performance as he had a few matches before and this month against Livorno And Roma so I started playing again with Reina. Now I think I will have to buy a new GK in the summer, maybe Rafael is to young for this pressure.

Now if we manage to get 1 point from Juve we are Champions of Italy, so I arranged a team meeting, I motivated my players strog and all the week before the game we trained our defensive positioning, because we will go there to fully defend. 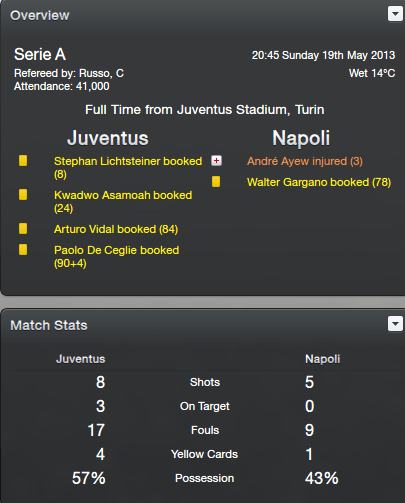 So here we are, Serie A winenrs thanks to this 3 guys who made a perfect game for us:

Then we had to play the final of the Italian Cup this time we lost 1-0, but I wasn't sad, not at all, I was glad that we made to the final, next year with some improvments to the team we can win it!

Overall it was a very good season for our team, so I was offered a new contract and I accepted without a doubt. Now I'll have to wait and see what transfer budget I will recieve and then make a plan of what I will buy. We certanly need new playears, perfectly will be if we sign a GK, a CD and a DM, but I will be satisfied if we even sign only one of these 3.

AlexTHFC
7 years
Congrats on the Serie A win!
Login to Quote

AlinAlbu
7 years
Thank you mate, next season I want to do the double!

In the date of 30 June, our fans voted their Player of the year, I wasan't surprise to find out that the winner was Davide Astori. I am glad that a player that arrived at the team that year impressed and became an idol for teh fans.

In the first of july I had a meeting with the chairman and we talked about the future of this club. I told him that my aim is to win Serie A and Italian cup this season, but I need money to strengthen the team, so he came with this offer: 64 mln euro transfer budget, League objective - Qualify for Champions League and cup objective - Winner.
In conclusion I had 64 million euros to bring the players I need for improving teh team, my main targets were: a goalkeeper,a central defender, a defensive midfielder or a central midfielder and an attackig midfielder, so in conclusion 4 players.

In 5 july we finalized our first signing, a central midfilder, Hernanes, from Lazio only for a fee of 9 mln euros because he was unhappy at the club, he said that lazio was underacheving. He will bring us a lot of experience, he knows Italian football very well so he dosen't need time for acomodation and he speaks italian.

After trying and failing to sign Handanovic and Marchetti we managed to convince Reina that he can achieve more with us then with Liverpool so he wanted to leave.We signed him on a fee of 13 mln euros. A great player, he knows our club very well because he played for loan last season for us and he also knows to speak italian.

My next target was a central defender, and my main two targets were Guillermo Burdisso and Matias Silvestre. Silvestre was the one we signed, I preffered him because he played last season in Serie A and doesen't need acomodation time, we spent 16 mln euros on him.

Our last target was an Attacking midfielder so I started searching,I found some players and I decided it will be one of these: Giacomo Bonaventura, Miralen Pjanic and Coutinho.
I decided to sign Coutinho, he was teh youngest, he is a very good player right now but he has the potential to become a world star. He has great tehnique, first touch, dribling and acceleration.We signed him on a fee of 18 mln euros.

In the meantime we also selled some players:
Andrea Dossena - end of contract
Behrami - 10 mln to PSG
Britos - 2,5 mln to Chievo
Gamberini - 2,5 mln to Lazio
Callejon - 4,2 mln to Mallorca
Dzemaili - 7,5 mln to Catania
We also loaned out 3 young players: Romario, Marilungo and Lanzini to Cesena.

After Gamberini and Britos left we had to find a new backup for our central defenders so we ended signing this player on a fee of 4 mln euros:

Overall I think we made great transfers, I hope they will confirm and help us win the league and the cup.

The first official game of the season was the SuperCup against Juventus.We played a perfect defending game controlled the game, they didn't manage to have even one shot on target. 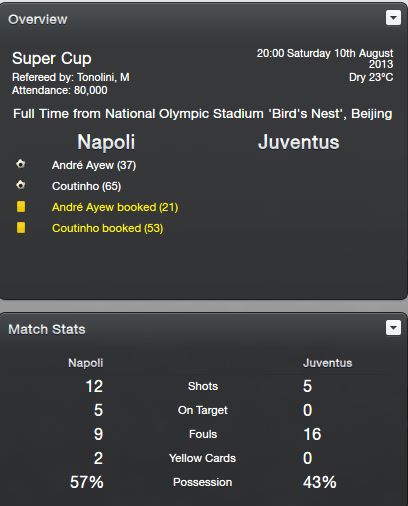 The next to games we played in Serie A, we dominated an won against AC Milan but sadly we lost against Juventus.

If last season I tought we had bad luck at the draw of Champins League groups, having to play against Bayern and At.Madrid,and managed to qualify, this season it got even worse, we have to play Real Madrid and Manchester City.How on earth can we get the second place?!

You are reading "Il Capitano is Back".