The club's franchise traces its history all the way back when the first team that was formed in 1918 by the Petrovsky factory and was called as BRIT (Brianskyi Robitnychyi Industrialnyi Tekhnikum). The team participated in the regional competition (Katerynoslav championship). With the four other teams BRIT played its games on small stadium "Sokil" which was located at the corner of Pushkin street and Yuriy Savchenko street.

Due to World War I, BRIT was disbanded, but on 9 May 1925 a new team was formed in Dnipropetrovsk (coincidently, later the day became to be known as the Victory Day). The team participated under a generic name as football team of Petrovsky factory. The official name it received in 1926 when it became to be known as "Petrovets". The team entered the first Soviet competition under the name of Stal (steel, En) in 1936 in one of the lower divisions. The team participated in the three championship before World War II. After the war, in 1947, the team reentered the Soviet competition and was merged with another club from Dnipropetrovsk, Dynamo Dnipropetrovsk. From 1949 until 1961, the team was called Metalurh (from English metal worker). During this time the team participated for three seasons, 1950–1952, among the amateurs due to poor results. In 1954, Metalurh Dnipropetrovsk reached the semi-finals of the USSR Cup, where it lost to Spartak Yerevan.

In 1973 and 1976 Dnepr reached the semi-finals of the USSR Cup competition. In 1978 the team was relegated to the lower league for two years. Their next return to the top flight was not as inviting as their first one and the team languished at the bottom of the table for several years. In the following years, the governing body of the team hired new promising coaches – Volodymyr Yemets and Hennadiy Zhizdik. After those changes, Dnepr became a strong contender for the Soviet championship winning it twice: once with Yemets and Zhizdik in 1983, and another one with Yevhen Kucherevsky in 1988. Also, in 1989 Dnepr became the first professional football club in the Soviet Union. During those years, the team featured many notable players such as Oleg Protasov, Hennadiy Litovchenko, Oleksiy Cherednyk, and Oleh Taran.

Following the collapse of the Soviet Union, the club took on the Ukrainian version name of Dnipro, the name of the biggest river and one of the major symbols of Ukraine. The club joined the football federation of the native country and remained one of the top contenders in the newly formed Ukrainian Premier League. The team received silver medals in 1993 as well as the bronze in 1992, 1995, 1996, 2001, 2004. The team also reached the Ukrainian Cup finals in 1995, 1997 and 2004, but lost all three to Shakhtar Donetsk.

FC Dnipro is currently controlled by the Privat Group.

There exist a friendship between supporters of Dnipro and Dynamo Kyiv.
Login to Quote

I can't take credit for the opening post. I just used the information on their wikipedia page. Thanks though.
Login to Quote

Haha, I have. It's been a while since I was last active, surprised anyone remembers me!
Login to Quote FC Dnipro have parted ways with Spanish manager Juande Ramos after 2 years at the club. Ramos, 57, is considered to be a manager with high credentials and one of the best, on paper, to ever manage the Dnipropetrovsk club. After failing to win a single title in his reign at the club FC Dnipro decided it was time to move on and find someone else who could take the club forward.

FC Dnipro are reportedly looking at the most sought after young managers in world football. A few names have been thrown up but the club have not confirmed their interest in any of the young managers. A highly popular name with the fans is that of Ole Gunnar Solskjær who manages Norwegian side Molde FK. The "Baby-faced Assassin" led his hometown club to back-to-back title wins in his first and second years in senior management.

A name that has been bounded around is Viktor Goncharenko the current manager of BATE Borisov. He's just 35 years old but has been in management for 5 years already, all with BATE. He is the youngest ever manager to lead a team in the final group stage of the UEFA Champions League. He set this record in a match against Real Madrid, at the age of 31. He has won an abundance of domestic titles with the Belarusian giants. He has won the Belarusian Premier League in 2008, 2009, 2010, and 2012 aswell as adding the Super Cup twice and the domestic cup once.

One of the most obscure managers linked to FC Dnipro is Bournemouth manager Eddie Howe. The 34 year old Englishman has managed two clubs Bournemouth and Burnley. He started out as manager of Bournemouth when they were languishing in the bottom division of the football league in 2008. The following season he took Bournemouth to the runners-up spot in League Two gaining promotion to League One where he had Bournemouth almost instantly fighting for promotion to the Championship. It was then he was approached in January of that season to take over at Burnley, which despite pledging his loyalty to Bournemouth, he did just two days later. He spent a year and a half at the Lancashire club before re-joining Bournemouth for the season ahead. Despite only returning to the club within the last month he could be tempted away with a good wage and decent budget.

Solskjær distances himself from Dnipro job 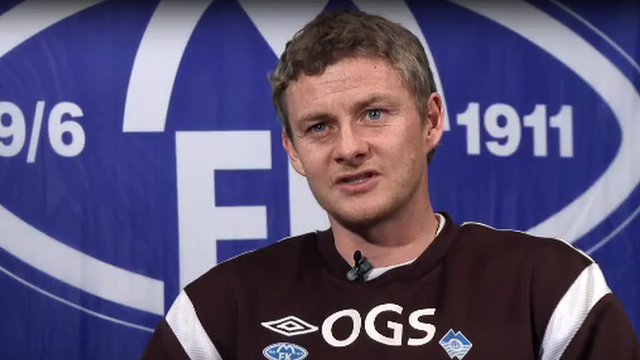 Ole Gunnar Solskjær has distanced himself from the FC Dnipro job today in an official Molde FK press conference. The Norwegian champions called a press conference earlier today. Many Molde fans feared the worse that the club would be announcing that Solskjær was to leave the club and join up with FC Dnipro. They were not left waiting for long as within minutes as Molde FK chairman Øystein Neerland announced the clubs back-to-back championship winning manager was to remain with the club for at least another season.

Solskjær himself spoke with the media and revealed he was flattered by the interest of one of the top Ukrainian sides but was very happy developing as a manager in Molde and was not looking to move yet. He still has milestones he wishes to reach while at Molde FK.

FC Dnipro released a statement not long after distancing themselves from Solskjær. The statement outlined how they had made not official approach and did not contact Molde over the availability of their highly acclaimed manager. FC Dnipro did admit that he was one of many possible candidates that the club are looking into.
Login to Quote

Ukrainian second division side Sevastopol's manager Aleh Konanaw is one of the many candidates linked to the managerial vacancy at FC Dnipro. The young Russian coach has only been with Sevastopol for a few months when he joined them from Ukrainian Premier League side Karpaty Lviv. He has yet to win a single honour in his managerial career which has spanned 5 years. Despite this he is still seen as a manager with a lot of potential. His Sevastopol side are favourites to win promotion to the UPL as Champions.

FC Dnipro have kept quite on who they are tracking to take over from Juande Ramos. They so far have only confirmed interest in Ole Gunnar Solskjær after the Norwegian manager expressed his desire to remain at his current club Molde FK.
Login to Quote

Toon
8 years
Will be interesting to compare this with my Ukraine league story.
Login to Quote

You will more than likely do a lot better. The only time I have really succeeded in the Ukraine is with Shakthar. I failed with Metularg Donetsk and Metalist Kharkiv to break the top two dominance and gave in.

Thanks! I'm following yours too.
Login to Quote

You are reading "FC Dnipro Dnipropetrovsk".