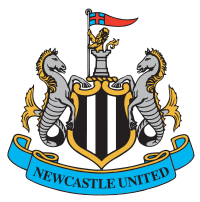 Newcastle United Football Club (often abbreviated to NUFC) is an English professional association football club based in Newcastle upon Tyne. The club was founded in 1892, by the merger of Newcastle East End and Newcastle West End, and has played at its current home ground, St James' Park, since. The ground was developed into an all-seater stadium in the mid-1990s and now has a capacity of 52,404. The club has been a member of the Premier League for all but two years of the competition's history, and never dropped below the English football's second tier, since joining the Football League in 1893. In 2007, long term chairman and owner Sir John Hall sold his share in the club to Mike Ashley.
They have won four League Championship titles and six FA Cups, as well as the 1969 Inter-Cities Fairs Cup and the 2006 UEFA Intertoto Cup. Newcastle United has the ninth highest total of major honours won by an English club.[2] The club's most successful period was between 1904 and 1910, when they won an FA Cup and three of their First Division titles.
They have a fierce local rivalry with Sunderland, and the two clubs have engaged in the Tyne–Wear derby since 1898. The club's traditional kit colours are black and white striped shirts, black shorts and black socks. Their traditional crest takes elements of the city coat of arms which features two seahorses


we enjoyed a pretty good pre-season against some top quality sides. im most pleased with our draws against Italian giants Juventus and Inter milan. whilst also giving big spenders PSG a run for there money. there were 6 other friendlies played over the course of the month but none of them really notable.

things have been pretty quite for Newcastle United on the transfer front with only two players joining the club. most notably Toby Alderweirald who joined with from dutch giants Ajax Amsterdam with only hours remaining on deadline day. Josh Vela also joined the club from Bolton wanderers

This season will see us embark on our Europa League journey. in order to Qualify we had to get past Helsingborg first. and we doen so with a 3-0 victory over the two legs

heres our group for the Europa League,

we havnt been given the easiest of groups and i think it will be a fight with Olympique Lyonnais to see who finishes the group in first place.


sorry about such a brief update. just had a bit of catching up to do .
next update coming soon
Login to Quote

Arvind
7 years
Newcastle are a great club to manage, good luck with them! Are you planning to keep Demba Ba or let him go? If you are selling him, I suggest you first offer him a new contract(55k a week max) to get rid of the 7m release clause, and then sell him. You should be able to get 25m.
Login to Quote

thanks for your comment hope you keep following
Login to Quote

what January update did you download?
Login to Quote

You are reading "living the dream on Tyneside".