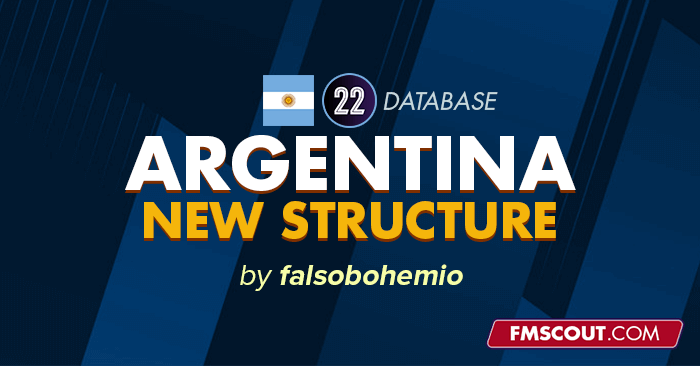 The season starts in 2021 and runs from August to May like the previous one, but there are no more hand-picked relegations. The First Division will have the 26 teams it has today, but they will face each other in a single round-robin and there will be TEN direct relegations. From 2021 onwards, it will be the way Argentine soccer should be. 20 teams, 38 dates, 4 direct relegations, similar to what is done in Brazil.

The Primera Nacional is the most innovative of all, it has 35 teams (the same as today) of which they face each other in 34 dates in a single round. Four are promoted directly to Primera, while the last THIRTEEN are relegated directly. The next eight play a head-to-head match on a neutral field to see who stays and who goes. From 2021 onwards, the format has 32 teams in two groups, where the champions of each group are promoted to Primera while the second to the fifth go to the reduced playoffs for the third and fourth promotion. Two teams are relegated per group while four from each zone will play a play-out for four more relegations.

The third category is the great novelty as it incorporates the Federal Tournaments, four geographical tournaments with two promotions each to the First National Division. The fourth, fifth and sixth divisions remain the same as the previous structure. The Federals are Buenos Aires (Buenos Aires plus Metro), Santa Fe-Córdoba (Center), Cuyo and Patagonia (those same regions) and North (NOA, NEA and Mesopotamia).

In the fifth, the regionalized competitions begin. There are 8 national competitions that make up the category and its name is Regional Tournament. The regions are: Buenos Aires (all the Province of Buenos Aires except AMBA), Metropolitan (AMBA), Patagonia (Tierra del Fuego, Santa Cruz, Chubut, Neuquén, Río Negro and La Pampa), Cuyo (Mendoza, San Juan and San Luis), Mesopotamia (Misiones, Corrientes and Entre Ríos), Central (Santa Fe and Córdoba), NEA (Formosa, Chaco and Santiago del Estero) and NOA (Jujuy, Salta, Tucumán, La Rioja and Catamarca). Each one has a different format explained here

The sixth division belongs to the Provincial Tournaments, where there is one per Province, except for Buenos Aires, which has two (Buenos Aires North and Buenos Aires South), in addition to the one corresponding to the AMBA. Tierra del Fuego and Santa Cruz are united in a single Provincial: the Austral, just as La Rioja and Catamarca are together in the category. In Tierra del Fuego I have created Deportivo Chileno, a team owned by a tycoon from Punta Arenas that seeks to conquer Argentine soccer.