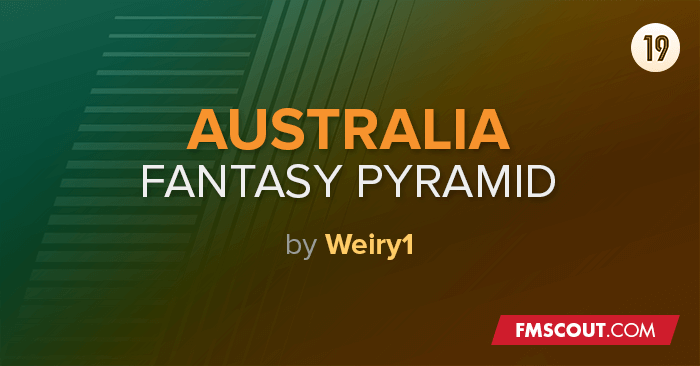 An alternate reality, the year is 2019 and following the decline of Rugby League and Australian Rules Football at grassroots level as well as on the professional stage the Football Federation of Australia (FFA) have adopted a "European" type system which includes:

No salary cap,
A nationwide cup that actually means something (winner qualifies for Asian Champions League)
A fully professional second division,
A semi-professional nationwide third division
and most exciting of all Promotion and Relegation from the top tier of Australia all the way down to the bottom fourteenth tier.
File contains 126 Leagues to play in and 1580 real life Australian clubs to choose from.

A-League clubs get 5 million AUD at the start of every season while B-League sides get 2.5 million. Money is scaled down to the NPL and SPLs and below that there is no TV Money.

A-League has the current 12 real life teams as well as new franchises in Canberra and Tasmania.
B-League has new franchise in Darwin, NZ powerhouse Auckland City, Former A-League side North QLD Fury as well as teams from Cairns, Wollongong, Sutherland, Fremantle, Ipswich, Brisbane, Adelaide, South Melbourne, Dandenong, Gold Coast and Sunshine Coast,
NPL has 2 teams from each of the 9 states/federations.

Please note: We haven’t touched the playing squads yet so you must select Add Players to Playable Teams at game start to get a better experience when playing. We will be releasing a 2019 squad update for this database in a month or two which will add roughly 8,000 real life players to the game and other squad corrections.