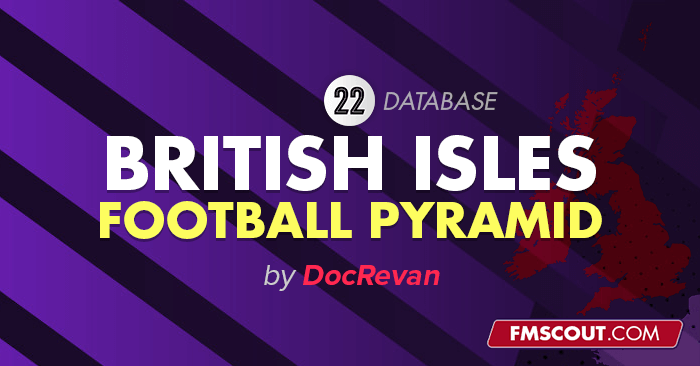 What if rather than five different league pyramids, all of the nations in the British Isles played in a single pyramid? That's what this scenario tries to answer. The existing leagues have been combined into a single pyramid with relegation and promotion, ranging from the Premier League of Isles down to the four National Leagues (Ireland, Scotland, and two covering England and Wales). A total of 244 teams are setup in this pyramid in the current version:

Premier League of the Isles - 24 teams, with the top teams qualifying for European competitions (same setup as the EPL), and the three bottom teams relegated

Championship of the Isles - 20 teams, with the top two teams automatically promoting to the Premier League, and the next four competing in a playoff for the third promotion spot. Bottom four teams are relegated.

League One of the Isles - Two leagues, one covering England and Wales and the other Scotland and Ireland, with 20 teams each. Top two from each league are promoted to the Championship, with the bottom four from each relegated.

League Two of the Isles - Four leagues, one each for Ireland and Scotland with two covering England and Wales, with 24 teams each. Top two from each league are promoted to League One, and bottom four from each are relegated.

National Leagues of the Isles - Four leagues, one each for Ireland and Scotland with two covering England and Wales, with 16 teams each. Top four teams from each league are promoted to League Two.