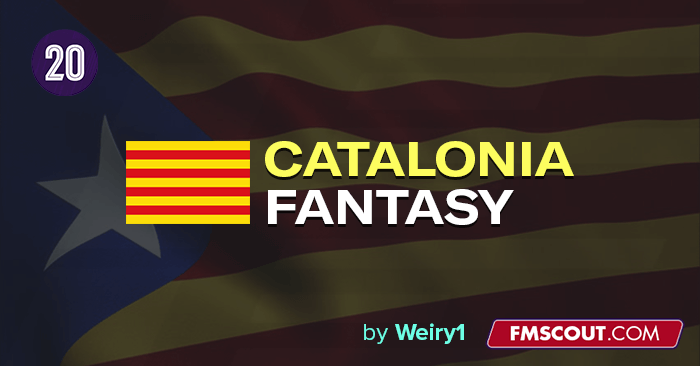 This file makes the region of Catalonia / Catalunya / Cataluña fully independent from Spain. It now runs its own 4 tier football pyramid as well as enters into the UEFA Nations League, Euro Football Championship Qualifying and World Cup Qualifying.

I replaced Kiribati with Catalonia and moved all cities, stadiums and clubs that are listed as having Cataluña as its local region. I also made all players that were born in the Cataluña region have primary Catalan nationality as well as remove their old international stats for a clean slate. I moved Kazakhstan to Asia so Catalonia can now play in European international competitions and its clubs can now enter into club continental competitions.

Catalan Primera Division (12 clubs) Teams play each other twice then the league is split and teams play each other another 2 times within the split division. 12th is automatically relegated while 11th plays in relegation playoff. Clubs must play at least 4 players of Catalan nationality in the playing 11.

Catalan Segunda Division (16 clubs) This division will most likely be dominated by B teams who cannot be promoted so the best placed first team will be automatically promoted while the best second placed first team enters into the relegation playoff with the 11th placed team in Primera Division. Bottom two teams are automatically relegated. Clubs must play at least 6 players of Catalan nationality in the playing 11.

Catalan Tercera Division (16 clubs) Top two teams are promoted while the bottom two are relegated. Clubs must play at least 8 players of Catalan nationality in the playing 11.

Catalan Aficionada Division A (16 clubs) Top two teams are promoted while the bottom two are relegated.

Catalan Aficionada Division B (19 clubs) Top two teams are promoted - there is no relegation as this is the lowest division in the pyramid.

I have simulated until 2035 and everything is working well but if you spot anything let me know and I’ll try to fix it as soon as possible.