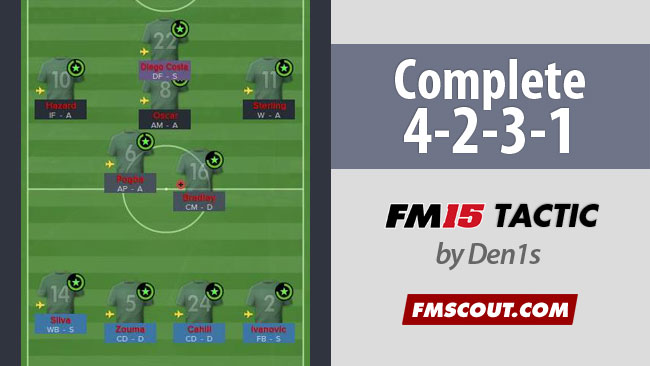 Greetings to all fellow football managers.

This is a three tactic setup for all situations with the same formation (4-2-3-1).
I have improved them over 3 seasons and now I believe they are pretty much finished.
I have used them with Chelsea, and yes I know it's a top team, but we pretty much crushed everything.
I believe the tactics will also work on lower teams and will soon try them and post results.

The aim here is to play possession style with short passing and lower/higher tempo depending on the match, outpossessing most teams, but still if you do not get higher possession you can easily rely on the defence and counter attacks, because of the deeper defensive line.

With the tactics I won all possible competitions in the 3 seasons, with 2 Champions Leagues, and the third one was lost in the final on penalties after 0-0 (very unlucky).

But lets get down to business:

The 3 tactics have different team instructions (see them ingame) and different mentality: Counter, Standart and Control

When to use each one is pretty intuitive but I'll give you some tips:

*Pass it shorter can be removed, because player instructions are set for the passing range of every player. So i am not sure if it works at all, but if it does then you can still remove it for a more direct play.

The tactics all have the same set piece instructions for corners and throw ins. For free kicks I use the default one, because I think they are good enough. For defending corners if you find yourself conceding too many, move the AML to defend too.

Goalkeeper: Sweeper support
*Yes some may say sweeper is better for a high defensive line, but in a fluid formation a goalkeeper must also be good at footwork to be able to help the defenders. So good rushing out and kicking abilities are a bonus.

LB: Wing Back support
*The wing back here is needed, because we have an inside forward upfront and we need someone to stay wider and do crosses. Good crossing ability is essential.

RB: Full Back support
*The full back stays a little deeper and plays mostly short passes, and rarely crosses. This is because we got a winger on the right side. Good defensive stats is more important than crossing and dribbling here.

MC: CM defend
*This guy sits deeper and protects the defence, intercepting counter attacks and playing short lower risk passes to nearby players. The role can be changed to a BWM defend, if you player lacks the technical ability for a CM.

MC: AP attack
*The main playmaker of the team, controls the tempo, distributes the ball and tries some long shots when possible. Plays more direct and risky passes.

AMC: AM attack
*The attacking midfielder helps all aspects of the attack with passing, crossing or shooting.

AML: Inside Forward attack
*Cuts inside prior to shooting or passing, also plays through balls, dribbles more and rarely crosses.

AMR: Winger attack
*Dribbles more at the side and crosses, cuts in only when he finds open space to recieve a through ball or to shoot.

CF: Defensive Forward support
*Very important role for this tactic, when defending he goes back to help the midfield win the ball, puts pressure on the opposition and most times drops deeper of the AMC, leaving him in the more advanced position. But when attacking he goes to spearhead the attack and goes up to recieve crosses and to shoot.
The role here can be changed to DLF support or to False 9, but the player instructions are set for defensive forward.

A tip: If you get red cards always remove first the AML, then the AMR if you get 2 red cards or an injury. They do less work defensively than the other roles. *Highlights from all seasons: *Season with Wolfsburg: I lost the league in the last damn game and nearly smashed my pc... 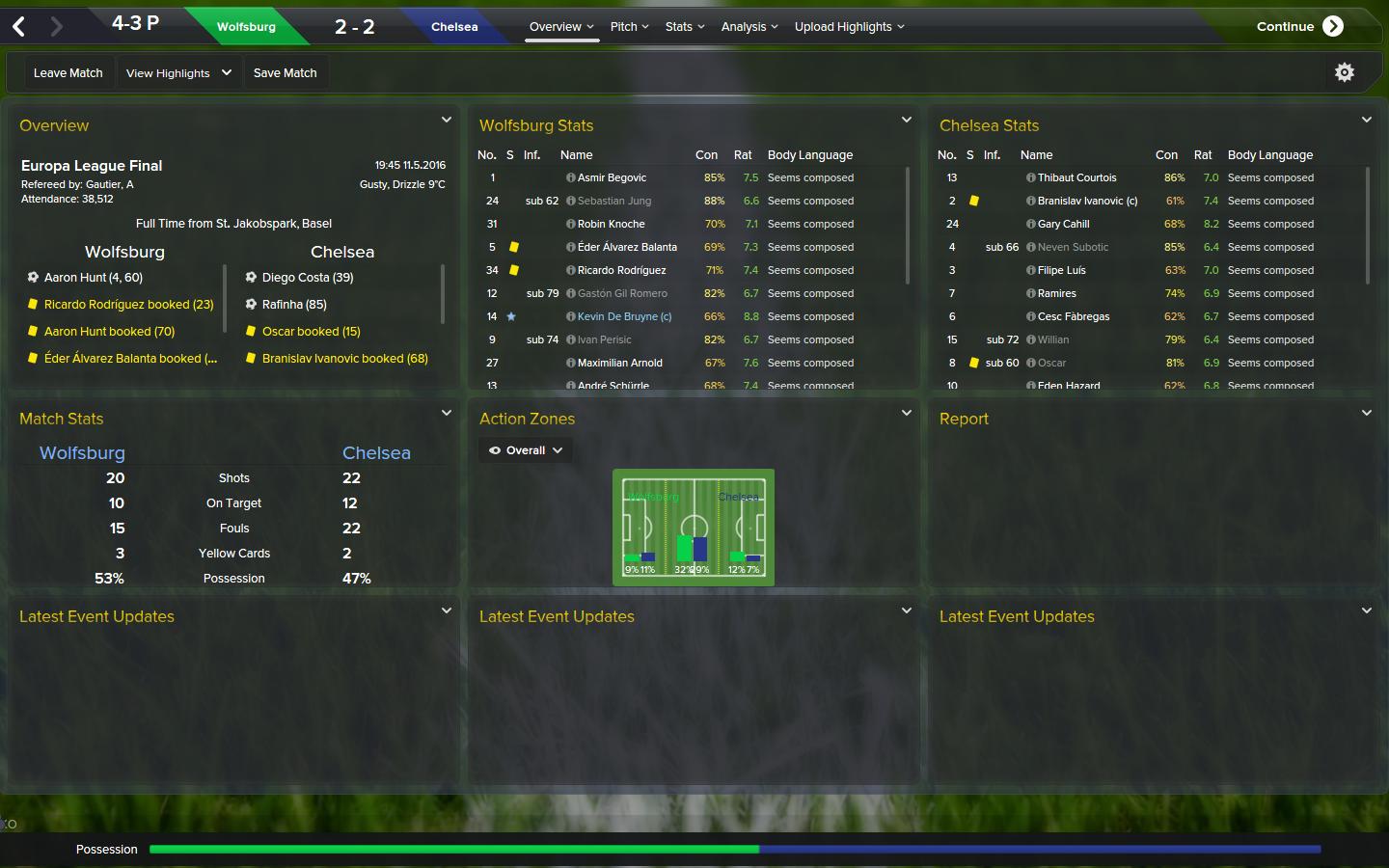 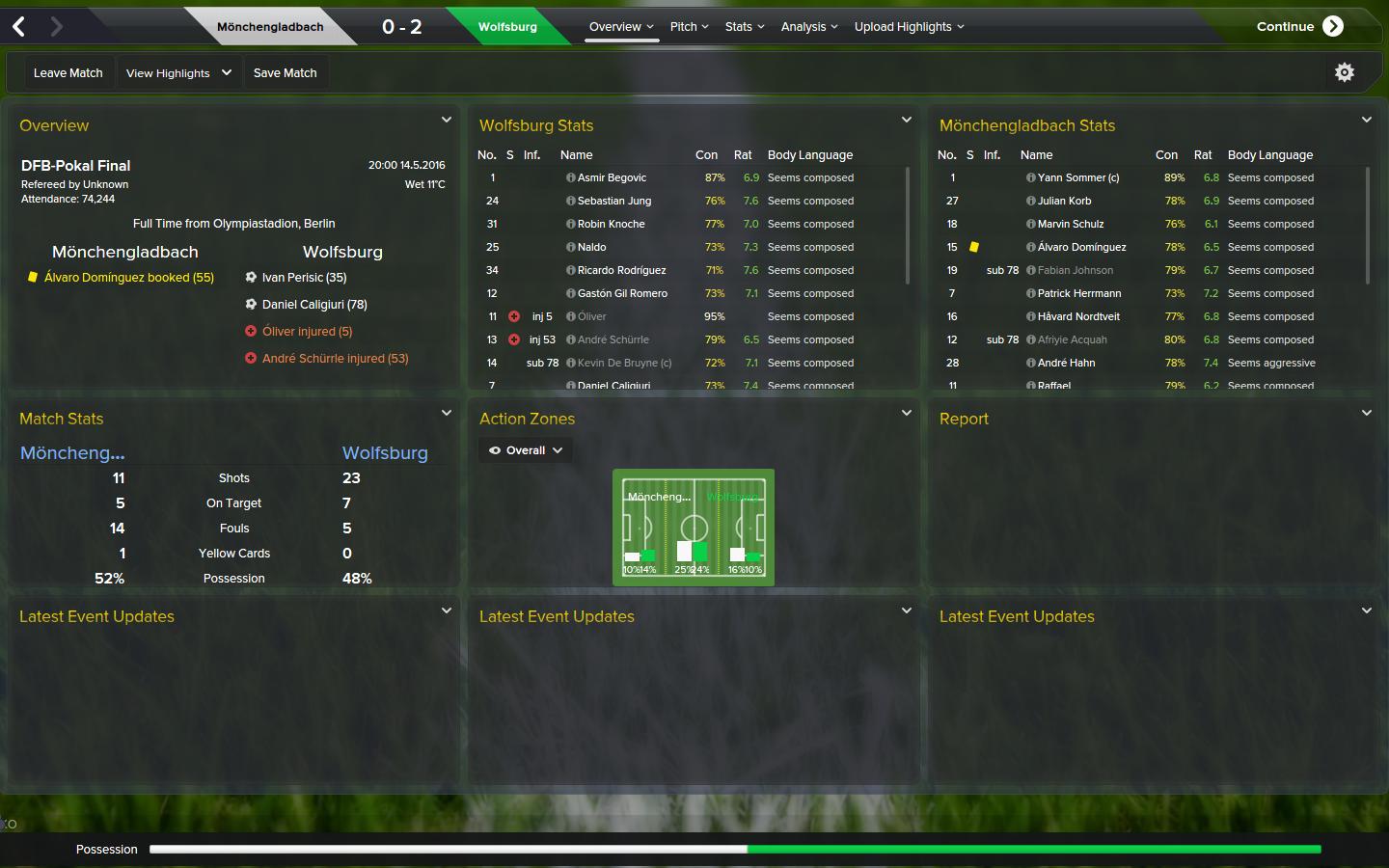 I tweaked a little the tactics for Wolfsburg, heres the link: http://www.mediafire.com/download/2k08dbc6x1xf3f6/tacticsv2.rar

Please give me feedback on how it worked out for you.