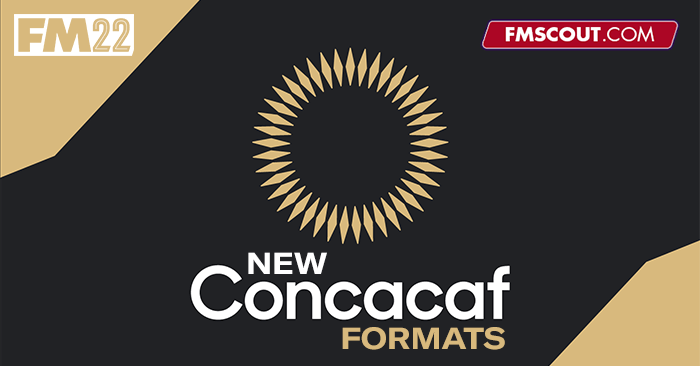 As we move through the four year football cycle, FIFA and it’s Confederations look to modify, expand and adjust their competitions for a vast multitude of reasons. Sports Interactive’s commitment to realism means that these format changes on all levels are inputted into the Football Manager - even if they are not playable.

Earlier in 2021 UEFA announced format changes to its competitions from the 2024/2025 season onward and we wrote up an article found here:here which details the changes and how it can impact your saves. CONCACAF have followed suit, announcing major changes happening in 2024 to its Champions League but also in 2023 to regional competitions.

These changes may be inputted into FM22. So in the case that they are, we have detailed out the new formats and how they impact you.


What are the Changes?

It’s actually a major shakeup which will start in 2023:

Let’s take this step by step.

The three new competitions will replace the already existing CONCACAF League which is used to qualify clubs outside of Liga MX (Mexico) and the MLS (USA and Canada) into the Champions League.

These 3 new competitions will cover each zone respectively.

This is the first “new” competition which is set to begin in 2023. It actually already exists, taking the top four teams from both Liga MX and MLS into a single-elimination tournament. In 2023 the tournament will expand to include ALL clubs from both MLS and Liga MX with the top 3 teams qualifying for the Champions League.

Both leagues are to pause the regular seasons to compete in this tournament. We do not know if changes in format to the MLS or Liga MX will occur to ease the schedule - this will be determined in due course but most likely not change. The style of this tournament is set to be one month long and a “World Cup-style” knock out competition.

The exact format has yet to be announced, all we know is that it’s a “World Cup-style” knock out competition played within a month. This expanded competition has been sanctioned by CONCACAF meaning that it’s rewards are to play in the new Champions League. The team who wins will get an automatic bye to the Round of 16 while the team that comes second and third will go to the qualifying round… more on that later.

This is a “new” competition set to begin in 2023. This will include teams from its seven members; Belize, Costa Rica, El Salvador, Guatemala, Honduras, Nicaragua and Panama. What we do know is that this competition will host 20 Clubs.

How do you qualify for this cup? Well according to CONCACAF this will be determined via “Domestic League Play” and a new UNCAF Cup. The exact details of this new competition, slot allocation and so on is unknown and will be given more detail in time.

What we do know is that this tournament will have a format of a group stage and a knockout format, it is unknown if there are qualifying rounds for the group stage. The winner of this Central America Cup will get a bye to the Round of 16 and the second-place finisher, two semifinalists and two play-in winners will go into the qualifying round.

This is a “new” competition set to begin in 2023. This includes teams from all 31 member associations of the CFU. The competition itself will host 10 Clubs.

How do you qualify for this cup? According to CONCACAF this is determined via “Domestic League Play” and a new CFU Cup. Again, the exact details of this competition, slot allocation and more is unknown and will be given more detail in time.


It is important to note that these competition formats are all subject to change. As UEFA have done with the new competition formats stating that even the number of teams can change - CONCACAF could also change formats. This means that the sub-competitions such as the CFU and UNCAF Cup could change, or that the Caribbean Cup and Central American Cup could increase in size to accommodate more teams. CONCACAF have stated that more information for these competitions will be given in due course.

So as we look at this new format - yes it is a lot to take in, there are still some questions to be had. What about Canada? The winners of these competitions only account for 3 slots in the Round of 16, what about qualifying and winners of leagues?

With these questions in mind, now let’s explain the new format of the CONCACAF Champions League

The format is unique and looks odd at first - 27 teams is not a nice number, also there is no secondary competition.

So how does it work?

This includes the 22 teams for Round One. Obviously teams will be divided according to coefficients and will be drawn out accordingly.

From here, it is assumed that coefficients will draw out the knockout matchups and a straightforward knockout tournament will take place.

It is pretty straightforward after the qualifying round, a two-legged knockout round which will lead to a single-legged match to crown the Champions of CONCACAF.

How Will This Impact You?

Well the first question would be is this even in FM22? Unlike UEFA’s announcement which happened earlier this year, CONCACAF’s announcement has occurred when we are already starting to get updates on the release of FM22 - meaning that it may already be too late. But that hasn’t stopped the team before so let’s assume for now this is going to be in FM22.

As you can see from the slot allocation, there are now plenty of opportunities to compete in the Champions League if you manage in Liga MX or MLS. It is still uncertain how slot allocation will work, Liga MX for example if spread around evenly could have up to nine teams competing in the CONCACAF Champions League, filling all six available slots given to Liga MX and the 3 Slots given to the Leagues Cup winners. This could be subject to change however and these slots could be rearranged. It’s important to note that CONCACAF are still set to release more information but that hasn’t stopped Sports Interactive before from inputting new competitions into Football Manager and they fill in the grey areas accordingly.

The new formats will mean that all nations outside of Mexico and USA will now have a more level playing field to compete on, building up the competitive level, building the region and then theoretically making CONCACAF more competitive. Similar to how the UEFA Nations League and UEFA Conference League are doing the same for “lesser” nations, leagues and clubs. As for you as a manager it means increased awareness of players, leagues and increasing the standard of football if you manage in these regions or scout them.

As a manager you now need to be prepared for more football… potentially a lot more. Not only do you need to deal with a new regional cup competition, you may also need to deal with the new Champions League as well if you qualify for it. This means being better prepared with your squad, being more aware of your players fitness levels and the impact that training has on their physical state. Also more investment may be needed in scouting, from looking at your continental competitors to now having more player data available thanks to these competitions.

A final impact which applies to real life more but can also be found in Football Manager is associations applying to become a part of FIFA. There are several nations around the world who are not members of FIFA but are a part of either sub-confederations or the main confederations. For example there are 6 members of CONCACAF all within the CFU who are looking to become members of FIFA (in particular Martinique) - this increased competition can allow the tiniest of associations to build, prove their clubs can compete and gain membership.


The truth is that this announcement may have come just a bit too late. After all, as of the end of September we still don’t have more updated information on the UEFA formats, let alone the new CONCACAF ones. But what we do know is that like the UEFA changes, these changes are guaranteed to happen in real life starting from 2023 onwards. If more announcements are made between now and FM22 - we will update accordingly.

If not, we will still notify the community and write a more detailed update for FM23 sometime next year so none of you are blindsided no matter what Confederation you are managing in.