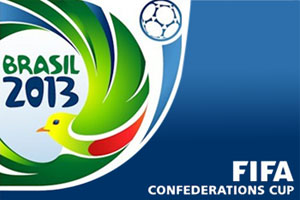 There are many places that help make betting enjoyable, and easier, helping lower the risk of any controversy within sport. There are newspaper solely for betting, numerous books acting as guides, with rules, tips, and how to bet safely while keeping it entertaining. One of the biggest places to help with betting is the internet. There are several websites offering help and guides on betting, but also allow betting easily and quickly on the internet, such as Unibet. Unibet are an online betting company, which give you the opportunity to find the odds, tips, and place bets on plenty of different sports. Football is just one of these sports, and with the FIFA Confederations Cup starting Saturday night, Unibet will be heavily involved with working with others to help them place bets, showing the match odds, side bets and any specials, and then allowing bets to be placed online.

With just eight teams featuring in this year's Confederations Cup, odds are being placed on the match winners, tournament winners, goal scorers for the tournament, and even goal scorers for each match, and those are just a few examples. Brazil are seen as a dominant force throughout the world in football, and many bookmakers, a person or company who takes bets, calculates odds, and pays out winnings, have tipped Brazil as most likely to win the tournament, as well as finishing first in their group. Unibet are offering odds of 2.20 for Brazil to win the tournament. What does this mean? With decimal odds, the odds shown, in this case 2.20, are how much you would win for every £1.00 you placed on the bet. However, that total includes the £1.00 you deposited on the bet. So if you were to bet just £1.00 on Brazil winning the tournament, and they did, you would win your £1.00 back but also another £1.20, totalling the 2.20 shown as the odd.

Spain is another country tipped for possible glory. Spain will play in Group B, against Uruguay, Nigeria and Tahiti, making them favourites to win their group, with Unibet placing odds of 1.38 to finish as winners of the group. Many bookmakers feel Spain are certainly in contention with Brazil to win, and Unibet have Spain as second favourites to win the tournament, with odds of 2.60, just below that of the Brazil team. Another possible bet which many enjoy is about the player who will score the most throughout the tournament. With many options, Luis Suarez of Uruguay and David Villa of Spain are seen as front-runners, with Brazilian’s Neymar and Fred just behind. For this tournament, both Suarez and Villa have been given the odds of 8.00 from Unibet, while the Brazilian duo are both at 11.00.

Tahiti is a footballing side, and an island, that not many people know about. They reached the Confederations Cup after winning the Oceania Nations Cup, edging big sides Australia and New Zealand to the trophy, the first team to win it besides to two Oceanic footballing giants. Tahiti are considered the minnows of this tournament by everyone, and as a special, betting company Unibet are offering a bet that Tahiti score at least one goal in the tournament, with odds of 2.50 for yes and 1.48 for no, showing they believe Tahiti won’t score a goal across at least three games. These sorts of bets are unique, but are what people enjoy, getting involved and having fun. Bets like these, which can only be done at certain occasions, are what make betting so unique, popular, and enjoyable for everyone, and can also be found easily in newspapers and on websites.

The Confederations Cup is sure to be full of drama, which will only make the games more appealing those who want to bet, but also just want to watch, maybe guess the score line or who will score the first goal. Whether you do bet on the tournament or not, it can be enjoyed. Even so, betting does helps the tournaments and games become bigger and better, not only helping the public enjoy the tournament, giving them that adrenaline rush as a result of their bet, but meaning more people watch and get involved with the tournament too, which can help a lot with revenue and income.