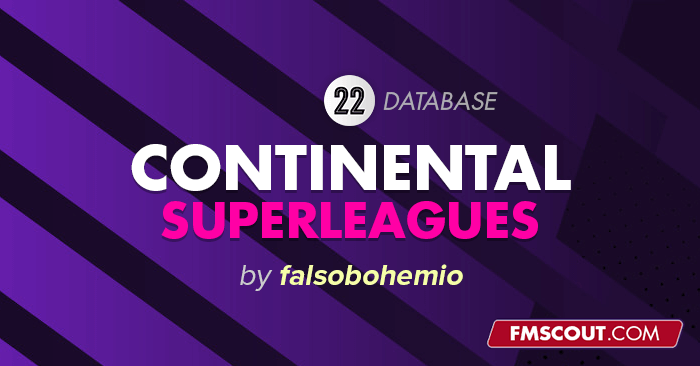 Good afternoon everyone. It's sunny here in Buenos Aires I want to give you a fictional, rare DB that is Giannis Infantino's wet dream. Welcome to the Continental Superleagues

The theoretical basis of this database is that the national leagues have ceased to exist and there are only these regional conglomerates that give much more money in prizes and so on. Let's start with South America whose DB has 800 playable teams. 200 Argentinean teams, 200 Brazilian teams and 50 from each of the rest play in this 8-division league system. In the first, the Superliga, there is a champion, 3 relegations and 4 promotions.

The second and third divisions have similar formats, with promotions and promotions. The idea is that all 10 countries are represented in the top division. The fourth and fifth divisions have group formats, with direct and reduced promotions (no promotions). In the sixth and seventh divisions, the "falopa" is starting to appear. Everything was measured by the reputation of the teams, with two exceptions: Cuervos de Ushuaia and Libertad de La Quiaca. Yupanqui playing in Venezuela? It can happen

In this as in all the super leagues, there is no quota for foreigners and each team produces players from its own country, that is to say, the Argentines produce Argentines, the Brazilians produce Brazilians and so on. There are many TV and victory prizes.

The Copa Libertadores is played by all the teams of the structure, in turn, each country plays its own local cup, whose champion qualifies to the Copa Sudamericana with group format, semifinals and final. All international matches are two-legged.

CONCACAF was very difficult to do because of the difference between the federations, I tried to give quotas to Central American teams but they will not last long. Its Superliga, the strange thing is that it has play-off of champions as good Mexican or Yankee.

The sixth, or deep promotion, is where the islands are represented, which can reach the elite thanks to the prizes awarded by the competitions but it is a very difficult path. The CONCACHAMPIONS is played by absolutely all teams, while there is a cup for North America, one for Central America and the Guyanas, one for the Lesser Antilles and one for the Greater Antilles.

One of the most exciting and evenly matched Super League is the African Super League, where many countries are represented and the spirit of the competition is really captured. As in all of them, the second and third divisions have the same format as the first. There have been tweaks so that there are not too many teams from one country. All the +2000 rep teams play except in countries where there are none and then the limit is lowered so that they have representation. There are no regional groups, so it is all about mixing and traveling from one end of the continent to the other. There are a total of 8 divisions and a little more than 1000 playable teams. The eighth, which I left out, where the teams from the smaller countries play and the deep promotion. The African Champions League is played by all the teams in the structure, while the Confederation is played by the teams from the fourth division down.

Going away to Auckland, being from Tehran. Yes, it can happen in the Asia-Oceania Super League, the strongest and toughest of all. Good prize money to offset travel and a good opportunity to use a league that is not often used. I tried to have representation from all the major countries, and even tweaked Auckland to have some oceanic presence. It is the most populous structure with almost 1400 teams, in 9 divisions. The rod was the same: 2000 of reputation. A lot of Australian presence. The Asian teams play the AFC Champions League and the Oceanic teams (+ Australia) play the OFC Champions League.

A lot of TV money and prizes to distribute among GIANTS teams looking for the elite. Further down the ladder, things get a little bit slippery, everything is measured by reputation. Already in the promotion it is evened between the big teams from small countries and the small teams from big countries, the prize is for everyone and the same with the TV money.

The Champions League is played by all the teams of the structure, in addition to which the top 8 of the Superliga play the Top 8, the 4th and 5th teams play Europa League and the 6th, 7th and 8th Conference. In turn, 6 countries have their cup plus the 10 regional cups: Balkan, Benelux, British, Eastern, Imperial, Caucasus, Mediterranean, Microstates, Nordic and Baltic.