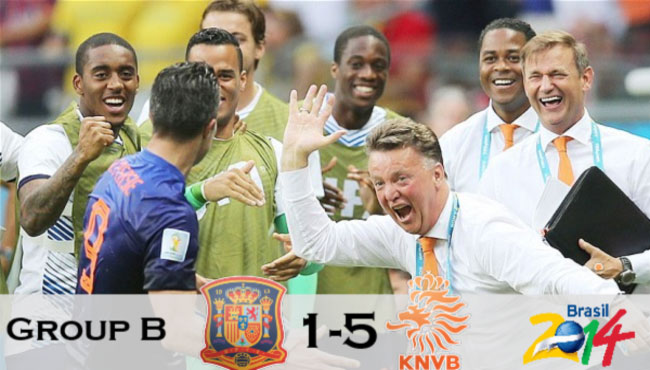 After their previous clash in the 2010 World Cup Final, both Spain and The Netherlands locked horns once more to kick off their World Cup Group Stage at Arena Fonte Nova, however the game went very differently than first predicted.

Louis van Gaal's men destroyed the World Champions in a 5-1 thrashing with Robin van Persie and Arjen Robben getting two goals each, making many fans around the World doubt Spain's chances of winning the World Cup yet again after previously winning it in 2010.

Pre-match Robben spoke before the game of the still-vivid memory of Casillas denying him the chance to give Holland a potentially winning lead in the World Cup final of four years ago in which Andreas Iniesta scored in the dying moments of the game to win Spain the World Cup, describing it as a snapshot he will never forget but one which now belongs to the past tense. However the memories came back to Robben as Diego Costa, who had a hostile reception from the Brazilian fans as he decided to play for Spain instead of Brazil, got brought down in the penalty box and Spain were awarded a penalty to take the lead early on.

Xabi Alonso stepped up and emphatically finished past Cillessen to make it first blood to Spain and demoralised the Dutch players, or so it seemed as what we witnessed after that goal was anything but that.

Just as we thought the half was going to end with Spain in the lead, Daley Blind advanced forward and swung in a beautiful cross which Robin van Persie ran onto past Sergio Ramos and Gerard Pique and what we saw next was truly incredible as van Persie rose up high and made contact with the ball using his head and it flew up and over Iker Casillas and into the back of the net to equalise the game! van Persie then ran over and celebrated with van Gaal which showed how good their relationship is currently. 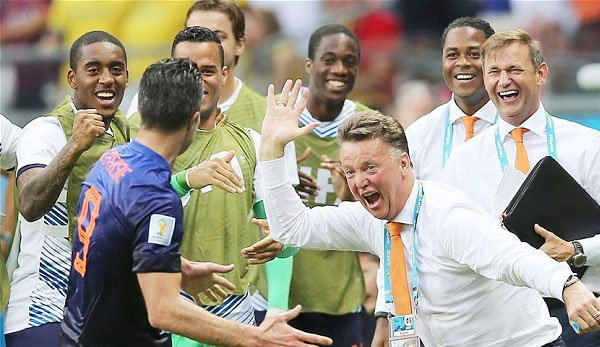 The Dutch players went into half-time with a huge spring in their step due to van Persie equalising and when they came out for the second half they really stepped up their game and started to press the Spanish midfield deeper and deeper up the pitch and started to show more desire than they did in the first half.

van Gaal's men deservedly took the lead when the ever so reliable Xavi lost possession and Blind supplied another pinpoint aerial pass from the left, which Robben expertly controlled before eluding Gerard Pique and finishing confidently.
Spain were really struggling now and van Persie almost got his second and Holland's third when the ball bounced up in-front of him and he struck it sweetly, rattling the crossbar which gave even more confidence to the Dutch as they knew Spain were vulnerable.

Then the inevitable happened as Holland won a free-kick which Wesley Snejder swung in towards the back post where De Vrij bundled the ball into the net as Casillas completely missed the ball and the goalkeeper complained the referee that van Persie fouled him but the captain earnt himself a yellow card for his protests.
David Silva could have given Spain some hope when he scored from close-range but his effort was correctly ruled offside as Cillessen saved a shot which he parried towards Silva who was standing in an offside position.

If you thought it couldn't get any worse for Spain, you were wrong as Casillas mis-controlled a backpass and van Persie was the first on the scene and the Dutch captain scored his brace making it 4-1 in favour of Holland which left many people questioning Casillas' abilities after he'd struggled all game. 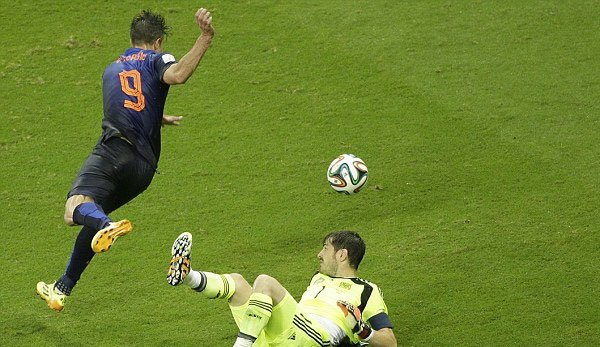 Robben then capped a fine individual performance with a fine solo goal. The winger raced from inside his own half to latch on to Sneijder's through ball and outpaced Ramos before taking the ball round Casillas and smashing past two defenders on the line.
Spain were in pieces and continued to be torn apart, substitute Jeremain Lens and Robben going close.
And Spain's torrid evening was summed up when substitute Fernando Torres failed to score despite having an open goal. The Chelsea striker looked certain to score but Daley Blind rushed in and stopped Torres with a perfectly timed challenge.

Torres's miss summed up Spain's performance as they were practically out-played by Louis van Gaal's men and this victory will be a huge catalyst for Holland to go on and win the group whereas Spain will need to re-group and prepare to face both Chile and Australia in their next two games.