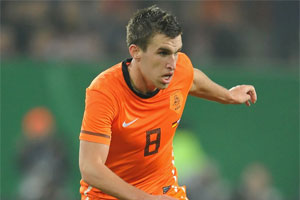 Earlier today it was reported that Manchester United had agreed a ‘gentleman’s agreement’ with Benfica for a £17 million transfer to go through on the 1st of July. Bookies are now refusing to take any new bets on Garay joining United this summer as they are certain it is going to happen. A similar situation has occurred Dutch midfielder Kevin Strootman. Bookies have stopped taking bets on Kevin Strootmen to United as of last week as they believe the transfer is imminent. David Moyes has defiantly come in to make an impact with two quick first team signings. But the question is do United really need these two players?

Many times last season Manchester United’s defence was called into question with many sloppy goals conceded throughout the majority of the season. United’s attack was needed to dig out the team many times especially the likes of Robin Van Persie who was needed to dig out his knew side many times this season. Ezequiel Garay is a centre back that has recently grasped the attention of the footballing world for his good performances for Benfica this season. Due to Vidic being on the decline it is vital that United find a centre back partner for Phil Jones who has shown himself to be a world-class centre back especially with Rio Ferdinand getting on in his career .

Ezequiel Garay is exactly the sort of centre back United need to partner Jones. In a bygone era, Garay's talents in intercepting and reading the game, as well as his calm, composed manner, would have had him marked out as a sweeper, but in this age of flat-back fours and indecipherable offside laws he is a center-back that is more comfortable on the ball than most. His success alongside fearless Luisao has not surprised, with the Brazilian only too happy to emerge from the defensive line to win aerial duels while Garay sweeps up any danger behind him. He has the potential to be a world-class choice for United. He was a vital part of Benfica’s side and he will be a huge addition for Moyes’s team this summer.

As for Kevin Strootman he has been a vital part of the Dutch under 21 side which is currently dominating there group in the Under 21 Championship. He also a vital part of the PSV side which came second in the Eredivisie this year. He scored seven times for PSV this year in all competitions. Standing at 6ft 1in, he cuts a languid figure which is reflected in his style of play; he brings a reassuring calm to proceedings even in the most stretched of games.

In the modern game, this role, of receiving the ball from the centre backs and dictating play from deep, has become vital. At Real Madrid, Xabi Alonso effortlessly pulls the strings from there for the La Liga champions while a great example of the position in the Premier League is Mikel Arteta whose maturity in midfield is a key factor for any good Arsenal performance. Strootman could offer this for United who are crying out for a more assertive midfielder who can also score, control the possession of the game and defend. I think he will be a vital part of the United team if he joins this summer and could possibly create a stunning partnership with Michael Carrick who became a star central midfielder last season.

I think if these two transfers do happen I think David Moyes has made a very good start to his Manchester United reign by signing two great players that will improve our team by a great deal. If these transfers go through I can see a very strong side for United next season.