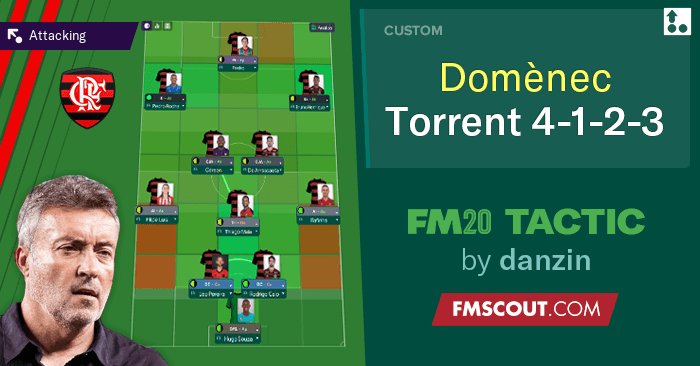 Original text was in Portuguese, and used Google Translate.

As the coach we all know that he is still at the beginning of his job and you can't get a clear idea of ​​his idea of ​​the game, but we know his style and because he worked with Pep I used Guardiola's POSSESSION GAME as a basis, I just modified the way Pep likes to work, giving his team breadth of play and making the midfielders fill in the opponent's small area.

The tactic is a little appealing but needs time, and players quality so that it works perfectly, in this case 2 tips of great skill and speed, I used BH and Pedro Rocha as these players, as I had already sold Gabigol and Michael.

Let's go with the tactic itself, I built the team based on that image 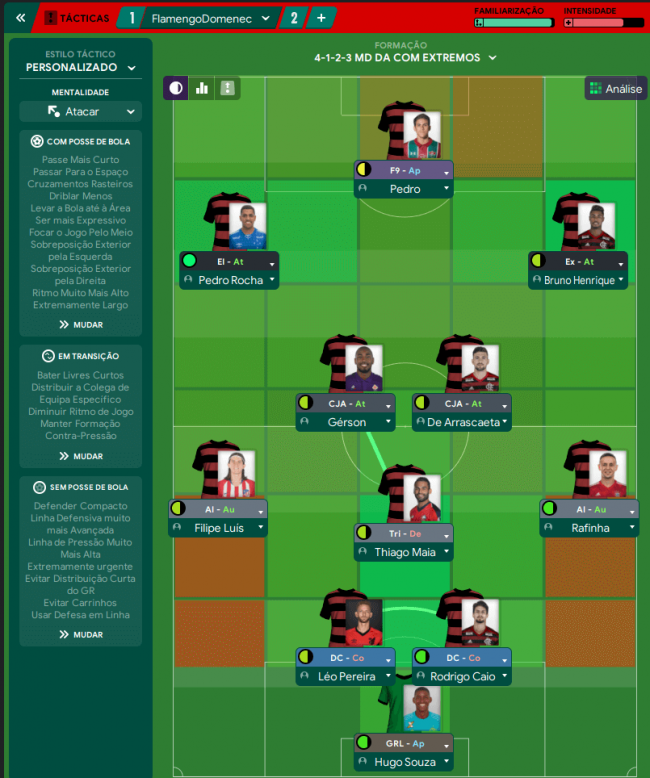 Reminding everyone that the tactic needs a long time so that players can be able to perform the right moves, since it is a possession style so it requires a lot of movement.

I'm in my second year of Flamengo, I was able to perform in the first year a more vertical style without much ownership, and in this second year I was able to do my style since I took the team from the beginning, making cast cast etc.

Let's see the structures of how the team works:

GK PLAYS WITH THE FOOT: the goalkeeper is essential to know how to play with the foot to help the defenders

Defenders: Defenders need to know how to play, it is essential

DM: I use a technical midfielder, I don't like iron feet, adapt a midfielder to that function, he does not need to be a first-time scorer and disarmament, you will always have the ball in the match and will make little use of defensive attributes.

Mids: the 2 socks need to be a kind of attacking sock, a player who fits these attributes very well is Reinier, the team with the ball plays with the 2 socks talking all the time is a kind of Xavi and Iniesta, a player who knows how to touch and infiltrates the area well, and they also need mobility, I did not put a mobile organizer because the style itself asks that the 2 are present to occupy space within the opponent's area, they need to INFILTRATE and make PRESENCE in the opponent's area;

Wings: one is tapering / amplitude, while the other is of extreme depth, why this? simple, when the team has the ball the 2 NEED to give amplitude, first because they pull the mark, and second because they would abuse a game called QUALITATIVE QUANTITY, which means the player has technical superiority in the one against one and abuses of the marker that remains there to mark it

Forward: a false nine is essential, if possible one who knows how to play with his back to the goal, he is the key to open spaces for everyone in the attack, he will not be the guy with the 3 goals in a game, but he will make EVERYONE score goals with openings of space and movements outside the area making the defenders keep scoring the ball, which greatly facilitates the positional game, since it is an infiltration game

I could make a long text, but I just gave a basic summary of how the tactic is positionally worked, her style is a little complex, it is not so easy to execute in FM20 but the improvement in this style of play compared to FM19 was significant 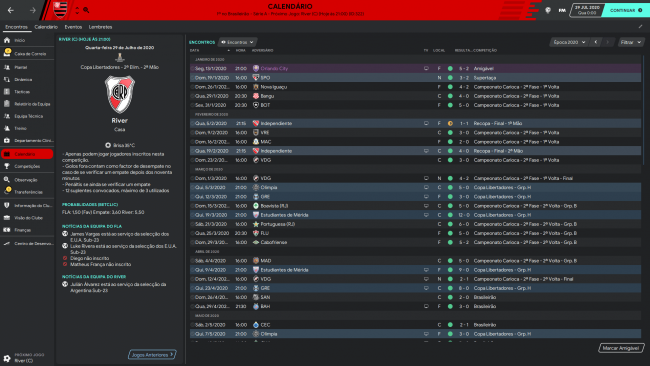