Together with a friend I started a career. He started with Juventus and I created a custom team with the value of the squad of Inter Milan. I named my team Escusa (Apologies on advance for the absolute domination my friend would experience the coming years

My goal was (besides winning everything and getting as much stats as possible) to create a new tactic, that hasn't been seen before (in real life or on any FM forum). I played with a 2-3-3-2 WB for some seasons and also won 2 titles with this formation. On champions league level i didn't win any trophies yet and I started craving strongly for this award. I started 'playing' (red: trying new stuff) with my tactics again and after 2 seasons of trying, I found a total DOMINATION tactic. 4 seasons later: 3 champions league finals, 2 champions league wins. Also winning the league title every single year (gladly I named myself escusa, otherwise my friend would've highly likely already quit this career). Also setting new records for most goals scored in the Champions league, Serie A and Copa Italia in a single season.

I really don't know why I have been waiting to share this tactic for so long, I really didn't know FM had such an active community. Obviously I have build a fairly strong squad after all these seasons, which makes it a lot easier for a domination tactic to be working, but the stats can't be denied and the elegance of my playing proves me game to game that my tactic absolutely broke the game.

As I said before, I wanted something special, something unusual. Well: my formation is: 3-1-4-2 DM 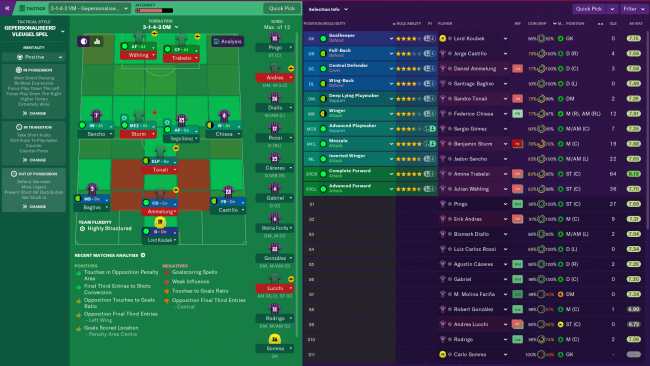 Here you can see the tactics. As you see I play with 1 (1!) defender in centre. I like goals, I like stats, so taking away a defender to put him in offence, was a vital aspect to be in my tactic.

But how could I make this up, wouldn't I be demolished by any half decent team?

There's 2 vital defensive aspects to this tactic to be working. You have to play very narrow and your backs have to be playing defensively too. Offensively the essentials are your GK to be distributing play to your defensive playmaker and you have to attack very wide.

These mechanisms are key for this tactic. This way, defensively your backs will pick up a more central role and your central defender will become more like a sweeper. Offensively your deep-lying playmaker will demand the ball low. At this moment the central defender will go wide so they stand like 2 central defenders. This gives your backs the opportunity to play higher and very wide to create lots of space to play the ball. The result: Defensively a very strong 3 man defence and offensively space you have never seen before, with 8 players before the ball, using every little bit of space on the field.

I play a more direct passing style and a high tempo of play. Because the space between my players in build up is large. I have a lot of players going forward, so practically every ball deep is dangerous. Mostly I score by a striker that receives the ball with his back to the goal, plays wide to my winger and then joins the other striker and other winger in the box to finish the cross. I also score a lot of goals by deep balls to 1 of my striker, who, because i play very wide in offense, mostly has just a simple pass to give to my other striker to finish it of.

It is a very special, dynamic tactic, which might take some time to be working because it demands very strong interactions between ur players. Ideally, defensively your formation must look like a 3-1-4-2 and offensively like a 1-3-2-4. The power of the offensive wingers that join strikers in attack, almost always get 3 offensive players in the box to finish off crosses, even after the most speedy counter attacks. On the other side of the pitch, your backs will be passing the ball on the side of the mid-line, but when you lose the ball, they will immediately retreat more central to form a 3 man defence.

Now I will discuss some essential player positions. I would say your centre back is the most important. Spend your money well on a good centre back, with especially strong concentration, positioning and physicality. Another vital role is the deep-lying playmaker (DM) with very good passing, vision, composure etc.. (playmaking abilities) Wingers have to be very fast and strikers are preferably complete strikers, who can not just score goals, but also participate in play and hold on to a ball. I would suggest having 1 very fast pressing striker and 1 complete striker with a lot of ability with the ball at his feet. Honestly, my backs have always been the weakest part of my squad, but I never had 1 playing bad in this formation. Don't expect ur backs to be assisting goals though. 80% of ur goals will come by ur strikers, or your wingers.

- Here you can see the table of my last season, in which I broke the all time scoring record in Serie A. As you can see I also have the best defence in competition, which is pretty incredible for having just 1 centre defender. 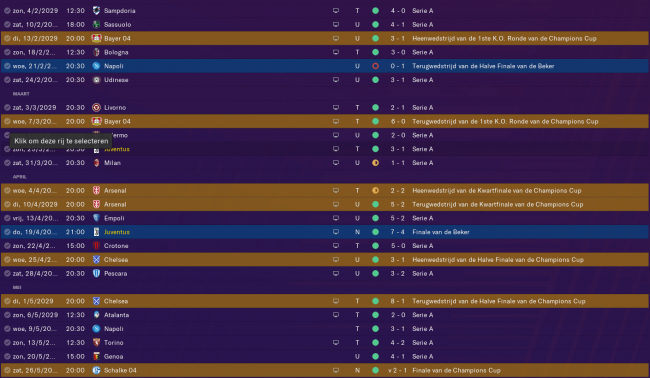 - The second part of the season. As you can see, pretty much dominating every side (poor Chelsea). It doesn't really matter either the opposite side is offensive minded or defensive minded, because you will dominate play anyway. These tactics are strongly focused on own capability and I never ever change them since 2 seasons because I believe I have found perfection. The only thing I do change from time to time, is the role of the forwards. I use either Complete forward, attacking forward or pressing forward. I also always prefer to always have 2 different roles.

So, I hope some people will be able to enjoy my tactics and I am really looking forward to hear whether my tactics work for you too!

I wish you an awesome day, a lot of fun playing football manager and especially, a lot of goals with these tactics.