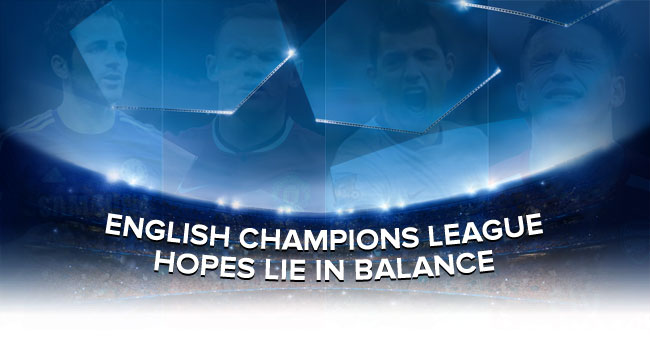 English sides haven't fared too well in the Champions League since Chelsea surprisingly won the competition back in 2012.

Last season there was not a single Premier League representative in the quarter-finals after Chelsea had been eliminated by Paris Saint-Germain, Arsenal by AS Monaco, Manchester City by Barcelona, and Liverpool were dumped out at the group stage.

Progress has been made during the 2015-16 campaign as Manchester City have already confirmed their place in the second round. Chelsea need to avoid defeat at home to FC Porto to progress, whilst three points will see them win the group.

However, it's a lot more difficult for Manchester United and Arsenal if there are to be four Premier League sides in the last 16 this season. Bettingexpert's full UK bookmaker bonus comparison is a good place to start if you are betting on the midweek games, and don't want to get a few free bets while backing your own teams too. United and Arsenal could do with a few bonuses of their own on the pitch this week.

The Red Devils will start the final group stage game in VfL Wolfsburg in second place, only one point above PSV Eindhoven and with the Dutch side winning the head-to-head. It means United need to match PSV's result in their last game, at home to already-eliminated CSKA Moscow.

CSKA would qualify for the Europa League with a victory at the Philips Stadium but that's all the Russian side have to play for. For them that is incentive, a competition they took part in and won back in 2005.

Victory for Manchester United in Germany would see them win the group. To be honest, this German side aren't anything special without Kevin De Bruyne anymore. We've not seen enough from Julian Draxler, and sure they have some individual talent – Andre Schurrle's pace down the left, supported by full-back Ricardo Rodriguez. Centre-back Dante was once linked to United, they also have Brazilian international Luiz Gustavo and target man Bas Dost does score goals. We do like Max Kruse but a good United team would see these off.

Unfortunately for United they've looked below-par themselves under Louis van Gaal. Their 2-1 win at Old Trafford at least gives them some positivity going into the game but we expect it to be a tight one. Will Manchester United progress? We're leaning towards a 'yes'.

Arsenal were beaten in three of their first four group stage matches this season but will still make it to the second round if they win in Olympiacos by a scoreline other than 1-0 or 2-1. That means they need to score at least twice against the Greek champions who have been perfect domestically this season and who won 3-2 at the Emirates back in September.

We had strong hope in Arsene Wenger's side, that was until more injuries were added to the list. Alexis Sanchez and Santi Cazorla's latest injuries are as about as bad as it can get for the Gunners. They weren't too convincing in their 3-1 win over struggling Sunderland at the weekend and with few healthy players to rotate his squad, Wenger will be asking a very lot from a small group of players.

Even the bookmakers don't like their chances, making Arsenal odds-against just to win in Greece. They may need to win by more than one goal which significantly increases the odds too. We'll back the English side to win but qualification to the second round for the Gunners is the most difficult of any of England's four sides this season.