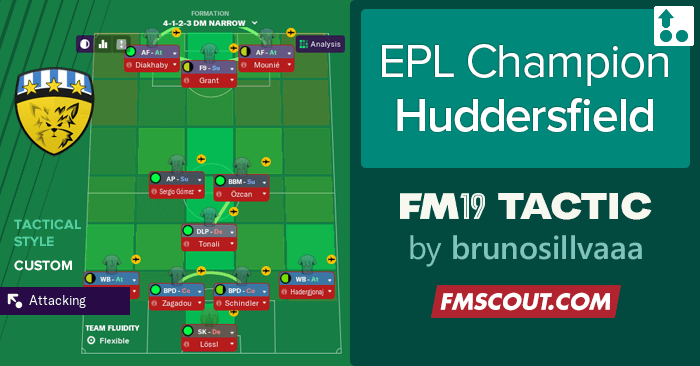 As you can see, my main players were my two Advanced Forwards (Mounie and Diakhaby) that scored 51 goals together, but they were also very important defensively because in every game I set the player instructions of them to mark the full backs of the opposite team.

With this instructions, when the opposition had the ball, my team defended on a 4-5-1 with Grant up front.

And when I had the ball, I played with a kind of 3-4-3 because my full backs pushed really high, and tonalli set back to play between the CB (that had instructions to stay wider). So the process of construction was made with 3 players (Tonalli and two ball playing CB). These are the characteristics of the roles:

RB: Hadergjonaj - Wing Back Attack (Pressing Intensity - Less Urgent / Stay Wider) --> Amazing season, wasn't my first choice at the beginning of the season (Tommy Smith was but got injured)

CM: Aaron Mooy / Sergio Gomez / Oliver - Advanced Playmaker Support (Roam from position / all the rest unmarked) ---> Was like the free role on the team. Had the freedom to do whatever he wants.

Karlan Grant - F9 and PF (All Default) ---> Because the two AF's would stay really wide. I needed someone to stay on the middle. Defensively his function was to pressure the CB's. He managed to score 25 goals. One Season Wonder maybe. All the Transfers I made:

Sorry for not explain everything, but my english isn't the best. And you can Donwload it.
Just wanted to share the tactic.