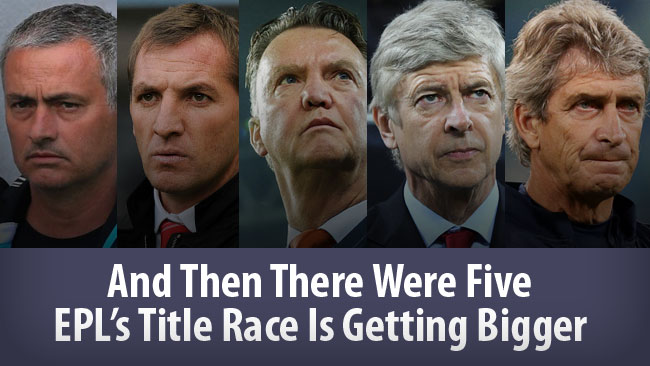 Last season we welcomed perhaps the most open title race in Premier League history. It had twists, turns, trials, and tribulations, oh and one horrible slip, yes that Steven Gerrard slip.

It looked like Liverpool’s title for the taking as they shocked everyone with their slick attacking football, whilst Manchester United fans watched in dismay as the Merseyside team strode 20 points clear of them.

So this year is hotting up more than ever. We’ve already seen the likes of Diego Costa, Cesc Fabregas, Alexis Sanchez, and Ander Herrera join up with the big boys, and transfers aren’t likely to end there. But who is exactly in the best shape to go all the way this season?

We take a look at the Premier League’s contenders, and just how they’ll fair in 2014/15.

Arsenal
Arsene Wenger rediscovered his magic touch last season, bringing the club their first piece of silverware since 2005, and with Alexis Sanchez joining the already lethal attacking line-up, they’ll be hungry for more.

The Premier League title eluded them last term, despite an impressive run up to Christmas, but the second half capitulation including a 6-0 defeat at the hands of Chelsea, 5-1 at Anfield, and a 3-0 defeat to Roberto Martinez’s Everton, saw them drop right out of the race and finish fourth. Strengthening in both attack and up-top has made Arsenal look fancied this time around, but falling apart has become the Gunners forte, and we kind of expect to see it again.

Chelsea
Last season was the club’s first trophyless season since 2011, and with the club having spent over £80million already, the pressure is on Mourinho to bring the title home. The Chelsea odds of 2/1 with Ladbrokes suggests the Special One is the favourite to do it, and with La Liga’s second top scorer – ahead of Messi – now leading the line, it won’t come as a surprise.

The Blues finished just short last season, despite a lack of top-class strikers at the club. Costa with Cesc Fabregas sat behind him – well that looks pretty much problem solved.

Liverpool
It’s been a pre-season of ups and downs for Brendan Rodgers so far. He’s brought in some quality to strengthen his squad ahead of the club’s return to the Champions League, but of course he’s lost one of the best players in the world – a man who inspired them into second place last season.

It’s easy to say Liverpool have lost their ‘bite’. But without turning it into a joke, they really have. They’ve yet to convincingly replace the lethal Uruguayan, with only Rickie Lambert really offering any kind of support so far for Daniel Sturridge, and he’s not going to score 20+ goals. It’ll be a tough ask for Liverpool to finish top four this season, unless they unearth another fabulous striker of course.

Manchester City
Manchester City seemed almost unstoppable last season, finishing only one goal short of the most goals in a season record, thrashing Norwich 7-0, Tottenham 6-0, Arsenal 6-3, and Manchester United 4-1 and 3-0 on the way to the title.

Pellegrini’s huge squad is more than capable of repeating this feat, but there is concern they may take their eye off the ball and switch much of their focus towards the Champions League. They’ve had a good pre-season so far dispatching AC Milan and Sporting Kansas City comfortably. Will it be a similar story come August 17, we’ll wait and see.

Manchester United
After a catastrophic season which left them outside the Champions League places, Manchester United will be looking to bounce back under new leader and stern taskmaster Louis Van Gaal. He’ll look to instil the mentality that took his Netherlands side to the World Cup Semi Final, whilst bringing in new faces to his “broken” team will no doubt give them a new lease of life for 2014/14.

Ander Herrera is expected to shine for the Reds, whilst a number of other signings are expected to walk through the doors at Old Trafford before the summer’s out.

Discussion: And Then There Were Five: The Premier League’s Title Race Is Getting Bigger