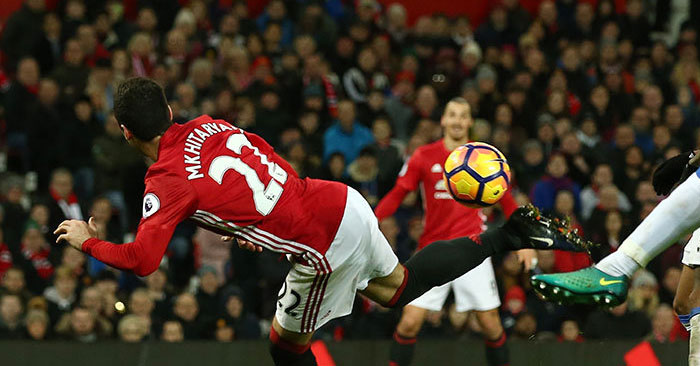 The Premier League is well-known for its top quality players and goals over the years, and there are many goals that will likely live on in the memory forever with some football fans. You could look at the Wayne Rooney overhead kick that he scored a couple of seasons back against local rivals Manchester City that helped Manchester United to a 2-1 victory, or you could look at the goal that Papiss Cisse scored against Chelsea a few years back for Newcastle which gave them a 2-1 victory, which is quite simply, hard to explain. There have already been some spectacular individual efforts in front of goal this season, but which goals have been the best? Below we’ll look at some of the best Premier League goals we have been able to witness in the last month.

Henrikh Mkhitaryan has been a blessing for Manchester United since his arrival from Borrusia Dortmund in the summer, and even though he didn’t get a chance to show his worth in the first quarter of the season, he has certainly stepped up to the plate since by scoring a few goals. One of those goals came against Sunderland in a 3-1 victory at Old Trafford, and it was a goal that is going to be remembered forever.

It’s a goal that is going to be compared with Olivier Giroud’s goal for Arsenal against Crystal Palace on January 1st, and it’s going to be a debate of which one was better for years to come. Henrikh Mkhitaryan has scored some fascinating goals for Borussia Dortmund, so to come to the Premier League in his first season and score what could well be goal of the year is quite incredible. If you haven’t seen it yet, it’s recommended you have a look at some of the reasons why his Scorpion Kick could be the goal of the season.

Olivier Giroud and Arsenal have both been under the cosh in recent weeks because of a couple of questionable performances that set them back in the Premier League title race, but have since bounced back with a couple of victories which has given Arsene Wenger more time to breathe.

Arsenal still look like they can catch Chelsea in the Premier League title race, and goals such as the Scorpion Kick from Olivier Giroud, which got the year off to a great start, could well be what Arsenal need. Henrikh Mkhitaryan scored a similar goal just before Olivier Giroud’s valiant effort, and either one of their goals could quite easily be one of the best the Premier League has ever seen.

With French international Dmitri Payet currently causing all sorts of problems for West Ham by refusing to play for them, it still didn’t stop West Ham from running riot against Crystal Palace in a comfortable 3-0 victory on the 14th of January. West Ham looked surprisingly better without one of their best players in Payet, and it meant Andy Carroll was able to get on the end of a floating cross to scissor kick it into the top corner.

Carroll caught the ball as sweetly as possible and left absolutely no chance for the Crystal Palace goalkeeper to even see it let alone get a hand to it. It’s certainly a goal that will be spoken of for years, and it will take something special for anyone to come up with something better this season, other than the efforts from Henrikh Mkhitaryan and Olivier Giroud.

Bookmaker Ratings suggest we are in for a treat for the rest of the season though, and if you fancy someone else to come up with similar goals to the 3 above, you’ll definitely want to get your bets on it promptly.

Discussion: 3 of the Best Premier League Goals in the Last Month