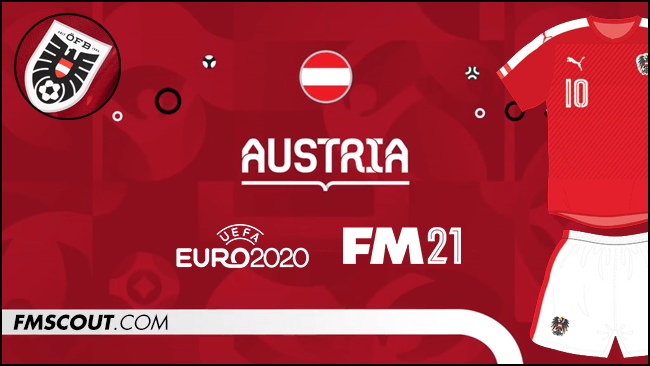 Austria is a landlocked nation in Central Europe with an estimated population of 8.7 million people. It is bordered on the north by the Czech Republic and Germany, on the east by Slovakia and Hungary, on the south by Slovenia and Italy, and on the west by Switzerland and Liechtenstein. Due to the presence of the Alps, Austria's landscape is extremely mountainous. The capital and largest city, with a population exceeding 1.8 million, is Vienna.

Austrian football is under the Austrian Football Association, the ÖFB (Österreichischer Fußball-Bund) which was created in the Austro-Hungarian Empire on March 18, 1904, by a Jewish defender name Max Scheuer. However, tracking back to the history, in 1890 football was introduced to Austria, and in 1900, the first cup competition called Neues Wiener Tagblatt Pokal was established in Vienna.

Subsequently, the Football Federation of Lower Austria founded the country's first football league, the 1. Klasse, in 1911, and became a professional league in 1924 when it changed its name to I. Liga. The national team enjoyed the greatest success in history in the 1930s under coach Hugo Meisl, becoming a strong force in Europe and earning the nickname "Wunderteam” the lethal innovators of beautiful football.

Now it is worth mentioning that back in the 1920s football was a game in which wingers were used primarily, in other words, if you have not had a winger you were predicted to lose. However, the “Wunderteam” came with something special and unique at that time. A startling 2-3-5 formation suggested that scoring against this squad would be simple, but the fact was the opposite.

The philosophy of the team was believed that the national team should be made up of players from no more than two or three teams that play a similar style of football. According to football experts at the time, the players knew each other extremely well, and their communication with the ball was like that of an orchestra.

The success has not been waiting so long and in 1931 the national team beat Scotland and earned themselves a reputation of the first continental European side to defeat this nation. In the European Championship Finals of 1932, Austria defeated Italy to win the title of the best team in Europe. The team has been dominating on the European scene, so the squad thought what about the World cup scene?

The challenge was on, and the Austrian team appeared on the 1934 FIFA World Cup scene. The Austrian team finished fourth after losing 1-0 to Italy in the semi-finals and 3-2 to Germany in the third-place play-off. Despite finishing in fourth place, their true victory was the introduction of a total football which was adopted by the golden team of Hungary or for example, Johan Cruyff later instigated this system in Barcelona.

Many people now have forgotten about the Austrian “Wunderteam”. However, their impact continues to inspire us to stand in amazement and admire a style of football that is probably the finest ever. 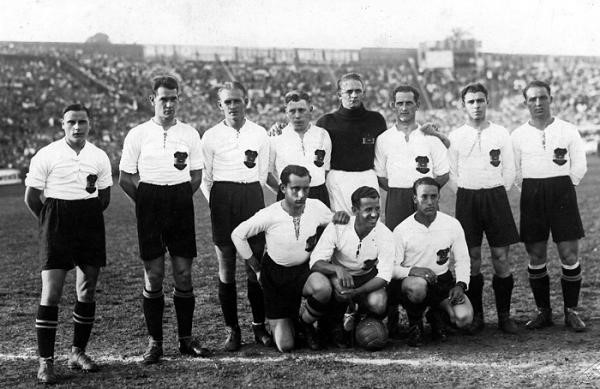 Later the Austrian team followed a good run in the 1936 Olympics in Germany (runners-up), qualified to the 1938 World Cup finals but on March 12, 1938, they were captured by Germany which meant that the German national team represented the Austrian territory. After World War II, Austria was finally again separated from Germany and earned its independence.

The post-war period time was not the most successful for the Austrian team, despite their good start in the 1954 World Cup finishing third after beating Uruguay 3-1. The 1958 World Cup in Sweden was a disappointment for the national team leading not continuing to the next stages.

Later a new national team coach Decker built a brilliant generation of footballers. Austria, however, decided not to compete in the 1962 World Cup in Chile owing to a lack of funds, and the squad collapsed. The sudden end of Austria's post-war glory resulted in a 0–6 loss to Czechoslovakia in 1962, from which several players, including Karl Decker, never recovered.

Then Austria failed to qualify for the 1966 edition World cup which was the first time in history and followed the losing tradition in the 1970 and 1974 World Cup. The 1978 World Cup in Argentina led Austria to go through the group stage however despite the success the team was eliminated in the second group stage finishing in 7th place.

During the 1982 World Cup in Spain, West Germany and Austria met again. It was the last game of the group stage (the other teams played the previous day). Both sides knew that a one-goal victory to West German would send both teams to the next stages and yes you even don’t have to guess that the final score was 1-0 to West Germany when the players passed around the ball for over 90 minutes without any intension to score the second goal. The match became known as the "non-aggression pact of Gijón" resulting in FIFA changing the rules and allowing the last group matches played at the same time.

Continuing into the 1990s the Austrian team qualified for the 1990 World Cup, but then in the 1992 EURO qualifying campaign, perhaps one of the greatest football upsets in Austrian history came by losing 1-0 to the Faroe Islands a group made of amateurs. The Austrian team failed to qualify for the 2002 World Cup and EURO 2000 followed by two huge losses 9-0 to Spain and 5-0 to Israel.

However, during the next years, the Austrian squad experienced a tremendous comeback such as the EURO 2008 run held in Austria. The Austrian team as a hosting country qualified automatically but had a strong group consisted of Poland, Croatia and Germany. The national team did well and draw to Poland 1-0 and lost just 1-0 to both Croatia and Germany.

The Austrian supporters and people in the country saw the development of the national team. In 2014 World Cup we saw the first signs of the new golden generation of the Austrian team when they managed to finish in third place with a 5 win, 2 draws and 3 losses record (17 points).

The EURO 2016 qualifying campaign was brilliant, and the national team finished the group in first place and undefeated. However, the enthusiasm was probably too much for the Austrians and the EURO 2016 group stage ended out to be a terrible nightmare (loss to Hungary 2-0, draw 0-0 with Portugal and loss to Iceland 1-2).

Austria later played for the 2018 World Cup spot however failed to qualify finishing in 4th place. The national team finished second in their qualification group behind Poland which earned them a spot in the EURO 2020 Group C.

According to many critics, Franco Foda is considered the best coach the Austrian national team had (result wise). Foda had a rich playing career appearing in over 400 matches in Germany (West), Switzerland and Austria.

Under Foda's leadership, Sturm Graz won the 2010–11 Bundesliga and the 2009–10 Austrian Cup. In May 2012 he signed a contract with 1. FC Kaiserslautern but after one year he was sacked with an immediate effect. Later he returned to Sturm Graz (2014) and in October 2017 he was announced as a manager of the national team (starting from January 2018).

Franco Foda has been in charge of the Austrian team for over 35 games holding an overall record of 21 wins, 5 draws and nine losses. Not bad for a coach who has been criticised for being excessively pessimistic and result orientated.

The player who recently swapped his shirt from Bayern Munich to Real Madrid will be the key component of the Austrian team. His position in the Foda’s 4-2-3-1 formation is not always stabile.

In all games for club and nation in 2020/21, he played the majority of his time as a central defensive midfielder however he was used also as a left-winger or left-back. Therefore, we can expect that the Real Madrid player will be crucial in the Austrian team as a leader.

Possible the last international experience is expected for Marko Arnautovic. The striker who is well known for his speel in West Ham has scored 21 goals in his 59 appearances in London. Currently at his new Chinese club Shanghai Port he has scored 19 goals in his 30 appearances.

In the national team, he has seen many challenges and since November 2019, he has only made the matchday squad twice, and one of those was as a substitute. However, with the possibility of playing the last international competition and the strike’s ageing, his motivation should be on the top now.

Nevertheless, in fact, we know that he is a good striker, and the Austrian team will expect from him goals, especially if he will be coming from a bench. Marko Arnautovic could be a threat to the opposition's defence.

The RB Leipzig player who has been linked with the transfer talks to Tottenham will be focused to make a good impression.

He has been an influential player for the RB Leipzig team however things went bad for him when he sustained a torn muscle injury at the start of the season, preventing him from playing or training for over a month.

We can expect him to start behind the striker as the false 9 or play on the wings. The link between the former West Ham player Marko Arnautovic and Sabitzer will be the main attacking problem for the defenders.

The Hoffenheim talent is a genuinely exciting player to watch. He's only been with Austria since September, but he's already started nine games in a variety of positions throughout the front four.

It will be exciting to watch this player as his tactical thinking has been compared to a legend such as Michael Ballack. He is one of the young players to watch at the EURO. 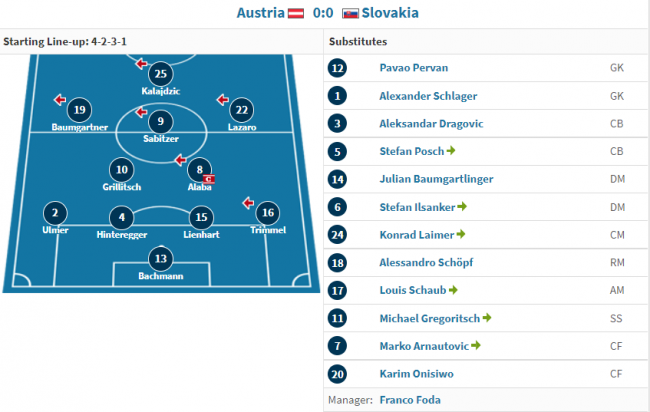 It is expected that the Austrian team will be playing a 4-2-3-1 formation and the last friendly against Slovakia proved this fact. Austria will have enough flexible players to play in different positions (Alaba, Sabitzer).

However, the Austrian side played a majority of their UEFA Nations League fixtures with the 4-4-2 formation and using a 3-5-2 formation in the friendly against England.

I expected that Foda will use the 4-2-3-1 formation against North Macedonia as it will create more attacking opportunities for the team. With the 4-4-2 formation, the game against Ukraine and Netherlands should provide good defensive stability.

I believe that Austria will reach the knock-out stages with the power and talent they have.