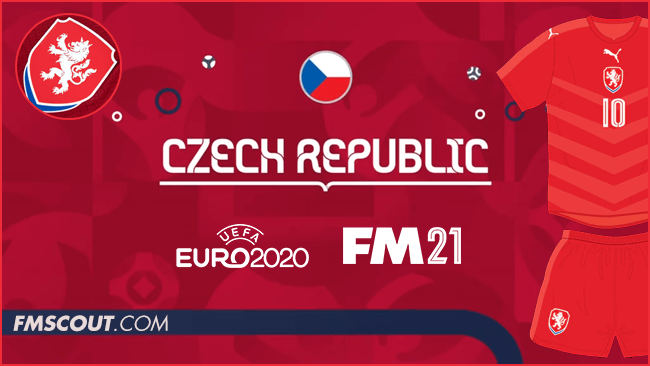 National Background and Past Competitions

The Czech Republic National team has competed in the UEFA European Football Championships six times, whilst the nation also competed three times as Czechoslovakia. The Czechoslovakian team even became European Champions in 1976. 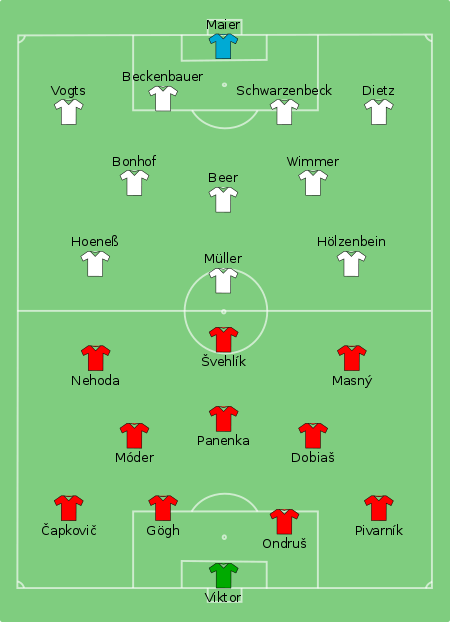 The UEFA Euro 1976 Final was won in dramatic and unexpected fashion by Czechoslovakia. Václav Ježek’s team defeated the West German giants in a penalty shootout after a 2-2 draw. They also beat England, Portugal, and Cyprus along the way, before defeating the Netherlands 3-1 in the semi-final.

Despite West Germany being favourites, with a team consisting of icons such as Gerd Müller and Franz Beckenbauer, it was Antonín Panenka who became a legend that night when he stepped up to take the decisive penalty - delicately chipping it down the middle past the diving goalkeeper.

Notably, this is currently the only penalty shootout in either the FIFA World Cup or UEFA European Championships the German national football team has ever lost. 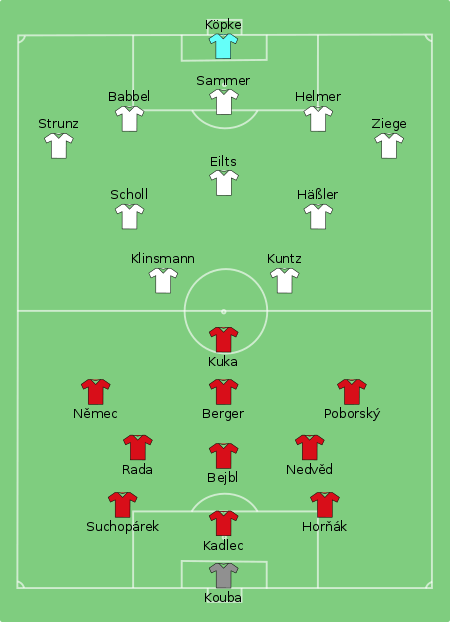 The UEFA Euro 1996 final was the first European Championship since the break-up of Czechoslovakia three years earlier. The Czechs qualified in second place from their group containing Germany, Italy, and Russia; they then defeated Portugal and France to reach the final, where they again faced Germany.

This was seen as the rematch of the final 20 years before, and this time, it was the Germans who were victorious, with the match ending 1-2 after a 95th minute golden goal scored by Bierhoff, who came off the bench in the second half to score a brace.

Since then, a third-place finish in 2004 is the best the Czech national team has managed. In the most recent in 2016 tournament the Czechs failed to qualify from the group stage, coming last in their group.

Czech culture has been shaped by its geographical position in the middle of Europe. Influences from its neighbours, political and social changes, wars, and times of peace all left its mark on the Czech culture.

The country was previously known as Czechoslovakia until the ‘Velvet Divorce’ with neighbouring Slovakia, becoming the Czech Republic in 1993.

The Czech people are largely traditional, especially in the smaller towns and villages throughout the country, and value hard-work and their families. Czech domestic culture revolves around the family unit, with many universities and colleges even closing on weekends so students can return to their families.

Czechs tend to prize practical skills above ‘soft skills’ with trades passed down the generations. In general, Czechs tend to be reserved and can appear distant until they feel comfortable. This trait is reflected in the language, which uses formal and informal forms to address people.

The Czechs are proud of their language and its perceived difficulty (the U.S. Foreign Institute ranks it the second most difficult language to learn) and tend to revel in their ability to master it.

Of course, like any people, they know how to relax and have fun; Czechs are known to have the highest consumption of beer per person of any nation in the world. 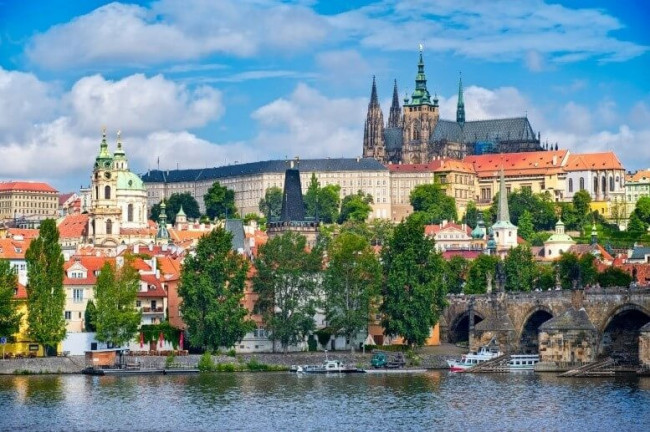 I visited the Czech Republic’s capital city, Prague, myself in 2015 and fell in love with the place. The people were friendly and clearly proud of their country and customs, fitting as Prague itself is a city steeped in history, overlooked by a 9th century castle and filled with historic sites such as the Charles Bridge, Old Town Square with the Prague astronomical clock, the Jewish Quarter, and Vyšehrad.

Prague was even the capital of the Kingdom of Bohemia and the main residence of several Holy Roman Emperors. However, there are also many modern beautiful areas such as Petřín hill. The food and drink is well priced for British tourists as well, and I enjoyed a selection of Czech beers – perfect to wash down local dishes such as Schnitzel.

Prague is also the home of two of the Czech Republic’s largest football teams: Slavia Prague and Sparta Prague, who compete in the Czech First League. Many of the Czech international players have played for one of these two teams in their careers, and the current crop of players boasts a large contingent of Slavia Prague graduates.

Jaroslav Šilhavý is a Czech Republic’s national team manager and a former international player, who made a total of 465 topflight appearances spanning the end of the Czechoslovak First League and the beginning of the Czech First League making 465 appearances - a Czech league record.

As a manager, Šilhavý won the 2011–12 Czech First League with FC Slovan Liberec as well as earning a second Czech League title with Slavia Prague in the 2016-187 season. He has also managed the likes of Czech Kladno, Viktoria Plzeň and Dynamo České Budějovice throughout his career.

Šilhavý became the Czech manager in September 2018 and this will be his first major international competition. Due to his history in the Czech Republic game Šilhavý is well respected, and he has said he aims to emphasise ‘communication with players and trust’.

Šilhavý sets the team up in a standard 4-2-3-1 formation with an organised defensive shape, largely looking to get the ball into wide areas through the wingers or fullbacks, utilizing the half-space to fashion crossing opportunities. 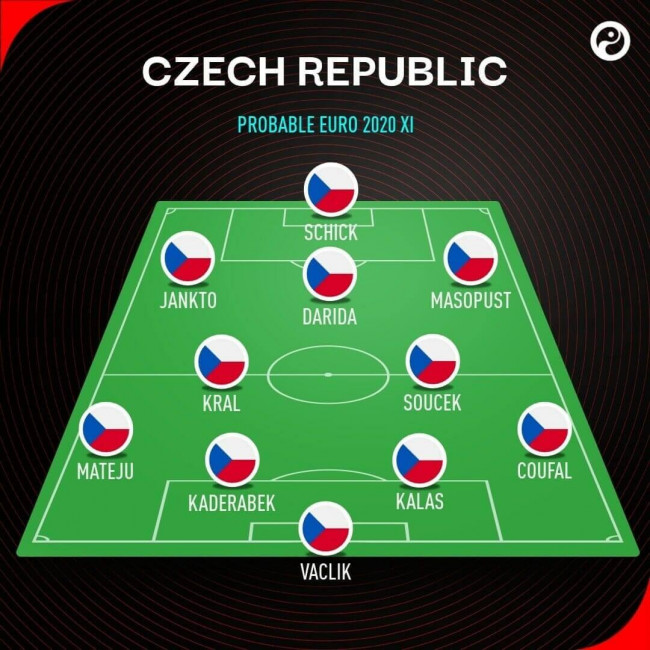 The fullbacks are very dynamic and push up high into opposition territory. The midfield pivot of Kral and Soucek is very strong defensively and the two compliment each other well.

Both over 6 foot tall and defensively strong, Soucek especially is aerially dominant in both boxes (where he has a knack of arriving late in the penalty areas to poach goals or get on the end of crosses), whereas Kral possesses surprising technique and dribbling ability.

In front of them is a typical ‘number 10’, charged with getting into the box or unlocking defences with his passing.

The Czech wingers (usually Luka Masopust and Jakub Jankto) are also comfortable both creating chances – largely through crosses into the box – as well as finishing them.

Finally, the striker is usually a more traditional target man type, like Patrick Schick, though the dynamism of Matěj Vydra is sometimes preferred. 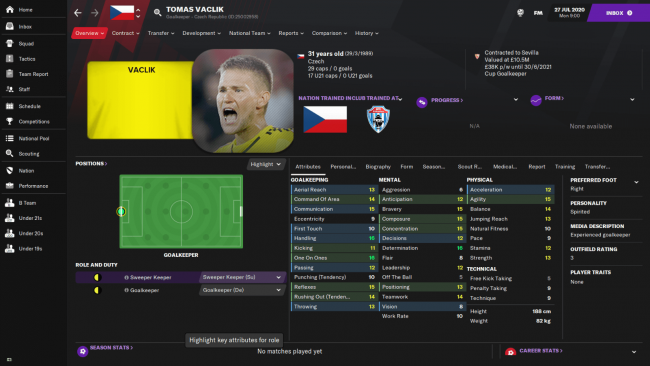 Tomáš Vaclík is the Czech number 1, and will be confident heading into the Euros thanks to a strong season at club level with Sevilla, who secured a fourth place finish in La Liga and reached the Champions League round of 16.

Whilst acting as a sweeper keeper, Vaclík excels with shot-stopping – particularly in one-on-one situations. One aspect of his game which could be considered a weakness is his passing range, however playing for the international side he should not be on the ball enough for this to really hamper the side. Overall, he is an important member of the squad and reliable between the sticks. 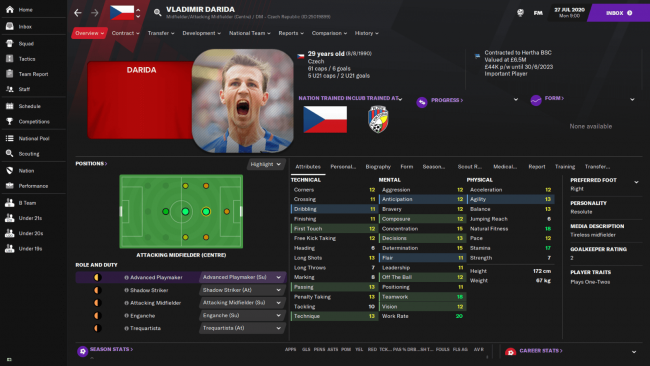 Vladimir Darida of Hertha Berlin is player who will likely fill in the no. 10 role, charged with providing creating, finding space always and threading clever through balls to the attackers. He is also very versatile and can play throughout the midfield.

Like many of the Czech players, he possesses a strong work rate and stamina, and as captain his leadership will be essential as he will likely set an example for the rest of the team. Importantly, Darida provides experience for what will be the 30-year-old's third Euro finals appearance. 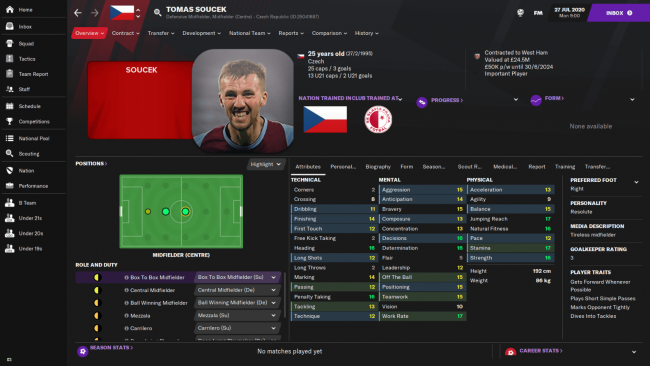 Tomáš Souček is another member of the squad coming off a strong season after securing a 6th place spot in the Premier League with West Ham. Souček is the engine of the Czech team, possessing extreme stamina and a work rate to match.

He is a very strong aerial presence and gets into both boxes to make clearances or score goals. He is also vice-Captain of the squad and former Slavia Prague captain so is yet another leader in the dressing room. 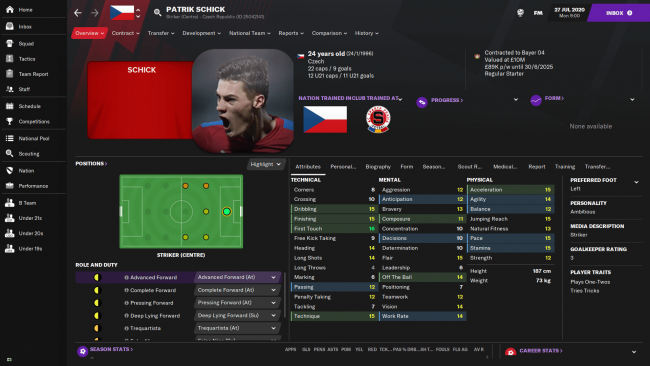 Patrik Schick has had a mixed season with Bayer Leverkusen after struggling to make a big impact at Sampdoria and AS Roma in Italy's Serie A, though he will be hoping to put that behind him with a strong European campaign.

The Czech striker possesses the size and stature to attack crosses but can also pose a threat with the ball on the floor with his speed, technique, and dribbling ability. Schick was the team’s top goal scorer in qualifying with four goals. 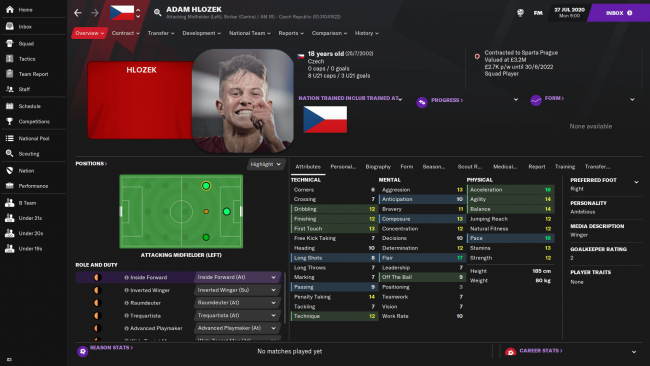 Adam Hložek is one to watch at this tournament. Whilst not currently a key player, this 18-year-old winger has a huge future ahead of him. Hložek, the youngest goal scorer of all time in the Czech Fortuna Liga, scored four goals in the first half in Sparta Prague’s final game of the season, showing his intent to fire his way into the Czech first eleven.

Capable of playing on the left wing or up-front, and already 6’1, this wonderkid possesses all the physical and technical abilities to live up to his undoubted potential.

Chances in the Euros

The Czech Republic are in Group D with England, Croatia, and Scotland. This is a deceptively difficult group, and it is somewhat difficult to gauge who will qualify and in what position.

England and Croatia are likely the favourites to qualify, but of course there have been many surprises throughout the competition’s rich history, and the Czech can be considered as dark horses to progress.

One way to predict how the Czech’s will fare is to look at the recent meetings between the teams, below is the results of the last time the Czechs played the other nations in their group:

Overall, these results suggest the group will be tight and difficult to call, though I would not be surprised if the Czechs managed to scrape through the group in second place.