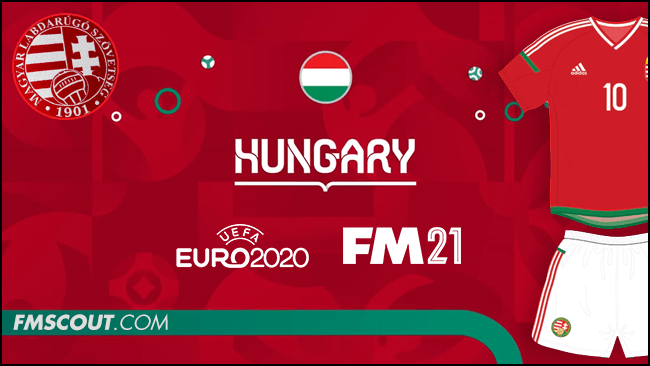 Hungary is a relatively small Central European nation of around 10 million inhabitants. Although the number of ethnic Hungarians in the surrounding nations of Romania, Slovakia, Serbia, Ukraine etc. Means this number swells to around 13 million people who consider themselves as Hungarian in the region.

Its capital Budapest is one the finest cities in Europe, with stunning architecture, the mighty Danube flowing through it, and a vibrant scene that make it one of the most popular city break destinations in the region (if you haven’t been you really should!).

Once a superpower in Europe in the times of the Austro-Hungarian empire, Hungary has over the last 100 years or more seen its borders shrink to less than half of its original size. After the Second World War Hungary became part of the Soviet Bloc, a time of oppression and fear.

These factors help contribute to what is known as Hungaro-pessimism, there is a widely held belief that Hungarians are the most pessimistic people in the world. And for many, up until relatively recently, that pessimism certainly spread to their view of their football team.

There was a time however, in the 1950’s and 1960’s, that it could be argued that Hungary had the greatest football team in the world.

The list of accolades the Hungarian team achieved over that time rightly has them lauded as Aranycsapat – the Golden Team.

None of us are old enough to have seen players from that era but their names still live long in the memory, not just in Hungary but beyond.

The likes of Sándor Kocsis, Flórián Albert (Hungary's only Ballon D’Or winner) and of course, the mighty Ferenc Puskás (you’ve heard of the Puskas award right, well, yeah, him). Puskás scored 84 goals in 85 internationals, a strike rate than not even the likes of Cristiano Ronaldo or Pele can match.


But from this proud position Hungarian football took a mighty fall. In the 70s and 80s they qualified for 3 World Cups, but never made it past the group stage. They have failed to qualify for any World Cups since 1986. In the European Championships after finishing 4th in the 1972 tournament they failed to qualify again for over 40 years.

However, things started to chance in 2015, when in a playoff Hungary scored a famous win over Norway winning 1-0 in Oslo and 2-1 in Budapest to qualify for their first major finals in 30 years, Euro 2016.

It was widely expected that they would be the whipping boys of a group containing Austria, Iceland and Portugal. That turned out not to be the case though, a 2-0 win over local rivals Austria was followed up with a draw against Iceland, and an entertaining 3-3 draw with Portugal which meant they topped the group and made it through to the round of 16.

Unfortunately, they met a very strong Belgium side in that round so the dream was over, but this was the best performance from a Hungarian team in generations.

They failed to qualify for the 2018 World Cup, with some pretty embarrassing results along the way (losing to Andorra for example!) and actually their Euro 2020 qualification performance was pretty dismal too, finishing 2nd bottom of the group.

But the new Nations League playoff path gave them a 2nd shot of qualification. It looked to be a bit of a long shot as first they had to travel to Bulgaria, but managed to secure a 3-1 win.

This led to a playoff final match against Iceland. Trailing 1-0 going into the 90th minute things looked bleak, but 2 very late goals from Loic Nego and Dominik Szoboszlai turned the match on it’s head and qualification was secured. 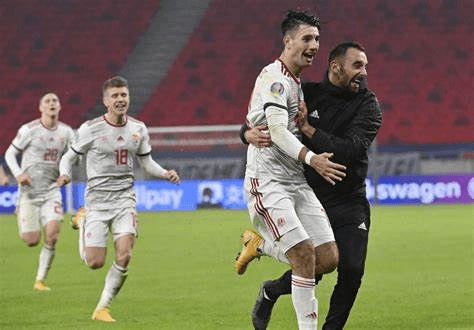 Dominik Szoboszlai celebrates after scoring the winner against Iceland

Hungary’s current manager is an Italian named Marco Rossi. A journeyman as a player, he started his management career in the Italian lower leagues.

He came to prominence in Hungary having taken charge of Budapest Honved for two spells, during the 2nd of which he led Honved to their first title in many years. Within 2 years (after that dreadful WC 2018 qualification campaign) he was offered the chance to lead the national team.

The Hungarian squad is not brimming with household names, in fact around half of the squad still play their club football in their home nation in what in all honesty is not a great league. However, they do have a number of players who feature regularly in the Bundesliga, most notably at RB Leipzig. 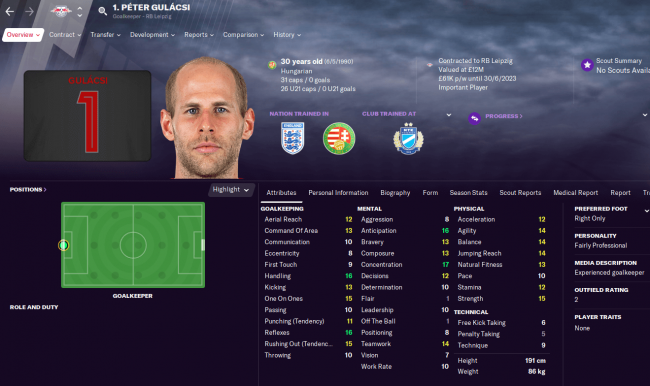 Péter Gulácsi is the first-choice goalkeeper, and someone expected to be kept pretty busy this summer. After an unspectacular start to his career at Liverpool his career was revived by a move to RB Salzburg, and the inevitable move to RB Leipzig that followed. 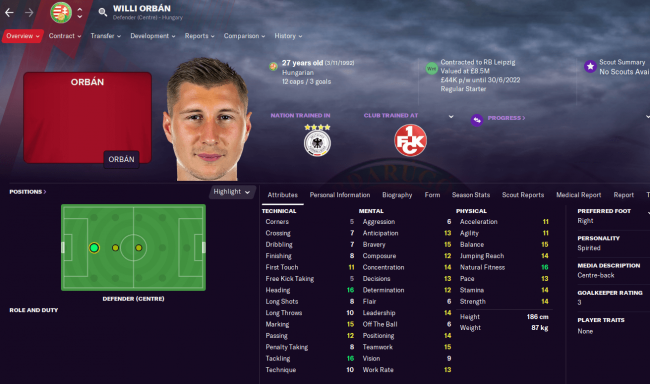 Also with RB Leipzig, Willi Orban will be expected to lead a defence which will have to be pretty organised if Hungary are to progress in the tournament. He may not have the greatest pace, but he is solid, strong in the air and in the tackle and brave as they come. And he’ll need to be! 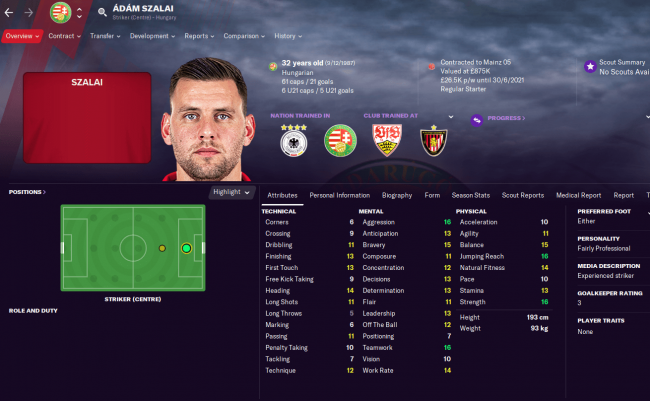 Team Captain is Ádám Szalai, and old school centre forward for whom this will surely be his international swansong. What he lacks in pace he makes up for in strength and heading ability. Hungary will rely on him to fight for and hold up the ball, allowing more creative players to feed off his hard work.

He’s far from a natural goalscorer, but that not what his role in the team is all about. He’ll be an outlet ball when the defence is under pressure, a threat from corners and generally a physical nuisance to opposition defenders.

UP AND COMING PLAYERS 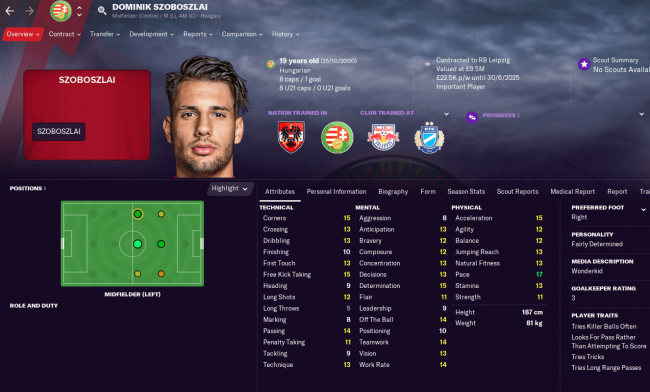 Of course, one of the most talked about Hungarian youngsters in recent years is Dominik Szoboszlai. A prodigious talent who came through the youth system at RB Salsburg, he has now made that well trodden path to RB Leipzig in spite of serious interest from European giants.

A huge threat from free kicks, he also possesses great pace, serious work rate and a superb range of passing. He has the potential to go right to the top. He’s yet to play for Leipzig though, due to a groin injury sustained just after his move, but he is back close to fitness again now, and expected to be fit and available for the Euros.

Definitely one to watch. 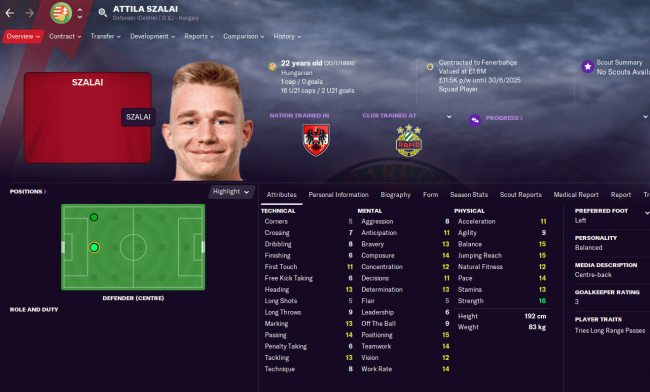 Another player to watch out for is Attila Szalai, a young centre back of whom great things are expected. He moved at a fairly young age from Hungarian to Cypriot football with Apollon Limassol where he performed well enough to get called up to the national team.

His form over the last 18 months was enough to earn him a big move to Fenerbahce, where over the last few months he has been an absolute revelation. He has 3 goals in 18 games in Turkey, and has become a mainstay of the team already.

Don’t be surprised if in another couple of years you see much bigger clubs again coming in for him. Strong, brave and another threat in the air at set pieces he is for sure one to watch!

With the manager being Italian, it should perhaps not be a surprise that Hungary tend to play with 3 at the back, with a DM sat in front of that 3 (normally Adam Nagy who plays at Bristol City).

An example of this formation can be seen in the set up they used in a recent 3-3 draw with Poland.

The 2 wingbacks will certainly more defensively minded than an attacking outlet, and the likes of Szoboszlai, Kleinheisler, Kalmar etc will be expected to shuttle around all areas of the pitch to try and provide some width.

Being able to counter-attack quickly and effectively and getting bodies up and around Ádám Szalai will be vital for Hungary to provide any kind of attacking threat.

Much as I would like to think otherwise, it’s going to be a huge challenge for Hungary to not finish bottom of their group. It’s a real group of death for them, containing Portugal, Germany and France.

One potential saving grace though is that they have home advantage in their opening 2 games, as Budapest is one of the host cities. They have a sparky new stadium in the Puskas Arena, and will be hoping for enthusiastic home support for sure.

They’ll also be hoping to catch Ronaldo and Portugal on an off day in their opener, and France travel to Budapest a few days later. If they are relying on their last game to get through to the next round, it’s a tough ask as they have to travel to Munich to face Germany.

All in all it looks like a tough assignment, but everyone thought their 2016 group was tough also, and they topped it. In football anything can happen right!

It’s been widely noted in Hungary that France are calling up some of their old guard such as Karim Benzema, while Germany are also bringing in the likes of Thomas Muller.

It’s claimed that this is because those countries are scared of facing Hungary, and need to coax those players out of retirement – however this is being said very much with typical Hungarian tongue in cheek humour!!