Italia ‘90, Roberto Baggio’s missed penalty in ‘94, Fabio Grosso’s extra time winner and winning penalty in 2006, Marco Materazzi’s altercation with Zidane. Over the years, Italy have had many memorable impacts on international football’s biggest stages, so it was a gargantuan shock when they failed to qualify for the World Cup in Russia in 2018.

What had become a nation synonymous with the upper echelons of the game suddenly found themselves in disarray and somewhat lost with their path ahead. It was clear that the players trust with manager Gian Piero Ventura was wavering and a new man at the helm was required.

So, it was former Inter Milan and Manchester City manager Roberto Mancini, who would come in to awaken a new dawn for the Italian national team, with the intention and desire to get back into the biggest stages of all, starting with the European Championships, be it a year later than intended. 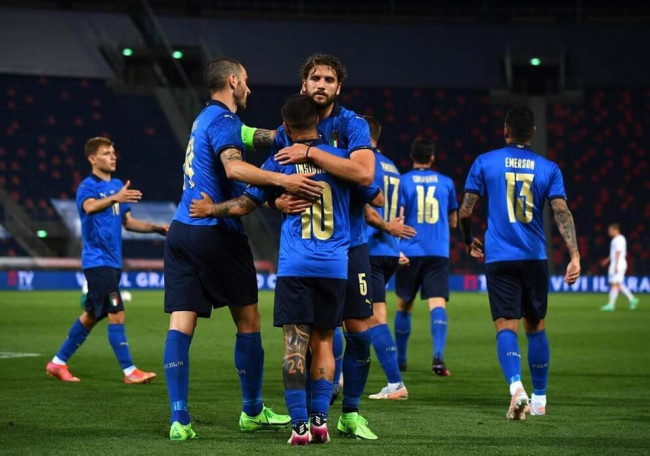 Of course, the Italians are no strangers to set backs, especially when you look back at the Calciopoli scandal that rocked Serie A back in 2006 which saw Milan, Fiorentina and Lazio fined as well as being deducted points and Juventus relegated Serie B for their parts in the match fixing scandal.

However, this set back didn’t deter the national team who would go on to win the 2006 World Cup against France, so it comes as no surprise that the international tournament hiatus of 2018 was swiftly brought to an end with qualification to Euro 2020.

Despite a patchy first 5 or so games with the Azurri, Roberto Mancini has led the Italians on a 27-game unbeaten streak which includes a perfect 10 out of 10 wins in the Euro 2020 qualifying campaign.

As a player, Mancini played a support striker but perhaps somewhat surprisingly, his management style has often predominantly been a bit more pragmatic and defensively sound.

Recently, however, that seems to have changed in recent times with the Italian opting to call up and use an array of technically gifted, and young players to the national setup. Despite not necessarily being regarded as a top tier manager along the likes of Guardiola, Klopp et al, Mancini has accumulated a decent amount of silverware along the way.

Now after guiding his home country to the Euros, Mancini now seems primed to add international silverware to his honours list.

With the deadline now passed, the final 26 players have been announced and there are a couple of surprise inclusions.

With Romagnoli being injured for most of the season, there was an opportunity for a few to fill the backup Centre Back slots behind the elder statesmen of Bonucci and Chiellini, but it was newly naturalized Rafael Toloi who was selected ahead of Gianliuca Mancini to join the likes of Acerbi and Bastoni as squad options.

The former Brazilian obviously doing enough in a better Atalanta aside as well as being an experienced member at 29 years old to get the nod over the Roma defender.

As you can see here from Mancini’s FM 21 attributes, he could be considered to be unlucky to miss out on a place in his namesake’s 26 man squad. Another player to miss out and one that could consider himself unlucky is Moise Kean, the on-loan PSG forward, who missed out on a spot in the squad to Sassuolo youngster Giacomo Raspadori, who’s had somewhat of a break out season for the Serie A side, going on to make 27 appearances and scoring 6 goals.

What is noticeable with Mancini’s selection is the amount of like for like players he has at his disposal. The likes of Locatelli, Jorginho, Verratti and the exciting Barella, are all adept at filling in any of the positions within midfield.

The wide players, who would be expected to operate as inside forwards or wingers also have similar traits with Berardi and Bernadeschi being able to slot in for Chiesa and Insigne with ultimate ease without any disruption to the teams attacking flow.

Up front, the Italians have two formidable pressing forwards in Ciro Immobile and Andrea Belotti, giving the team an attacking threat, whoever leads the line.

It is widely expected that Mancini will pursue with the 443 that was so effective in qualifying with the attacking full backs of Florenzi and Spinazola providing the width. 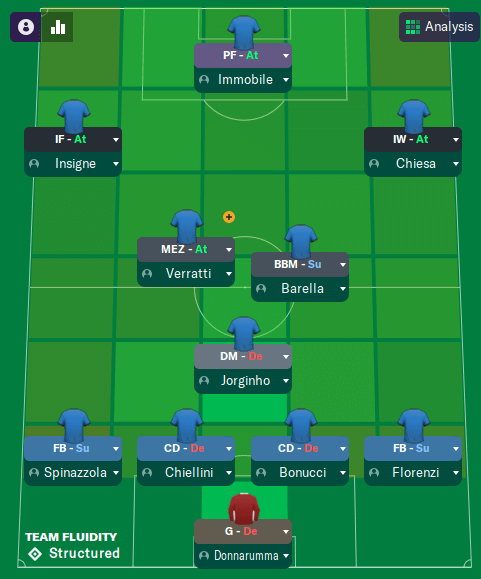 The legendary centre back pairing of Bonucci and Chiellini will marshal the defence in front of the imposing Donnarumma in goal, whose uncertain future will hopefully for the Italian’s sake, not cause the young shot stopper to be distracted over the coming weeks.

With Stefano Sensi being ruled out of the squad despite being originally selected and then replaced by Matteo Pessina, Newly crowned European Champion and Chelsea midfielder, Jorginho will likely be the deep lying playmaker as well as the chosen penalty taker for the Italian side.

Ahead of him will be the tenacious box to box midfield pair of Nicolo Barella and Marco Verratti (fitness permitting), who are able to pop up with the odd goal or two as well coming from deep while also be able to help fill the half spaces further out wide when the inside forwards such as Berardi and Insigne come inside.

It is fair to say that this could be the Inter Milan Box to Box midfielder’s tournament. The 24-year-old is coming into the Euros off the back of a stellar season for the newly crowned Serie A champions where he was integral to the Milan side’s success.

A classic all round midfield player, Barella has the luxury of playing for his national side pretty much as he does for his club side. With 5 goals in 23 appearances, Barella poses a threat going forward as well as in midfield and his teamwork and work rate are integral to Italy’s style of play.

The diminutive inside forward from Naples, is one of the main attacking threats in the Italian squad. Despite his small stature, Insigne is a constant menace and comes into Euro 2020 off the back of his highest ever goal involvement season, where he contributed 19 goals and 4 assists for his hometown side.

Not a prolific goal scorer for his national side, Insigne has actually scored half of his 8 international goals in his last 11 appearances, with the latest coming on his birthday in the recent warm up game against the Czech Republic.

At 30 years of age, the little maverick finds himself as one of the older players within the squad and as the captain of Napoli, it is likely he is going to be one of those players expected to step up to the fore in this competition and is definitely a player who could take the Euros by the scruff of its neck with the potential to be the player of the tournament.

One of the players who will be highly expected to be in among the top scorers of the tournament is Ciro Immobile. The Lazio Centre Forward who has 6 goals in his last 11 Italy games is the spearhead of Roberto Mancini’s side.

With fantastic work rate, pace and finishing, Immobile is almost the complete striker, although there are some question marks over his heading ability, which may be a cause of concern but if Immobile can replicate his Lazio form, where he has scored 123 goals in 177 match Italy will have a fantastic chance of going all the way.

Italy finds themselves in Group A with Switzerland, Turkey and Wales and would undoubtably fancy their chances of extended their current 27 game unbeaten run. With every game for the Italians being played at the Stadio Olimpico in Roma, home advantage could definitely be something that benefits the Azurri in the first three games. 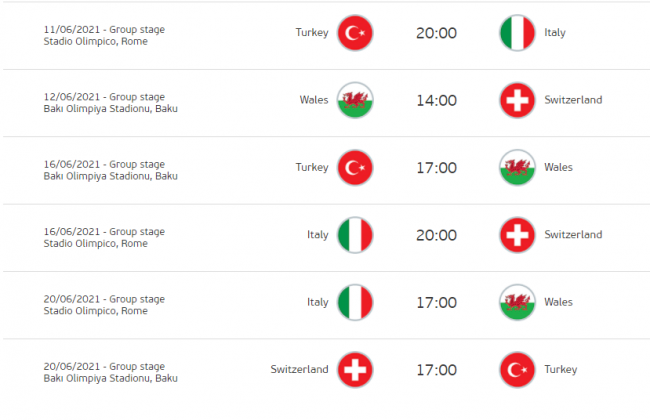 With the team coming into Euro 2020 on the back of a long unbeaten run coupled with being placed in what could be considered one of the easier groups, it is fair to say that they have the potential to go far and potentially win the tournament.

The whole squad has something to prove to the rest of Europe, after the disaster of not qualifying for the 2018 World Cup in Russia and the team now has a quality blend of youth and experience with something of a more progressive and attacking philosophy, that is not usually associated with Italian sides of the past.

Much like a phoenix rising from the ashes, the once adored and feared Stallion is galloping forward with intent and purpose, with glory in its sights and the dark horse that is Italy is about to be unleashed once more on one of the biggest international stages.