Mentioning your first World Cup is a sure-fire way of revealing your age within the football community. In 10-15 years’ time, it is amazing to think of kids remembering North Macedonia playing in their debut tournament the same way many of us watched Italia 90 and for the very last time, watched Yugoslavia compete on the world stage.

The Yugoslav Wars in 1991 brought about the break-up of the Yugoslav federation in 1992, a mere 10 days away from the European Championships in Sweden – giving us Denmark, one of the greatest fairy-tale stories of all-time.

When you look at the squad from 1990, names like Davor Suker, Robert Jarni, Robert Prosinecki and Alen Boksic catch the eye, but let us not forget the only Macedonian in the 23, the Yugoslav no.9, Darko Pancev. 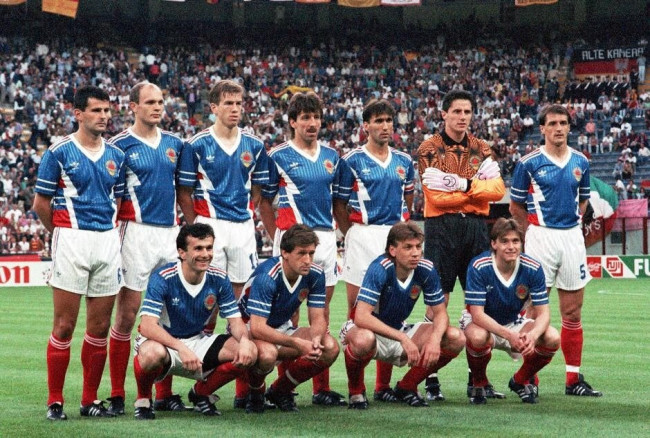 Look at the North Macedonian record books and you won’t see Pancev’s name mentioned against any big achievements. He only made six appearances for the country of his birth, but he is arguably still the greatest forward to ever come out of the country.

He was part of the Red Star Belgrade who won the European Cup - something only managed in Football Manager these days - and then, on the back of a European Golden Shoe he finished runner-up in the Ballon d’Or in 1991, earning his spot as one of the all-time greats As far as history goes, 2020 was supposed to be the year North Macedonia made their mark on modern football. Four years earlier with a FIFA World Ranking of 162, appearing in an international tournament was nothing more than a dream, but their rise has been one of Europe’s best stories.

From Srecko Katanec in 2006 to Ljubinko Drulovic in 2015, nine coaches combined to help North Macedonia pick up 23 wins from 89 games. Igor Angelovski took charge in November 2015 and something clicked. Fifty games played, 23 wins, only 16 draws and qualification for the 2020 Euros.

It was in 2017 when the tide started to turn, only three wins in qualification for the 2018 World Cup wouldn’t have registered on many radars, but friendly wins over Belarus and Norway showed potential.

On the back of Goran Pandev’s goals, promotion from the UEFA Nations League D group followed. Four wins from 10 wasn’t enough to secure automatic qualification to the Euros, but it did push them into the playoffs.

Kosovo would fall 2-1 in Skopje, but then Angelovski’s men would face the challenge of Georgia in Tbilisi. Step forward Pandev, Macedonia’s top goalscorer, poking the ball beyond Giorgi Loria, making history by scoring the only goal of the game in the 56th minute.

There is no reason for North Macedonia to fear anyone in Group C, especially after their amazing 2-1 win over Germany in Duisburg. More of the same come June 13th, please.

Igor ‘Mrme’ Angelovski (born 1976) is a North Macedonian manager who had little in the way of a playing career. He rose up the managerial ranks and claimed national fame by guiding Rabotnicki to a league and club double in 2014. He would go on to defend the domestic cup before leaving the next year for the national team job. 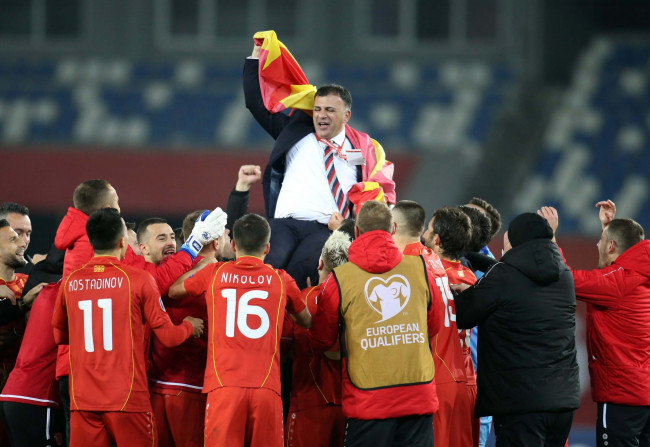 Viewers are in for a fun ride as Angelovski’s philosophy, “is always to play offensive football, that allows the fans to enjoy the game. I want to score more than the opponent.”

Only 45 years old, he is still relatively new to the coaching world, this being only his second job, and it looks like he is putting faith in both his and his player’s ability this summer. “We have to try and stick to the same strategy, but we will play strong teams. It is a pleasure to participate, and the goal is to improve. In football, you never know.”

This is the 26-man squad North Macedonia registered for the 2020 European Championships.

This is not a team of instantly recognisable names, but with players gracing Seria A, La Liga, Bundesliga and the Premier League, they are also not a team of inexperienced nobodies.

On paper, it’s an aging squad, but with nine players holding over 40 caps each, they are experienced, and the recent success has brought a togetherness and understanding. There is a 16-year age gap between two of their best players, 37-year-old Captain, Goran Pandev and Napoli’s 21-year-old Elif Elmas.

NOTABLE PLAYERS IN THE SELECTION

What an amazing achievement this will be for the Genoa forward. The opening group game against Austria will be his 120th appearance for his nation, and if he hits the net this summer it will his tally to 38 and beyond, extending his lead over fellow forward Aleksandar Trajkovski – who has 18 goals.

Age ain’t nothing but a number according to Angelovski, who has no issues with putting his faith in a veteran upfront. “It is not a problem. Pandev has great experience. I know he is 37, but, normally, he is in good physical shape. His level of quality is very important to the team of North Macedonia.”

Having played for Inter Milan, Lazio and Napoli, the forward is well known to Serie A fans and despite being the wrong side of 35, he’s still managing to play 25/30 games for Genoa, finishing with seven goals this season.

Any pace he had has long gone, but his technical abilities are still second to none. There’s nothing he hasn’t seen and his ability to read the game, moving in the shadows at the right time, he is still a danger to all defenders.

A player Angelovski will know better than most in his squad, it was at Rabotnicki in 2015 where the now international coach convinced 12-year-old Elmas and family to join their youth team. Three years later and the likes of Heerenveen in the Eredivsie were keeping close tabs.

“There was some strange kind of magic in him,” Angelovski says. “An unbelievable energy, an X-factor at such young age that attracted everyone. An excellent reading of the game, a master of assists and a phenomenal finish.”

At just 16 years old he made 33 appearances for the Rabotnicki first team, popping up with six goals and seven assists. It was then no surprise when he made the Under-21 squad for the Euros in Poland at just 17. By then Manchester City, Borussia Dortmund and Fenerbahce were all courting the bonafide wonderkid.

Only two years would pass before there was another bidding war, with Napoli fending off the advances of Spurs and City to sign him for €16m.

Elmas winning goal against Germany in the recent World Cup qualifier gives you a glimpse of what he is all about, ghosting into the box to show great composure and technique, deftly flicking the ball into the back of the net. Cultured, intelligent, skillful, everything you need to become a breakout star this summer.

As soon as someone mentions the phrase ‘free-kick specialist’, and ‘Lionel Messi from Levante’, it’s hard not to get excited about a player. Enis Bardhi is that man – although a positive Covid test has put a cloud over his involvement this summer.

He nearly fell away from football when his family moved to Sweden, but at 17 he was spotted by Brondby’s academy, leading to a call-up to the Under-21 Championships in 2017. His performances in Poland caught the eyes of the Spanish side and during the 2017/18 campaign, only the Barcelona superstar managed to score more direct free-kicks than Bardhi.

This season, although he’s made 26 appearances, the 25-year-old has only found the net once in the league, but the quality from dead ball situations remains, and his boss backs him to be a vital cog for his team this summer, “He is instrumental. I believe in him and I hope that his problems with injury will end. He is one of the key players.”

He may not have started a single game for VfB Stuttgart in the Bundesliga this season, but with 14 substitute appearances for the German side this 20-year-old winger has the chance to spring to life this summer.

It was only the week before the tournament when he scored his first international goal, and it was one to remember. Cutting in off the left-flank, the winger beat two men before smashing a right-foot drive powerfully into the corner. The sort of strike that makes you sit up and take notice.

Born in Skopje, he moved to Germany as a three-year-old, and after playing at Hansa Rostock and Magdeburg, he got his opening in the first team at FC Koln in 2018. In January 2020, he joined Die Schwaben, and has slowly begun to make his mark.

His international debut came at 16, holding the record as the youngest ever to feature for the senior team. His appearances haven’t quite materialised, but he is no longer a teenager and will look to add to his three caps and explode on the biggest stage.

What has been successful for North Macedonia, is their three/five-at-the-back system, which can be slightly tweaked depending on who plays up front with Pandev, and where Elmas is asked to play. 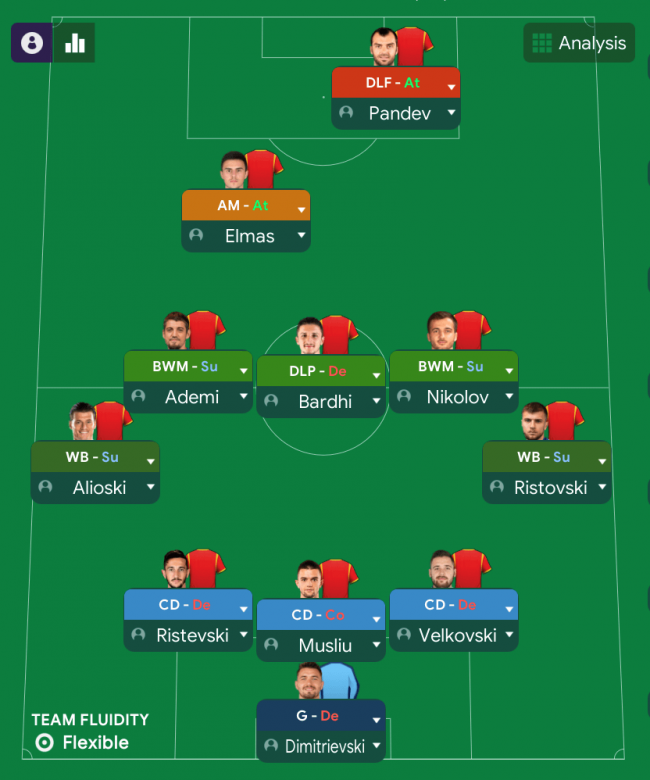 Playing Elmas deeper is an option Angelovski has used in the past. There could be times when they could also go 4-5-1 with Pandev up on his own. 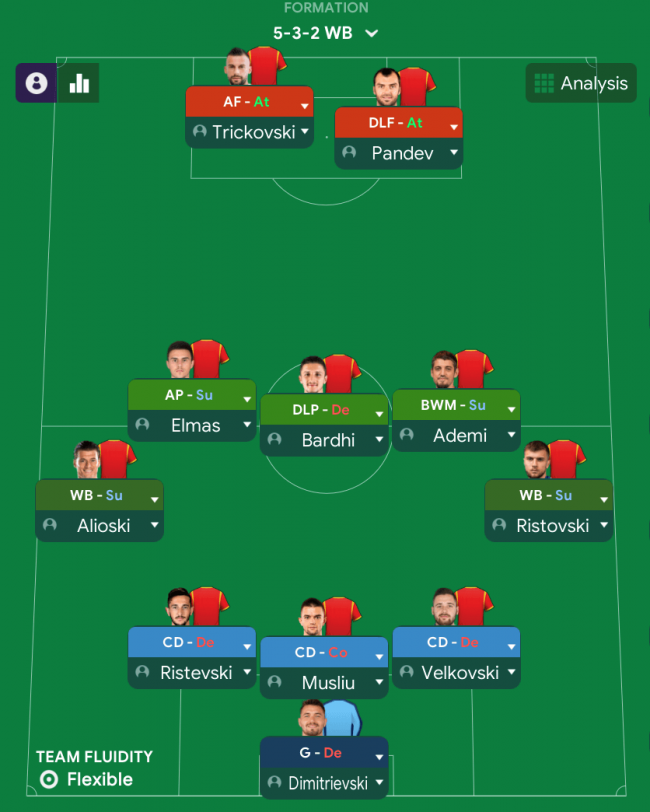 No one will give North Macedonia a chance of making it out of Group C. Netherlands are strong favourites and both Austria and Ukraine have more experience at this level, but rule them out at your peril, and you can sense the thought of upsetting the big boys appeals to Angelovski,

“They [Netherlands] are the favourites indeed, but the other two national teams are also top. We respect them. We will play to get good results against them. We see possibilities. Why not? In football, everything is possible.” Taking on Austria in the opening game gives the underdogs a great chance to shock the group. Especially with Ukraine up second, knowing four points could be enough to advance.

Their fate could be sealed before they go up against the group favourites and that’s how underdogs cause an upset. If they go into the final group game with nothing to lose, don’t rule them out earning a point.

Starting as favourites to come bottom isn’t a bad thing, the only way is up, and that feels like a theme this summer for North Macedonia.

Getting out of the group is a long shot, but it’s a possibility. These minnows have a history of picking up some big wins when the odds are against them. Win one and opinions will quickly change.

What Pandev has left in the tank is going to be a huge factor. Does he have one big summer left? How bold Angelovski goes could be key, if he goes with Elmas in the midfield, giving them more fire power up top, could be what they need, but the temptation will be there to load the middle of the park and look for a big of magic from the front two.

The goal will be to give a good account of themselves, qualification out of the group would be the perfect summer.