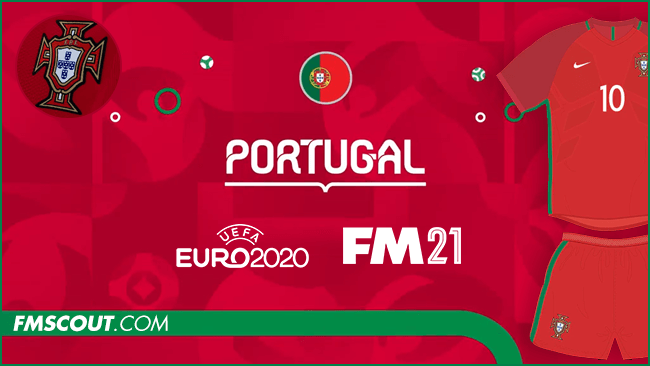 Welcome to FM Scout’s preview of Euro 2020! This time, we’re looking at Portugal, the winners of Euro 2016 in France, and one of the most colourful sides in international football.

The reigning European Championship holders have a curious record when it comes to tournament football. Their “Golden Generation” of the late 1990s and early 2000s failed to deliver any silverware – instead a series of incidents unsettled their tilt towards triumph. In 2000, eventual champions France knocked them out in the semis on a Golden Goal. In 2004, on home turf, they were shocked in the final by underdogs Greece.

Portugal have a lot in common with England in the early 2000s – except they got far closer to ending their wait for glory, only to lose out at the very last. This Portuguese team actually looked like winning something.

They finally did win in 2016; Cristiano Ronaldo in his prime leading the Seleção to a maiden major championship triumph. They turned over Croatia, Poland and Wales en route to the final, where Eder’s extra-time goal was enough to shock France and lead the Portuguese to a famous win.

Portugal is not a huge country; with a population of just over 10 million, they do well to compete so strongly with the likes of Spain, England and Germany. It’s a country with a proper identity; full of culture and passion.

They celebrate their history - every year, the Santos Populares festival takes over in the towns and Portuguese culture is celebrated; there are street parties, food and the bars stay open all night.

As a country with a strong Roman Catholic history, family values play a big part in Portuguese culture, with Sundays designated by most as a family day. It is one of Europe’s oldest countries, and of course, it’s a beautiful part of the world; its climate makes it a popular holiday destination.

Portugal played a large role in the Age of Discovery in the 1500s; indeed they claimed Brazil in 1500, and it turned out to be a literal goldmine. Portuguese influence in Brazil lasted for 300 years until 1822, when Brazil claimed independence.

Portugal had an empire (it was the done thing in those days) with colonies spread across the world, in Africa, South America and Canada, for example. Their exploration developed their culture even more – indeed, today, Portugal is one of the most culturally diverse nations in the world.

On the football pitch, Portugal have often produced cultured players, often with an aggressive streak that can sometimes get them into trouble. Some of the players they have produced down the years – Eusebio, Luis Figo, Rui Costa, to name but a few – would likely walk into any national team in the world.

In a word? Unpredictable. This time round, they are among the sides with shorter odds; as defending champions, and still with the ageless Cristiano Ronaldo to build their team around, they have spent the last 5 years building towards this defence.

Football fans in England will be familiar with a large proportion of the Portuguese squad. The joke has been for some time that it’s basically the Wolves squad – although there are only four representatives from the Midlands this summer. 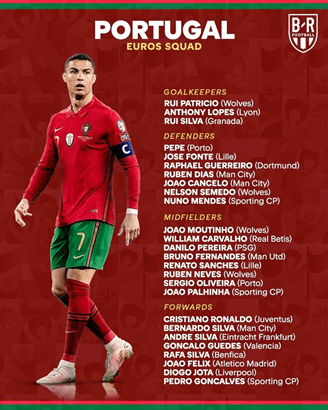 There’s plenty of players with recent experience of winning; Jose Fonte and Renato Sanches have just won Ligue 1 in France with Lille, Ruben Dias and Bernardo Silva won the Premier League at Manchester City, Joao Felix is a La Liga champion in Spain and the Sporting Lisbon contingent of Goncalves, Palhinha and have just Nuno Mendes lifted La Primeira Liga at home in Portugal.

Add to that the trophy-winning pedigree of Ronaldo, the experience of Pepe and Rui Patricio, and the quality of Bruno Fernandes, and you’d have to say Portugal have at least a chance of going deep in this tournament.

That is, provided they escape the Group of Death. The holders being drawn in Group F with World Cup holders France and 1996 champions Germany – as well as Hungary, who are no slouches but you’d expect to be finish firmly bottom of the group – makes for a very tense opening fortnight for the Portuguese. 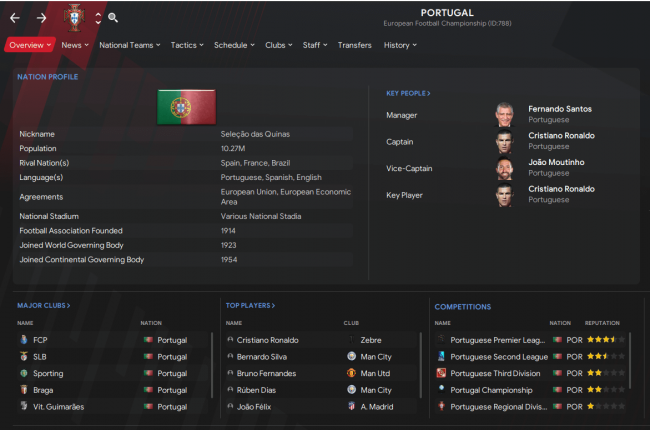 Not getting out of the group is one of the badges of disgrace for a major footballing nation – but one of France, Germany and Portugal will be going home early, so it’s going to be fascinating to see who falls at the first hurdle.

France, as tournament favourites, will expect to progress, which makes Portugal vs Germany one of the biggest matches of the group stage. Saturday 19th June at 5pm – mark your calendars!

Of course, I’d be remiss in not mentioning the manager – this being a Football Manager site after all. Fernando Santos was the manager who led Portugal to the Euros in 2016, and his side also picked up the inaugural Nations League crown in 2019 – at England’s expense.

While Portugal have flirted with a couple of systems in the past few seasons, lately Santos appears to have settled on a 4-3-3, with Ronaldo as the focal point in an attacking sense, flanked by Joao Felix and Bernardo Silva.

Further back, Bruno Fernandes has been pulling strings in midfield alongside any combination of Joao Moutinho, Renato Sanches, William Carvalho or Andre Gomes.

Portugal’s defensive options are as strong as any side’s, with full backs Raphael Guerriero and Joao Cancelo comfortable operating in midfield positions to allow a far more potent attacking threat; Ruben Dias provides the solidity in defence, as evidenced by his monstrous first season at the heart of the Manchester City defence. 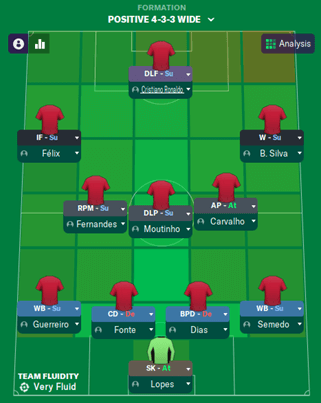 With all that said, Portugal did not qualify top of their group – hence their precarious position by being drawn in the Group of Death. On their day, they’ll beat anyone.

They are surely one of the most dangerous and unpredictable sides in the tournament, and I for one can’t wait to see how this squad – full of success stories, scattered across Europe – pulls together and competes at this tournament.

Can they go on and retain their trophy, and in doing so emulate their neighbours Spain in 2008 and 2012?

Many thanks to FM Scout for the opportunity to write this – you can find more of my stuff at https://shinobifm.wordpress.com.