This summer Spain will be looking to win a record fourth European Championships, which would make them the most successful country in the competition, as they are currently tied with Germany on three.

Their first triumph came in 1964 in Santiago Bernabéu, when José Villalonga’s 3-2-5 formation saw off the Soviet Union 2-1, earning the country their first ever major honours.

It would be a long wait for success on the international stage once again. The drought lasted forty-four years, until Luis Aragonés guided a new generation of talent to victory at Euro 2008 in Vienna, implementing a tiki-taka style replicated by many in Football Manager today.

His squad featured the likes of Cesc Fabregas, Fernando Torres, Andrés Iniesta and Sergio Ramos, players who would form the backbone of the team for years to come.

When Aragonés stepped aside, Vicente del Bosque took over the mantle and raised the bar even higher, first winning the 2010 World Cup in South Africa, before following it up with another Euros success in 2012.

The tiki-taka style of controlling possession and counter-pressing upon losing the ball had now reached unimaginable heights. Seven players started both the 2010 & 2012 finals and so these teams are often described as the greatest ever seen.

Generating a new set of players to maintain those high standards has been difficult. Failure to get past the group stage at the 2014 World Cup in Brazil was swiftly followed by a Round of 16 defeat at Euro 2016 to Italy.

Then in 2018, ‘La Roja’ exited the World Cup at the same stage, to tournament hosts Russia on penalties, in what proved to be a rather forgettable adventure for the Spaniards.

Coach Julen Lopetegui was sacked on the eve of the tournament for agreeing to take over the reins at Real Madrid, leaving the squad in disarray.

Familiar faces such as Gerard Piqué, Ramos, and Iniesta all played a part in that loss to Russia, a game which signified the end of their time as a collective in the national team, with a host of new faces heading to Euro 2020 under boss Luis Enrique.

If you start an FM save with Spain, only 14 members of your initial squad still remain. 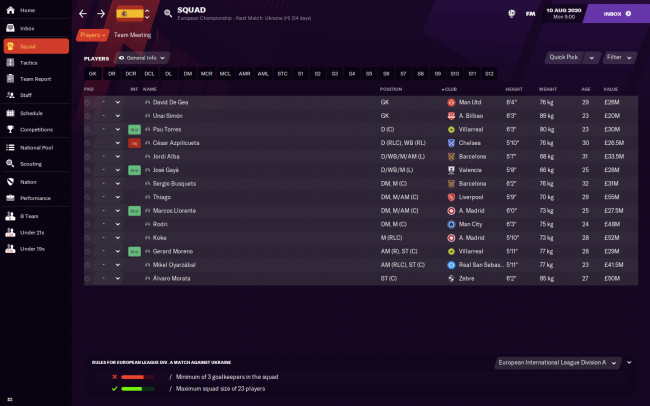 Spain’s way of living is a unique culture in itself, with their famous afternoon siestas and late night dining. The locals love to devour their endless selection of hams, whilst the country boasts some of the world’s best wines.

But don’t be fooled, Spain is a country that lives and breathes sport – whether it be Rafa Nadal at Roland Garros or Sergio Garcia at The Masters, there is a collective pause in the nation’s daily life when their stars are on the screen. It’ll be no different this summer.

Expectations may not be as high as previous tournaments but nevertheless, the telenovelas will be cast aside as events in Seville unfold.

As seen in his Barcelona days, Luis Enrique favours a 4-3-3 system when setting up his side and it’s no different with this current Spain team. What is interesting is that Enrique has toyed with the idea of a Plan B, possibly to use when facing the better sides.

When playing Switzerland in the Nations League, Enrique employed a 4-2-3-1 system on both occasions, creating a double-pivot, a sight familiar to Manchester United fans.

This alteration produced four points out of a possible six, whereas a return to the 4-3-3 system saw Spain annihilate Germany 6-0, appearing to put the 4-2-3-1 plans on ice.

This back-up planning was witnessed again however in March, when Enrique opted for a 4-1-4-1 formation against both Greece and Georgia. A 1-1 draw with the Greeks preceded a come-from-behind 2-1 win over the Georgians.

This experimentation failed to have the desired effect, and so it’s expected that 4-3-3 will be the go-to formation when kicking off against Sweden in the opening game.

Here’s how Spain are expected to lineup: Nothing is set in stone with this lineup, but it would be a surprise to see any of Unai Simón, Pau Torres, Jordi Alba, Sergio Busquets, Koke, Ferrán Torres or Alvaro Morata benched come Matchday 1.

A number of positions are yet to be nailed down, most notably Torres’ centre-back partner and the third man in midfield.

A solid Champions League Final performance from César Azpilicueta could see him deployed alongside Torres in the centre, or even ahead of Marcos Llorente at right-back.

Meanwhile Aymeric Laporte “transferring” to Spain is a lovely gift to have delivered at the manager’s door. The Man City man would surely be a shoe-in to start should Enrique feel comfortable in trusting two left-footed centre-backs. 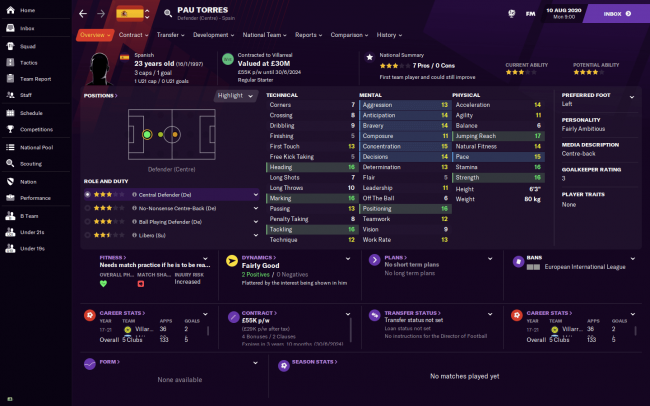 Further up the park, there is fierce competition to join Koke and Busquets in midfield. Thiago and Fabián are serious contenders, with the former enjoying a strong finish to his season at Liverpool, potentially giving him an edge over the Napoli playmaker.

We’ll learn a lot more in Spain’s upcoming friendlies against Portugal and Lithuania.

Wonderkid to watch out for

He’s not exactly a hidden gem for FM players, but Euro 2020 could be the moment Barcelona wonderkid Pedri arrives onto the world stage.

He started both of Spain’s most recent games and with ten goal involvements in 52 appearances for his club this season, would provide the attacking flair not seen in Thiago or Fabián. 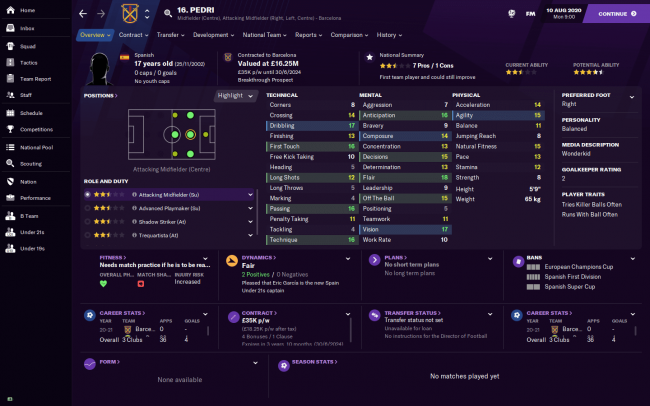 Without doubt, Mr. Spain himself, Sergio Ramos. Injury has hindered his season massively, but from the national team’s perspective, Ramos was an ever present figure in qualifying for this tournament.

He completed three of the four Nations League games at the backend of 2020, and would be the squad’s highest scorer in a national shirt had he been picked.

The introduction of Laporte surely played a part in this decision, but to leave a player of this quality at home feels a lot like many a registration deadline slip up on FM. 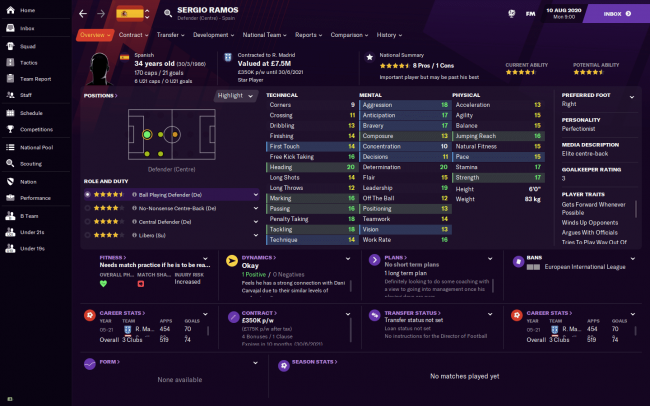 Predictions and Route To The Final

Spain should top their group and win their first knockout game, but it’s the Quarter-Final stage where they will anticipate real adversity. In theory, Spain will face the winner of England v Portugal/France/Germany.

England and France have outstanding squads at the peak of their powers, whilst Portugal are defending champions, with the likes of Bruno Fernandes and Cristiano Ronaldo to call on. Should it be Germany who make it through, then expect Spain to advance (although not quite 6-0 as before!).

Next up would potentially be a Semi-Final clash with the Netherlands, whilst Belgium or France would most likely await the winner in the final. With that in mind, Spain’s destiny will depend significantly on the outcome of Group F, as it could be the difference between a QF exit and a runners-up medal.

Big thanks for reading my Spain Euro 2020 Guide for the FM Network. It’s great to be a part of the site.
If you enjoyed it you can read more of my football articles and the odd FM blog here or follow me on twitter @faolster92.