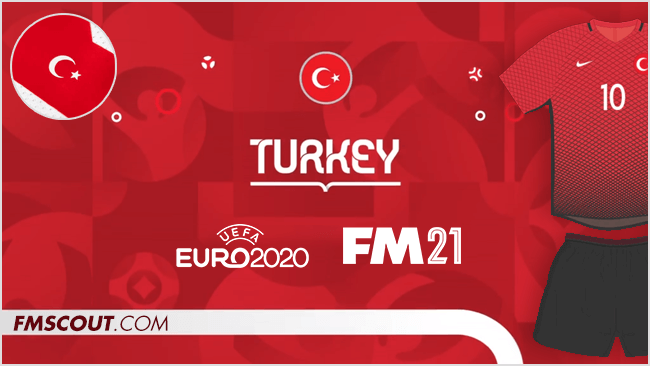 A look at the Turkish national football team going into the Euro 2020 with a touch of Football Manager 2021.

Turkey as #BizimÇocuklar (means “Our Boys”) joins 5 times to UEFA European Championship and wants to play final at Wembley at this time.

Republic of Turkey is established in 1923 by great leader M. Kemal Atatürk by getting a victory Turkish War of Independence after WWI. The capital of the country is Ankara where places middle of the country.

Turkey has one of biggest population in Europe as 83,5 million. The country is in south-east of the continental Europe. 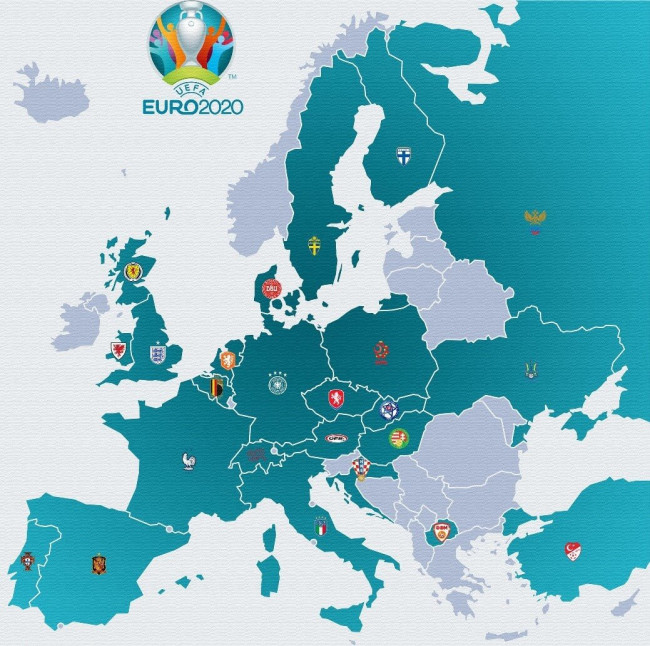 Turkish Football Federation (TFF) was established in 1923 too, but declaration of the Republic of Turkey was not completed those days yet. TFF has been a member of FIFA since 1923 and UEFA since 1962.

In 1950, they qualified to World Cup for the first time, but they had to be withdrawn due to financial problems. But they succeeded to qualify next World Cup in 1954 with an interesting way.

Turkey played a play-off with Spain, and lost first match 1-4, but they won second match as 1-0. On those days, there was no away goal rule.

So, third match was played in neutral place where was Rome. However, this match also finished 2-2 draw. Then a boy had name Franco was called down from among supporters, flipped a coin toss and Turkey qualified to 1954 FIFA World Cup.

Turkey succeeded to qualified a major tournament which was EURO 1996, after long years from 1954. Also, this competition is the first European Championship that Turkish National Team joined. But they had 3 lost and scoring no goals in group matches.

Turkey qualified next European Championship consecutively. In EURO 2000, Turkey was in same group with Italy again, as same as in EURO 2020. They lost 1-2 first match which was against Italy. Second match was against Sweden and drew 0-0.

The last match against host nation Belgium was won by Turkish side as 2-0 and they qualified for last eights. The opponent team was Portugal in this stage, and Turkey lost 0-2 and eliminated.

In 2002, Turkey qualified FIFA World Cup, and made biggest achievement in their football history with coach Şenol Güneş who is the coach of Turkey in EURO 2020. They finished 3rd in the tournament, winning against one of hosts South Korea.

They faced against Brazil in first match and lost 1-2. And they drew 1-1 with Costa Rica and they won last match 3-0 against China.

Third place match was against South Korea. In this match Turkey scored fastest goal of the World Cup history. The goal was scored in 11th seconds. The match finished 3-2 with Turkey’s victory.

In the summer of 2003, Turkey reached third place again at this time in 2003 FIFA Confederations Cup.

After disappointing without qualifying EURO 2004 and World Cup 2006, Turkey had succeeded to qualify EURO 2008 finishing second in eliminations behind Greece who were the champion previous Europe Championship in 2004. Turkey faced Portugal, Switzerland and Czech Republic in Group A.

Turkey lost 0-2 first game against Portugal as always in previous tournaments. But the fairytale was starting after that. Turkey faced Switzerland in second match. They were 0-1 away but they came back and won 2-1 against host nation.

In quarter-final, the opponent was Croatia, 90 mins finished goalless. In 119th minute Croatia lead 1 goal and ready to celebrate semi-final. However, Turks did not intent to give up. They scored equalizer and the match ended 1-1. Turkey won the penalty shout-outs 3-1 and came back third time in row.

In semi-final against Germany, at this time Turkey could not catch the opponent despite of scored first goal, after that fell behind 1-2 but got equalizer 2-2. However, the Germany had a last word and won 3-2 the game. And a fairytale was over.

Turkish native 68-years-old Şenol Güneş has managed Turkey since 2019, re-joining the national team after his stint in charge in between 2000 and 2004. Güneş took Turkey to third place in the 2002 World Cup.

He managed Beşiktaş as last club job in between 2015-2019 and won 2 Turkish Super League consecutively. Also, he succeeded that Beşiktaş finished Champions League Group as leader without any lose.

Turkey was very successful in qualifying group and finished second behind France. They conceded only 3 goals which were all away goals. In two matches against France, Turkey had each one won and draw. 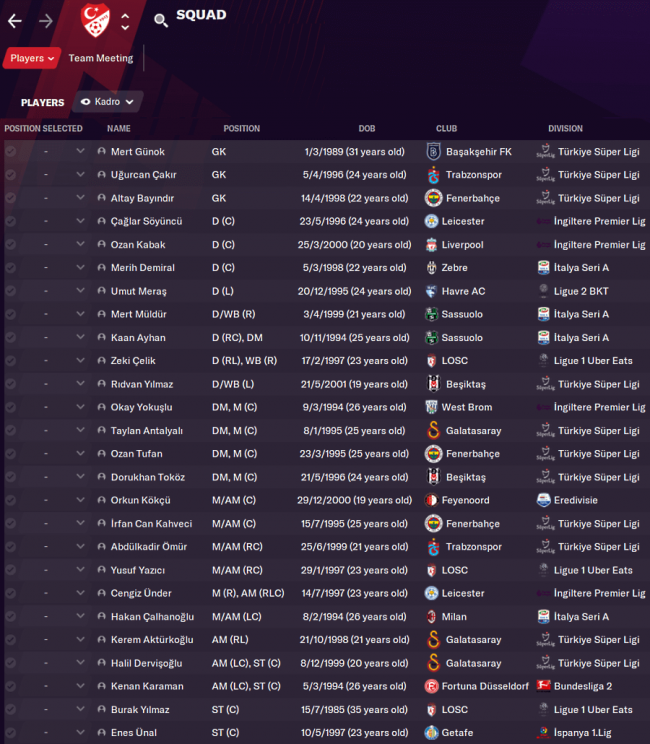 The youngest player of Turkey is left full back Rıdvan Yılmaz (20) of Beşiktaş, champion of Turkish Super League, who is called to national team for the first time. Also, Halil Dervişoğlu(20) and Kerem Aktürkoğlu(21) called for the first time.

The oldest is Burak Yılmaz is 36 and he is captain. The experienced striker won France Ligue 1 with Lille this season, with teammates right back Zeki Çelik(23) and playmaker Yusuf Yazıcı(23). 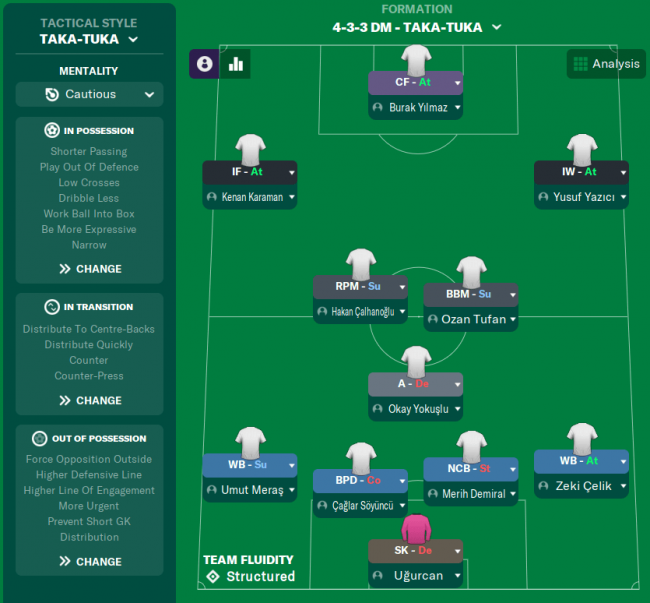 Coach Şenol Güneş has fluent and smooth football style and makes play his team like that way. He likes to use creative players. Also, he wants his players tactical discipline without ball. When got the ball, his teams play smart and goes to goal the shortest way players can.

He likes to play as 4-3-3 formation and likes to use inside forwards. In this tactic, one of wingers is used as false nine usually in left wing with right footed scorer player who is Kenan Karaman.

The key man is Okay Yokuşlu the anchor man playing front of defensive line. The player has fatal duties in defensive actions.

Ozan Tufan plays box-to-box. He helps anchorman in defense to fill gaps and contribute opponent area to support attacking actions with extra passes or false runs. Also, he can dribble effectively and can shoots long distance.

Burak Yılmaz, he is the most experienced player of the squad. He played 67 matches for his country and scored 29 goals.

The playmaker of Milan, number 10 Hakan Çalhanoğlu has many attributes to change a game. The best of his is set pieces. He is the best in Europe. He played 33 matches in Seria A with AC Milan and scored 4 goals, made 10 assists.

AC Milan qualified to play in Champions League in next season after 7 seasons later, thanks to Hakan’s performance. Milan finished the league second behind.

He is the second most experienced player of Turkey squad. He played 56 matches and scored 13 goals for his country.

The most valuable player of the squad. He is the strongest part of the Turkish Wall. He plays for Leicester in Premier League and he was named as part of Premier League Team of Year in 2019-20 season. He is very good in possession, interceptions, ball winning and timing.

Turkey had played in European Championship 4 times of last 6 tournaments. They achieved 1 time quarter final and 1 time semi-final. They are very excited and hopeful for this time because they believe that they can win the championship.

Turkey has very talented team. Most of their players play in European top leagues successfully. They are young but they have played together long time because most players of the squad have almost same ages.

And they have very experienced manager as Şenol Güneş. He knows what they can do and can not. The only disadvantage they have that they are youngest team in EURO 2020.

All their chances are shaped with the very first match against Italy. If they can finish first or second place in their group, they may go to semi-final. If they finished as one of the best third place teams in groups, it will be hard to go further.