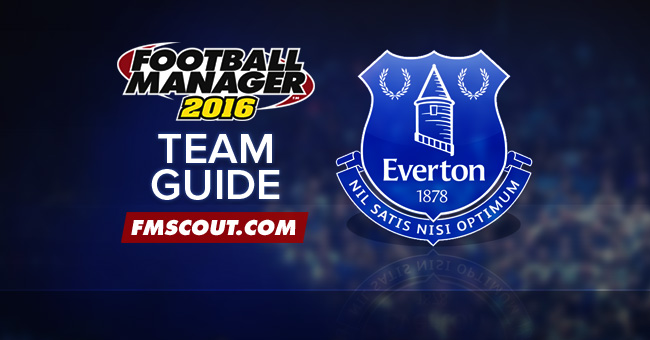 So, you’re interested in starting a save with Everton but would like to know what to expect? Good, you’ve come to the right place.

Upon accepting your new role as boss at Goodison Park, you will be greeted by an injury list as long as your arm, small budgets & the unwelcome news that the “bigger” clubs are circling your best players like vultures.

It’s not all bad news however as, once you dig a little deeper, you’ll find a well-balanced squad of seasoned veterans, some of the brightest young talent in the EPL & a youth set-up that should keep your first team stocked for years to come.

Formed in 1878, & becoming founding members of the Football League in 1898, no other club has spent more time in the English top flight then Everton.

In their record 112 seasons in the top tier, Everton have won a total of 9 League titles & 5 F.A. Cups (amongst other honours) & have one of the richest histories of any English club.

In recent times they have developed a reputation for un-earthing & developing young talent which has allowed them to punch well above their weight, regularly competing for European qualification against teams with much bigger budgets. Speaking of which.

The minimum expectation for the club is to finish in the top half of the league & reach the 6th round of the F.A. Cup. Your reward for agreeing to these expectations? A transfer budget of 2.25M & 31K free wage budget.

If however, you choose to be more ambitious, a Champions League place & an F.A Cup final will see your transfer budget rise to 3.08M & your free wages reach 260K.

A decent jump but is it enough to close the gap on the top 4? 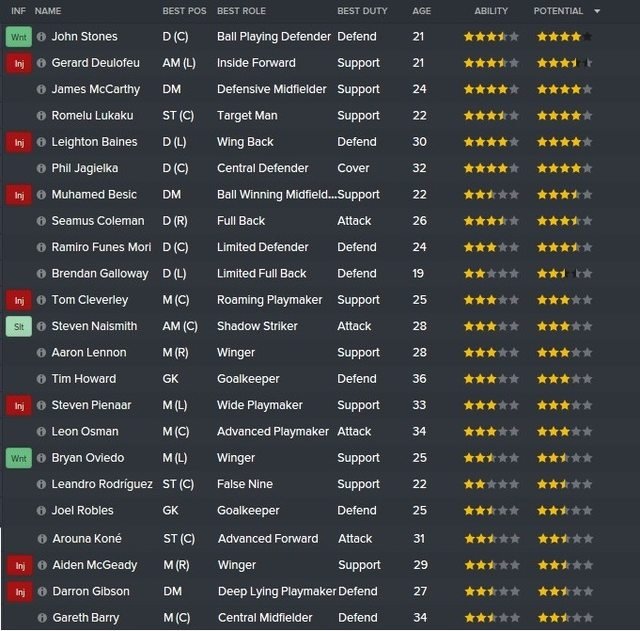 Ok, so once you’ve absorbed the news that the likes of Leighton Baines, Gerard Deulofeu & Muhamed Besic will all begin the campaign injured, you can focus on the fact that, within days, you’ll most likely be receiving multiple bids from the “big boys” for the likes of Ross Barkley, John Stones & Romelu Lukaku. The joys of it all!

If however, you can keep hold of your prized possessions, you will quickly discover that this Everton squad is easily capable of achieving your minimum expectations & perhaps even surpassing them.


The Squad – By Position

This is one position you may find yourself asking; Is that enough? Tim Howard is now 36; he’s had an illustrious career but are his best days now behind him? Sadly the answer is yes, they probably are.

Unfortunately it appears your only other option is Spaniard, Joel Robles. Is he an EPL quality goalkeeper? Personally, I don’t think he is which leaves you with a bit of as problem.

Do you gamble on Howard holding on for another year? Or do you dip into the market?

If you decide to make a move, some names worth a mention could be Timo Horn (Release clause: 6.5M) or Geronimo Rulli (Usually able to approach for fee in January)

Argentinian, Ramiro Funes Mori, is more than capable of stepping in as well if need be & with prospects like Tyias Browning & Brendan Galloway acting as cover, you shouldn’t need to do anything too drastic.

If you would like to add another experienced campaigner, former Villa defender, Ron Vlaar, is available on a free transfer & could definitely do a job for you.

Baines on the left, Coleman on the right. Simple. One of the best fullback pairings in the league, without a shadow of a doubt.

If I was to be critical, Seamus Coleman could use a more EPL ready back-up but game time for the younger guys can’t be a bad thing, can it?

Another position where you should be fine. Names like Ross Barkley, James McCarthy, Gareth Barry, Tom Cleverly, Muhumed Besic & Darron Gibson should provide you, not only with plenty of depth, but also a variety of tactical options to suit almost any shape & style.

With youngsters such as Ryan Ledson, Keiran Dowell & Liam Welsh coming through, the future is looking bright as well.

A tale of two sides. On the right you have names like Deulofeu, Mirallas, Lennon & McGeady.
On the left, just Deulofeu; whose best position may well be on the right, & 33 year old Steven Pienaar; who in all honesty is not quite up to scratch nowadays.

In any case, If you like to play with inside forwards, you’ll easily make do with what you have, as most of your options are capable of switching flanks. If, however, you’re looking for width or creativity you may have to hit the market.

There can be only one choice as your starting forward, Romelu Lukaku! The Belgian International is a beast & at 22 will only improve.

As back-up you have experience (Arouna Kone, Steven Naismith) & youth (Leandro Rodriguez) is that enough? Well, that’s for you to decide.

If the answer is no, you can always try for the likes of Gabriel Barbosa or Cauley Woodrow from Santos & Fulham respectively.

So, as you can see, the squad you will inherit at Goodison is solid & capable.

You’ll have a talented first 11, an excellent crop of youth prospects & a flexible squad capable of adapting to different styles & philosophies.

There are however a few issues you’ll have to address. A lack of depth in certain areas, the on-going attempts to lure your best players away & a crippling injury list, just to name a few.

Assuming you can address these issues though (remembering the small budgets) you could easily be looking at a Euro Cup spot or, with the right mix of luck & skill, even cracking the top 4.

This is where interest in your players could be of use. If you are so inclined, you could easily sell the likes of Barkley, Lukaku & Stones for 30 – 50M a piece & use the funds to build that team of wonder kid’s you’ve always dreamed of. The choice is yours!

Everton have a fairly well rounded squad that could be used in a variety of different ways. 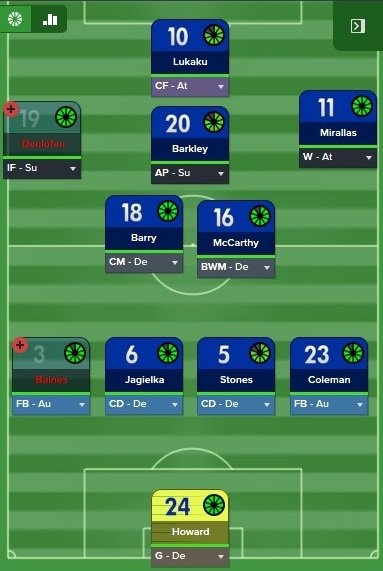 This formation, for the most part, will allow you to play your best players in their preferred positions & roles, whilst also maintaining a good balance between attack & defence.

A 4-1-2-2-1 may also work well with the midfield anchor allowing your fullbacks to get further forward in the knowledge that the central pair will still have adequate cover from counter attacks. 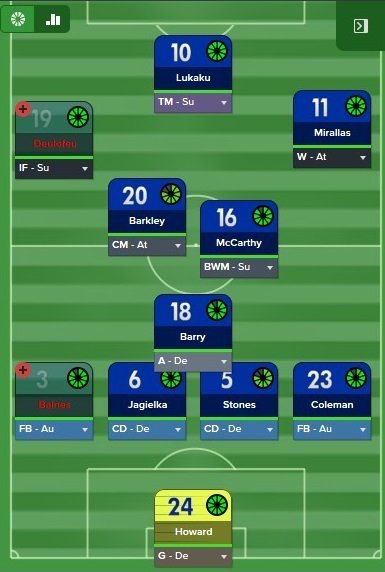 So, Everton are a squad that face quite a few issues in the beginning.

The lengthy injury list in itself may be enough to turn people away, let alone the prospect of having to constantly protect your best players from the advances of the bigger clubs & keeping everyone happy in doing so.

Don’t be put off though, as once you’ve made it through those first couple of months, you’ll find yourself with a talented squad, reasonable expectations & the flexibility to stick with what you have or sell off some assets & build the team of your dreams. Really, what more could you ask for?