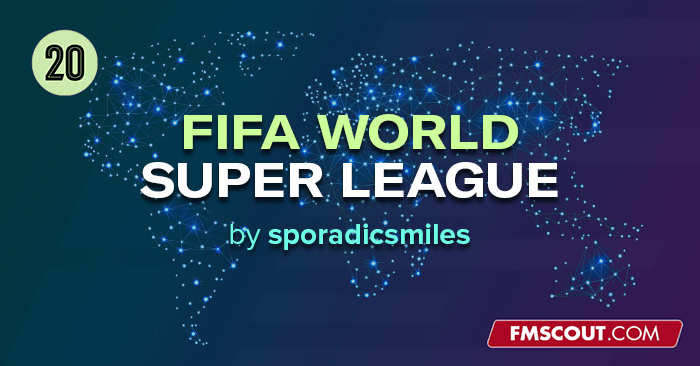 This database is created by sporadicsmiles and initially posted on SI forums. I'm sharing it here with his kind permission.

Ever since we have had a pre-game editor, we have had super league files. Where the biggest and best clubs in the world are pitted against each other. The idea of being able to play such a league has always been a draw (although less so in recent years it seems). The one thing you can note about almost all super league type files that have existed previously is that they are generally Europe centered. Which entirely makes sense, since most of the big clubs in the world are here. However, this means they lack that ... exotic touch. You play the same teams you would play in the UCL, just more often. They are challenging, but somehow they always feel the same.

This is where I come in. I have pondered this for a while and I have tried to make something a little bit more unique. Something that is more interesting, and at the same time more challenging. One of the issues with older super league is that there was very little incentive to manage an African team, or an Asian team. You had a very low ceiling without being able to invest immense amounts of money. It was very challenging, but ultimately futile. You were unlikely to get TP Mazembe to the top flight. This may be a nice challenge for those who enjoy these things, but the majority of players probably do not. So I have made something entirely different, which I will describe now.

The new take on the super league Idea.

How to stop a super league being dominated by European sides? Well, my idea is to have 4 parallel streams running throughout the pyramid. These four streams will join in the first two level of the pyramid to create a global championship. Those four streams will be continents; Africa, Americas (North, Central and South), Asia (with Oceania) and Europe. I had dreams of a pyramid that looked like this: 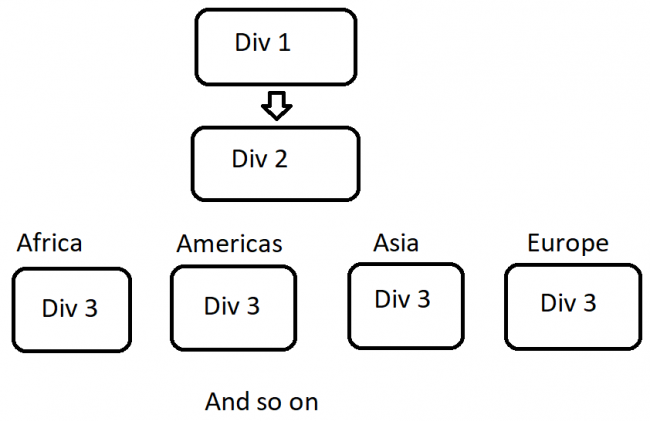 Where we separate into pyramids based on regions after a certain level. But then, how to ensure that the top two divisions are not just populated by European sides after a few seasons?

Well, the idea is to keep the regionalisation all the way to the top. The top two divisions are composed of 24 teams, 6 from each region I have defined. Games are played between all teams, but relegation and promotion remains regional. So 1 team from each region is relegated and one promoted. So the top two divisions will have 6 teams from each region. Forever. Suddenly, playing as an African or Asian team does not seem so bad. There is a path to the top, where you will have to beat similar teams before you get to play with the big boys. Something that is balanced and challenging for all continents. A truly world wide super league, that will stay so forever. 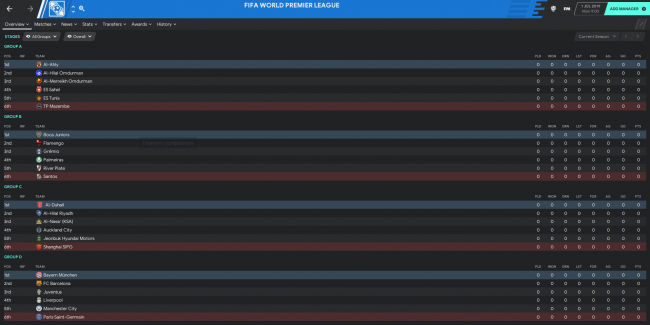 Here you start to see the idea. There are 24 teams split into 4 groups of 6. Group A is for Africa. Group B is for Americas. Group C is for Asia. Group D is for Europe. Each group has one playoff spot (we will get there) and one relegation spot. So in Europe one of those very big teams will get relegated.

The games are arranged so that each team plays the teams in its group twice, and the teams in each of the other groups once. Which gives a total of 28 games. This is going to lead to a lot of easy games for European sides, but the dynamic is super interesting. You cannot afford a bad result as a European side, when the group will be close. You have to win the games outside your group. A draw with ES Sahel could see you relegated. The games within your pool are also absolutely vital. You want to stay up? You have to win the games in your pool. This is true of all pools.

There end of the season tournament to decide the champions. Each group winner earns a place. So you have a representative of every group. So every team has something to play for. You should be involved in a relegation scrap or a battle for a playoff place. No midtable obscurity here! In addition, the best 4 teams who have not already qualified as group winners will reach the playoffs. There is a overall league table which covers this. In reality, for the first few years expect this to be all the European sides who are not relegated to qualify. But there is the chance to improve and get here as another side, if you can do well enough. The playoff is a seeded draw (that does not work properly yet, sorry) straight knockout, with one leg. Seeded by being a group winner, and then by your league position.

This works in exactly the same way as the Premier Division. Except I did not make an end of season playoff (maybe I will add one for group winners). The way the fixtures works is identical. No more to add.

Here we regionalise fully. We get four separate groups of 16 teams, where you only play games within your group. So African teams play African sides, European sides play European sides (and so on). So the challenge remains. Everyone will be quite equal in ability (well, more or less. I use a website with club rankings, which can throw up some interesting weak sides who get pasted. I will leave them, since they clearly earned their ranking). This means that you are always in competitive matches. More, there is one promotion place for 16 clubs. This is the absolute hardest division to get out of. Three teams are relegated from each group. So it is a little easier to get out that way! Here are the leagues. 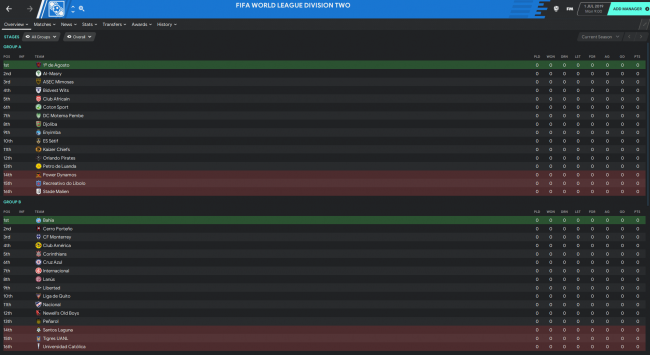 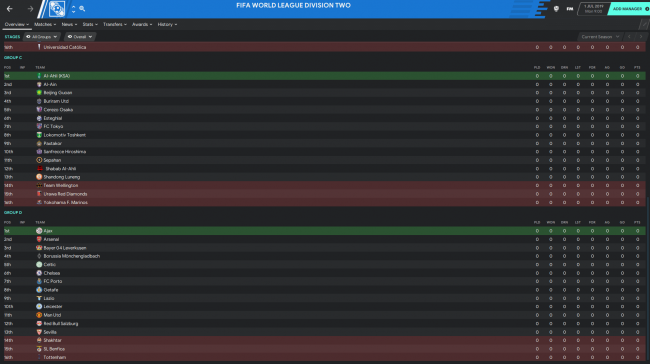 This works exactly like the second division in every way, except there are 3 promotion spots. 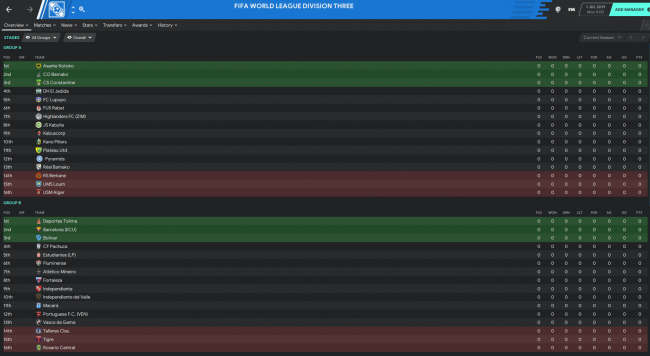 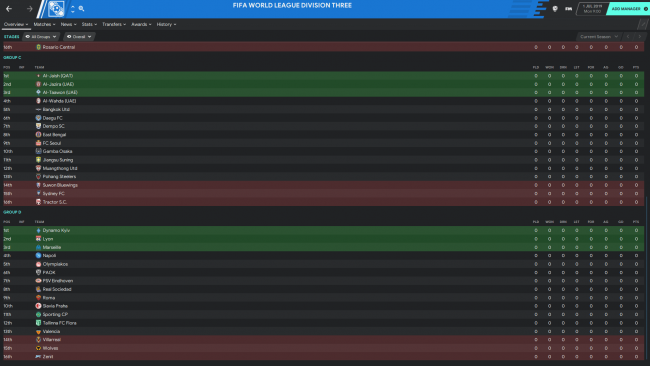 This is the same as the third division, in every way except the teams, obviously. 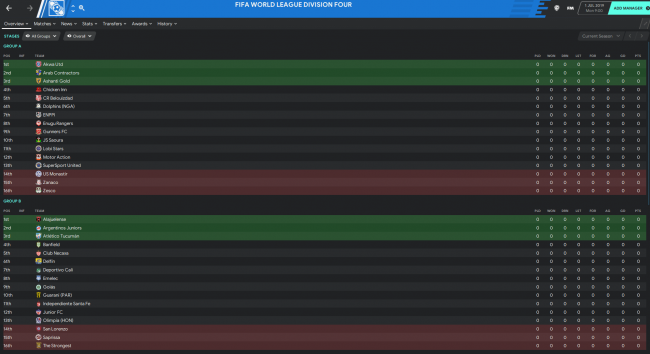 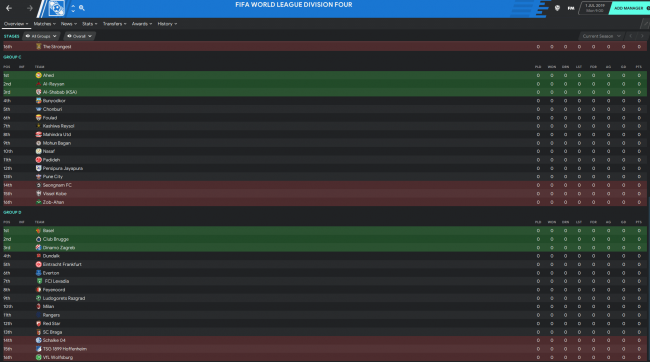 What is that weird Fifth Division?

In all honestly, it is a hack to make sure I get the correct teams promoted into the fourth division, which is currently the lowest on the pyramid. It is not playable, and you should not try to play in it. I needed active sub divisions to separate teams for relegation and promotion between the fourth and fifth division. So these are just dummy competitions. Nothing matters here. The 12 teams who are selected for promotion can be found here, if you want to check early. They are selected at random from a large pool, but this is the hack I have found to make sure I can ensure 3 promotions from each region. Not beautiful, but it works. You can see I am used to back end programming.

I am not going to screen shot them all, because I do not have them drawn in the example I have been using. There are 6 cup competitions.

This is a straight knockout tournament between all teams in the pyramid. The leagues are progressively added in round by round. The lower division side plays at home. Which makes the competition more difficult to win the higher up the pyramid you are. You have to play away against potentially very strong opposition. If you win this regularly, you are a god. Or very, very lucky with the draw.

Each competition has a cup competition just for teams in that level. This is to pad out the season a little bit.

For the Premier and First division, there is first a group stage with 8 groups of 3 teams. Group winners go into quarter finals, which are two legged affairs all the way to the final.

For the Second to Fourth Division, there is a straight knock out competition. So at least you get to play the teams in your league but not your region.

The problems I still have.

Fixture dates simply do not work, for some reason. And the game is assigning fixtures very weirdly. I had one example of a team with 41 days between games. I have tried my best to get rid of this, but if you see it I am sorry. It is a bug, I think, and there is limited things I can do. If it is a severe issue, I will manually add season dates. This also means all games are generally played at the same time.

I have not checked in a very detailed way how well balanced the leagues are. I want to make every team rich, so eventually African, Asian and American sides can catch up with the Europeans. I have not had the time to run a long term test on this. So it could be a little iffy. At least nobody seems to go bankrupt. It will take a long time to build up all the teams anyway.

There are a lot of teams without many players in the database. Which sucks. If you can find player packs, you can try them (I may see if I can adapt my Africa Extended file to be compatible).

Probably many more. You can let me know if you find them. I plan to continue working on this. Let's call this a beta.

What I still plan to do.

- There are U23 and U18 leagues, which mirror the parent divisions. I would like to make these into separate pyramids so they have promotion and relegation independent of this.

- I am considering adding playoffs at all levels. At least that way we get league winners. However, it was not critical for me to record this below level 2.

- I may look at adding extra teams. I have 5 levels right now because the teams worked out nicely in the cup. In principle, now I have this working, I can add as many levels as possible. If I find a convincing and reliable way to do further regionalization, I will think about adding that.

How to install the FIFA World Super League in FM20

To install, save the file to "C:\Users\Your username\Documents\Sports Interactive\Football Manager 2020\editor data"

Select the file when you start a new game.
Then you want to select Gibraltar.

You MUST select the fifth level even if you do not use it. This ensure teams stay separated properly.