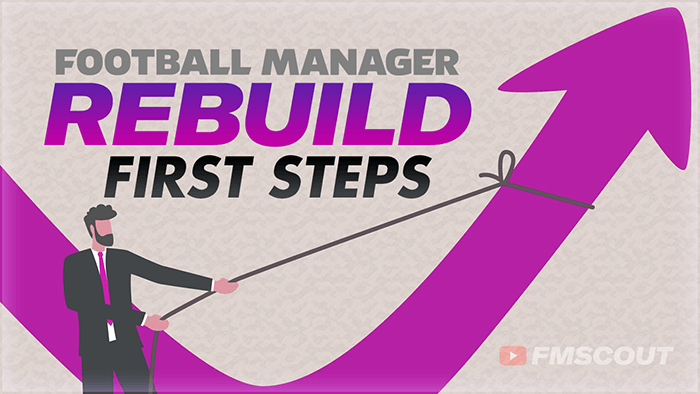 The first weeks as manager of a new club you are looking to rebuild can be pretty overwhelming. With so much to do in such little time, it's hard to know where to start and what to focus on first.

In this brief article, we hope to provide an easy to follow roadmap to get your rebuild running smoothly.

Firstly, head over to the competitions tab, select your league and hit the season preview button hidden under the overview option.

This is brilliant for giving you a rough guide of where your team is compared to other clubs in the league, providing an idea of how high you should set your ambitions at the start of the season.

Chances are if you are a mid table club, title glory might not be an appropriate aim in season one, as the famous quote goes “Roma wasn’t built in a day”.

The season preview tab is particularly handy when you are new to a league/nation and want a rough guide of who the best and worst are in the competition.

Next, have a quick check of your finances and budgets available, and get right onto those transfer clauses. If you have any that you can sell, it’s nearly always a good idea to do so.

Chances are 100K will do you more good now than 300K four seasons down the line. Of course weigh up your options before selling a clause for quick cash, but this can be a massive boost in kicking off the rebuild.

Sort out your staff

As much as rebuilding a club is about players and infrastructure, never underestimate the power of your staff.

I will always check the staff page and identify any major weaknesses in key roles (i.e Head of Youth development or Director of Football).

From there you can spend time finding the best staff available for other roles in the club, but personally I like to delegate these jobs.

If you have a good DOF or Technical director in place, go to the staff responsibilities tab and allow them to recruit staff for you, they always do a good job in my saves. Before you know it, your staff will be top notch with minimal effort on your end.

Whilst you're there, check out the other responsibilities too and delegate any tasks away that you don’t fancy, this will save you plenty of time in the long run.

Before we sign players, we want to know what system we are going to be looking to play. Tactics can be a sore point for some, many believe you should create your own and some use the provided presets.

Both are great and you should do whatever you feel, however I will always suggest looking at which preset has been given the ‘thumbs up’ by the game before choosing a tactic.

This will give you a rough idea of formations your squad will suit and allow you to choose a preset/create a tactic that fits the players within your team.

Now it's time to check out your playing squad, head to the squad screen and figure out your best players, the worst players, the guys with high potential and the guys who are sucking the life out of the wage budget.

Every club will be different, but from here with the information we have gathered, you will begin to get a clear idea of who can be sold and where the biggest improvements are needed.

The assistant report section as well as the squad depth screen are great at showing what your team may lack, and also showing where there may be some deadweight in the squad to sell.

It may not be easy to sell players in the first transfer window, but do what you can.

I always suggest selling before you buy, that way you wont start the seasons with a bloated squad of players crying about gametime.

Once you've done all of this, you will have a great springboard to begin your rebuild from.

Scout players for specific positions/roles you are lacking in, begin to shift off the deadwood players and finalize your tactical style.

Now you are ready to go, as you attempt to hopefully bring your club to glorious heights and begin a new era of success and dominance (or get sacked by Christmas).


Alternatively, you may watch the relevant video.