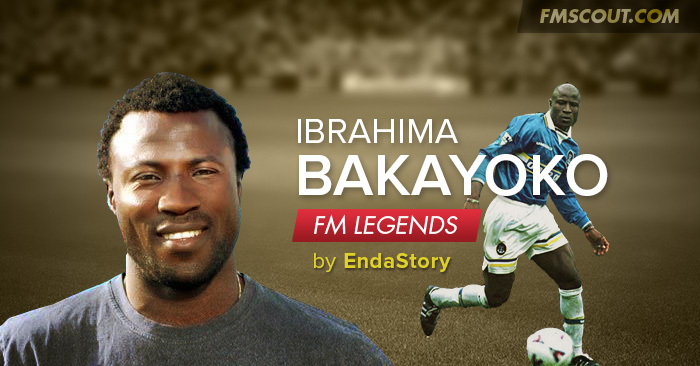 Ibrahima ‘Baka-joke-o’ was the cruel sobriquet the former Ivory Coast international acquired during a spell with Everton when he scored just four times in 23 appearances. It’s hard to reconcile the lummox the Toffees found themselves lumbered with to the international who scored 30 goals in 45 appearances for his homeland.


It’s impossible to reconcile him with the absolute gem he turned into on CM 97/98. Skillful, prolific, talented; everything the real thing wasn’t, the video version was. At the age of 20, Bakayoko possessed high ratings. High teens for shooting, pace, dribbling; this was a player going places and we all took him there.

With 20 for Influence, the Ivorian was a player we all signed and watched gleefully as he delivered finishing, goals, and creativity to levels which would make Maradona weep. The blot on his copybook was a degree of being injury-prone. That too was in the high teens and would rob you of his services at key times unless he was carefully managed.

He was never the cheapest player to buy; £5m or so but it wasn’t until later in his career that he made it to the front page of the scouting search when sorted by value. 
It’s at this point that truth becomes stranger than fiction. After leaving Ivory Coast club Stade de Abidjan, Bakayoko joined Montpellier. He netted 12 in 64 for Stade and 25 in 75 for the French side; so far, so ordinary.

The twist in the tale came when he signed for Everton. There were rumours at the time that the Merseyside club used the CM database as part of their scouting routines, to identify players worth following up.

Naturally, Bakayoko fitted that bill. Except for all his ability, he was never as quick or prolific in real life. Any rudimentary scouting trip would have reported back that fact. Unless the Everton scouts happened to pick a day when he scored a couple of goals.

Whatever happened at Goodison Park, the club signed him in a £4.5m deal. Twelve months later he was back in France with Marseille with a queue of Blues fans waiting to drive him to the airport.

He meandered through the rest of his career with the name of Bakayoko adorning club shirts in Spain and Greece before finishing with French fifth-tier side Stade Bordelais. His star shone brightly and fizzled all too briefly in football but he will always be a Championship Manager legend.