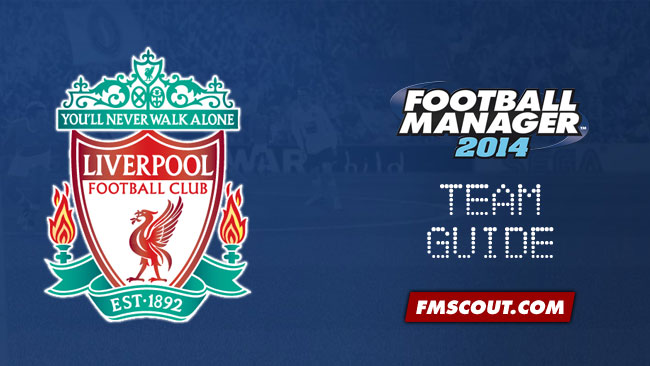 Liverpool FC
Whilst Liverpool may not have had masses of success in recent years, many have been left in awe of their fast paced, passing football. This has only started to be noticed since Northern Irish manager Brendan Rodgers took charge at Liverpool. Now it is your decision - do you carry on Rodgers' style of play, revert back to before or try something completely new? It is entirely your choice in Football Manager 2014. However, this guide will hopefully give you a few hints and tips to give you an idea of how to start.

You will start off with a very healthy budget to spend on players but with the American owners, who do not like to splash the cash in real life, you should still be wary of how you go about your transfer dealings. Under Rodgers, Liverpool seem to have had a good transfer policy, bringing in some high quality players, as well as some exciting young prospects. If you are looking for a good policy in game, this would be a great one to follow. When you start the save, you are offered a £15 million budget, with the expectation of qualifying for the Europa League. However, in the first board meeting, you can decide whether or not to question the amount you are given. If you do so, when you return to your inbox, you will receive a message from the chairman asking if you wish to change the budget. In addition to the £15 million budget for qualifying for the Europa League, you will then be offered £19.5 million if you tell the chairman that you think you can qualify for the Champions League and a £21 million budget if you tell him that you believe you can mount a title challenge. However, you will be judged upon your expectations throughout the season, so choose a budget that you think you will be able to work with but one that also allows you a little room for error if you don't have the perfect season. The Europa League is probably the most realistic, so if you are a new player, or have found Football Manager games difficult in the past, then stick to this.

One of the most important things that you need for a successful career on Football Manager is a good tactic. Keeping one tactic throughout a whole save will not be very effective but here are just a few that should work ideally to start off with.

Tactic 1 - 4-1-3-2
When choosing your tactic, this should be one of the formations that is high on your list of priorities. If you tweak it well, it could be capable of beating many Premier League teams. Despite not utilizing any wingers,(Liverpool often use these in real life) it allows for a strong, central formation with a defensive midfielder role available, a position that a host of Liverpool players can play. This could work well with the 'control' mentality because there are three central midfielders.

Tactic 2 - 4-1-2-1-2
Whilst the 4-1-3-2 is a slightly more relevant formation, the 4-1-2-1-2 is also a good one to use. Once again, it uses a defensive midfielder, but this time also allows room for an attacking midfielder to play in, offering support to the strikers. You may choose to use the 'attacking' mentality with this formation because of the options that are up front.

Tactic 3 - 4-3-1-2
This is another good option to use. Offering a good central base with the three central midfielders, it also lets you play with an attacking midfielder, allowing you to play controlling, forward thinking football. An advantage of having three central midfielders is that it should give the opponent minimal chances to get through your side but it also gives you the opportunity to break on the counter attack.

Now that you have some strong ideas for tactics, you will have to make the tough decision of who to put into your starting squad. To make the decision, look at the tactic you have chosen and then take a look at the players position. However, do not rule out signing people because they do not fit the tactic. You may change the tactic and then the opportunity to sign the player may have passed. This is a brief analysis of all the roles you might wish to fill, and a look at your squad in general.

Goalkeeper- This position is really lacking in depth at Liverpool. However, there is one top quality goalkeeper in the squad - Simon Mignolet. The 25 year old Belgian international had a brilliant season for Sunderland last year, earning himself a £9 million move to Liverpool in the summer. He will be key to your chances of success in the game. With Pepe Reina out on loan to Napoli for the season, your second choice goalkeeper will have to be 31 year old Australian Brad Jones. He was criticized by many last year after conceding three goals in a shock 3-2 defeat for Liverpool against Oldham in the FA Cup and had made many mistakes already in previous games. He should be your last resort so you should try to keep Mignolet fit at all times.

Left Back- Before this season, the left back position was also lacking in depth. However, the loan signing of Frenchman Aly Cissokho has added both depth and quality to the side. However, whilst he is a quality player, 27 year old Spaniard, José Enrique, slightly edges it. The squad also has promising left back Jack Robinson out on loan to Blackpool.

Centre Back- Liverpool have recently strengthened this position with the £18 million signing of French international Mamadou Sakho from PSG. They had a quality central pair anyway with vice captain Daniel Agger and Martin Škrtel covering. Agger, 28, would be the best option to play alongside the slightly better Sakho but either of the two should be suitable and effective enough to keep out quality teams. Experienced defender Kolo Toure should provide cover if needed. In terms of upcoming talent, there is London born Portuguese player Tiago Ilori who looks to have a bright future. You may be better off loaning him out for the season, allowing him some much needed experience.

Right Back- English international Glen Johnson is your best player for this role so should definitely be first choice. Your backup defender would be Martin Kelly with Kolo Toure being versatile enough to play in the position at a last resort.

Left Midfield- Despite none of the suggested formations utilizing wide men, it is still important for you to know your options. Starting with left midfielders, Aly Cissokho is your best prospect, although this isnot the greatest position in terms of quality, hence the reason why it is not utilized in the formations.

Central Midfielders- England and Liverpool captain Steven Gerrard is one of the key players in the squad. He will be the centre of all things that go on in the midfield and it is imperative that you use him as much as possible. Lucas Leiva can play in the centre of midfield but he would best serve you in the role of defensive midfielder. This leaves two other players that can play central midfielder - Jordan Henderson and Joe Allen. Both fairly young, if given game time, they are sure to develop quickly. In the attacking midfielder role, you should look to use promising Brazilian Coutinho or new signing, Spaniard Iago Aspas.

Right Midfielders- Again, wide men are not the strongest in the squad but if you are to use them, your best bet is to move Steven Gerrard out to the right. Alternatively, you could give bright prospect Raheem Sterling a run in the first team but beware that he does not prevent the team from doing their best.

Strikers- In recent weeks, Liverpool's strikers have been given the nickname 'SAS'. English striker Daniel Sturridge and controversial Uruguayan Luis Suárez make up 'SAS' and they have been practically unstoppable together. Both are players full of trickery and skill and are sure to throw up a quality bit of play to help out the team. Other players that could fill the role are Iago Aspas or Luis Alberto.

Position 1- Goalkeeper: To improve the lack of depth in this position, you may want to take a look at Arsenal goalkeeper Wojciech Szczęsny. The 23 year old from Poland has been a key figure for Arsenal in the past couple of seasons and given his age, looks like he could develop into a world class goalkeeper. He could provide good competition for Mignolet and will definitely be a more reliable second choice goalkeeper than Brad Jones.

Position 2- If you are looking into signing wingers, you may want to get your scouts to check on West Bromwich Albion wide man Chris Brunt. He has been a reliable player for the Midlands side for a long time, a vital part in their rise up the table in recent seasons, including an 8th place finish last season.