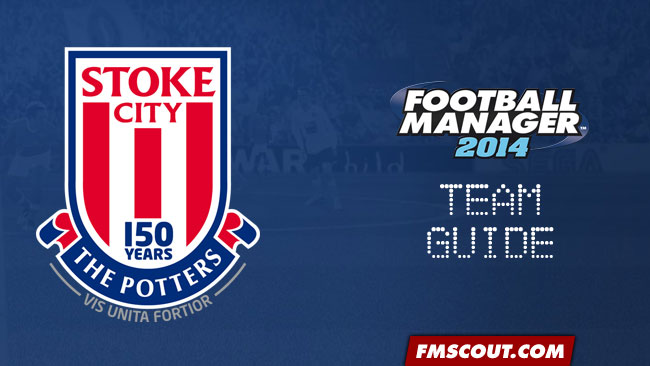 Stoke City
Stoke City have been a team famous for their ‘hoof-ball’ style in the past, playing with quite strong, tall players. Now under the reign of Mark Hughes, they have begun to change how they play, into a more elegant, but by no means Barcelona, like gameplay. It is up to you in FM to decide whether you wish to continue the long-lasting tradition, or mix things up. This guide should help you no matter your style.

You get a fairly low amount of money to spend at the beginning of the season, and you have fairly stingy owners, who might not be willing to pump money into the club should it fall into any financial troubles, so you should be careful with your money. In the past, Stoke used their transfer budget on established players, rather than youth, but in FM it would be a cardinal sin not to even consider buying for the future, for a team, which is fairly old. When you start the save, you get 3 choices of budget, Avoid Relegation (£3.8M), Finish Mid-Table (£4.7M) and Top-Half Finish (£5.25M). You should comfortably avoid relegation, but finishing in the top half might be quite difficult, so only use that option if you an experienced player. For everyone else the mid-table finish should be the best option, despite how low it looks for a team in the top flight.

The first thing you should do when starting a new save, is take a look at the tactics you wish to implement. Obviously, keeping the same tactic all the time is not effective, but for starting out these should be ideal.

Tactic 1- 4-1-2-1-2 Balanced
This should be your primary tactic when starting off, as it will be useful for playing mid table teams in the league, who will account for most of your opposition. It utilises your strength in wide areas, and gives you good defensive cover.

Tactic 2- 4-2-2-2 Fluid
This will be your tactic when playing a side of considerably low quality than yours, such as teams in lower leagues. It is much more attacking, whilst remaining strong to cut off those potential counter attacks, which so often ruin the day. One of the two central midfielders should be more defensive based, while the other is more creative. The Fluid style allows the creative player to spread play easier, allowing for more potent attacks.

Tactic 3- 4-5-1 Rigid
This is your tactic against the big boys in the league, as it is focused on a solid backline, and speedy counter attacks, which will generally be your best way of playing larger sides. This will be used in a more rigid style, to make sure your players stick to their positions, which decreases the chances of conceding massively. This formation packs the midfield, and aims to stop the opposition’s creative forces.

Now you have your tactic, you need to decide the players who will be playing in these roles. To make this decision examine your tactic to find the best player for each position, and only look at those specific roles. For example, just because we have listed all positions here, there is no need for you to buy a CAM if none of your tactics utilise one. This is a brief analysis of all the roles you might wish to fill, and a look at your squad in general.

Goalkeeper- Between the posts you have several, very good options. First choice for the season should be Asmir Begovic. The 26 year old, Bosnian international, had an outstanding season last year, winning Stoke’s player of the season. This has reflected in FM, where he is one of the best players at your disposal. Thomas Sorenson should act as more than able cover, and you have one of the league’s most promising goalkeeper in Jack Butland, who is trained properly, and is given enough game time, should be a future England regular. Try to send him on loan until you feel you can provide him with at least 25+ games a season, to help his development.

Left Back- The left-back role has recently been strengthened by Stoke, with Dutch international, Erik Pieters joining the ranks. He should be your first choice, but in terms of backup you have two main options, with Marc Wilson, predominetly a centre mid, or Marc Muniesa, predominantly a centre back, both able to play there. If you have any money left over however, look to sign a youngster in this role.

Centre Back- Stoke are famed for their solid back line, and in your centre backs you have one of the best players at the club, in Ryan Shawcross. Your 26 year old captain is a rock at the back, and you should try and avoid selling him, despite the offers you will receive. Assisting Shawcross, is Robert Huth, who may be slightly older, but is still just as capable. For backup, young summer signing, Marc Muniesa, will be a great option, as he should grow into a very good player, and versatile American, Geoff Cameron should do well, if placed in that role.

Right Back- This position is the weakest out of the defence, and requires immediate attention. The only option is Andy Wilkinson, a 29 year old, who although is decent, is not capable of holding down that role by himself. As you lack cover, this should be the first thing you look at in the transfer market.

Left Mid- This area is another place where you could potentially strengthen, with your main option only on loan. Assaidi is the best man in the Attacking Midfeidler Left role, however, if you are planning to play with a LM and RM it might be useful to get another player in, to challenge with 23 year old Brek Shea, who is more capable defensively.

Centre Mid- You have a plethora of central midfielder options available to you, both defensive and attacking. Steven N’Zonzi should easily be first choice CDM, and is also a decent centre mid. If you are playing with CM’s, you should also consider Wilson Palacios as your first choice, as he can do several jobs for you in that role. Finally, Stephen Ireland or Charlie Adam are your best bets in CAM, but as Ireland is only on loan, and Palacios is fairly old, another player might come in useful.

Right Mid- Stoke’s big signing during the summer was Marko Arnautovic, a Austrian international, who, is played correctly, could become the focal point of your attack. Despite his arrogant nature, he will be a very good attacking outlet for your side. For backup, Jermaine Pennant is the only option, but should only be used in rare occasions, due to his defensive nature.

Strikers- Stoke are infamous for their strong, tall front men, and you should be able to use this to your advantage. Peter Crouch was great in FM13, and is still very competent in 14, if you get crosses into him, despite his age. You have a lot of players competing for the other role up front, with Jonathan Walters and Kenwyne Jones, the ones you who should consider. You can also play Arnautovic up front, but you will have to change your style a bit, to suit his play style.

Now that you have established which players will fit into your plans, and who won’t, you now need to decide how you are going to improve your team. Obviously there are some weak spots in the team, so here are some options for players who you potentially might be interested in signing.

Position 1- Right Back One player who you might be interested in is Charlton fullback, Chris Solly. The talented 22 year old has attracted interest from several Premier League clubs, and could provide good competition for Wilkinson. Due to his age, he could easily grow into a very solid fullback for the price you paid for him, so definitely consider having a look.

Position 2- Left Mid There are several options for this position, one being Llyod Isgrove, a talented 20 year old, who currently plays for Southampton. If you can draw him to Stoke, he could improve your wide options massively. On the other hand, if you are cash-strapped, you should consider signing Wilfred Zaha on loan from Manchester United.

Position 3- Centre Mid If you are able to sell some players, and have some extra cash, have a look at Swansea midfielder, Leon Britton, who is a very capable CM, is available for just under £3M. Despite his age, he brings a lot of quality and variety into the side for a low price.